Mr. K is a businessman with a history of hypertension, myocardial infarction, smoking, hypercholesterolemia, and impotence who first presented at age 58 with action tremor and gait imbalance. Mr. K. had 1 alcoholic drink per week, and his family history was notable for tremor, heart disease, cancer, infertility, and developmental delay. Neurologic examination showed mild upper extremity intention tremor and gegenhalten, moderately decreased vibration in his great toes, and that he could take no more than 4 consecutive tandem steps. Cognitive testing showed his reasoning ability to be average to high average, but he had mild difficulty with short-term memory and speed of information processing. A T2-weighted brain MRI revealed moderate white matter hyperintensities involving the middle cerebellar peduncles, pons, and cerebrum (Figure) and generalized volume loss.

At age 62, Mr. K.'s wife reported the development of disinhibition and irritability, which improved with venlafaxine; his balance and hearing had deteriorated slightly. On examination, he had more generalized gegenhalten, mildly diminished deep tendon reflexes, and he was unable to perform 2 consecutive tandem steps correctly. Neither he nor his wife noticed cognitive problems. 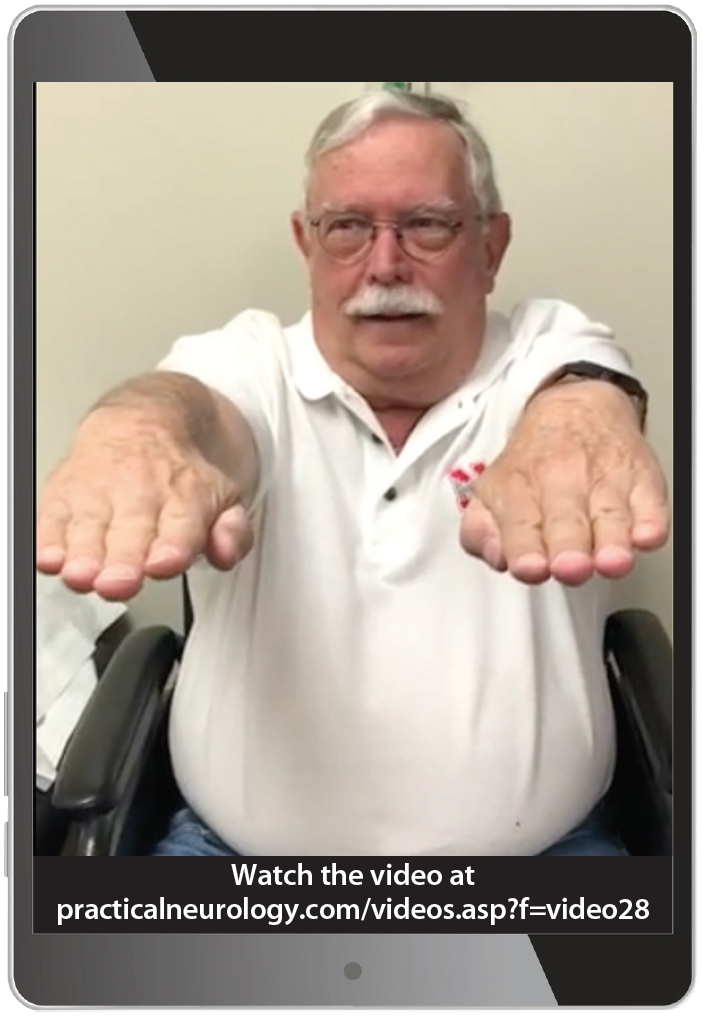 At age 67, Mr. K. was having occasional falls and using a cane or a wheelchair. At age 72, as shown in the video of his neurologic examination, Mr. K has significant cognitive problems with disinhibition and irritability, frequent falls, poor stamina, urinary urgency, mild constipation, and vague visual complaints. Saccadic but full extraocular movements are present. He has mild to moderate dysmetria of the upper extremities, dysdiadochokinesis, and mild intention tremor. Although trace patellar reflexes are present, ankle reflexes are absent. His great toe position is impaired position, and he has markedly diminished vibration. Mr. K.'s gait is wide-based, slow, and cautious with irregular step placement. He cannot attempt tandem gait and has an 18 of 30 possible score on the Montreal Cognitive Assessment.

Mr. K. has a sporadic, chronic progressive, late onset cerebellar ataxia disorder with additional features of cognitive decline, behavioral changes, peripheral neuropathy, and autonomic dysfunction. Pertinent negative features include absence of parkinsonism or significant visual findings. Differential diagnosis of cerebellar ataxia can be narrowed according to rate of progression (ie, acute [hours to days], subacute [weeks to months], or chronic [years]) and whether it is sporadic or inherited. At presentation, the course may not be apparent. Imaging and diagnostic testing for diagnosing the cause of cerebellar ataxia should includebrain MRI and blood testing for potential treatable causes such as vitamin deficiency, thyroid disorders, and inflammation or infection, as reviewed by Khemani.1 However, extensive evaluation of most chronic late-onset sporadic ataxias fails to yield an identified etiology. Over time approximately 1 in 3 patients with cerebellar ataxia develop multiple system atrophy (MSA); the rest likely have unidentified genetic mutations.

1. Which of the following does not include cerebellar ataxia as a core feature?

2. That the patient has lived more than a decade after onset of his illness rules out which of the following?

3. Which of the following is not included in the initial diagnostic testing for persons with cerebellar ataxia?

The results of Mr. K's tests were diagnostic and are presented here with the answers to challenge questions and a case discussion.

The authors have no financial relationships to disclose.