Cognitive impairment after acute stroke is likely under-appreciated despite its impact.

Cognitive impairment after acute stroke represents a very real source of disability for many stroke survivors, resulting in decreased capacity for employment, increased risk of dementia, and poorer overall survival. Further, cognitive function is regarded by most patients and families as being of paramount importance, and represents an important determinant in their assessments of outcome following stroke.1 These deficits are not always appreciated clinically, an observation that is supported by the recent report of multidomain neuropsychological impairment in 60 subjects regarded as having “good functional outcome” after stroke.2 While very important in its own regard, cognitive impairment following stroke is also an independent predictor of poor functional outcome one year after acute stroke.3 The identification, definition and study of vascular dementia (VaD) and vascular cognitive impairment (VCI) represent important advances in the treatment of cerebrovascular disease (CVD).

The term “multi-infarct dementia,” coined by Hachinski in 1975,4 can be overly restrictive and potentially misleading. The term implies inclusion only of dementia caused by multiple infarctions, excluding cognitive impairment from a single stroke, hemorrhagic strokes, accumulation of widespread microvascular damage, etc. Clearly, these other conditions may also cause cognitive impairment or dementia clinically similar to dementia due to multiple infarcts. Also, this terminology does not adequately account for the association between “silent ischemia” and dementia, which may occur even in the absence of a clinical stroke.5

Multi-infarct dementia was later replaced by the term “vascular dementia” (VaD), also suggested by Hachinski.6 VaD addressed the shortcomings of the terminology of “multi-infarct dementia,” and has become widely utilized, largely has replacing MID. This is also due in part to the development and publication of diagnostic criteria by the National Institute of Neurological Disorders and Stroke — Association Internationale pour la Recherche et l’Enseignement en Neurosciences (NINDS-AIREN).7,8 These criteria (presented in Table 1), were developed as diagnostic criteria for research studies, but represented an important step toward standardizing recognition and diagnosis of vascular dementia in clinical practice. Briefly, they specify the presence of a dementia, evidence of CVD on examination or imaging, and a determination that the two are “reasonably related.” 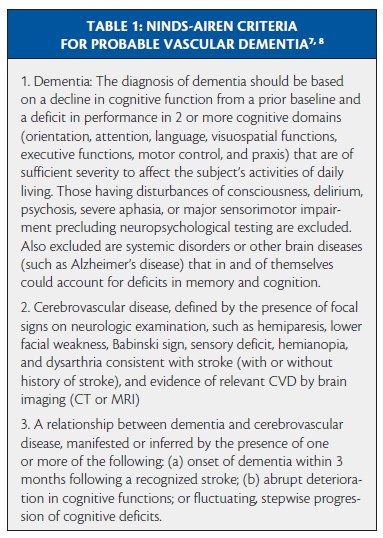 The term VCI also reflects the growing recognition of the contribution of microvascular ischemia to other causes of dementia.11 A recent paper described the longitudinal accumulation of new, tiny areas of acute ischemia on consecutive brain MRI mapping. Although the number of subjects in this study was small, the authors reported a rate of accumulation similar to the averaged rates of accumulated leukoariosis in other longer-term studies.12 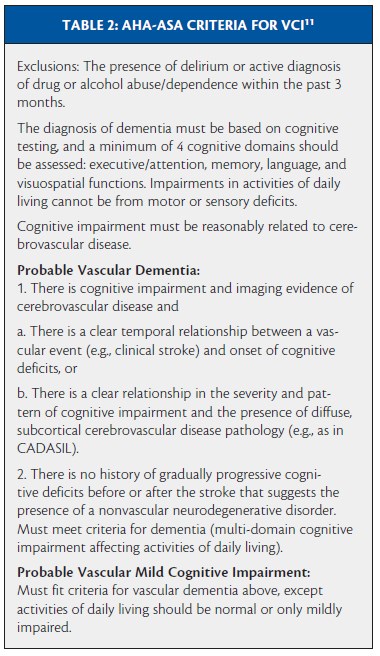 Radiological Features. Although at its core the diagnosis of VCI uses a clinical construct, regardless of the criteria used evidence of CVD is required. Thus, neuroimaging (either CT or MRI of the brain) plays an important role both in recognizing and establishing the diagnosis of VCI. Most typically, evidence of discrete ischemic stroke with or without widespread microvascular ischemic changes (Figure 1) is expected. However, the established criteria for VCI leave ambiguous the specific nature of CVD, and thus the definition of VCI includes people having cognitive impairment following intracerebral hemorrhage, widespread microhemorrhages related to amyloid angiopathy or cerebral amyloidosis, or subarachnoid hemorrhage. Conceivably, this definition might be stretched to include people having cognitive impairment following subdural hematoma. 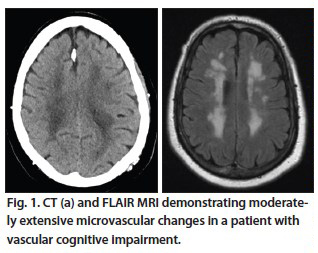 The different mechanisms of injury and differentially affected neuroanatomical structures imply that the pattern of cognitive deficit, and likely the longitudinal evolution of these deficits, may vary significantly among the patients thus described. While the broad scope of this definition is desirable to increase recognition of the importance of vascular impacts on cognition, it also constitutes a challenge to describe or study in detail such a heterogeneous group.

Clinical Features. As discussed above, the broad range of imaging findings directly imply that the clinical presentation of vascular cognitive impairment should be heterogeneous as well. Certainly, the location of a discrete infarct can be expected to result in deficits that reflect the neuroanatomical structures injured by the stroke. For example, focal cognitive deficits such as aphasia from dominant hemisphere involvement or neglect from nondominant hemisphere lesions would be predicted.

That being said, studies of VCI have demonstrated that certain clinical features are more commonly seen. It is hypothesized that this pattern of deficits reflects the widespread involvement of periventricular white matter. Specifically, psychomotor slowing, executive dysfunction, and memory deficits are common in patients having VCI. The memory deficits seen in VCI more prominently affect memory retrieval, as opposed to the encoding memory deficits seen in AD. This can manifest as memory impairments that improve with cuing or contextualization of the item to be recalled, whereas this technique is not generally effective for patients having an encoding deficit (in whom the item was unable to be encoded to begin with). Mood disturbances, including depression, apathy, and pseudobulbar affect are more common early in the course of VCI.13

Other non-cognitive clinical symptoms and signs can support a clinical suspicion of vascular cognitive impairment. These include focal motor and/or sensory findings that suggest a history of stroke, brainstem findings suggesting a focal lesion, and parkinsonian gait disturbance. Clinical features helpful in distinguishing VCI from Alzheimer’s disease are outlined in Table 3. 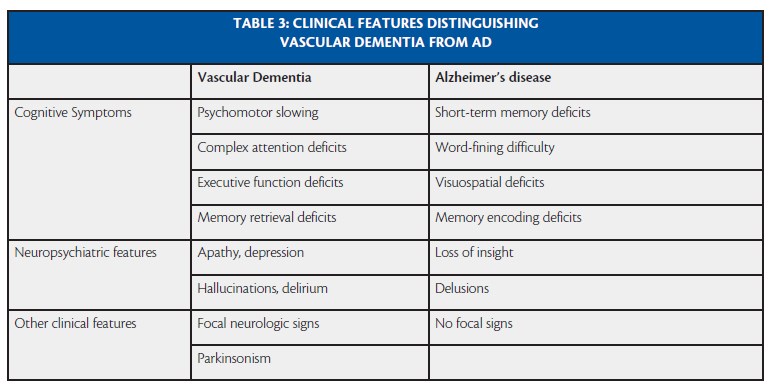 Likewise, the Hachinski Ischemic Score (Table 4) was developed to aid in characterizing common findings and medical history related to CVD to distinguish VaD from AD. 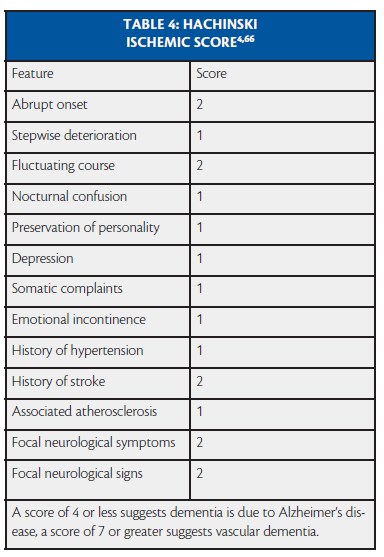 Neuropsychological detection and trajectories in VCI. Numerous cognitive screening measures have been proposed for study of stroke survivors, but many are complex or require too long to administer, and most require in-person assessment. The Stroke Harmonization guidelines proposed several protocols, including a brief “5-minute protocol” with an aim to create more standardized cognitive assessments in studies of stroke.1 Hopefully, this will bring more focused attention and more generalizable observations to topics related to the impact of cognitive impairments on stroke survivors.

The work of Mayer et al. demonstrated significant cognitive improvement occurs in the 12 months following subarachnoid hemorrhage (SAH), with much of that improvement manifesting in the interval between 3 month and 12 month assessment in over 1/3 of patients.14-16 A similar study in SAH demonstrated that motor recovery plateaued at 6 months, while cognitive recovery continued between the 6 month and 12 month assessments.17 However, SAH represents less than 10 percent of all strokes, and few data exist characterizing the longer-term cognitive outcomes following the vastly more common clinical event of ischemic stroke or what factors may limit the capacity for cognitive recovery.

Stroke physicians vary in their opinion of whether ischemic stroke subjects exhibit longitudinal cognitive recovery beyond lessening of the mental fatigue and depression symptoms that often occur in the setting of acute ischemic stroke. However, data regarding both cortical and subcortical reorganization processes important in motor and language recovery18-20 argue that longitudinal cognitive recovery should occur. A recent report from Germany suggested that one-third of subjects demonstrated cognitive improvement in the 3 years following first stroke.21 Another report of 43 stroke survivors reported improvement on measures of attention and executive function over the first 6 months following acute stroke.22 These preliminary studies need to be validated in larger populations to permit generalizability. Doing so will establish cognitive impairment following stroke as both an important substrate to the neuroplasticity required for functional motor recovery and also as a target for techniques that promote neurorehabilitation.23-25

Anticholinesterase Inhibitors. Anticholinesterase inhibitors have the most robust evidence for clinical improvement of VCI. Donepezil, galantamine, and rivastigmine are FDA-approved for treatment of AD and have demonstrated modest improvements in various components of cognitive functioning. The AHA/ASA guidelines with respect to VCI found class IIa, level A evidence for the use of donepezil and galantamine in VCI.11

The evidence for use of Donepezil was based on several trials demonstrating improvement in cognitive testing (ADAS-Cog, MMSE) and global functioning but without significant improvement in activities of daily living.26, 27 Some effects were dose dependent, requiring higher doses (10mg) of to achieve measurable improvement. There is evidence that donepezil produces greater cognitive improvements in patients with cortical and multiple territorial lesions versus subcortical lesions.28 This is consistent with findings from an 18-week trial of donepezil in patients with cerebral autosomal dominant arteriopathy with subcortical infarcts and leucoencephalopathy (CADASIL).29

The evidence for the use of galantamine has not demonstrated improvements in global function or daily living, but did have improvement in executive functioning on the ADAS-Cog.30,31 Rivastigmine has the weakest evidence in VCI. Across three randomized controlled studies assessing this drug, there was only a mild appreciable improvement in MMSE in one study but associated with significantly higher levels of nausea, vomiting, and anorexia as compared to placebo.32,33 Similar to galantamine, there was no appreciable improvement in global functioning or daily living. Exploratory analyses suggested that improvement in cognition may represent the known drug effect on concomitant AD pathology, which is highly prevalent in older patients.

Other Pharmacologic Treatments. Memantine is a NMDA antagonist and is known to demonstrate cognitive improvement in patients with AD. Two randomized clinical trials have assessed memantine in a VCI population. There was improvement in measures of cognition (ADAS-cog) and in behavior (NOSGER) but no impact on global functioning.34-36 Patients with more advanced disease (MMSE <15) and those with small vessel disease without radiologic evidence of large vessel disease obtained grater benefit.35 This may have been the result of faster decline of the patients with small vessel disease in the placebo group. Memantine was well tolerated at a dose of 10mg twice daily in both studies.36,37

Escitalopram was investigated as an adjunctive treatment for cognitive impairment following stroke in a small 12-month clinical trial.38 This study included 129 subjects who were randomized to three arms: a double-blind placebo-controlled comparison of escitalopram (n = 43) with placebo (n = 45), and a nonblinded arm of Problem Solving Therapy (n = 41). The authors reported a benefit on global cognitive function and delayed memory on a standardized neuropsychological battery (although the magnitude of effect represented less than one standard deviation). They did not observe treatment effects in other neuropsychological measures. This beneficial effect of escitalopram was felt to be independent of its effect on depression. It should be noted that the escitalopram group was younger, had less hypertension, and had a different frequency of stroke etiologies compared to the other two arms of the trial. The authors concluded that the utility of antidepressants in the process of post-stroke recovery should be further investigated.38

Look for Part 2 of this article in the next edition of Practical NeurologyTM, offering an overview of complementary-alternative medicine compounds and secondary prevention strategies.

Alicia M. Zha, MD and Brendan J. Kelley, MD are members of the Department of Neurology at The Ohio State University.

A Q&A with Shazam Hussain, MD