Update on clinical use of medical marijuana for movement disorders.

A 2017 market research report1 suggests 115 million adults (~46% of adult population) in the US had never tried marijuana. Another 78 million adults (31%) said they had tried but did not currently use marijuana. Among those who said they used marijuana, 20 million (8%) did so yearly and 35 million (14%) used marijuana monthly or more frequently. At least two-thirds of people surveyed said that marijuana was less risky than alcohol, tobacco, or opiates. Approximately half of the marijuana users were ages 18 to 36 years and approximately half were parents. Since 2012, 10 states and the District of Columbia have legalized recreational use of marijuana.

Medical Use of Marijuana

Documented use of marijuana for medicinal purposes begins around 2700 BCE and continues with use in the Greco-Roman empires for labor pain, toothache, and earaches recorded from 450 to 200 BCE and use for epilepsy recorded in 1000 AD. In 1798, Napoleon brought Cannabis to Europe from Egypt for use as a pain reliever and sedative. The same year, physician Wiliam O. Shaughnessy published an article introducing therapeutic use to western medicine. By 1900, use was prevalent, over-the-counter preparations were widely available, and there were over 100 published articles in the medical literature regarding medicinal use of marijuana.

In 1914, use of cannabis in the US was declared a crime by the Harrison Act. In 1937, the Marihuana Tax Act banned use and sale of cannabis in the US. In 1970, marijuana was scheduled as a narcotic at the most stringent level, effectively prohibiting research on medical use of marijuana in the US. This occurred just as progress was beginning in understanding psychoactive effects of marijuana. Δ-9-Tetrahydrocannabinol [Δ9-THC] was discovered in 1966 and cannibidiol (CBD) receptors were found in the brain in 1988.2 See Table 1 for a guide to terminology of marijuana and cannabis. 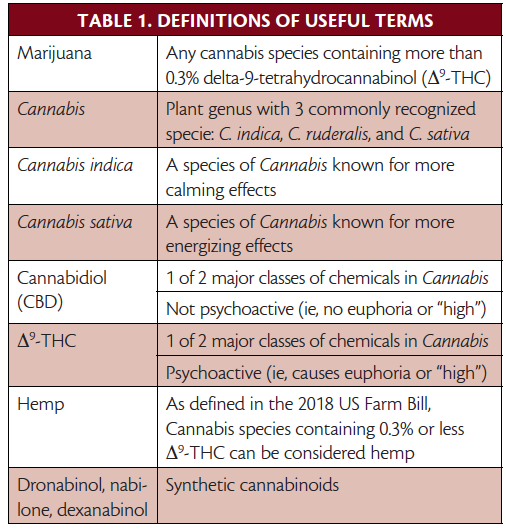 The last 25 years have brought another sea change as California became the first state to legalize medical use in 1996, and today, 33 states and the District of Columbia have legalized medical use. At the federal level, marijuana is still a Schedule 1 drug, whether the intended use is medical or recreational. Possession carries penalties including jail time and fines of up to $5,000 for a first offense.

Each state that has legalized medicinal use has defined qualifying conditions. In Pennsylvania, 12 of 23 serious medical conditions that qualify are neurologic, and 4 are neuro-psychologic (Table 2). 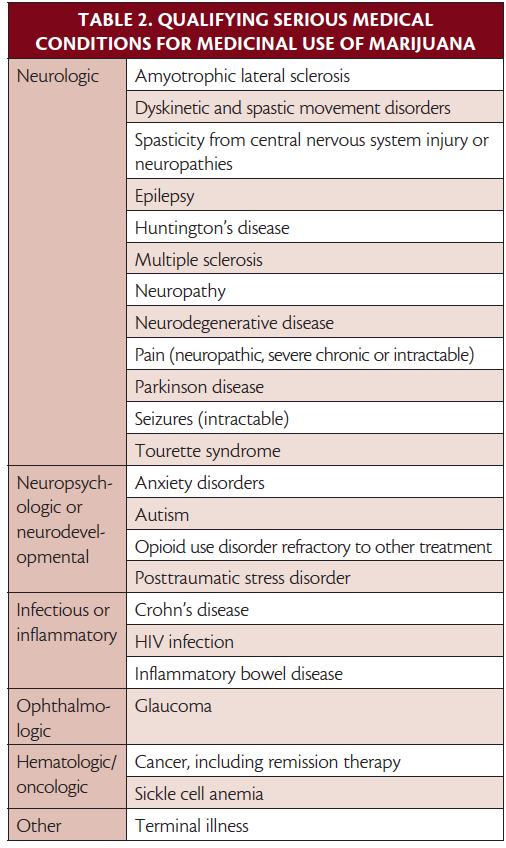 The Food and Drug Administration (FDA) has approved 2 synthetically produced components of Cannabis for appetite stimulation or mitigation of nausea and vomiting in people with HIV or cancer. The FDA has approved only 1 medication purified from Cannabis, which is for treatment of seizures associated with Dravet Syndrome or Lennox-Gastaut Syndrome.

Pharmacology and the Endocannabinoid System

There are over 100 chemicals in the Cannabis plant and those found in the plant are termed phytocanniboids, whether purified from the plant or synthesized. Endocannibinoids occur naturally in the human body. Not all cannabinoids interact with the cannabinoid receptors (CB1 or CB2) found in humans. The CB1 receptor is highly concentrated in the basal ganglia, hippocampus, and cerebellum—areas known to be involved in movement disorders (Figure). There are several neurotransmitters, both excitatory and inhibitory, that are affected by binding to the CB1 receptor including the monoamines, GABA, and glycine. 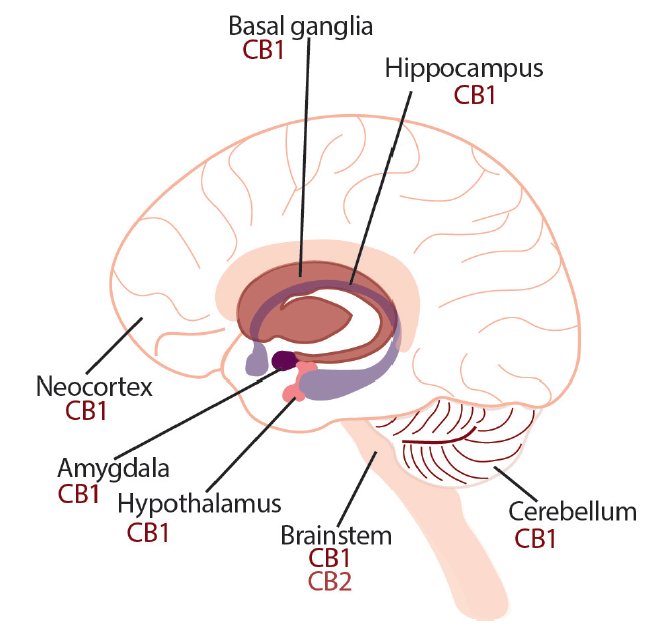 Much of the research into the medicinal use of marijuana for Parkinson disease (PD) is preclinical in animal models. These suggest that there may be neuroprotective benefits of cannabinoids, but this has not translated into large double-blind randomized controlled studies in humans.

In a small (n=7) pilot study, the synthetic cannabinoid receptor agonist nabilone or placebo were given before an L-dopa challenge and change on the Rush Dyskinesia Disability Scale (RDS) was measured.5 A 22% reduction in the RDS score was observed; however, total levodopa-induced dyskinesia (LID) time did not improve and there was no improvement in parkinsonian symptoms and no worsening in antiparkinsonian effects of L-dopa. Another pilot study (n=8) used rimonabant, a CB1 antagonist, or placebo for 16 days before an L-dopa challenge.6 Here too, there were no effects on LID, motor disability in the ON or OFF state, and no change in the Unified Parkinson Disability Rating Scale (UPDRS) score.

In 2 small double-blind studies, CBD (1.5 mg, 2.5 mg, 75 mg, or 300 mg) vs placebo had no effect on UPDRS scores or neuroprotection methods, although in 1 of these there was a positive treatment effect on the self-reported Parkinson Disease Questionnaire-39 (PDQ-39) with 300 mg CBD vs placebo.7,8 There were some trends in these studies that secondary outcomes measures of sleep, anxiety, and pain improved with CBD treatment vs placebo, but this was not statistically significant. Research on cannabinoids for treatment of nonmotor symptoms of PD is ongoing.

There are a few small studies of Cannabis for treatment of Huntington disease (HD).9-11 A study of CBD capsules for 6 weeks in 15 people with HD showed no effects.9 A study of the synthetic CB1 agonist nabilone (1 or 2 mg/day for 5 weeks) showed no change on total motor score or difference between doses. However, improvements in the chorea scale and a neuropsychologic symptom inventory were seen.10 The third study showed no changes in motor, cognitive, behavioral or functional scores with a spray formulation that was 50% Δ9-THC and 50% CBD.11 Although these studies suggest lack of benefit, all were too small to make reliable conclusions about any benefit or lack thereof for cannabinoid medication or medical marijuana for HD.

For dystonia there are many case reports and case series,12-15 but results of these cannot be generalized. There are 2 small randomized double-blind placebo-controlled studies. The first found no significant benefits of nabilone on the Burke-Fahn-Marsden Dystonia Rating Scale (BFMDRS),16 and the second found no effects with dronabinol using the Toronto Western Spasmodic Torticollis Rating Scale (TWSTRS).17

For evidence regarding use of marijuana or cannabinoids for Tourette syndrome (TS), there are 5 uncontrolled single case studies18-232 an observational study,23 and 2 small randomized blinded placebo-controlled trials.24,25 In the observational questionnaire study, 64 people with TS were asked if they used marijuana. Of the 17 (26.5%) who did, 14 (82%) reported that marijuana improved their motor or vocal tics, obsessive-compulsive disorder (OCD) symptoms, or attention deficit hyperactivity (ADHD) symptoms.24 In the first of the 2 trials (n=12), Δ9-THC vs placebo improved TS symptoms and scores on a TS global rating scale; the improvements were dose related.25 In the second trial, parallel groups of participants were given Δ9-THC or placebo, and Δ9-THC provided improvement in TS rating scales; however, 7 of 24 participants dropped out of the study and the treatment period was brief. Both studies are too small to draw conclusions about efficacy for TS.26 The 2019 AAN guideline on treating chronic tics, including those of TS is that there is limited evidence that dronabinol may reduce tic severity and that cannabis-based medication may be used for adults with treatment-resistant tics or for adults who already use cannabis to self-medicate tic, but that Cannabis-based medications should not be used in adolescents or children.27

There are no published articles on use of cannabinoids or marijuana for restless leg syndrome, ataxia, or myoclonus. For tremor associated with multiple sclerosis (MS), 3 randomized double-blind placebo-controlled studies showed no benefits to treatment with CBD, Δ9-THC, Δ9-THC/CBD, or nabiximols vs placebo.28-30 Notably, 2 of the 3 were relatively large (n=630, 337).29,30 Evidence from Class 1 studies suggests oral cannabis extract, Δ9-THC, and nabiximols all improve spasticity associated with neurologic conditions, although more improvements were seen in subjective vs objective measures.31

Although there is limited evidence supporting the use of medical marijuana or cannabinoids for some neurologic disorders, there is still much to learn. For movement disorders, there is evidence that cannabinoids may be beneficial for TS, spasticity, and nonmotor symptoms of PD. The number of clinical trials registered as in progress to study cannabinoids in movement disorders is small (<10) and many of these are still in the recruitment phase. Although many individuals are asking their health care teams about medicinal use of marijuana or Cannabis derivatives, the answers that can be given will remain vague until further research is completed. For those who do choose to use medicinal or recreational marijuana, it is important to advise them of possible side effects and drug interactions and to caution against driving or operating heavy machinery until they know how marijuana affects them.