Mr. E presented to a local emergency department at age 65 with a 2-day history of headache, lethargy, confusion, and visual hallucinations. His family endorsed some disorientation, and he had some difficult with complex tasks (ie, the inability to send e-mail, stating he was going to “neuroanatomy” when trying to get to the washroom). Mr. E’s medical history was significant only for benign prostate hyperplasia and gastroesophageal reflux disease. He took no medications regularly and did not smoke cigarettes, drink alcohol, or use recreational drugs. Mr. E had developed a vesicular rash on his left forehead 11 days earlier. On the day he presented to the emergency department, he had completed 7 days of treatment with oral valacyclovir for a presumed herpes zoster infection (also known as shingles) that had not involve the cornea of his eye or the tip of his nose. Review of systems was otherwise unremarkable as was Mr. E’s initial physical examination.

In consultation with the infectious disease team, Mr. E was treated with 14 days of intravenous acyclovir at a dose of 700 mg every 8 hours. His confusion began to improve, but he continued to have visual hallucinations. He was discharged with a diagnosis of herpes zoster meningoencephalitis.

During his acute illness and hospitalization, Mr. E had begun having visual hallucinations that were exclusively visual and not bothersome at the time. Examples included seeing small animals on the counter top, seeing people talking to each other in his house, bathrobes hanging in the bathroom, and he often saw a woman and smaller person standing together in his hallway. With regards to his cognitive concerns, he endorsed feeling “dull.” Mr. E was started on a low dose of rivastigmine approximately 3 months after his acute illness, which resulted in a dramatic and near complete disappearance of his hallucinations.

Mr. E’s hallucinations, however, returned within 2 to 3 months, at which time his rivastigmine dose was increased with a similar dramatic effect (Table). Tests for antibodies indicative of autoimmune encephalitis (ie, antibodies to LGI-1, Caspr2, NMDA, Hu, Ri, Yo) were negative. Thyroid function, vitamin B12 levels, and results of serum protein electrophoresis were all normal as were the findings of 2 brain MRI studies and repeat EEG, which again showed only some mild-moderate generalized slowing. 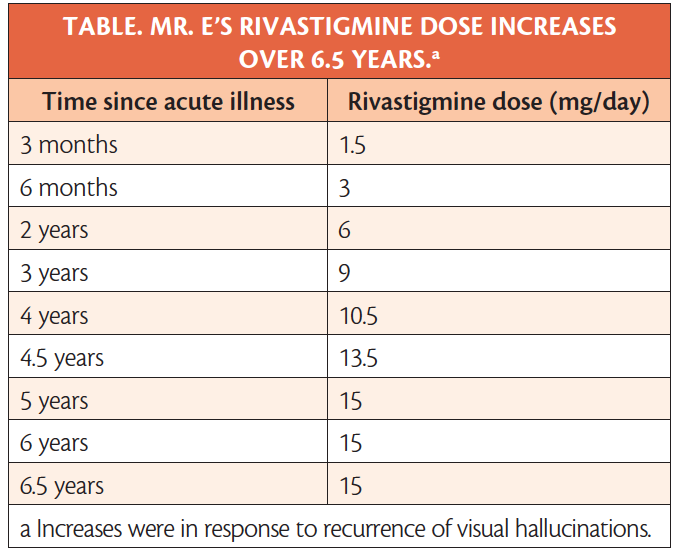 Both Mr. E and his family stated that although he did improve with treatment, he never quite returned to baseline following the herpes zoster encephalitis (HZE). He remained independent with his activities of daily living, however, and his cognitive issues initially seemed to have little impact on his functioning. Mr. E endorsed daytime sleepiness, and his partner noted he often would act out his dreams—a symptom that was not present before or during the acute herpes zoster infection, but rather started approximately 1 year later. At approximately the same time, Mr. E’s family described his gait as “stooped and shuffled,” and he endorsed walking more slowly than before. His mini-mental status exam score was 30 out of a possible 30, and his stooped and shuffling gait was the only abnormality seen on his physical examination.

Over the next 4 years, Mr. E’s gait progressively became slower and more shuffling. He had serial neuropsychologic testing (3 times at 1-year intervals), which showed some deficits in psychomotor speed, cognitive flexibility, retention of visual information, semantic fluency, and learning and memory skills. Although Mr. E’s neurocognitive test scores remained largely stable over this time period, his family noted large fluctuations in his functioning on a day-to-day basis.

At this point, 4 years after the acute encephalitis, Mr. E had a positron emission tomography (PET) scan that showed reduced posterior activity (Figure). He had developed mild bilateral upper extremity rigidity in addition to his shuffling gait. His voice had progressively become increasingly hypophonic. At a 6-year follow up visit, Mr. E had developed some mild bilateral bradykinesia and postural instability with a backwards tug test. His face had become more masked. Treatment with carbidopa-levodopa was begun with minimal effect. Mr. E and his family, however, chose to continue with carbidopa-levodopa because they felt it helped with Mr. E’s anxiety. He continued taking rivastigmine at 15 mg/day, which had been titrated above the recommended daily dose on his family’s own initiative because of the profound and positive effect of rivastigmine on Mr. E’s visual hallucinations. Day-to-day fluctuations, day-time sleepiness, and parkinsonism continued to progress over time. 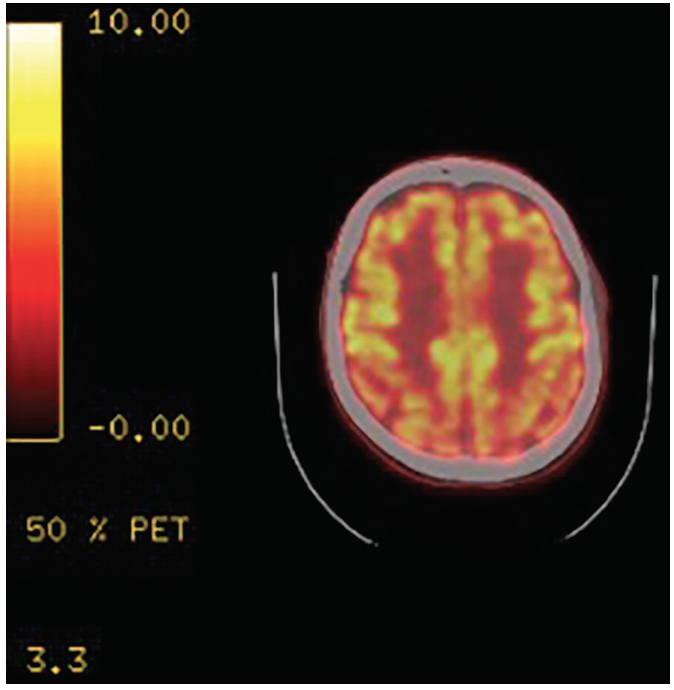 Mr. E has documented cognitive deficits on neuropsychologic testing with cognitive changes beginning during his acute VZV encephalitis. The constellation of visual hallucinations, REM-behavior disorder, day-to-day fluctuations, parkinsonism, and a PET scan with reduced posterior cortical metabolism are suggestive of Lewy body dementia (LBD). His response to rivastigmine was quite dramatic and unexpected. However, these deficits remained stable over a 3-year period without the expected progression of a true dementia.

A member of the alpha family of herpes viruses, VZV is a DNA virus that remains latent in the dorsal root ganglia of exposed individuals.1 Reactivation syndromes have been shown to have a multitude of neurologic sequelae, including, encephalitis, herpes zoster rash, myelitis, meningitis, postherpetic neuralgia, and vasculopathy.1 Complications of HZE have not been adequately studied, owing to the rare and variable presentation of the condition.2-4 However, small case reports have shown outcomes ranging from favorable to poor or even fatal. Cognitive decline following infectious encephalitis is frequently described.5 Postencephalitic sequelae are expected to be stable over time given that the infection has cleared, whereas with a neurodegenerative process one would expect continued progression over time. We have presented the case of a man, age 65, who presented with herpes zoster meningoencephalitis and developed symptoms suggestive of LBD during the acute phase of his illness. These symptoms continued to progress. Although no virus has been conclusively implicated in a neurodegenerative disease process, there is some evidence suggesting neurotropic viruses may play a role in neurodegeneration.6-8 It is biologically plausible that an infectious encephalitis could either unmask a predisposition to a neurodegenerative disorder or could selectively damage the nervous system in such a way as to mimic a neurodegenerative disorder. The temporal relationship between the acute viral infection and the onset of hallucinations, cognitive concerns, REM behavior disorder and parkinsonism in this individual also point to some interplay between the conditions. We discuss this unique case and whether the HZE unmasked an early LBD or created pathology in the central nervous system akin to the degenerative process of LBD in the context of literature central nervous system effects of VZV reactivation.

We have considered whether Mr. E’s viral encephalitis unmasked a predisposition to LBD or if and infectious brain injury may have caused a clinical syndrome similar to LBD. The visual hallucinations, progressive parkinsonism, REM-behavior disorder, day-to-day fluctuations, and reduced posterior activity on PET scan are all suggestive of LBD. However, in contrast to typical findings of LBD, Mr. E’s neuropsychologic test results are relatively stable. His age at presentation is less typical for LBD as well. In addition, none of the symptoms discussed were present his acute viral illness. Although there is no definitive test to confirm the diagnosis, the time over which Mr. E has been followed and the overall progression in symptoms are helpful in determining his diagnosis.

The question remains, given the temporal relationship to HZE, what role may that infection have played in his ongoing and progressive symptomatology. To our knowledge, there are no cases of LBD following a case of HZE. The published literature regarding outcomes of HZE is limited. A case series compared neuropsychologic test scores of 9 people who had HZE with 16 individuals who had not had HZE. Although only 3 of the people who had HZE had repeat testing, all had persistent cognitive concerns.4 Another case series, however, demonstrated good cognitive outcomes in people who had recovered from HZE compared with a healthy control group.2 A single case of dementia with profound deficits on neuropsychologic testing following HZE has been reported, but is potentially confounded by an excessive delay in starting antiviral therapy.3

Parkinsonism following VZV infection has not been previously documented. Multiple viruses, including some other herpes-family viruses, have been implicated in a small number of cases of postencephalitic parkinsonism, which is generally expected to develop during the acute phase of the infection, with stable deficits over time.9 Mr. E, in contrast, has slowly developed parkinsonism over a period of years following his infection, suggesting a neurodegenerative process. The role of neurotropic viruses in neurodegeneration is an ongoing area of research and an epidemiologic study that compared 846 people with herpes zoster ophthalmicus to 2,538 healthy individuals found an increased risk of dementia associated with herpes zoster ophthalmicus.8 The proposed pathophysiology is not well understood, but it is theorized that neurotropic viruses may stimulate a cytokine storm in the brain, triggering protein expression that mimics the early neurodegenerative disease process.9 It is hypothesized that this inflammatory state may be a “first hit” in a “2-hit” process in which neurodegeneration is initiated by an initial inflammatory state. Most of the research related to neurotropic viruses and neurodegeneration is based on Herpes simplex virus and Alzheimer disease, with increased risk of developing AD found in those with a genetic predisposition (APOE-ε4 allele carriers).6,7 Because VZV is from the same alpha-group of herpes viruses, it can be postulated that VZV could trigger a similar neurodegenerative cascade. Consideration has been given to an autoimmune phenomenon, but the lack of MRI findings and negative antibody testing seemingly point away from this option.

This case highlights many different unknowns with regards to viral infections and their potential role in neurodegeneration. The features of LBD in this case are quite profound, and the temporal relationship to the HZE infection is difficult to ignore. The continued progression of parkinsonism leads us to favor a continued neurodegenerative process rather than the expected static postencephalitic sequelae. The pathogenesis of Mr. E’s current symptoms remains a mystery, as there is plausibility for both an unmasking phenomenon in a predisposed patient and damage from the inflammatory-infectious state as the main pathogenic factor.

RV, AK, and GH report they have no disclosures