Antisense oligonucleotides are a promising new therapeutic class being studied for the treatment of movement disorders.

Already emerging as treatment for a growing list of neurologic conditions, including spinal muscular atrophy (SMA), Duchenne’s muscular dystrophy (DMD), and hereditary transthyretin amyloidosis (hATTR), antisense oligonucleotide (ASO) therapies are also of interest for treating neurodegenerative diseases.1-8 The potential of ASOs as disease-modifying therapies is particularly interesting for the neurodegenerative diseases associated with proteinopathies because ASOs act by modulating protein expression. Although there are remaining concerns regarding durability, delivery, and potency of the ASOs to be studied and addressed, several ASOs have come into clinical use and more are in clinical trials for neurodegernative diseases. In this review we cover the potential use of ASOs to treat movement disorders.

The ASOs are synthetically derived short (18-50 base pairs) single-stranded oligonucleotides designed to target and modify messenger RNA (mRNA) function by Watson-Crick base pairing. The ASOs bind complementarily to target either pre-mRNA in the nucleus or mature mRNA in the cytoplasm, to modulate gene expression (Figure). After an ASO binds to a target sequence, several downstream events occur that affect protein expression. The ASOs can be designed to affect these events to increase or decrease target RNAs or proteins in a directed manner. This inherent design flexibility allows multiple mechanisms of action, including sterically blocking translation, modulating pre-mRNA splicing, enhancing degradative pathways, and upregulating expression. The mechanism of action designed is dictated by the type of modulation needed to address a particular target in a specific disease. 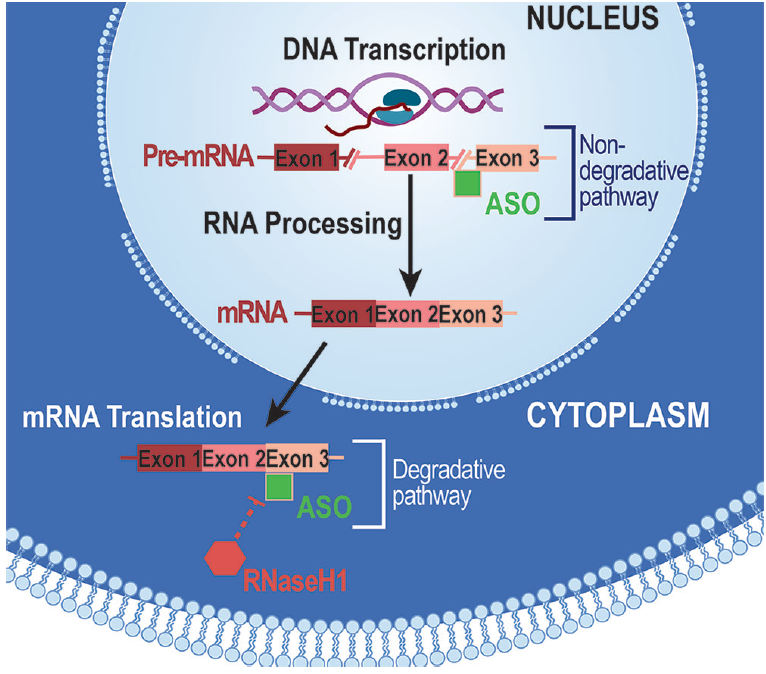 Figure. Antisense oligonucleotides (ASOs) affect protein expression by binding to pre-mRNA or mRNA to modulate processing of pre-mRNA to mRNA or translation of mRNA to protein.

For many toxic gain-of-function proteins in neurologic diseases, the goal for therapy is to reduce levels of a pathologic protein (eg, α-synuclein, tau, or huntingtin). A main strategy is to design ASOs that promote degradation of a target mRNA to reduce toxic protein levels by activating endogenous cleavage enzymes (eg, RNaseH1 that degrades RNA:DNA hybrids). Nondegradative ASO designs can alter mRNA and inhibit protein translation by preventing formation of the 5’-mRNA cap, affecting alternate splicing, or modifying the polyadenylation site. Some ASOs are designed to sterically hinder ribosome subunit assembly preventing translation and reducing protein levels in a nondegradative process.

To address diseases in which protein loss of function is thought central to pathophysiology, ASOs can also be specifically designed with any of several mechanisms to upregulate functional protein levels. Direct interruption of endogenous RNA degradation can enhance or promote the survival of the target mRNA and increase protein levels. Binding to endogenous microRNAs or other naturally occurring antisense transcripts that normally degrade target mRNA can increase mRNA translation and protein levels.

Use of ASOs for central nervous system (CNS) disorders has been limited by durability,1,2 and substantial research efforts have been made to enhance nuclease resistance to improve bioavailability.5,9 Pharmacokinetic properties are largely derived from the backbone chemistry of the oligonucleotide. Development of a phosphorothioate (PS) backbone was an early and critical step in advancing ASO therapy into use in humans. The PS backbone improves nuclease resistance and increases stability of ASOs to ensure sufficient amounts of ASOs could reach target RNA within a target tissue.2,6,10 Advantageously, the PS backbone also improves cellular uptake and recruitment of RNaseH1 to enhance target mRNA degradation, which further enhances the potential impact of ASOs by improving bioavailability.1-3,8

Changes to the sugar moiety (eg, 2’-O-methoxyethyl modifications) have been developed to optimize specificity by improving binding affinity for target mRNAs, and this can also facilitate evasion from nucleases.1,8 Many improvements have been made in protein binding to enhance cellular uptake and alter excretion.1,11 Detailed characteristics of these modifications are comprehensively covered in other reviews.1-3,6

Early first-generation ASOs caused complement activation after systemic administration, possibly because of off-target interactions with proteins or other cellular components.6 Although design modifications have significantly improved the safety profile, newer modifications have not been extensively tested. A sugar modification, known as locked nucleic acids or LNAs, has been associated with hepatotoxicity.6,12 This has been avoided, however, by a hybridization design utilizing multiple types of modification. Prevention of off-target toxicity has driven improved specificity and affinity. There remains a concern for the potential of ASOs to stimulate a neuroinflammatory response, especially through direct cerebrospinal fluid (CSF) application of ASOs. Neuroinflammation has not yet been observed to date, although long-term monitoring is still needed.1 The use of ASOs in human subjects is still early in development and more research is needed to understand the safety profile, particularly in the long-term given the potential need for lifetime therapy for some conditions.

There are several advantages of ASOs for CNS disorders. Highly specific targeting within the CNS with the precision and potency that is offered by ASOs is not easily achievable with other therapies. The ability to tailor a therapy to a specific mechanism of action thought to be responsible for disease manifestation both expands the repertoire of diseases that could be addressed by this technology and advances the overall trend towards precision medicine.

A significant hurdle in the development of many
CNS-targeted therapeutics is the blood-brain barrier (BBB). The size and charge of oligonucleotides preclude crossing the BBB from plasma, which has necessitated an intrathecal (IT) route of administration. The IT bolus injection into CSF leads to widespread and rapid distribution of the ASOs within neurons and glia.13,14 Other routes have been explored, including intranasal injections, although successful delivery of enough ASO to achieve adequate mRNA silencing has yielded mixed results, and modifications of this and other delivery techniques are still being explored.8,15

An autosomal-dominant inherited neurodegenerative disease, Huntington’s disease (HD), is caused by an expanded CAG trinucleotide repeat mutation within the huntingtin gene (HTT). This mutation results in an expanded mRNA that is translated to an aberrant huntingtin (htt) protein with a toxic gain of function, making it well-suited for ASO-mediated repression of protein expression.

In a phase 1/2 randomized placebo-controlled study, multiple ascending doses of an ASO targeting HTT were safely given to adults with early HD.16 Participants received monthly 10-mg, 30-mg, 60-mg, 90-mg, or 120-mg bolus IT injections of htt-targeted ASO for 4 months and were then followed for another 4 months without ASO treatment. Evidence of correct target engagement was seen, and mutant htt protein levels in CSF were reduced up to –42% for those given the 90-mg dose. A correlation between the degree of CSF protein reduction and improvement in the composite Unified HD Rating Scale was also seen, although many functional, behavioral, clinical neurologic, and cognitive assessments were unchanged.

Further investigation is indicated with potential adjustments to dose and allele-specific designs to improve suppression of mutant htt protein. Another strategy for allele-specific repression of htt is targeting highly conserved single nucleotide polymorphisms (SNPs), which may benefit the majority of people with HD.17 Ongoing trials are targeting distinctive SNPs and using isolated stereoisoforms in an effort to improve potency.18 Longer monitoring is also needed as a safety measure, and delayed neuroprotective benefits may only be evident with long-term monitoring, which may be a necessity for slowly progressive neurodegenerative conditions like HD.

Parkinson’s disease (PD) is a polygenic and multifactorial neurodegenerative disorder for which there are, as yet, no disease-modifying treatments. The recognition of a genetic contribution to PD neuropathology has been transformative in the approach to developing potential new treatments for neurodegenerative disorders. Postmortem neuropathology shows increased LRRK2 activation in brain specimens from people with PD. Pharmacologic inhibitors of LRRK2 have shown therapeutic promise in preclinical studies, identifying LRRK2 as a candidate for ASO silencing therapies in PD.19,20 A phase 1 multiple-ascending dose triala of an ASO targeting LRRK2 is expected to begin recruiting participants soon.19

As an α-synucleinopathy, PD is also a candidate for therapies that modulate overexpression or aggregation of pathologic proteins. As noted, overabundance and accumulation of aberrant forms of α-synuclein, encoded by SNCA, are associated with pathogenesis of PD. In early preclinical studies in animal models of PD, treatment with ASO targeting SNCA has decreased α-synuclein within monoaminergic cells by 20% to 40% after intranasal administration,15 which holds promise for PD and other synucleinopathies (eg, dementia with Lewy bodies [DLB]).

Spinocerebellar ataxias (SCAs) are a group of inherited ataxias characterized by progressive cerebellar ataxia. The SCAs are often accompanied by other features, depending on subtype, including ophthalmoplegia, dysarthria, and parkinsonism.21 Subtypes 1, 2, 3, and 7 are associated with CAG trinucleotide repeat expansions in ATXN1, ATXN2, ATXN3, and ATXN7, respectively, making these subtypes suitable targets for ASO therapy. In preclinical studies in animal models, ASO therapies targeting expression of these 4 ATXN genes have either prolonged survival, restored visual defects, or slowed disease progression.22-25 All of these studies were performed in transgenic mouse models of the respective SCAs, with varying degrees of altered protein expression, but no evidence of microgliosis or other neuroimmunologic response. The preclinical data are compelling and demonstrate the targetability of SCAs and other polyglutamine repeat disorders and holds promise for advancement of novel ASOs into forthcoming clinical trials.

Other previously untreatable movement disorders including progressive supranuclear palsy (PSP) and corticobasal syndrome (CBS), which broadly exist under the spectrum of tauopathies—disorders associated with pathologic accumulation of hyperphosphorylated tau. Tau, encoded by MAPT, is a prime candidate in therapeutic development because of the potential to address several multiple neurodegenerative disorders, including Alzheimer’s disease (AD) and the aforementioned movement disorders. In preclinical studies in transgenic mouse models, ASO therapy prevented tau-associated neuropathology.26

Design modifications for ASOs have improved cellular recognition and tissue uptake. Other strategies include packaging ASOs in lipid nanoparticles or other nanostructures; conjugation to cell-penetrating peptides, antibodies, polylethylene glycol, small organic molecules, N-acetylgalactosamine, or other cell-specific ligands; or utilizing small molecules to enhance the effects of ASOs.1,13 Delivery to the brain, let alone the correct cell type, is a challenge for any neurotherapeutic agent, but the adaptability of ASOs may be able to overcome these challenges via novel design engineering.

The durability of currently approved ASOs and those in clinical trials necessitates multiple IT infusions per year that may be required over a treated individual’s lifetime. Although great improvements have been made to improve nuclease resistance, further design refinements may yet extend the half-life while preserving beneficial features. The impermanence of ASOs may be an asset if untoward effects develop after long-term protein knockdown, an advantage over current viral-mediated gene therapy approaches.

Although the safety profile of ASOs in preclinical and clinical studies is largely reassuring, the potential consequences of long-term ASO administration are still under investigation. Many of the novel chemistry changes to the ASO structure have limited or no clinical data and further safety data are needed. Aside from potential complications of repeated IT bolus injections, there are unknown complications that may arise from prolonged gene silencing or unexpected off-target effects. It also remains unknown if a strategy to reduce parent proteins will alter the inevitable progression of neurodegenerative disorders. Recent studies have demonstrated clinical benefit in childhood-onset or monogenic diseases; yet studies are needed to determine if similar degree of clinical benefit will be seen in older adults with a multifactorial movement disorders like PD. Potential side effects may independently occur from either ASO chemistry or downstream effects of target engagement, obliging protracted monitoring of individuals who receive ASOs for unanticipated effects.

The versatility and adaptability of ASO design demonstrates the adeptness of this technology to address an expanding list of conditions in a targeted manner. The therapeutic potential of ASOs is vast and has continued to rapidly expand along with deeper understanding of their ability to address previously unapproachable drug targets. Further work is needed to demonstrate efficacy and investigate long-term effects. Although no single therapeutic may ever be developed for multifactorial neurodegenerative diseases, ASOs provide a new modality that may enrich our armamentarium to address the pathogenesis of these and other previously untreatable neurologic diseases.

University of Pittsburgh School of Medicine

University of Pittsburgh School of Medicine