Amyloid, tau, neurodegeneration (ATN)—where do we go from here?

In the National Institute on Aging and the Alzheimer’s Association (NIA-AA) Research Framework on Alzheimer’s disease (AD), AD is defined by underlying pathologic processes that can be documented by postmortem examination or in vivo by biomarkers.1 The biomarkers are grouped into beta-amyloid deposition (A), pathologic tau (T), and neurodegeneration (N), together termed ATN criteria, and include neuroimaging and biofluids, predominantly cerebrospinal fluid (CSF) (Table 1). 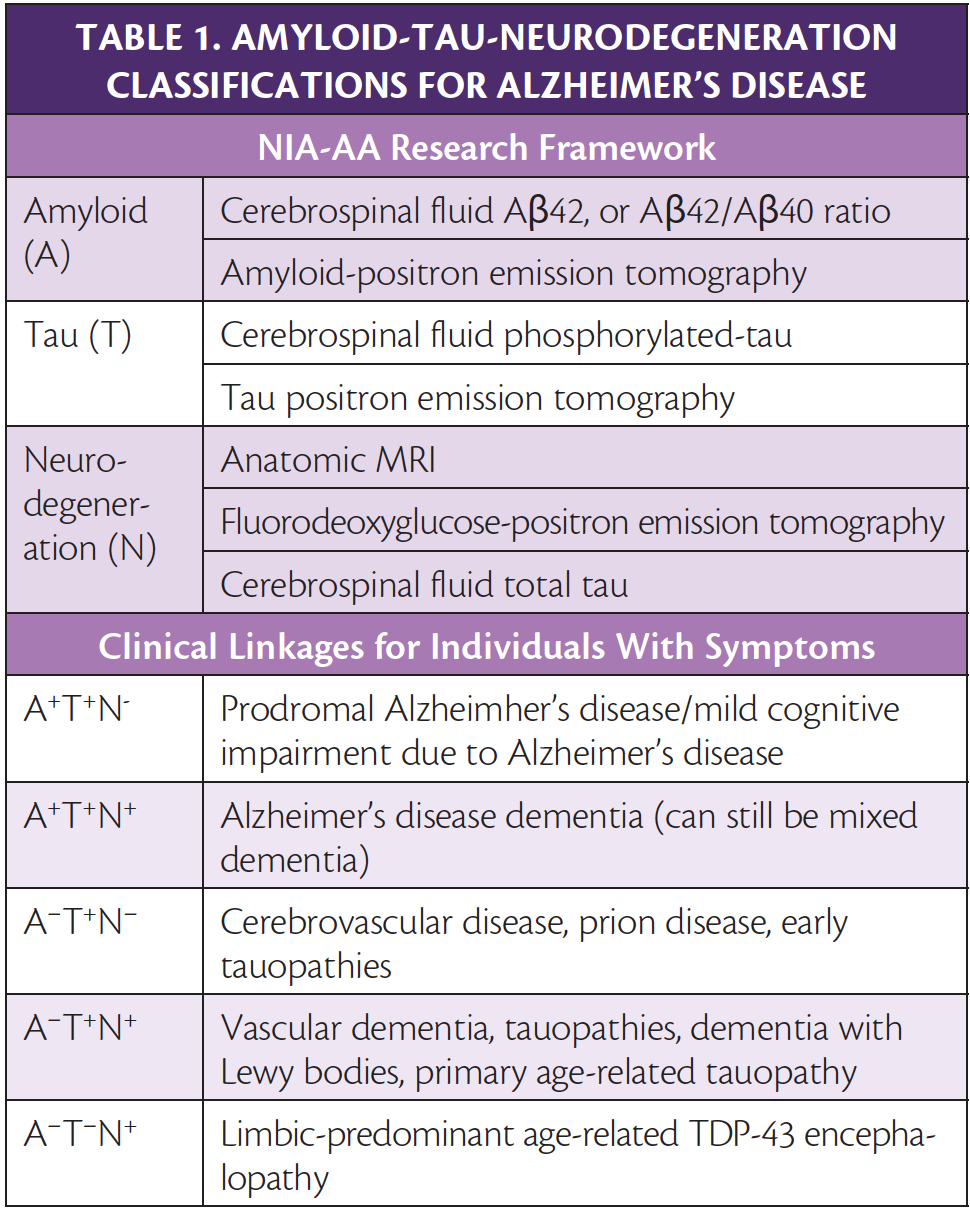 Although the applicability of the ATN criteria to clinical trials has been highlighted,2, the A+T+N+ biomarker profile supportive of AD does not exclude important comorbidities such α-synucleinopathies, TAR DNA-binding protein 43 (TDP43), hippocampal sclerosis, or cerebrovascular lesions, all of which are often present in people with AD. It is already apparent that clinical linkages to the ATN framework are modest in individuals with symptoms (Table 1).

The ATN classification is intended for observational and interventional research, not routine clinical care. Nevertheless, it will influence how practicing neurologists use biomarkers for persons with dementia. This review addresses how to care for people with a classic AD phenotype who are A− and look beyond ATN to other common pathologies (Table 2) implicated in people with mixed dementia, who will need combination therapy. We do not discuss ATN use in asymptomatic or preclinical AD, covered in this journal last year.3 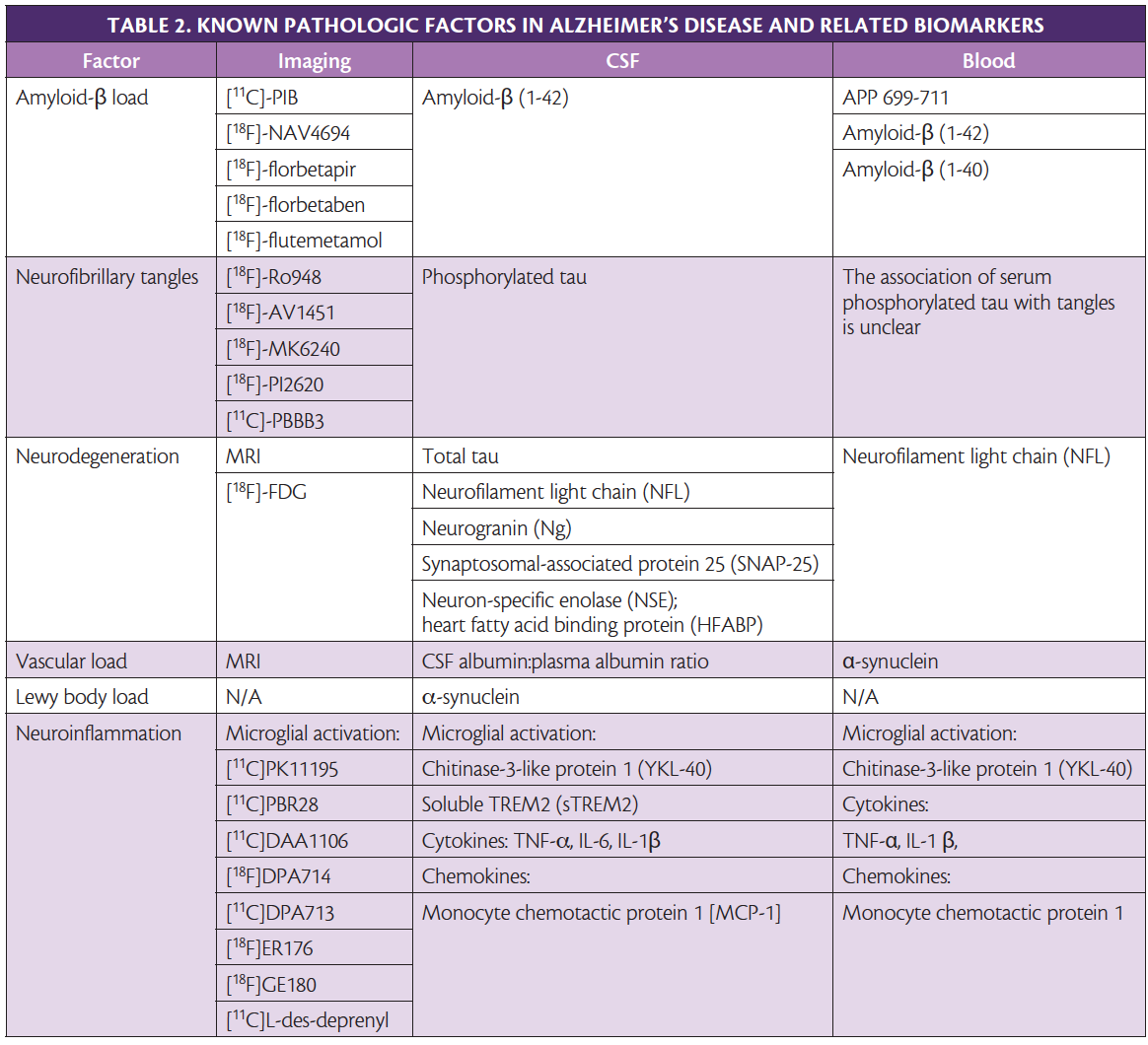 It is not rare for neurologists specializing in cognitive disorders to be surprised at an amyloid-negative positron emission tomography (PET) result and/or normal Aß42 CSF levels despite abnormally elevated p-tau CSF levels and evidence of atrophy on MRI or hypometabolism on fluorodeoxyglucose (FDG)-PET in an individual who fits the clinical pattern for mild dementia of AD type. Such individuals show a pattern of symptoms (gradual decline in episodic memory, not helped by cues, looking for words, and subtle executive impairment at work or at home) and the temporal progression over 1 to 2 years toward mild dementia (Figure). 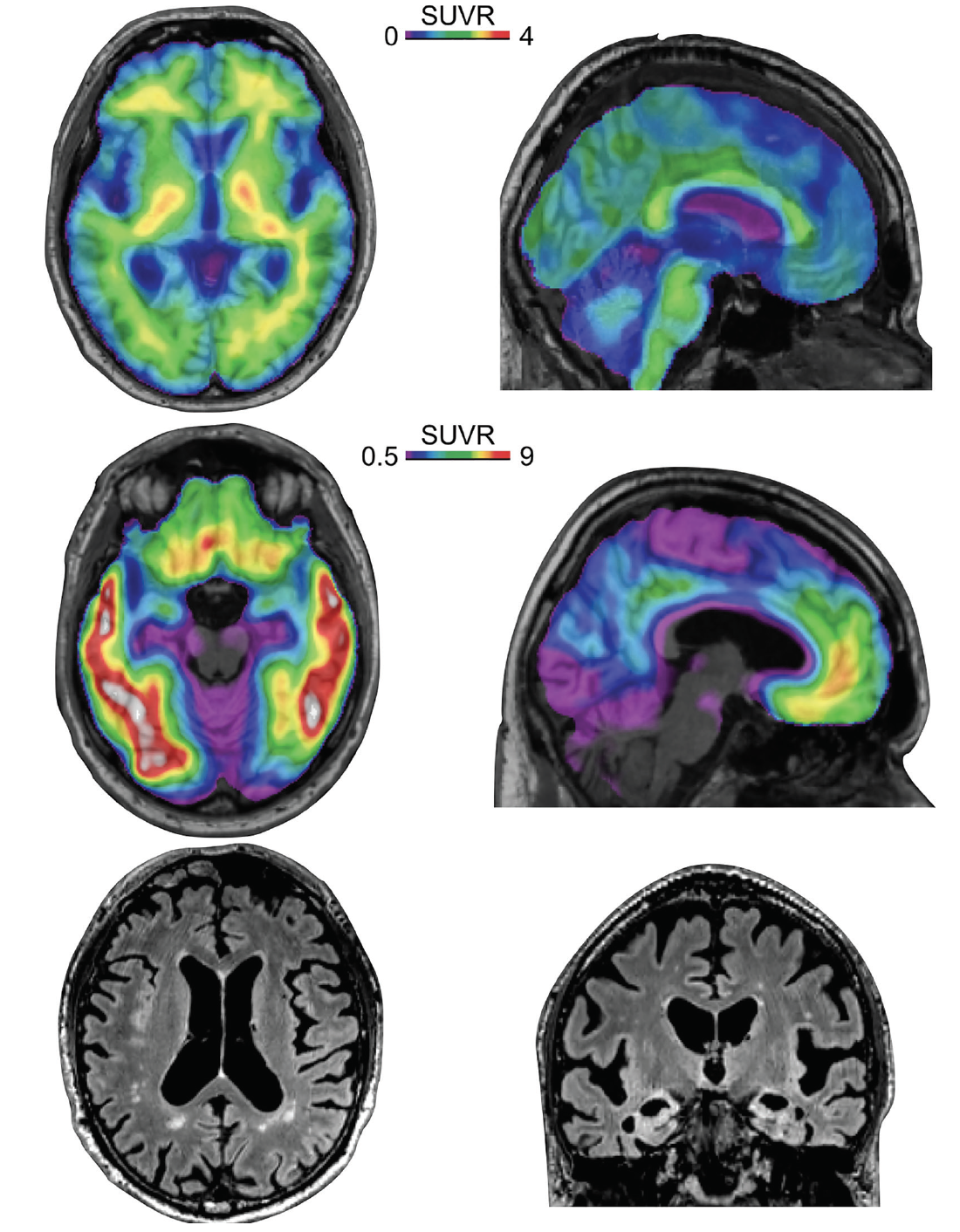 Practical considerations in these cases include

2. annual MRI and FDG-PET for patterns of atypical dementias4;

4. agitated sleep, visual hallucinations, and symptom fluctuations suggest dementia with Lewy bodies, which can be confirmed in many cases by the cingulated island sign on PET-FDG or a dopamine transporter (DaT) single photon emission tomography (SPECT) scan5;

There is increasing recognition of primary age-related tauopathy (PART) especially in people over age 85, with a slower rate of cognitive decline compared with AD, as illustrated by the case shown in the Figure.6

The ATN criteria bring up the need for flexibility in incorporating newly validated biomarkers, such as α-synuclein and TDP43 proteinopathies, microinfarcts, hippocampal sclerosis, and argyrophilic grains that can occur alone or in combination with AD pathologic changes.7-9 White matter hyperintensities (WMH), which can be easily quantified using MRI are a frequent comorbidity in individuals over age 55 with cognitive impairment.10 Neuroinflammation has been proposed as a major contributor to cell death at some stage in the AD pathologic process.11 Biomarkers related to the classic pathology of AD (ATN) and others (V for vascular, S for synuclein, I for inflammation) are under accelerated development, and periodic revisions to the ATN criteria and framework are to be expected.12 The biggest hope is to have blood-based biomarkers that are reliable indicators of intracerebral pathology, reducing the need for PET and CSF examination.13 For example, neurofilament light chain is a promising peripheral marker for neurodegeneration.14 In combination with available demographic (eg, age, gender, education, and vascular risks) and genetic data (ApoE genotype), algorithms may be developed to use the least invasive and most cost-effecive means of diagnosing causes of dementia.

The current ATN framework for AD will facilitate research in pathologically homogeneous groups of patients but will not help to determine comorbid factors at play in most people with dementia. The framework will thus be expanded as the validation of imaging, CSF and blood biomarkers bears fruit. It is essential that biomarkers utilized in the assessment of clinical cases are well validated.15 An advantage of the ATN framework for practicing neurologists is to broaden the diagnosis in vivo for people with nonamyloid dementias, and to look for comorbidity even in their amyloid-positive patients. In the near future this individual approach to diagnosis of dementia will lead to personalized combination therapy approaches.

Serge Gauthier is member of the scientific advisory boards of Biogen, Boehringer-Ingelheim, Kalgene, Lilly, TauRx, site PI for clinical trials sponsored by Lilly, Roche, TauRx, DSMB members for studies conducted by the ADCS, ATRI, Banner Health, Eisai.
Pedro Rosa-Neto is member of the scientific advisory board of Kalgene and was a site principal investigator for a clinical trial sponsored by Eisai.