Many cerebrovascular and cardiovascular diseases can lead to VCI by disrupting brain function to cause cognitive impairment through brain ischemia or vascular integrity loss resulting in brain hemorrhage.4 Causes of ischemic stroke (eg, large artery atherosclerosis, cardioembolism, and cerebral small vessel disease), intracerebral hemorrhage, or subarachnoid hemorrhage can cause VCI if the resulting brain injury is severe enough.5 A large single infarct or multiple infarcts are often the cause. Damage to a single important brain location (eg, language cortices, thalamus, or medial temporal lobe) is often referred to as a strategic infarct, can be sufficient to cause clinically significant cognitive impairment.6 The association between the cerebrovascular injury and the onset of cognitive impairment is relatively clear in the context of a symptomatic acute stroke, classified as poststroke VCI.5

The second most common cerebral small vessel disease, CAA is caused by β-amyloid deposition in the small arteries and arterioles of the leptomeninges and cerebral cortex.13 Rare genetic causes of CAA are marked by deposition of other types of amyloid.13 Vascular integrity loss resulting in large symptomatic and small asymptomatic brain hemorrhages is characteristic of CAA. These hemorrhages are restricted to typical cortical or subcortical white matter locations (ie, lobar locations), sparing the basal ganglia and brainstem (Figure 2).14,15

The major risk factors for vascular dementia and new dementia after stroke are listed in the Table.19, 20 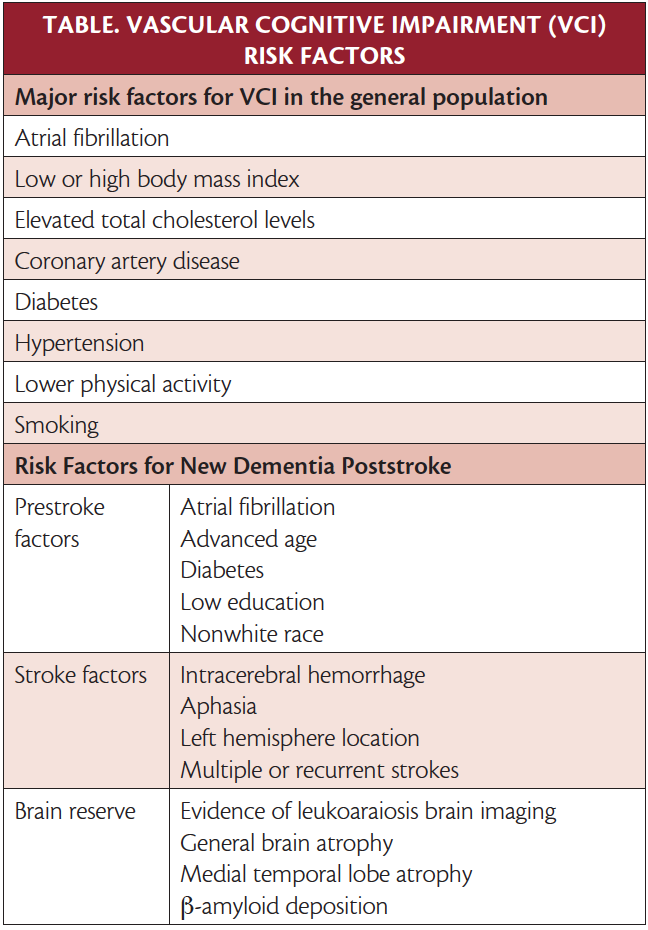 The prevalence and incidence of VCI increase with age.20 Based on clinicopathologic evidence, pure vascular dementia accounts for approximately 10% of dementia.17 Multiple-etiology dementia with a vascular component, most often in combination with AD, is more common, accounting for 30% to 40% of dementia.17 The increased risk of cerebrovascular disease-related dementia, as well as dementia due to AD, seems to decline at very old ages.21 A reason for this change might be that other dementia causes including mixed pathology, are more common with very advanced age.21

Patients with poststroke dementia experience a stepwise cognitive decline following a clinically diagnosed stroke. The link between the cerebrovascular disease and the onset of cognitive impairment is usually relatively clear. Prominent impairment of executive functions, with relative sparing of episodic memory is often seen.22 There may be stroke-related symptoms and signs, including aphasia, motor weakness, and sensory impairment. Cognitive impairment may improve or remain static and nonprogressive if there are no recurrent strokes and vascular risk factors are treated. Approximately 10% of patients develop new dementia 1 to 4 years after a clinically diagnosed stroke, but this is usually more than 1 year later in relation to a recurrent stroke.19

Vascular dementia can also manifest as a progressive or stepwise cognitive decline without a concurrent history of symptomatic stroke. This presentation is often associated with imaging evidence of clinically unrecognized cerebral small vessel disease (eg, multiple lacunar infarcts or extensive white matter lesions).9,10 The cognitive profile of cerebral small vessel disease, including arteriolosclerosis and CAA is marked by prominent executive function and processing speed impairments.23 More global impairments, including memory and other functions, can also occur.23 Slowing of gait is common in patients with advanced cerebral small vessel disease.24 Neuro-psychiatric symptoms, including depression, apathy, abulia, and psychosis with delusions or hallucinations may occur.

Several organizations have introduced diagnostic criteria for VCI, including the American Heart Association (AHA),25 the Diagnostic and Statistical Manual of Mental Disorders, Fifth Edition (DSM-5),26 and the International Society of Vascular Behavioural and Cognitive Disorders (VAS-COG).5

In all criteria, VCI is classified as either vascular MCI (referred to as “vascular minor neurocognitive disorder” in DSM-5) or vascular dementia (referred to as “vascular major neurocognitive disorder” in DSM-5). Cerebrovascular disease should be identified either by a history of stroke or by the identification of silent cerebrovascular disease using neuroimaging.25 Newer criteria specify that significant impairment in only 1 domain is sufficient to diagnose MCI or dementia.5 In MCI, there is a relative preservation of daily functioning compared to dementia. All criteria specify that a high burden of clinically unrecognized silent cerebrovascular disease can be sufficient to cause dementia.25

Evaluation of patients with suspected VCI begins with clinical history and a physical examination. The history should focus on the time course of cognitive decline in relation to any prior history of stroke. The physical examination should aim to identify gait impairment, bradykinesia, rigidity, and focal signs suggestive of cerebral small vessel disease or stroke. A cognitive screen should be performed to identify whether there is objective evidence of cognitive impairment, required for a diagnosis of MCI or dementia. The Montreal Cognitive Assessment (MoCA) is preferred and appears to be more sensitive than the Folstein Mini-Mental State Examination for detecting VCI.27

Routine investigations include laboratory evaluation consisting of complete blood count, electrolytes, creatinine, calcium, liver enzymes, vitamin B12, and thyroid-stimulating hormone to exclude causative or contributing metabolic or endocrine disorders. Magnetic resonance imaging (MRI) is more sensitive than computed tomography (CT) for signs of cerebral small vessel disease, including microbleeds, and therefore is preferred over CT if it is not contraindicated.

The aim of management for patients with VCI is to improve cognitive and behavioral symptoms and daily functioning, prevent further cognitive decline, and manage any other disabilities associated with the underlying cerebrovascular disease. A team of health professionals is often required, including nurses, physiotherapists, occupational therapists, psychologists, and social workers. Appropriate and adequate education and support for relatives and caregivers are also essential.

Some experts recommend considering acetylcholinesterase inhibitors for cognitive enhancement in patients with vascular dementia.25 This is based on the observation of improvement in cognitive performance in patients with vascular dementia in randomized controlled trials.28 This response, however, did not consistently translate into apparent functional or behavioral benefits in daily life across the trials.28

Because of metabolic syndrome risk and mortality associated, with some antipsychotics (eg, haloperidol and risperidone), these drugs should be used cautiously for the management of agitation, aggression, or psychosis in patients with vascular dementia.29 For individuals with comorbid major depression, selective serotonin reuptake inhibitors (SSRIs) are preferred over tricyclic antidepressants, owing to better tolerability in elderly individuals and fewer cardiovascular adverse effects.

Since the majority of VCI risk factors are modifiable, targeting these risk factors might reduce the incidence of VCI. Possible preventive measures for VCI include targeting individuals at high risk to improve their control of vascular risk factors and cardiovascular diseases. Pharmacological therapies or lifestyle modifications, including exercise, can be applied. A multimodal intervention simultaneously targeting dietary modification, physical exercise, cognitive training, and control of vascular risk factors has been proposed as a potential approach to prevent vascular dementia in at-risk individuals.30

The current guidelines for the prevention of recurrent stroke should be followed for individuals with a history of stroke and might include the use of antithrombotics, antihypertensives and lipid-lowering agents, and nonpharmacological interventions, such as exercise and diet modification.31, 32

31.Kernan WN, Ovbiagele B, Black HR, et al. Guidelines for the prevention of stroke in patients with stroke and transient ischemic attack: a guideline for health professionals from the American Heart Association/American Stroke Association. Stroke. 2014;45:2160-2236.

SA has no financial or other relationships relevant to this content to disclose. EES has received research grants from the Canadian Institutes of Health Research and Brain Canada; royalties from UptoDate; and research service contracts with McMaster University, the University of Ottawa Heart Institute, and St. Michael's Hospital in Toronto, Canada.