Biomarkers can be important tools for diagnosis.

Ms. K presented to the memory clinic with a history of memory loss and forgetfulness that began approximately 6 months earlier. Her symptoms included forgetting conversations and appointments. Ms. K is white, age 48, and has a history of type I diabetes. She uses an insulin pump and initially attributed her poor memory to fluctuations in blood sugar and poor sleep habits.

Past Medical History and Physical Examination

Ms. K has no hearing, believed to be secondary to exposure to measles in utero. She had bilateral cochlear implants placed 15 years ago, which no longer function, and she communicates primarily by lip reading and interpreting visual cues. She has no known history of high blood pressure, heart disease, malignancy, thyroid disease, severe or chronic infections, or autoimmune disease. Ms. K denied any weight loss. Her vital signs were unremarkable and presentation did not suggest underlying CNS infectious, inflammatory, or direct neoplastic process. Her family history is negative for neurodegenerative disorders and her neurologic examination findings were nonfocal.

Ms. K’s laboratory test findings were unremarkable except for a glucose level of 215 U per dL and vitamin D level of 10 ng per mL. Findings of head CT without contrast did not suggest any focal pathology, mass effect, or hydrocephalus. Ms. K’s cochlear implants precluded MRI.

Findings of neuropsychologic evaluation were consistent with multiple domain mild cognitive impairment. The neuropsychology report noted confounding factors (ie, depression, anxiety, uncontrolled diabetes, poor sleep hygiene, and communication difficulties) contributed to performance and could not be ruled out as the source of measured impairments.

Despite the present risk factor of diabetes, Ms. K’s clinical presentation was thought atypical for Alzheimer’s disease (AD) or other neurodegenerative processes, primarily because of her age and negative family history. A fluorodeoxyglucose (FDG) -PET scan was considered but not done because of possible difficulty interpreting FDG-PETresults in the context of uncontrolled diabetes. Amyloid PET was not done because of cost. We explained to Ms. K that lumbar puncture and cerebrospinal fluid (CSF) analysis could provide information regarding any underlying infectious, inflammatory, or neoplastic processes that might explain her cognitive changes and would also allow AD biomarker testing. She declined lumbar puncture or other invasive procedures. We also offered testing for APOE status; Ms. K declined this because of cost. Ms. K’s cognitive decline continued and, 2 years later at age 51, she and her family returned for follow up.

Ms. K proceeded with a lumbar puncture. Results of cerebrospinal fluid (CSF) analysis did not reveal underlying infectious, inflammatory, or neoplastic processes (either direct or indirect effect) in the central nervous system. However, Ms. K’s CSF AD biomarkers were extremely abnormal (Table). In light of her very young age at onset of symptoms, negative family history, and CSF analysis findings (particularly total tau [t-tau] and phosphorylated tau [p-tau]), the possibility of lab error could not be ruled out. Additional biomarker confirmation was felt desirable prior to arriving at a clinical diagnosis of probable AD. Ms. K and her family decided to proceed with amyloid-PET imaging that revealed moderate to frequent amyloid plaques, consistent with the diagnosis of probable AD. 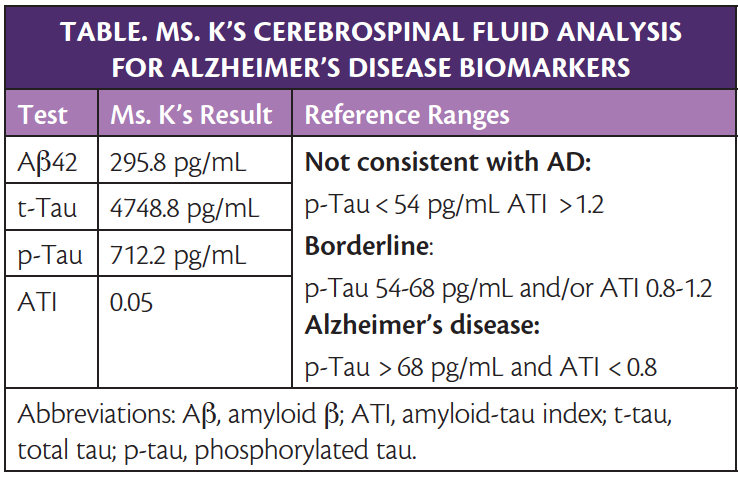 Ms. K was started on a cholinesterase inhibitor (donepezil) and an N-methyl-D-aspartate (NMDA) receptor antagonist (memantine), for symptomatic treatment of probable AD. Consideration was given to participation in a clinical drug trial, which could feasibly offer disease-modifying benefit (if effective) in addition to the therapies prescribed.

Early-onset AD (symptom onset prior to age 65) is a challenging clinical diagnosis. The differential diagnosis of early-onset dementia is large and includes a number of acquired as well as uncommon hereditary diseases. Short of brain biopsy, the presence or absence of AD pathology cannot be confirmed. However accurate clinical diagnosis is possible, especially now with biomarkers available. The National Institute on Aging and the Alzheimer’s Association (NIAAA) have developed diagnostic criteria that incorporate neuroimaging and CSF biomarkers.1 Ms K’s case shows the importance of incorporating biomarkers in the evaluation of people with early-onset cognitive impairment. Likewise, diagnosis in people with late-onset atypical clinical presentations could also benefit.

Accounting for 60% to 80% of dementia in the US, AD is a neurodegenerative disease. Typically, AD has clinical onset in the 7th to 8th decade of life. Early-onset AD occurs between the 4th and 6th decades, usually in people with a strong family history of probable AD.2 Approximately 5.7 million people in the US of all ages had AD in 2018, only approximately 5% of whom developed symptoms before age 65 (accounting for at least 200,000 individuals with the early-onset form of AD).3

Pathologic characteristics of AD include formation of extracellular amyloid plaques that result from the accumulation of β-amyloid in the brain. It is not known exactly how early amyloid plaques begin to form in the brain, whether they are the primary cause of the disease, or what pathogenic role is played by other changes in the brain that occur with AD.4 Another signature protein in AD is intracellular tau, which begins forming after the appearance of insoluble β-amyloid plaques and resulting neurofibrillary tangles that contain tau aggregates. Currently the most widely accepted amyloid-cascade hypothesis suggests these abnormally folded proteins lead to neurodegeneration and the clinical manifestations of AD. The Aβ protein is created by abnormal cleavage of the normally occurring amyloid precursor protein (APP). Likewise, neurofibrillary tangles are composed of hyperphosphorylated tau. Based on these pathophysiologic processes, measurement of certain biomarkers (eg, β-amyloid peptide [Aβ42], t-tau, and p-tau, are thought to reflect the pathological features of AD.5

Although most cases of AD are sporadic, multiple identified genes are correlated with increased risk of AD. There is, however, a known autosomal dominant form of AD (with complete penetrance) that has almost exclusively early onset and is referred to as familial early-onset AD (FAD). Identified causative mutations are in amyloid precursor protein (APP) on chromosome 21, presenilin 1 (PS1) on chromosome 14, and presenilin 2 (PS2) on chromosome 1. The proteins encoded are involved in amyloid processing with PS1 and PS2 affecting γ-secretase, 1 of 2 β-amyloid cleaving enzymes. Just over half (55%) of FAD cases are caused by PS1 mutations.6

Advanced age is the strongest risk factor for AD, suggesting an age-related biologic process (or processes) may be implicated in pathogenesis. Evidence strongly points to potential roles for vascular disease as cigarette smoking, midlife high blood pressure, obesity, diabetes, and cerebrovascular lesions are all strongly associated with the development of AD.7 Early in the course of AD, people may present with nondisabling memory loss described as mild cognitive impairment without changes in function (and therefore not meeting criteria for the diagnosis of dementia). In many cases, nonmemory changes may be the first presenting symptom (ie, progressive aphasia, progressive apraxia, executive dysfunction, and visuospatial impairment), especially in early-onset AD, which can further obscure clinical diagnosis of the presence of AD pathology.

Sporadic early-onset AD (EOAD) is more heterogeneous than late-onset AD (LOAD) due to a number of nonamnestic variants (eg, problems with language, visuospatial skills, praxis, or executive functions).8 Given the challenges of clinically diagnosing EOAD, recent diagnostic criteria have incorporated biomarker data, including cerebrospinal fluid (CSF) measurements of Aβ42, t-tau, p-tau, and the computed amyloid-tau index (ATI). When tested at recommended thresholds, these measures provide excellent sensitivity, but moderate-to-low specificity for clinically diagnosed AD compared with other dementias and brain disorders. Most published studies comparing individuals with AD with healthy people show a recommended combination of ATI less than 1.0 and p-tau more than 61 pg per ml provides the best sensitivity, specificity, and overall accuracy for a clinical diagnosis of AD.9

Availability of PET neuroimaging has opened new doors for clinical diagnosis of some neurodegenerative diseases. FDG-PET and -CT are valuable tools in extracerebral tumor imaging and are now being used to diagnose AD. Several studies have shown that cerebral metabolic alterations accompany and may even precede the clinical manifestations of AD that are seen with FDG-PET, which measure glucose utilization as a surrogate for neuron activity. Distinct cerebral glucose metabolism patterns may also help differentiate AD from other dementias. Amyloid PET uses radiotracers to visualize brain deposition of amyloid. Development of tau-PET radiotracers will also contribute to diagnosis and research. Multiple reports show cross-sectional association between cognitive impairment worsening and increased cortical tau-PET binding.10

Glucose metabolism is reduced early in AD and frontotemporal dementia (FTD). In healthy people, glucose metabolism decreases with age. Brain regions that show the greatest decrease in FDG uptake with aging are the bilateral superior medial frontal, motor, anterior, and middle cingulate and bilateral parietal cortices. Regions that show the least changes in glucose metabolism with aging are the bilateral medial temporal lobes, putamen, pallidum, lateral thalamic nuclei, right posterior cingulate cortex, precuneus, and both sides of the occipitotemporal cortex. Glucose hypometabolism in the frontal, anterior cingulate, and anterior temporal regions is seen more frequently in FTD, whereas in AD, hypometabolism is seen in the temporoparietal and posterior cingulate regions more commonly. It is important to differentiate FTD from AD because anticholinesterase inhibitors used to treat AD can have serious adverse effects in people with FTD.11

In the case presented, Ms. K had short-term memory impairment that she initially attributed to blood sugar fluctuations. She had no functional, personality, or behavioral changes. Although her diabetes and uncontrolled blood sugar appear to be risk factors for AD, her young age and negative family history were not suggestive of AD. As her hearing impairment interfered with language assessment, frontotemporal dementia (FTD) was also considered (especially in light of her young age with respect to a neurodegenerative process). An FDG-PET scan may have been helpful; however, interpretation could be limited in the setting of uncontrolled diabetes.11

Accurate diagnosis is critical for clinical management of any disease. The Food and Drug Administration (FDA) has approved 5 drugs for symptomatic treatment of AD. The first cholinesterase inhibitor, tacrine, is no longer prescribed but 3 other cholinesterase inhibitors (ie, donepezil, rivastigmine, and galantamine) are currently available. Another therapeutic option for moderate-to-severe AD is memantine, an NMDA receptor noncompetitive antagonist. All these medications are symptomatic, without disease-modifying benefits. Their main property is to counterbalance the neurotransmitter disturbances of AD. No disease-modifying therapies to prevent or decrease production or aggregation of Aβ and tau or clear them from the brain have been successfully developed yet.12

If genetic and biomarker testing had been done earlier for Ms. K, it would have clarified diagnosis, and earlier treatment would have been considered. Ms. K may have been able to participate in clinical research if she met participation criteria.

Although early-onset dementia is a diagnostic challenge that may not be considered by clinicians because of rare occurrence, it can pose significant problems for the patient and family. In this case report, we point out the value of using available biomarkers to aid in clinical diagnosis. This can help guide further evaluation if negative and appropriate management when positive, as well as identify people for clinical drug trials. Likewise, accurate early diagnosis will likely be extremely valuable when disease-modifying treatments are available.

GAK and IJG report no disclosures.

Convention Question: What Aspect of Sleep Hygiene Is Most Difficult For People To Achieve?