Consider surgical interventions when symptoms include motor complications that affect quality of life despite optimized pharmacotherapy.

Surgical treatment for Parkin-son's disease (PD) was popular in the 1950s when it was observed that thalamic lesions greatly reduced tremor. However, with the introduction of levodopa in the 1960s, surgical interventions were done less frequently, until the turn of the 21st century, when there has been a resurgence of surgical interventions for PD.

Patient selection and case management pre- and post-operatively involves a multidisciplinary team consisting of a movement-disorder neurologist, a stereotactic and functional neurosurgeon, and a neuropsychologist. The movement-disorders neurologist ensures proper diagnosis and pharmacological treatment, and that the likely outcomes of surgical intervention are aligned with the patient's goals. The neurosurgeon evaluates surgical risks with respect to patient comorbidities and reviews potential complications of surgery with the patient. The neuropsychologist performs comprehensive testing to determine which cognitive domains might be impaired and ensures that behavioral disorders are identified and treated. Additional team members may include physiatrists, rehabilitation therapists, psychiatrists, neuroradiologists, neurophysiologists, and social workers.

Candidate selection for surgical interventions is patient specific and can be challenging. There are many factors that must be considered in the decision to proceed with elective surgery including the patient's personal, professional, and social situation. Consequently, the time to consider neurosurgical treatments varies among patients. The movement disorders neurologist should discuss the pros and cons of neurosurgery including the types of interventions as well as alternative nonsurgical treatment options (eg, drug delivery systems.)

Timing of Patient Selection
In general, appropriate candidates have disabilities in performance of activities of daily living (ADL), tasks necessary for employment, symptoms that impair their quality of life, and worsening of symptoms despite optimal pharmacological therapy.1 It can be a great challenge to identify patients meeting these basic criteria. Importantly, unnecessarily delay of surgical treatment may result in unwanted outcomes including unemployment or loss of independence that could have been avoided with more timely intervention. In some cases, surgical treatment may provide greater benefits than the best pharmacological treatment, such as in the case of tremor.2

Selection Criteria
If surgical intervention is to be performed with the patient awake, the patient must have the mental and physical stamina to endure a lengthy and demanding procedure and be cognitively healthy with low enough levels of anxiety to provide useful intraoperative feedback. Patients with dementia tend to become more confused intraoperatively, making them unable to provide reliable reports of adverse effects or fully participate in the procedure to determine clinical efficacy. Surgery may also worsen preexisting cognitive deficits.3-5 In general, with the exception of tremor, symptoms that do not improve with levodopa tend not to respond to surgery. Patient selection screening criteria for clinical and research evaluations of PD have been previously reported.6-8 Additional contraindications include severe uncontrolled hypertension, cancer, or cardiac, renal, hepatic, or pulmonary diseases (Box).

The most commonly used surgical treatments for PD are ablation and deep brain stimulation (DBS). The first ablation techniques were radiofrequency-induced lesioning. In this procedure, the initial surgical methodology is comparable to DBS in that it includes neuroimaging, placement of a stereotactic headframe, and implantation of an electrode with physiological confirmation of the target site. Next, the electrode is heated using alternating current, which causes a thermally induced lesion. The electrode is then retracted. With the advent of DBS and current use of nonincisional ablation techniques including gamma knife (GK) and MRI-guided high-intensity focused ultrasound (MRGFUs), radiofrequency ablation has become uncommon. The Table summarizes the advantages of ablation and DBS.

Deep Brain Stimulation
Equipment. The equipment for DBS includes an electrode with 4 to 8 contacts implanted at designated targets held stationary to the skull with extension connection wires running under the scalp and skin of the neck to an implanted pulse generator (IPG) that is typically positioned subclavicularly. Stimulation settings are adjusted by programming the IPG with the following parameters: contacts selected (cathode and anode), frequency, pulse width, and voltage/current. In the initial programming session, each contact is tested as stimulation is gradually increased while assessing for clinical efficacy and stimulation-induced adverse effects. Algorithms for DBS programming are available.9 Potential stimulation-induced adverse effects are primarily a result of unwanted spread of stimulation to adjacent regions with some well-known exceptions (eg, stimulation of the subthalamic nucleus [STN] inducing dyskinesias).10

Modulation Targets. The main targets for DBS in PD are the globus pallidus pars interna (GPi) and STN. The ventralis intermedius (VIM) may be implanted as this is an effective target to reduce tremor but other symptoms of parkinsonism are not improved. Tremor is improved by 60% to 70% with VIM DBS with long-term benefit reported more than 10 years postsurgery.11,12 However, as the disease progresses, other symptoms of parkinsonism not adequately treated with VIM DBS become challenging to treat pharmacologically. STN and GPi DBS improve all cardinal features of PD, tremor, rigidity, bradykinesia, and dyskinesias.

Consequently, a location within the central portion of the GPi is preferred.10 In STN DBS, the dorsolateral portion that corresponds with the sensorimotor region is targeted.13

Bilateral GPi or STN DBS results in similar overall motor effects with an estimate of 30% to 50% improvement in motor symptoms and in ADL.14-16 Selection of GPi versus STN depends on the patient's goals and the surgical team and center's preferences. STN DBS results in approximately a 50% reduction of dopaminergic medication, whereas GPi stimulation results in minimal change. Unlike in STN DBS, which reduces dyskinesias by reducing medication, GPI stimulation results in direct improvement of dyskinesias.17 Overall, there is some evidence that GPi stimulation may have less worsening in cognitive and behavioral measures compared to STN. However, when these differences are evident, they are modest, and it is not clear if the reduction of medication with STN DBS may be the greater factor contributing to this finding.16,18

Future Directions. Other targets for DBS being investigated include the pedunculopontine area, zona incerta/posterior subthalamic area, and substantia nigra pars reticulate. In addition, directional leads that steer current away from unwanted targets are being utilized and could be of great value in the setting of suboptimally positioned electrodes.19 Closed-loop systems that adjust the amount of stimulation based upon neurophysiological signatures, local field potentials, are also in development and may improve battery life and clinical efficacy. Finally, the use of genetic testing may be of great value because individuals with increased risk of developing cognitive impairment (eg, glucocerebrosidase (GBA) mutation, may have poorer outcomes with DBS.20

Gamma-Knife Radiosurgery
GK radiosurgery is a nonincisional treatment that delivers gamma radiation at a dose of 120 Gy to 180 Gy. Lower dosages of gamma radiation 130 Gy to 140 Gy may be preferred to reduce potential adverse effects.21-24 GK radiosurgery in movement disorders has been used mainly to target the VIM for the treatment of tremor. The vast majority of studies have been performed unilaterally because of the potential increased risk of adverse effects related to inadvertent involvement of the corticobulbar tract. In general, clinical efficacy is comparable to conventional radiofrequency ablation with tremor improvement of 70% to 90% and functional improvement of approximately 70%.21-24 Recurrence of tremor after initial improvement has been reported with a recurrence rate of 2.8% after 24 months but occurs most commonly within 3 months likely reflecting resolution of edema.24,25

There is often a delay before any improvement is observed after GK radiosurgery with delays until improvement of 1 to 12 months (median at 5 months).22,23,29 The adverse effects in GK radiosurgery are problematic, as there is currently no way to predict the lesion that develops postoperatively involving unwanted structures. Comparable to the delay in clinical efficacy, adverse effects can develop weeks to 10 months postoperatively. In addition to concerns of inadvertent spread of radiation to the internal capsule, in GK pallidomotomy, radiation of the optic tract that is ventral to the GPi can occur with damage induced at low dosages of radiation.30

MRI-Guided High-Intensity Focused Ultrasound
MRGFUs is a nonincisional and relatively new technology for delivering precise thermal ablation to targeted structures in the brain. The ExAblate system (Insightec, Tirat Carmel, Israel) uses 1024 hemicircumferentially orientated ultrasonic transducers to deliver energy to predetermined coordinates. Escalating energy increases heat at the target, which can be measured via MR thermography. These initial lower-temperature sonications (~52° C) produce transient temperature and clinical changes. Based on the response, the target can be moved appropriately before a final 60° C sonication is performed to create a permanent lesion. MRGFUs has been FDA-approved for unilateral targeting of the VIM to treat essential tremor. However, it is currently an experimental therapeutic modality for PD.

MRGFUs has used to target four nuclei in clinical trials to treat patients with PD to date: the VIM, the STN, the GPi, and the pallidothalamic tract. The most extensive study involved treating PD tremor via thalamic ablation enrolled 27 subjects and randomized them to active treatment or sham treatment.31 After 3 months, there was a significant difference of 36% improvement of on-medication tremor scores in the active treatment group compared to the sham group. Similar clinical efficacy in MRGFUs thalamotomy has been reported by other groups with sustained benefit as long as 6 months postprocedure (Figure).32 Adverse effects of MRGFUs thalamotomy are divided into intraprocedural and postprocedural. Intraprocedural adverse events included cephalgia, nausea, neck/shoulder pain, and vertigo. Postprocedural adverse effects include transient and persistent symptoms including paresthesia and ataxia occurring as late as 3 months after the procedure. 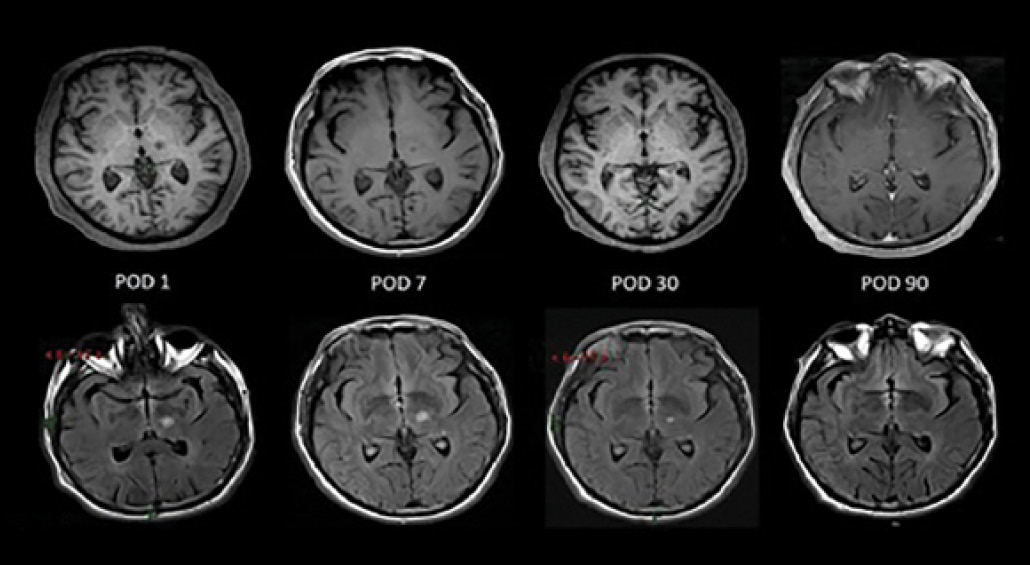 Figure. Example of evolution of a unilateral MRGFUs thalamotomy at 1 day, 7 days, 30 days, and 90 days posttreatment. Edema is maximal in the immediate postprocedural setting. By 90 days, only a small area of T2 hyperintensity (top row) and T1 hypointensity (bottom row) remains. This evolution is similar to that seen after radiofrequency lesioning.

An open-label study of unilateral subthalamotomy in 10 patients with tremor-dominant PD33 showed improvement of symptoms using the UPDRS score, from a baseline mean of 16.6 to a mean of 7.5 measured 6 months after the procedure during the off-medication state. Persistent adverse effects present 6 months postprocedure, included dyskinesias in the on- and off-medication states, speech disturbances, anxiety, fatigue, and weight gain. A larger randomized, controlled study of unilateral focused-ultrasound subthalamotomy is being planned.

There is one published case report of unilateral MRGFUs pallidotomy that resulted in marked improvement in dyskinesias and parkinsonism with no adverse effects.34 A large, multicenter unilateral MRGFUs pallidotomy study is currently underway. Finally, there has been a single report of pallidothalamic tract lesioning performed in 9 patients with PD who subsequently had UPDRS score improvement of 61% and reduction of dopaminergic medication by 50%.35

In PD, surgical interventions should be considered when symptoms progress to include motor complications that affect patients' quality of life despite optimized pharmacologic treatments. Patients should be evaluated by centers with multidisciplinary teams that have the expertise in patient selection, operative procedures, and postoperative management. With advancements in technology, novel DBS electrodes and closed-loop systems will become more readily used. Ablation treatments including GK and MRGFUS are currently being studied in PD.

The Role of Exercise in Treating Parkinson's Disease