Carcinoma of the tongue is a rare secondary cause.

Glossopharyngeal neuralgia (GPN) is a rare and painful cranial neuropathy most commonly affecting people after the sixth decade of life. GPN is often confused with trigeminal neuralgia.1 The International Headache Society (IHS) criteria define GPN as short paroxysms of abrupt and severe unilateral pain in the posterior part of the tongue, tonsillar fossa, pharynx, and ear.2 The painful paroxysms are commonly provoked by swallowing, talking, or coughing. Symptomatic causes of GPN include oropharyngeal malignancy, peritonsillar infection, and vascular compression.

The typical cause of GPN is usually attributed to pulsatile neurovascular compression of the glossopharyngeal and vagus nerve rootlets3 or to hyperexcitability of the glossopharyngeal nerve itself.1 The syndrome can also be associated with cardiac syncope.4 Rare secondary causes of GPN that have been reported include oropharyngeal malignancy; benign tumors, primarily schwannomas5-8; or peritonsillar infections.2,9,10

To the knowledge of the authors, there have been only 3 previous descriptions of a newly diagnosed case of GPN as the initial presentation of an occult carcinoma of the tongue. We describe a fourth such case, which was unique in that the tumor was not found on oral examination but was only detected with CT of the neck. We propose a potential pathophysiology and suggest recommendations for the recognition and management of similar cases.

A man aged 50 years presented to the headache center with a 3-month history of superficial pain with an aching and burning quality in the posterior aspect of his left upper palate and tongue and deep lancinating pain in his left ear. The pain was side-locked in nature and did not migrate to the right side. There was no prior history of significant headaches, facial, or oropharyngeal pain. In the first month, the pain occurred intermittently in all of the affected regions, lasting from hours to days. Subsequently, the patient experienced a continuous level of moderate pain, graded 7 out of 10 in intensity, in the affected regions, which was exacerbated to excruciatingly severe pain, graded 9 out of 10 in intensity, by drinking hot or cold liquids, swallowing, chewing, yawning, or snoring. These triggered pain spikes lasted from seconds to minutes. No syncopal or convulsive episodes were noted.

Although the patient had a past medical history of alcohol and tobacco use, his last reported use of either was more than 30 years prior to presentation. Previous evaluations by an otolaryngologist and dentist were unrevealing. Physical and neurological examination findings were normal. Specifically, there were no trigger zones within the preauricular or postauricular area, the neck, or the external auditory canal. Findings on routine hematological tests including complete blood count, basic metabolic profile, liver function tests, and thyroid function tests were unremarkable. There were no findings on brain MRI with and without gadolinium or magnetic resonance angiography (MRA) of the brain and skull base. Oxcarbazepine titrated up to a dose of 600 mg twice per day was ineffective for pain relief. 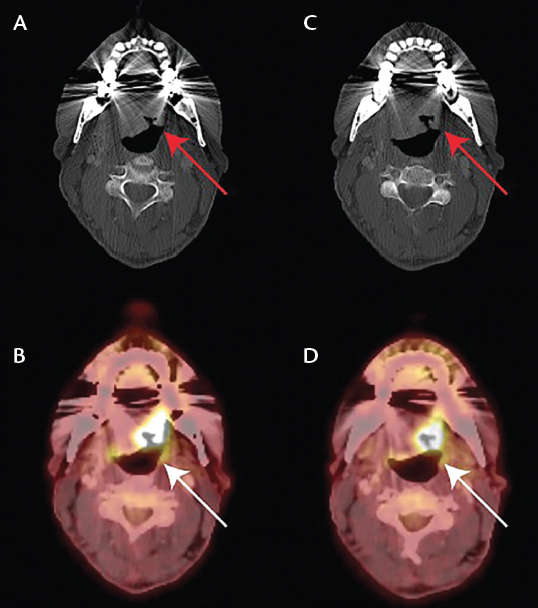 Figure 1. Consecutive slices of an axial CT (A, C) showing large ulceration in the left side of the base of the tongue (red arrows). PET imaging at corresponding slices (B, D) showing increased fluorodeoxyglucose (FDG) avidity within the ulceration (white arrows).

Subsequent consultation with a head and neck surgeon led to identification of a tumor at the base of the left side of the tongue that was not apparent on oral inspection. Contrast-enhanced axial CT scans of the neck showed a large ulceration in the left side of the base of the tongue extending towards the lateral oropharynx (Figure 1). Fluorodeoxyglucose-positron emission tomography (FDG-PET) revealed a hypermetabolic mass extending from the right of midline into the posterior base of the tongue on the left consistent with a tumor and a level 2A hypermetabolic lymph node, 1.5 cm in diameter, suggestive of metastatic disease (Figure 2).11

The histopathological analysis of a surgical biopsy specimen showed the lesion to be a squamous cell carcinoma that was positive for human papillomavirus, suggestive of primary disease. Over the next 2 months, the patient received 35 treatments of radiation therapy and 3 rounds of chemotherapy with cisplatinum. After the first week of radiation therapy, he was completely pain-free. At 24 months follow-up, the patient remains free of pain.

This patient presented with a 3-month history of side-locked pain in the left upper palate, tongue, and ear. The intensity of the pain was exacerbated by chewing, swallowing, yawning, and snoring. The quality of pain, location, duration, pattern of recurrent attacks, and precipitating factors were all suggestive of a diagnosis of symptomatic GPN, using the terminology in the 2nd edition of the IHS guidelines.2,9 However, there were several worrisome features in the patient’s history that suggested a secondary cause of GPN.

Typical GPN is characterized by recurring paroxysmal attacks of severe unilateral pain in the area of the glossopharyngeal nerve distribution. The pain is often described as electric shock-like, shooting, or stabbing, and lasts for a few seconds to 2 minutes. These attacks are precipitated by swallowing, coughing, talking, or yawning, and are not attributed to another disorder.

Atypical features of GPN include occurrence in a person younger than the sixth decade of life, strictly side-locked and continuous oropharyngeal and auricular pain, a subacute presentation with increasing frequency and severity, and lack of pain relief after treatment with oxcarbazepine. These discrepancies from classical GPN raised concerns that a lesion caused the symptoms, and a secondary cause should be investigated and identified as was done in the case described.

Occult carcinoma of the tongue presenting as GPN has been rarely reported. The Table summarizes three prior reports of GPN secondary to carcinoma of the tongue, as well as the present case. The current case is unique in that the tumor was not identified upon oral examination. It is notable that in all four cases, no other headache types were reported.

Primary tumors in the vicinity of the glossopharyngeal nerve distribution have been associated with GPN. These include schwannomas2,8 and a report of a left-sided mucoepidermoid carcinoma proposed to have originated in the salivary glands that extended into the region of the tongue.12 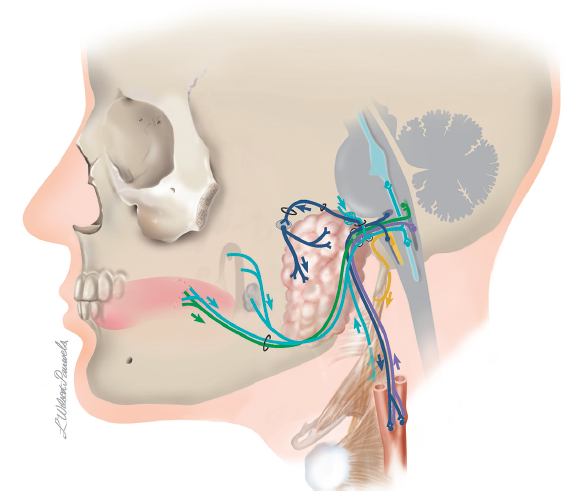 We postulate that the mechanism of referred pain from the base of the tongue tumor to the ipsilateral ear, upper palate, and tongue could be secondary to either direct tumor invasion or compression of the glossopharyngeal nerve, which has convergence of general visceral afferents, general sensory afferents, and special sensory afferents in the medulla (Figure 3). General sensory afferents project sensory input from the posterior one-third of the tongue, tonsil, skin of the external ear, internal surface of the tympanic membrane, and pharynx to the inferior glossopharyngeal ganglion, which then projects to the spinal trigeminal tract and spinal nucleus of the trigeminal nerve located in the medulla. Thus, a tongue lesion that infiltrates or compresses the glossopharyngeal nerve may refer pain to the ear and upper palate. This is consistent with the observations that reflex otalgia can be linked with oropharyngeal tumors.13

In summary, this case demonstrates that a clinical presentation compatible with glossopharyngeal neuralgia, even with normal dental and otolaryngology examinations, does not exclude an underlying malignant etiology. Thus, although tumors are given as a possible cause for GPN in the IHS classification manual (2nd edition), they have been rarely described, and it is important to provide examples for the different pathologies that can trigger GPN. Furthermore, MR imaging of the brain alone is insufficient to exclude a secondary cause of GPN. A thorough oropharyngeal examination and imaging of the neck with either MR or CT should be obtained for these cases. The use of FDG-PET was also helpful in identifying the metabolic changes that are associated with cancers.