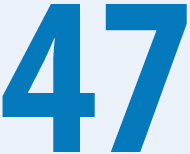 The number of technologies identified in a new review study that assess limb bradykinesia in Parkinson’s disease. Of these technologies, 17 offered home and clinic-based assessment while 30 provided clinic-based assessment only. Of note, 19 of the 47 technologies assessed bradykinesia only, whereas 28 assessed other parkinsonian features as well. The authors also observed that 33 of technologies have been described in additional PD-related studies, whereas 14 are not known to have been tested beyond the pilot phase. They concluded that technology based tools offer advantages for measuring limb bradykinesia and to assess response to intervention in clinical trials or routine care.

The combination of an outpatient Deep Brain Stimulation screening tool known as STIMULUS and comprehensive information material can lead to greater acceptance of DBS in patients with Parkinson’s disease, according to results from the CARE Monitory study. Over a 16-month period, researchers evaluated the refusal or consent to show up at a DBS center for patients who were deemed appropriate candidates for DBS by neurologists using STIMULUS. The patients were also given information material and counseling about DBS. They found that 43.2 percent of patients pre-selected as eligible for DBS agreed to show up at a specialized DBS center to undergo further diagnostic assessment. The patients’ ages, PD classification, and discussion regarding the side-effects of dopaminergic medication as well as the optimal time frame for surgery, had a significant influence on the patients’ decisions, according to the results.

New phase 3 data suggests that the experimental inhaled levodopa, CVT-301 (Acorda Therapeutics), may offer significant improvement in motor function in individuals with Parkinson’s disease experiencing OFF periods. The SPAN-PD trial randomized 339 people with Parkinson’s disease who experience motor fluctuations to receive one of two doses of CVT-301 or placebo. All participants were on a stable regimen of oral carbidopa and levodopa, and were also maintained on their other existing Parkinson’s disease therapies. Results showed that the UPDRS III change for the higher dose of CVT-301 was -9.83 compared to -5.91 for placebo. Meanwhile, key secondary endpoints, measured at week 12, include the proportion of participants achieving an ON state within 60 minutes of treatment and maintained at 60 minutes, as well as change in UPDRS III score at 10 and 20 minutes following treatment.

Acorda Therapeutics is conducting two studies to assess the long-term safety profile of CVT-301, with up to 12-month data expected soon. The company also indicated that it plans to seek FDA approval of the therapy, which is an inhalable formulation of levodopa, by the end of the second quarter, with an application in Europe targeted by the end of the year.

Precision Medicine: How Advancements in Imaging, Delivery, and Patient Comfort are Increasing the Relevance of Deep Brain Stimulation