Researchers have shown that a weak electric “noise” can improve balance and motor skills in patients with Parkinson's.

The management of Parkinson’s disease, especially in its later stages, necessitates a broad therapy program. The death of dopamine-generating cells in the substantia nigra lets down the guard of the mid-brain and the hallmarks of the condition begin to proceed: shaking, rigidity, slow movements, and more. To various degrees and with various patient profiles, pharmacotherapy provides relief.

But the correction of balance issues remains largely unsolvable from the pharmacy counter. Instead, researchers from Sweden hope their newly developed device can fill the gap.

A proof-of-concept study published online in Brain Stimulation found short-term use of stochastic vestibular stimulation (SVS) was safe, improved corrective postural responses, and may have a small positive effect on motor symptoms in PD patients off treatment.

The study authors investigated the safety and possible effects of SVS alone and combined with levodopa in a double-blind placebo controlled crossover pilot study of 10 patients with PD. A mixed model analysis showed that SVS improved balance corrections after a backward perturbation and shortened the postural response time. Importantly, patients did not detect when SVS was active, but researchers noted SVS increased nausea after taking levodopa in two patients. The follow-up study will test the device as a portable pocket-sized stimulator.

Practical Neurology™ spoke with Filip Bergquist, Associate Professor at the Sahlgrenska Academy, and a researcher of the study, to learn more. 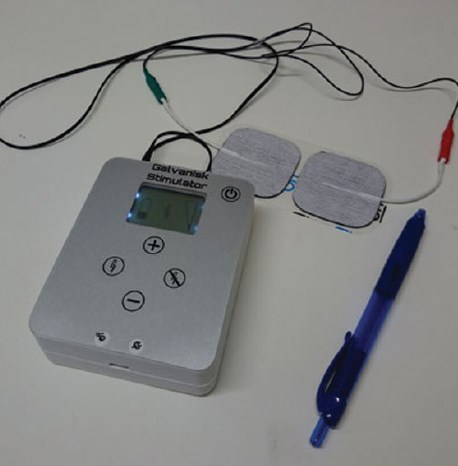 What can you tell us about the portable stimulator in regards to its inception and technology?

Dr. Bergquist: The technology of the device is similar to a TENS-device, and the principle of galvanic stimulation of the vestibular nerve/end organs is a long established technique. What is special with the particular setup that we use is that the currents delivered are stochastic and activate the vestibular system without creating an illusion of movement. In fact, when appropriate current levels are used you are not aware of whether the current is on or not.

The mechanisms of action of stochastic vestibular stimulation are not fully understood, but improved balance has been demonstrated previously in both healthy controls (even astronauts, see Mulavara et al 2011 Exp Brain Res), and patients with neurological disease. We have reason to believe, however, that there are further advantages in situations with impaired dopamine transmission like Parkinson’s disease. One reason for that is that in a previous animal study we could demonstrate that stochastic vestibular stimulation increases GABA levels in the substantia nigra reticulate. This is an effect that, given our knowledge about basal ganglia loops, will facilitate movement initiation, and is similarly found after administration of levodopa (Samoudi et al. 2012, PLoS One). In collaboration with a research group at Universities Space Research Association we have made a prototype stimulator with a very simple interface that we can use in long-term studies in patients’ home environments. This will log the current levels and device exposure.

In the recent study we found that balance reflexes improved in particular in unmedicated patients. Because impaired balance is a huge problem where effective treatments are wanting, we will direct upcoming studies in particular to PD patients with balance problems, and possibly freezing of gait.

How does it differ from other movement disorder devices?

Dr. Bergquist: As to the difference from other movement disorder devices, the best comparison would be with STN-DBS, which unlike our method has to be invasive. It is known that STN-DBS, like stochastic vestibular stimulation, increases GABA-levels in the substantia nigra reticulata (and also GPi), but our impression thus far is that our method is not likely to be nearly as effective on arm and leg symptoms in PD as STN-DBS. Our findings are also from a small study and have to be replicated, but improved Parkinson symptoms have been suggested previously with vestibular stimulation in a couple of Japanese studies.

Is there a particular patient profile that you’re targeting, or any type of PD patient who might have a better chance at success?

Dr. Bergquist: Our best guess is that patients with freezing of gait and balance problems that do not respond well to levodopa treatment are the ones where this treatment has best chances to be useful. If we can demonstrate more general improvements, it is also possible that the method could be used in patients where brain surgery is contraindicated due to frailty or age.

What’s next for this technology?

Dr. Bergquist: We will start clinical long-term studies in the coming year to determine if the effects are clinically useful enough to make a difference in patients well being and function and if it outweighs the hassle it will still be to use the device. n

The Most Important Element of Your Financial Plan: Why Flexibility is Crucial to Meeting Long Term Goals, Part II

Tinnitus and Otalgia in a 41-year-old Woman