Stroke Falls to No. 5 Cause of Death in US

Stroke has dropped from the nation's fourth-leading cause of death to Number 5, according to new federal statistics. It is the second time since 2011 that stroke has dropped a spot in the mortality rankings.

According to the Centers for Disease Control and Prevention report, stroke swapped positions with unintentional injuries, which killed 1,579 more people than stroke in 2013. The stroke death rate dropped slightly, from 36.9 percent in 2012 to 36.2 percent in 2013. While the death rate from heart disease dropped somewhat between 2012 and 2013, it remains the Number 1 cause of death in the nation. Cancer is the second-leading cause of death, followed by chronic lower respiratory diseases.

The decline in stroke deaths may be due in part to improvements in treatment and prevention, said Ralph Sacco, MD, past president of the American Heart Association and chairman of neurology at the University of Miami Miller School of Medicine.

“There are more stroke centers now operating in the US, and the acute care of stroke is improving,” said Dr. Sacco, who in 2010 became the first neurologist to be named American Heart Association president. “However, although mortality from stroke is dropping, we know that the number of people having strokes in the US is rising each year due to the aging of our population and other signs that strokes have increased in younger groups.”

Stroke also remains a leading cause of disability in the US. In fact, the number of people having strokes – often with painful and debilitating after-effects – remains a major cause of concern. “Stroke is more disabling than it is fatal,” said Dr. Sacco.

One In Five Adult Epilepsy Patients Have ADHD Symptoms

Those in the study who experienced ADHD symptoms also reported higher rates of anxiety, depression and worse seizure frequency. The study, which involved 1,361 adult epilepsy patients, is published online in Epilepsia.

“This study reinforces the fact that we have to broaden our view of what epilepsy entails,” he said. “Our patients may also have psychiatric comorbidities, and screening for and treating these may make a great difference to patients in their family, school and work lives.”

A Phase II study of the novel molecule sNN0029 to treat Amyotrophic Lateral Sclerosis (ALS) has been initiated.

sNN0029 is a recombinant human vascular endothelial growth factor (rhVEGF-165) that is administered intracerebroventricularly (ICV). Administration of sNN0029 in animal models of ALS increased survival of motor neurons that degenerate and are a leading cause of the disability and symptoms in patients with ALS. Animals with the G93A-SOD1 mutation, known to be associated with ALS in humans, who receive rhVEGF-165 survive longer and show improved muscular strength compared to controls. Based on its mechanism of action, i.e. direct and indirect effects preventing death of motor neurons, sNN0029 may represent a unique treatment opportunity for patients with ALS.

An earlier study of sNN0029 in ALS patients at doses up to and including 2μg/day indicated in preliminary analyses evidence of significant benefit especially in patients at the highest dose on multiple efficacy measures, compared to placebo. Treatment with sNN0029 was well tolerated and many patients have received treatment for up to two years and more.

The new study will include patients with ALS who will receive 4μg/day as a continuous treatment in a randomized, placebo-controlled double blind fashion using an implantable pump and brain catheter. The trial has been approved by Health authorities and is currently recruiting patients to clinical sites in Belgium and the Netherlands. It will enroll 18 patients who will be assessed for safety and efficacy for three months as part of this study. Multiple clinical safety and efficacy rating scales will be used in combination with biochemical analyses and neurophysiological examination.

FDA has approved Duopa (carbidopa and levodopa) enteral suspension for the treatment of motor fluctuations for people with advanced Parkinson's disease. Duopa is administered using a small, portable infusion pump that delivers carbidopa and levodopa directly into the small intestine for 16 continuous hours via a procedurally-placed tube. It was approved by the FDA as an orphan drug. 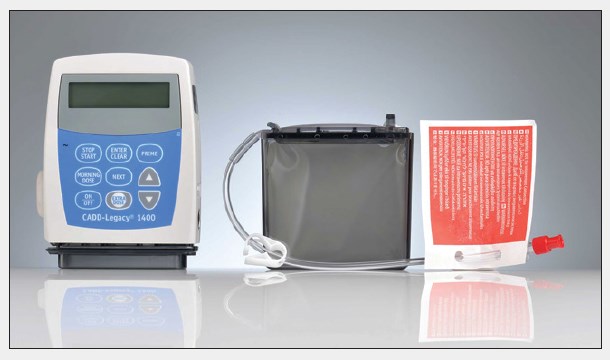 “There is unmet need for treatment options for patients with advanced Parkinson's disease. As the disease advances, it can be difficult to control motor features,” said C. Warren Olanow, MD, Professor, Department of Neurology and Department of Neuroscience, Mount Sinai School of Medicine, and lead investigator of the DUOPA pivotal trial. “In clinical trials, DUOPA was shown to significantly reduce the amount of off time advanced Parkinson's disease patients experienced.”

The DUOPA approval is based on a Phase 3, 12-week, double-blind, double-placebo, active control, parallel group, multi-center trial (N=71) that compared the efficacy and safety of DUOPA to oral, immediate-release (IR) carbidopa-levodopa tablets in advanced Parkinson's disease patients. The study showed that DUOPA significantly reduced daily (per 16 waking hours) mean “off” time at 12 weeks by four hours, which resulted in an average of 1.9 fewer hours of “off time” when compared to carbidopa-levodopa IR tablets.

Treatment with DUOPA was also associated with an improved mean “on” time (periods when the medication is working and symptoms are controlled) without troublesome dyskinesia (uncontrolled movement that does not interfere with normal daily activities) by four hours at 12 weeks, which resulted in an average of 1.9 hours more “on” time when compared to carbidopa-levodopa IR tablets. The most common adverse events (>7% and greater than carbidopa and levodopa immediate release) were complication of device insertion, nausea, constipation, incision site erythema, dyskinesia, depression, post procedural discharge, peripheral edema, hypertension, upper respiratory tract infection, oropharyngeal pain, atelectasis, confusional state, anxiety, dizziness and hiatal hernia.

Nearly two years after it was first rejected, FDA has approved Rytary, an extended-release oral capsule formulation of carbidopa-levodopa, for the treatment of Parkinson's disease, post-encephalitic parkinsonism, and parkinsonism that may follow carbon monoxide intoxication and/or manganese intoxication. Rytary is not for use in patients using nonselective monoamine oxidase inhibitors (MAO) inhibitors.

“The FDA approval of Rytary is an important new development for the treatment of Parkinson's disease and provides an extended-release carbidopa-levodopa product that treats Parkinson's disease,” said Fred Wilkinson, president and CEO, Impax Laboratories. “Rytary is designed to address one of the most significant unmet needs for patients living with Parkinson's disease, which is to reduce the amount of time during the day when their symptoms are not adequately controlled.”

The drug contains immediate release and extendedrelease beads, with a specific amount of carbidopa and levodopa in a 1:4 ratio, and provides both initial and extended levodopa plasma concentrations after a single dose. It may be swallowed whole or, for patients who have trouble swallowing, the capsule may be opened and the beads sprinkled on applesauce and consumed immediately.

The Rytary clinical program studied patients with early (levodopa-naive) to advanced Parkinson's disease in the U.S. and in Europe. In APEX-PD (Study 1), a trial that enrolled and randomized 381 levodopa-naive patients, the study met its primary efficacy endpoint of mean change from baseline in the sum of Unified Parkinson's Disease Rating Scale (UPDRS) Part II (activities of daily living) score and UPDRS Part III (motor skills) score for Rytary versus placebo at Week 30 (or early termination).

FDA has granted Fast Track designation for deflazacort in the treatment of patients with Duchenne Muscular Dystrophy (DMD). DMD is the most common and severe form of muscular dystrophy among children. There are currently no approved therapies for the disease in the US.

Deflazacort is a glucocorticoid with anti-inflammatory and immunosuppressant properties. Based on previous studies, it appears that deflazacort may be a new treatment option for patients with DMD. Side effects reported to date include cushingoid appearance, irritability and cataract formation.

Marathon, the company behind the therapy, is currently conducting clinical and preclinical studies of deflazacort to support approval in patients with DMD. A NDA is anticipated in early 2016. FDA previously granted Orphan Drug designation to deflazacort for the treatment of DMD.

MedCenter System is a newly created talking system to increase compliance with daily medications using the date of the month. This system emphasizes the “Date” rather than the “Day of the Week.” The “Date” is located on each pillbox and pill cavity, the visual display of the clock, and as an audible notification during the alert messages. “This repetition of the “Date” helps ensure proper medication compliance, even when the user is unsure what day of the week it is,” according to the company. The system has a suggested retail price of $69.95 with the talking LCD clock and $34.95 without it. 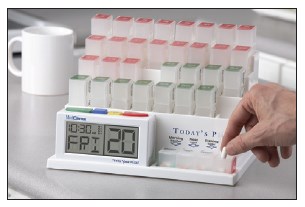 Receptos has enrolled the first patient in the SUNBEAM Phase III trial of RPC1063 in patients with relapsing multiple sclerosis (RMS). The company had previously initiated the Phase III portion of the RADIANCE trial in patients with RMS. Receptos is on track to complete this Phase III clinical development program in 2017.

In a Phase II trial of RPC1063 in RMS, RPC1063 met the primary endpoint of reduction in MRI brain lesion activity as well as secondary endpoints measuring effects on other MRI parameters. The overall safety profile of RPC1063 was consistent with results of prior trials.

RPC1063 is a novel, oral, once daily, selective sphingosine 1-phosphate 1 and 5 receptor modulator in development for autoimmune indications including RMS and ulcerative colitis.

A National Institutes of Health white paper released January 15 finds little to no evidence for the effectiveness of opioid drugs in the treatment of long-term chronic pain, despite the explosive recent growth in the use of the drugs.

The paper constitutes the final report of a seven-member panel convened by the NIH and finds that many of the studies used to justify the prescription of these drugs were either poorly conducted or of an insufficient duration.

Dr. David Steffens, co-author and chair of the psychiatry department at UConn Health says, “there's no researchbased evidence that these medicines are helpful.” He notes a need for better communication about best practices to physicians who prescribe these drugs.

Concussions and the National Football League

Dementia Insights: Nutritional Aspects of Cognitive Impairment: Its Role In Prevention and Treatment