A study published in Neurology suggests that the number of mentally stimulating activities a person does in later life, including crafts, games, reading, social activities, and computer use, correlates with decreasing risk of mild cognitive impairment (MCI) (Table). 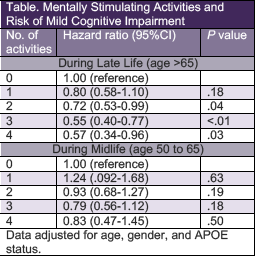 “There are currently no drugs that effectively treat mild cognitive impairment, dementia or Alzheimer’s disease, so there is growing interest in lifestyle factors that may help slow brain aging believed to contribute to thinking and memory problems—factors that are low cost and available to anyone,” said study author Yonas E. Geda, MD, MSc, of the Mayo Clinic in Scottsdale, Ariz., and a member of the American Academy of Neurology. “Our study took a close look at how often people participated in mentally stimulating activities in both middle-age and later life, with a goal of examining when such activities may be most beneficial to the brain.”

At the start of the study, approximately 1,000 men and 1,000 women completed a questionnaire about how often they took part in mentally stimulating activities during midlife (age 50 to 65) and later life (age >65). The participants were given neuropsychologic assessments in person every 15 months for an average of 5 years, during with time 532 (26.6%) developed MCI (26%).

“Our study was observational, so it is important to point out that while we found links between a lower risk of developing mild cognitive impairment and various mentally stimulating activities, it is possible that instead of the activities lowering a person’s risk, a person with mild cognitive impairment may not be able to participate in these activities as often,” Geda said. “More research is needed to further investigate our findings.”