In this study, 27,937 women, age 49 and up, were followed for a mean 19.3 years, during which 137 hemorrhagic strokes occurred (0.5%). Associations between hemorrhagic stroke occurrence and LDL cholesterol levels were examined using Cox proportional hazards models (Table) after adjustment for age, menopausal status, postmenopausal hormone use, body mass index, alcohol consumption, diabetes, hypertension, statin use, and exercise. Only women with levels of LDL cholesterol below 70 mg/dL had a statistically significant increased risk for hemorrhagic stroke. 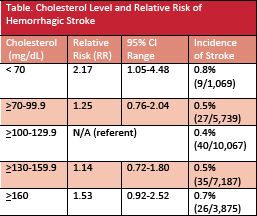 “Strategies to lower cholesterol and triglyceride levels, like modifying diet or taking statins, are widely used to prevent cardiovascular disease,” said study author Pamela Rist, ScD, of Brigham and Women’s Hospital in Boston and a member of the American Academy of Neurology. “But our large study shows that in women, very low levels may also carry some risks. Women already have a higher risk of stroke than men, in part because they live longer, so clearly defining ways to reduce their risk is important. Women with very low LDL cholesterol or low triglycerides should be monitored by their doctors for other stroke risk factors that can be modified, like high blood pressure and smoking, in order to reduce their risk of hemorrhagic stroke,” Rist said. “Also, additional research is needed to determine how to lower the risk of hemorrhagic stroke in women with very low LDL and low triglycerides.”

FDA Warns About Unapproved Devices for Diagnosing and Treating Concussion

FDA Warns About Unapproved Devices for Diagnosing and Treating Concussion