Treatment with eptinezumab (Alder BioPharmaceuticals, Bothell, WA) in the PROMISE-1 and PROMISE-2 clinical trials (NCT02559895, NCT02974153) resulted in 1 or more months free of migraine for participants with episodic or chronic migraine (Table) and no treatment-emergent adverse events. 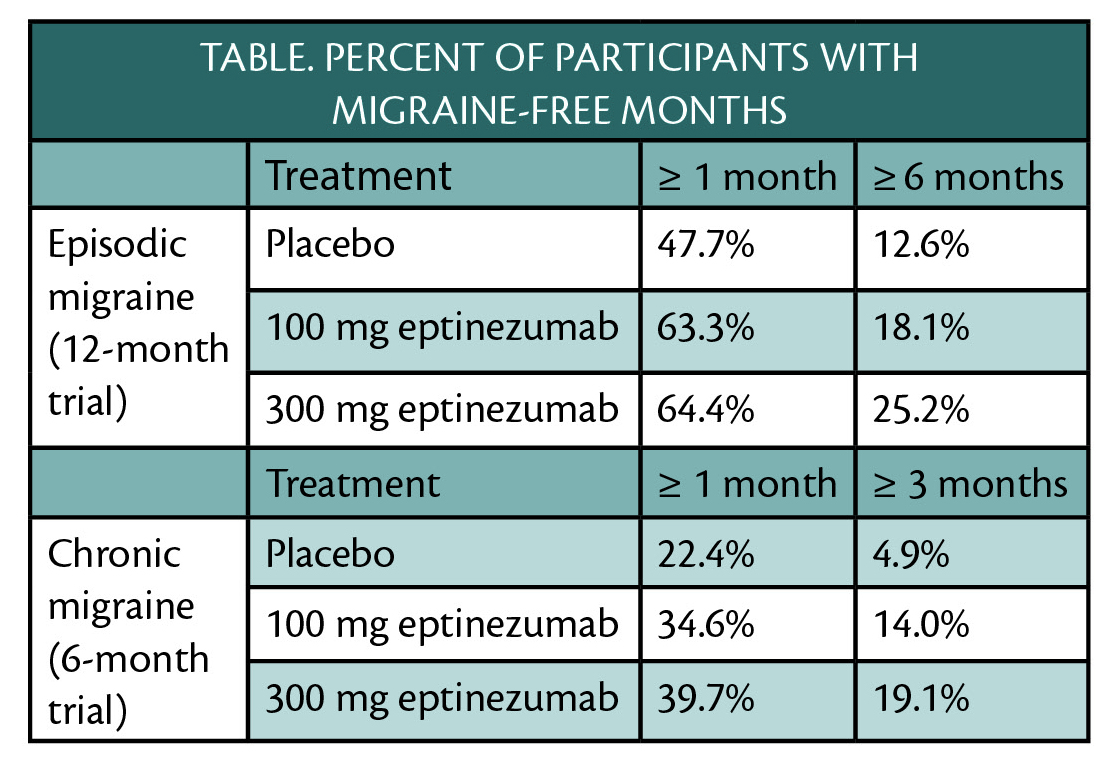 “The marked reduction in the impact of migraine as measured by the HIT-6, which was significant from the first month and sustained for the duration of the study gives us great hope that eptinezumab, if approved, can be a compelling and powerful tool for clinicians not just to relieve pain but also to significantly lessen the impact migraine has on lives of people living with migraine.”said Roger K. Cady, MD, vice president, neurology of Alder BioPharmaceuticals.

A second post-hoc analysis examined eptinezumab’s efficacy in reducing migraine severity--a significant contributor to disease burden and reduced quality of life. In PROMISE-2 people with chronic migraine eptinezumab had clinically meaningful improvements in Headache Impact Test-6 (HIT-6) scores as soon as the first month after treatment. In contrast, those treated with placebo who responded did not have improvement in HIT-6 scores until the sixth month of treatment. The HIT-6 score improvements seen with eptinezumab were maintained or improved further over the 6-month period. In addition, eptinezumab treatment vs placebo resulted in clinically meaningful improvements in Short-Form health survey (SF-36) scores as early as the first month and throughout the 6-month period.

These data were presented at the American Headache Society 61st Annual Scientific Meeting in Philadelphia, July 11-14.

The biologics license application is under review by the Food and Drug Administration (FDA), and a target action date in February 2020 has been set. If approved, eptinezumab will be the first CGRP-related migraine prevention available as an intravenous infusion.