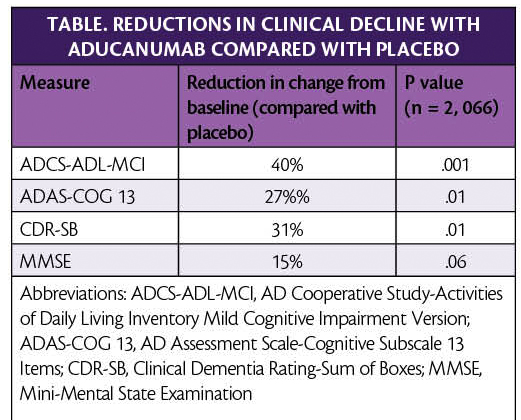 In addition to these clinical measures, individuals treated with aducanumab vs placebo in the EMERGE trial (NCT02484547) had reduced amyloid plaque burden at 26 and 78 weeks (P < .001). Additional biomarker data of tau levels in the cerebrospinal fluid also supported these clinical findings.

After consultation with the Food and Drug Administration (FDA), the manufacturers of aducanumab plan to submit a Biologics License Application for the drug in early 2020.

These data are from the full data set that became available after both the EMERGE trial had been discontinued based on futility analysis of a smaller dataset. With the larger dataset, statistically significant reductions in clinical decline have been seen in EMERGE. In addition, the trial sponsors and manufacturers of aducanumab have announced that a subset of data from the ENGAGE trial (NCT02477800) supports these findings. The ENGAGE trial as a whole, however, did not meet the prespecified primary endpoint.

The most commonly reported adverse events were amyloid-related imaging abnormalities-edema (ARIA-E) and headache. The majority of those who had ARIA-E did not experience symptoms during ARIA-E, and episodes generally resolved within 4 to 16 weeks, typically without long-term clinical sequelae.

“With such a devastating disease that affects tens of millions worldwide, today’s announcement is truly heartening in the fight against Alzheimer’s. This is the result of groundbreaking research and is a testament to Biogen’s steadfast determination to follow the science and do the right thing for patients,” said Michel Vounatsos, chief executive officer at Biogen. “We are hopeful about the prospect of offering patients the first therapy to reduce the clinical decline of AD and the potential implication of these results for similar approaches targeting amyloid ß.”

“This large dataset represents the first time a phase 3 study has demonstrated that clearance of aggregated amyloid ß can reduce the clinical decline of AD, providing new hope for the medical community, the patients, and their families,” said Dr. Anton Porsteinsson, William B. and Sheila Konar professor of Psychiatry, Neurology and Neuroscience, director of the University of Rochester Alzheimer's Disease Care, Research and Education Program (AD-CARE), and principal investigator. “There is tremendous unmet medical need, and the Alzheimer’s disease community has been waiting for this moment. I commend Biogen, the FDA, the medical community, and the patients and their study partners for their persistence in working to make today’s announcement a reality.”

The trial sponsors hope to offer access to aducanumab to eligible patients previously enrolled in studies of aducanumab and will work towards this goal with regulatory authorities and principal investigators with a sense of urgency.

The ENGAGE and EMERGE studies were discontinued on March 21, 2019, following prespecified futility analysis that relied preliminary smaller dataset from 1,748 patients who had completed 18 months of treatment as of December 2018. Biogen plans to present further detail on the new analysis of the larger dataset from EMERGE and ENGAGE at the Clinical Trials on Alzheimer's Disease (CTAD) meeting in December 2019.