Autoimmune movement disorders are characterized by an abnormal immune response against neural antigens by IgG autoantibodies. Initially, identified antigens were cytoplasmic or nuclear protein-reactive autoantibodies, typically seen in a paraneoplastic context. Subsequent discovery of cell-surface neuronal autoantibodies, however, paradigmatically shifted understanding of these autoantibodies, with the recognition that these diseases can occur without an underlying tumor.1

This knowledge informed the development of autoantibody profiles, in which several autoantibodies are tested together for specific phenotypes such as movement disorders, encephalitis, epilepsy, or neuropathies. Antibody testing varies among diagnostic, as well as specialized, research-based laboratories, and knowledge of these autoantibodies can be helpful for clinicians evaluating for autoimmune movement disorders. Algorithmic testing for autoantibody profiles is a more sensitive diagnostic strategy than physician-selected single autoantibody testing.2

Before testing, there are several practical considerations for the clinician to address, summarized in the Box and discussed in greater detail throughout this review.

2. Deciding when to test, using a structured decision-making process (a Bayesian approach) considering pretest probability and the overall usefulness of a test, within the clinical context

3. Choosing the most appropriate antibody profile because there are considerable differences in autoantibody availability and test methodology

4. Choosing whether to test in the cerebrospinal fluid (CSF), serum, or both, with the rationale behind the recommendation to test both in parallel considered

There are several major assays used in diagnostic laboratories to detect antibodies, as highlighted in Figure 1. Indirect immunohistochemistry or immunofluorescence is the mainstay of several academic laboratories, including our own, and has been used to detect paraneoplastic antibodies associated with small cell lung cancer (SCLC), breast cancer, and other cancers. The first autoantibody detected with this technique was antineuronal nuclear antibody type 1 (ANNA-1) also known as antiHu; the antigen is an RNA-binding protein.3 Testing is performed using thinly sectioned mouse or rat tissue and is often a composite of hippocampus, cerebellum, brainstem, basal ganglia, and cortex. Nonneural tissue such as gut mucosa or kidney may be incorporated for comparison.4 The sample serum or CSF is incubated with the tissue, and tissue-bound patient antibodies are then detected using antihuman secondary antibodies conjugated to enzymes or fluorescent dyes. It is imperative that diagnostic laboratories compare the patient-sample results with healthy and known-disease control samples to appropriately evaluate positive results in different anatomic structures. Interpretation remains challenging and requires a highly trained observer. Positive results indicate the autoantibody presence by specific structures stained, but an antigenic target cannot be determined using this technique.5 A secondary antigen-specific assay is often used for confirmatory testing (Figures 1 and 2). 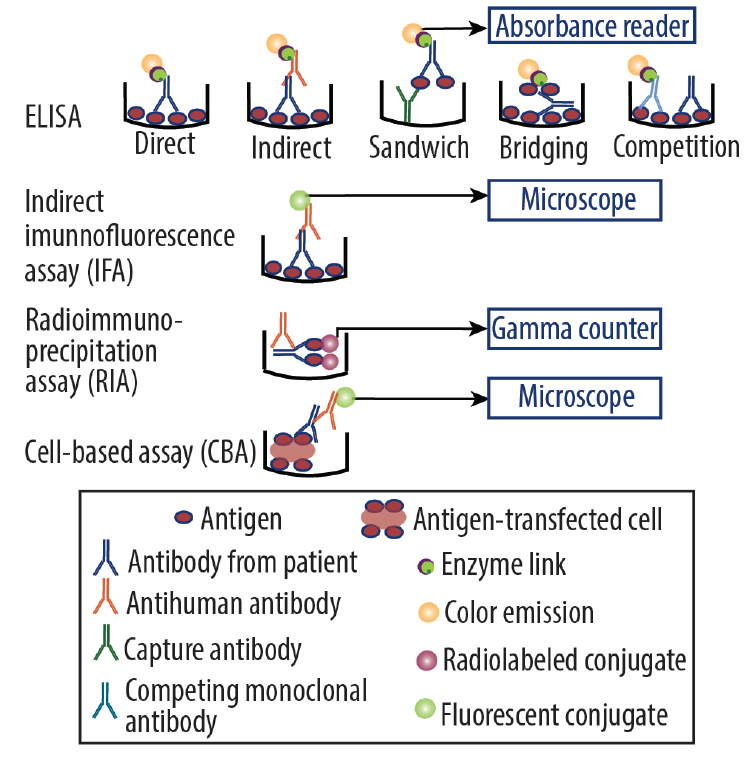 Line or western blots are often used for cytosolic or nuclear antigens because these can detect antibodies reactive with linear denatured epitopes. Line blots can detect antibodies at clinically insignificant levels causing false-positive results, but this can be mitigated with the addition of alternative test methodologies to improve diagnostic specificity.6

Cell-based assays (CBAs) commonly utilize HEK293A cells, which are useful for expressing antigens of interest in their native conformational state on the cell-surface. Although assays are typically performed with fixed cells, they can also be done live without fixation. This method is technically challenging and reserved for specific assays, such as IgG antibodies to the glycine receptor. Research laboratories will frequently utilize primary neuron cultures as a detection method, typically for novel autoantibody detection.7

Comparisons between laboratories can be difficult owing to different reference preparations and cutoffs. This is commonly experienced with GAD65 antibodies, which is most often tested using ELISA or RIA. These tests can be very sensitive and can detect low titers of antibodies. Caution should be used, however, because these antibodies—with GAD as an example—can be clinically irrelevant at low titers.

Clinical decision making is complex, and testing for autoantibodies has considerably improved diagnostic accuracy. Bayesian principles can aid understanding the overall usefulness of a test. Although sensitivity and specificity are useful indicators of the quality of a test, a clinician is often more interested in the question: “What is the likelihood of an autoimmune neurologic disorder if this test result is positive or negative?” Bayes theorem is a tool that allows us to calculate the probability of an event (an autoimmune neurologic disorder), based on knowledge of a related event (test characteristics) using the best available evidence. Bayes theorem defines the likelihood of disease, or positive and negative predictive value of a test, based on the known characteristics of sensitivity and specificity.

Bayes principles can only be used to define the positive and negative predictive values if disease prevalence is known.9 Prevalence, in this case of autoimmune neurologic disease, is the proportion of individuals who had true disease out of all who were tested. As such, when a disease is of low prevalence (ie, rare) even tests with high sensitivities or specificities can fail if the appropriate population is not tested. This emphasizes the limitations of using a test in isolation to make clinical decisions. Therefore, the pretest probability of disease should be carefully considered by the physician before ordering a specific test. This is especially true for autoantibody profiles consisting of several tests of varying sensitivities and specificities.

Clinicians should first establish the pretest probability of disease based on the clinical history and laboratory, imaging, or electrodiagnostic findings. A phenotype-driven approach in autoimmune movement disorders can help guide physicians to most appropriate autoantibodies (Table).1,10-12 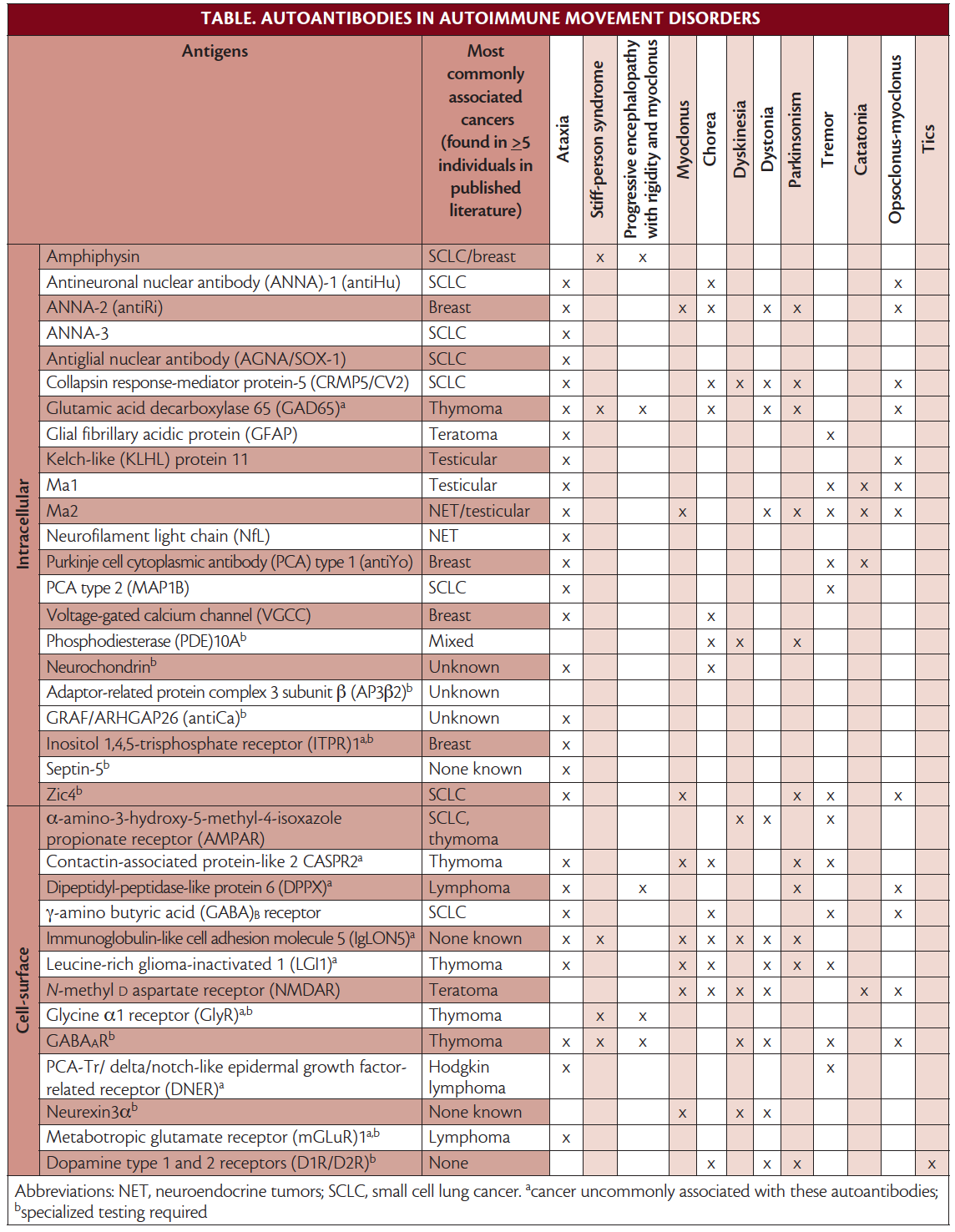 If the pretest probability of disease is low, it may be prudent to consider an alternative diagnosis, and clinicians should be mindful of false-positive results, particularly when the clinical phenotype is inconsistent, usually in the context of serum testing with CBA, ELISA, or RIA. Titers (discussed in more detail later) must also be taken into consideration, because reporting abnormal test results above an established cutoff does not necessarily indicate the disease is present. If pretest probability is high, false negatives may occur and, ultimately, a negative test may not dissuade a clinician from considering and treating a diagnosis of an autoimmune movement disorder.

After deciding to proceed with testing, there are several factors to consider for appropriate evaluation. Often, diagnostic laboratories arrange tests with complementary clinical utility algorithmically or in a cascading manner to improve diagnostic specificity and sensitivity. In the authors’ experience, “1-time” comprehensive phenotype-based testing of both serum and CSF is in the patient’s best interest, to permit early cancer diagnosis and treatment. Costs at several different levels of the healthcare system—whether direct to the patient or to the healthcare system in which a provider works—may influence testing. This can be problematic in the evaluation of rare diseases if testing is chosen primarily by cost and not testing characteristics or methodology. This is not always within the control of the physician but can be resolved by facilitating 3-way communication (physician, local laboratory director, and testing laboratory director).

Testing CSF, Serum, or Both

The question of whether to test serum or CSF frequently arises in the evaluation for autoantibody-mediated conditions. Although a sequential approach has been used, we generally recommend testing serum and CSF simultaneously to avoid delays in diagnosis and treatment. Serum testing relies on autoantibody production in the periphery but requires additional blocking of nonspecific IgGs to optimize interpretation. CSF is a “cleaner” specimen.

Paraneoplastic antibodies are generally detectable in the serum; however, occasionally, some patients have antibodies in their CSF that are not found in their serum . Our diagnostic laboratory’s experience has been that detection of clinically relevant autoantibodies is highest when both serum and CSF are tested.2 It is well established that in up to 15% of antiNMDAR encephalitis cases, antibodies are detected in the CSF only.13,14 Antibodies such as leucine-rich glioma-inactivated 1 (LGI-1) are more readily detectable in serum. In contrast, in the evaluation of aquaporin-4-IgG (AQP4) neuromyelitis optica (NMO), antibody testing of CSF does not confer additional clinical sensitivity or specificity, and serum is a cost-effective specimen.15

Another important consideration is the predictive value of using both CSF and serum. For example, glial fibrillary acidic protein (GFAP) antibodies are detectable in both serum and CSF but are more predictive of meningoencephalomyelitis—a predominant phenotype—when detected in both serum and CSF or CSF only, which is associated with numerous nonimmunologic neurologic diseases.16

Benefits of autoantibody testing are largely qualitative; the most important consideration is distinguishing positive from negative in order to confirm a diagnosis.. Quantitative assessment of antibody levels can be obtained through doubling dilutions if performed with indirect tissue immunofluorescence. RIA can provide values in nmol/L or pmol/L. Cell-based assays are reported as negative or positive. ELISAs can be reported semiquantitatively in IU/mL or in doubling dilutions.

In certain circumstances, titer cutoffs can provide an improved positive predictive value for the hypothesized disease. This is best demonstrated by GAD65 neurologic autoimmunity testing. By radioimmunoprecipitation, values above 0.02 nmol/L are consistent with a diagnosis of autoimmune (type 1) diabetes in a hyperglycemic patient. Modest elevations can also occur in up to 8% of healthy individuals and in those with nonimmunologic neurologic disease. In some people, low GAD65 titers may accompany another neurologically relevant autoantibody. A value greater than 20 nmol/L by RIA is more predictive of GAD65 neurologic autoimmunity. There is considerable variability in ELISA results and values greater than 10,000 IU/mL were recently shown to have a high correlation with GAD neurologic autoimmunity.17,18

Autoantibody titers may improve with treatment, but the relationship between titers and clinical outcomes is not well established.19 In antiNMDAR-associated encephalitis, antibody titers in CSF and serum are higher in people who have underlying ovarian teratomas and in people with poor outcomes.20 CSF titers may correlate better with antiNMDAR encephalitis disease activity, but this association is imperfect, and repeat testing is generally not recommended.20 Another example is AQP4-associated NMO, in which antiAQP4 titers were recently shown to lack prognostic or predictive utility, suggesting serial testing is unlikely to provide additional diagnostic utility.21

Serial testing of autoantibody titers is generally not recommended; objective clinical assessment is favored. Importantly, however, initial testing before initiation of any immunotherapy is recommended.

If clinical suspicion for autoimmune disease is high and rapid treatment required, we generally recommend against delaying treatment for results of autoantibody testing, which can sometimes take several weeks for results to be available.

As discussed, test results should be interpreted within the clinical context. False positives can occasionally occur in serum (but not CSF), particularly when testing is done in lower-prevalence disease populations. When suspicion for an autoantibody-mediated process is high, and testing is otherwise negative, sample evaluation at a research laboratory can be helpful in testing for autoantibodies unavailable on commercial profiles or yet unclassified antibodies.

Certain autoantibodies (eg, GAD65) have small (<10%) risk of cancer association, and may trigger a search for cancer in patients with a smoking or cancer history or other age- and sex-specific characteristics. When an autoantibody with a strong association with cancer (usually >70%)is detected, a dedicated search for cancer should ensue. Several autoantibodies may cluster and provide additional oncologic prediction, particularly in SCLC and neuroendocrine tumors.22 In women with amphiphysin antibodies, breast cancer is the most commonly identified malignancy. In contrast, in patients with amphiphysin and coexisting ANNA-1 or collapsin response-mediator protein-5 (CRMP5), the most common malignancy is lung cancer.22 Even after rigorous evaluation, an underlying neoplasm is not always identified.

Neurologic phenotype-driven neural antibody profiles aid timely autoimmune movement disorders and (in some cases) cancer diagnoses and may guide treatment and prognosis. A clinician with subspecialty expertise in autoimmune neurology, either laboratory or clinic-based, can assist in this test selection, “research-use only” testing acquisition, and management guidance.

SSS reports no disclosures
AM has received grants from Alexion, Grifols, and Euroimmun, all outside the submitted work, and has patents for septin-5 and 7-IgGs, PDE10A-IgG, MAP1B-IgG (pending), and GFAP-IgG (pending)