Antibodies to glutamic acid decarboxylase (GAD) have been identified in people with SPS and type 1 diabetes.1 GAD is a rate-limiting enzyme for γ-aminobutyric acid (GABA) synthesis, GAD is expressed in neurons, pancreatic islet β-cells, oviduct mucosal epithelial cells, and spermatocytes and spermatids in the testes. There are 2 known isoforms of GAD. The first, GAD65, is found primarily in the cytoplasm of neurons. The second, GAD67, is found predominantly in axon terminals.2 AntiGAD antibodies target inhibitory synapses in the central nervous system (CNS) and have been associated with several neurologic disorders in addition to SPS, including cerebellar ataxia (See Immune-Mediated Cerebellar Ataxia in this issue) and pharmacoresistant temporal lobe epilepsy.1-5

The literature describes a higher frequency of immunoreactivity to GAD65 than to GAD67.2 Diagnostic specificity and sensitivity of GAD65 antibodies is higher for type 1 diabetes, SPS, and other neurologic disorders.2 AntiGAD65 antibodies are seen in 60% to 80% of SPS.

AntiGAD antibodies cause lower GABA levels in the CNS, leading to a loss of neural inhibition of skeletal muscles to result in excessive unintentional muscle contractions.4,6,7 AntiGAD65 antibody levels do not appear to consistently correlate with severity of disease or treatment response. Other antibodies specific for SPS have emerged, including antiglycine receptor, antiamphiphysin, antidipeptidyl-peptidase–like protein 6 (antiDPPX), antigephyrin, and antiGABAA receptor antibodies. As a result, SPS is now considered a spectrum disorder comprised of classical SPS and variants (eg, stiff limb syndrome and progressive encephalomyelitis with tonic-clonic phases).5 There are also paraneoplastic varieties (5%-10%), frequently associated with breast, lung, or hematologic malignancies.6,8

Although SPS is likely underreported, the known incidence is 1 case per million per year with an estimated prevalence of 1 to 2 cases per million.1,6 With less than 15 GAD-seropositive cases reported, cases with onset in childhood are rarely reported.9 Patients typically present between ages 20 to 50. There is a female predominance. Coinciding psychiatric symptoms such as task-specific phobias, generalized anxiety disorder, and depression are also common in individuals with SPS and can worsen rigidity and stiffness.1 These overriding psychologic features often lead to misdiagnosis of a functional movement disorder, making early diagnosis a challenge. Suggested major diagnostic criteria for SPS include stiffness in axial and limb muscles, painful spasms, and EMG confirmation of continuous motor unit activity in agonist and antagonist muscles. Minor criteria include positive antibodies in serum and clinical response to benzodiazepines. Considering the phenotypic and antibody heterogeneity of SPS, treatment is focused primarily on symptomatic relief and improvement of mobility. When a paraneoplastic etiology is present, immunotherapy and specific tumor treatment are also appropriate.6

Treatment options for the management of SPS are summarized in the Table. A multidisciplinary approach to the care of SPS should include primary care, neurology, social work, psychiatry and psychology, and physical and occupational therapy with the patient at the center of the care team (Figure). 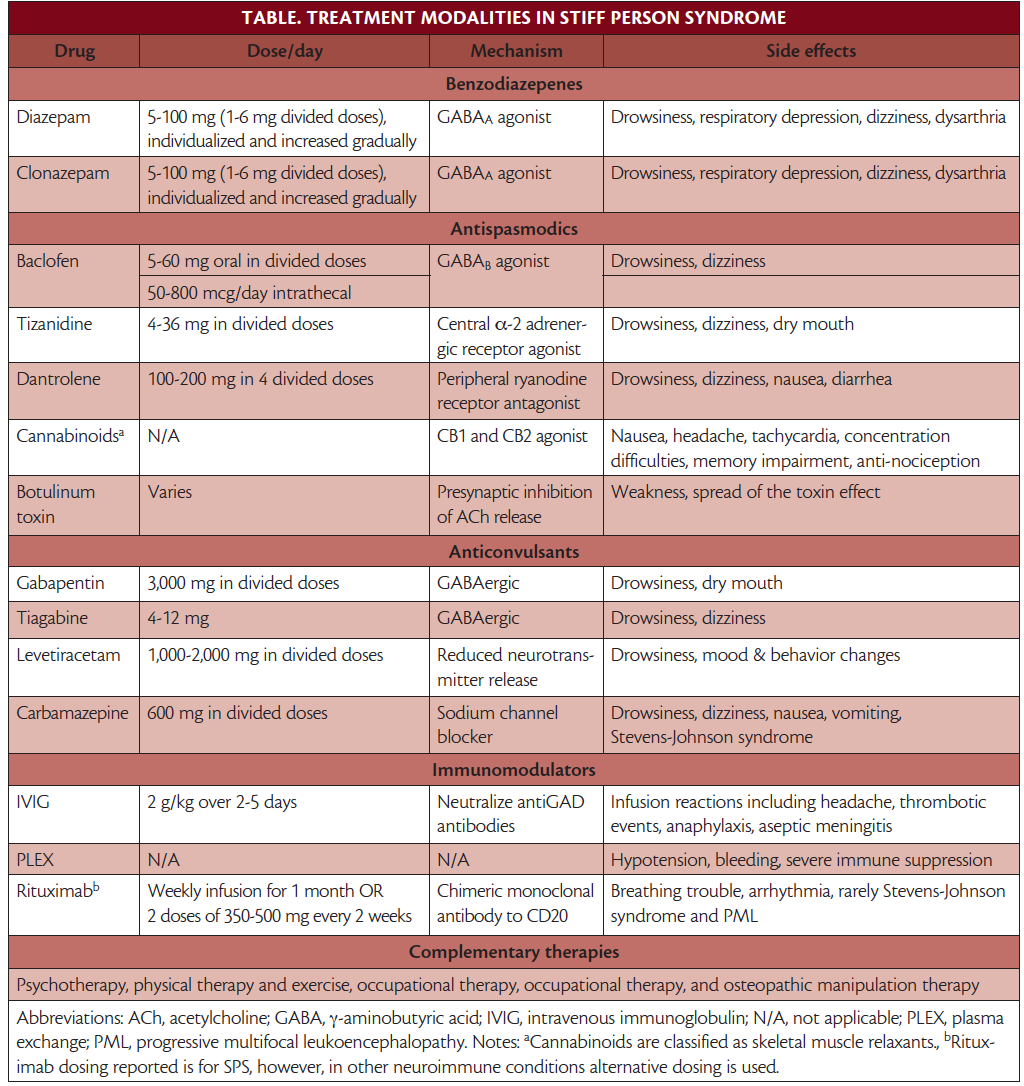 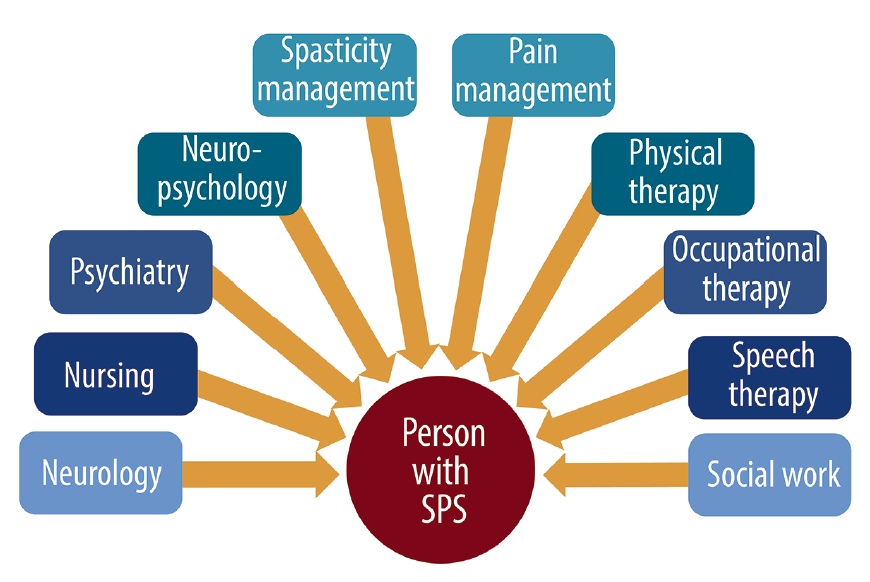 Benzodiazepines. The mainstay of treatment of SPS is benzodiazepines, which are GABAA agonists with anticonvulsant, antianxiolytic, and muscle relaxant qualities. Diazepam or clonazepam (if diazepam is not tolerated), are common initial therapies. Dosage increases of benzodiazepines are typically required for continued symptomatic relief over time (eg, diazepam may need to be as high as 120 mg/day in 4 divided doses in some long-standing cases).1 The additions or substitutions of other agents are frequently considered to avoid unwanted side effects.

Antispasmodics. Baclofen is a GABAB agonist frequently used for spasticity associated with SPS and typically the first choice when benzodiazepines fail to adequately control symptoms. Because of the disabling cognitive side effects associated with high oral doses, intrathecal baclofen (ITB) is often considered for severe spasticity. Studies have shown that ITB improves both subjective symptoms and objective EMG measures of SPS spectrum disorders.1 Although ITB is an effective therapy for reducing spasticity, use does require a commitment from the patient and their caregivers to monitor closely for any signs of withdrawal or overdose which are rare risks associated with baclofen. Tizanidine, dantrolene, and other muscle relaxants can also be considered for spasticity management. Most antispasmodics act within the cortex, brainstem, and spinal cord. Tizanidine is an α-2 adrenergic receptor agonist that reduces muscle spasms by inhibiting presynaptic excitatory neurotransmitters. In contrast, dantrolene acts directly on the ryanodine receptor in skeletal muscles, reducing calcium influx and so inhibiting muscle contractions.

Anticonvulsants. Studies have shown that gabaergic anticonvulsants (eg, gabapentin and tiagabine) help symptoms and improve EMG findings of SPS.1 Although dosages range based on a patient’s response, gabapentin 3,000 mg/day and tiagabine 4 to 12 mg/day, are commonly reported.1,8 Improvement has also been seen with sodium valproate.10 Levetiracetam 1,000 to 2,000 mg/day and carbamazepine 600 mg/day have also shown benefit for SPS.11,12

Analgesics. Pain associated with muscle spasms and rigidity can be treated with analgesics. The use of opiates typically is not recommended because of the potential for worsening symptoms. Opiates are frequently required, however, in individuals with muscle spasms and pain that are refractory to preferred therapeutic strategies. In a case report, relief of refractory symptoms was achieved with low-dose naltrexone (LDN), an agent used to reduce opiate toxicity or opiate addiction. The opioid antagonism, anti-inflammatory effects, and temporary inhibition of endorphins of LDN (2-5 mg day), which is a glial cell modulator, were thought to lead to pain reduction and an increased sense of wellbeing for the person treated. Over a 12-month period, progressive improvement and maintenance of pain, anxiety, depression, agoraphobia, and muscle tightness were reported.13

Cannabinoids and Alternative Therapies. Recent reviews on cannabis derivatives for refractory SPS symptoms describe an association between cannabinoids and reduced spasticity, muscle spasms, and neuropathic pain.8 Cannabinoids have been shown to reduce spasticity in other neurologic conditions; however, further studies need to be done to evaluate the benefits and risks in SPS.

The use of osteopathic manipulative treatment (OMT) in conjunction with pharmacologic therapy for the management of pain in a patient with SPS has been reviewed as well.14 Various OMT techniques targeting palpatory findings scheduled at 2-week intervals eventually resulted in an overall decrease in muscle tension throughout multiple body locations. These findings suggest a potential benefit of OMT as an adjunctive therapy.

Intravenous Immunoglobulin. Intravenous immunoglobulin (IVIG) is frequently used as a second-line therapy when conventional drug therapies are not considered adequate or for individuals with particularly high antiGAD antibody levels.4 Typically infused on a monthly basis at 2 g/kg, IVIG has shown promising results for treating adults and children with SPS,9 and in some individuals, IVIG has been shown to neutralize serum antiGAD antibodies.4 Given monthly for 3 months, IVIG 2 g/kg divided over 2 daily doses significantly reduced stiffness scores and heightened sensitivity scores compared with placebo treatment. In this study, 11 of 16 participants who received IVIG reported improvement in walking, fewer falls, and improved ability to perform household and work-related tasks.15 Symptomatic improvements reported range from improved stiffness to complete symptom resolution. As IVIG wears off, however, and the disorder continues to progress, efficacy may become partial or transient and additional therapies may need to be considered eventually.1,3,16

Plasma Exchange. The efficacy of plasma exchange (PLEX) for refractory SPS has not been extensively investigated. The majority of reports indicating a statistically significant improvement of symptoms with PLEX occurred in patients on concomitant medications or with concurrent type 1 diabetes mellitus. Several case reports suggest that PLEX should also be considered, in conjunction with physical therapy, to improve mobility and minimize disability.4

Rituximab. Serologic and symptomatic remission has been seen in people with SPS treated with rituximab, which is a chimeric monoclonal antibody to CD20.1 In a randomized placebo-controlled clinical trial with 24 participants, intravenously administered rituximab 1 g in 2 biweekly cycles did not result in improved stiffness scores at 6 months. Interestingly, quality-of-life scores improved significantly at 3 months for all participants, although this was not sustained at 6 months.17 Suggested reasons for the failure to demonstrate benefit in this trial include the use of a subjective scoring measure, disease heterogeneity, and symptom fluctuation caused by external factors. A single case report of rituximab treatment of SPS reported reduced eye movement abnormalities, including less diplopia, slow saccades, involuntary upward drift, and downbeat nystagmus. The person with SPS in this case report was resistant to PLEX initially, as well as intravenous methylprednisolone and IVIG before treatment with rituximab that improved ocular symptoms after 2 courses of rituximab 375 mg.16 This case report suggests there may be potential for rituximab to improve symptoms other than stiffness in SPS.

EGFR Tyrosine Kinase Inhibitors. Variable benefit has been noted with other immunomodulatory agents (eg, corticosteroids, mycophenolate mofetil, tacrolimus, azathioprine, cyclosporine, cyclophosphamide, and sirolimus). Various targeted therapies based on the particular SPS variant are also being considered. A case study reported on an individual diagnosed with paraneoplastic SPS in the setting of adenocarcinoma of the lung with tumor pathology showing an epidermal growth factor receptor (EGFR) exon deletion. In this case, after localized mass resection, symptoms were refractory to steroids, IVIG, and other supportive measures. Clinical improvement and variable decreases of antiGAD levels, however, were seen after treatment with erlotinib, a tyrosine kinase inhibitor.18

Immunomodulation and Comorbidities. When the escalation of immunosuppressive therapy is necessary, it is important to consider the potential development of additional autoimmune sequelae.3 Up to 70% of people with SPS may have additional comorbidities (eg, late-onset type 1 diabetes mellitus or epilepsy) or other organ-specific autoimmune diseases (eg, Hashimoto thyroiditis, Graves disease, pernicious anemia, or vitiligo).2

In SPS, clinical symptoms appear to improve in women who are pregnant.19 As seen with some other autoimmune disorders (eg, multiple sclerosis), the immunomodulatory shifts in pregnancy from Th1-mediated immunity towards Th2-mediated immunity are thought to be protective for the underlying autoimmune disease for both the pregnant woman and her developing fetus. With the improvement of symptoms during pregnancy, reduced use of symptomatic medications (eg, benzodiazepines) has been reported. Worsening symptoms were often seen with complete discontinuation of therapy; however, the ability to decrease agents that could lead to neonatal dependence at delivery was of particular interest to both the mother and the clinician.

Future Perspectives and a Call to Action

Future studies are being developed to evaluate the benefit of stem-cell transplants in SPS and to study the potential benefit of subcutaneous IVIG.a,b

A multifaceted approach to the care for a person with SPS may encompass symptomatic, immunomodulatory, and alternative therapies. Future research into novel and potentially repurposing of existing immunomodulating agents to slow or prevent the progression of the disease may lead to improved quality of life for patients and their families. This article is a call to action for clinicians involved in the care of patients with SPS, considering how few randomized controlled studies have been conducted in this population.