Cerebellar ataxia may be a prominent feature in autoimmune encephalitis and paraneoplastic syndromes.

Cerebellar ataxia may be a prominent feature in autoimmune encephalitis (AIE) and also in neurologic syndromes associated with antibodies against synaptic antigens or intraneuronal antigens (onconeural antibodies). The presentation may be pure ataxia or ataxia with additional symptoms (eg, encephalitis, seizures, and myoclonus). The clinical course may be acute, subacute, or progressive.

AIE are caused by antibodies to cell-surface antigens (antiCSA) involved in neurotransmission and cause neuronal dysfunction by blocking ion channels, disrupting interactions with neighboring molecules, altering receptor membrane localization, or causing receptor internalization.2 Multiple forms of glutamate and γ-aminobutyric acid receptors (GABAR) in Purkinje cells are critical for cerebellar function, as are the unique features of the Na+ and K+ channels underlying the exact spike firing during timing controls and the Ca2+ signaling system. Immune-mediated dysfunction of any of these critical components can result in the development of ataxia.3

Ataxia may be a prominent clinical feature in AIE because the cerebellum and hippocampus are brain regions preferentially targeted by autoimmunity.4 Most people with ataxia and AIE present with additional symptoms (eg, episodic memory impairment, abnormal movements, seizures and dysautonomia). The clinical course is usually acute or subacute gait ataxia; nonetheless, limb ataxia and chronic course may also occur.1

Cerebellar ataxia may occur in anti-N-methyl-d-aspartate receptor (antiNMDAR) encephalitis, anticontactin-associated protein-like 2 (antiCASPR-2)-associated disease, antiglutamic acid decarboxylase (antiGAD) associated neurologic syndromes, and antiGABAAR and antiGABABRencephalitis, which are covered elsewhere in this issue. The Table describes the frequency of cerebellar manifestations in AIE and where pure cerebellar manifestation may be found. 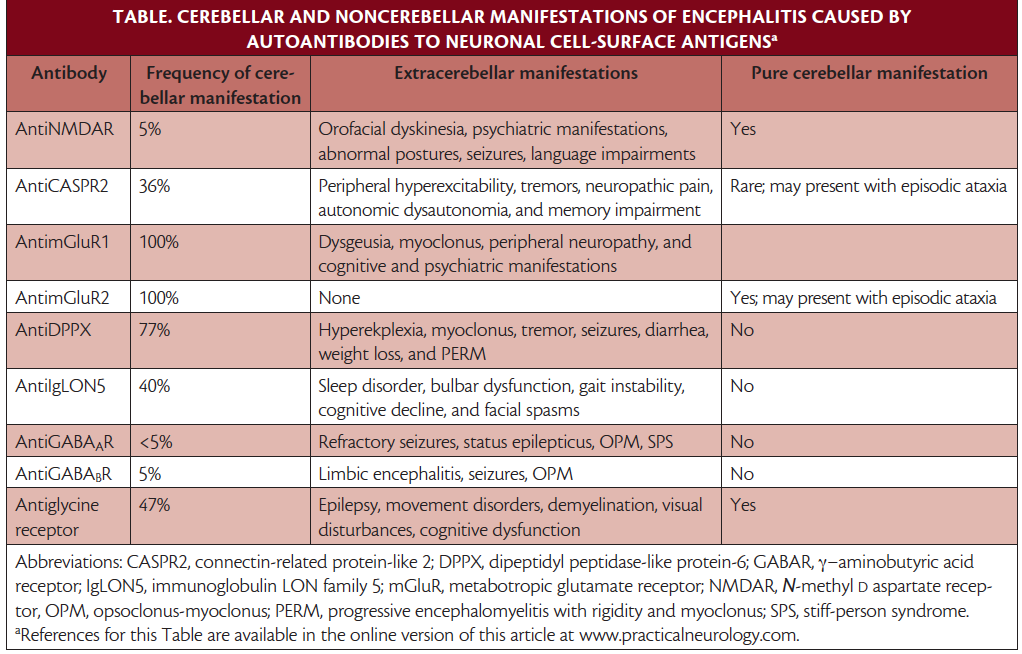 The metabotropic glutamate receptor 1 (mGluR1) is a G-protein–coupled receptor involved in long-term depression of parallel fiber–Purkinje cell synapses, which is critical for motor learning.5 AntimGluR1-associated encephalitis is rare, and manifestations include isolated subacute ataxia or ataxia with variable manifestations (eg, dysgeusia, myoclonus, peripheral neuropathy, and cognitive and psychiatric complaints.6 Brain MRI may be normal or show mild vermis atrophy (Figure) or even T2 fluid-attenuated inversion recovery (FLAIR) hyperintensities in the cerebellum. AntimGluR1-associated disease may be paraneoplastic, mostly associated with lymphoproliferative malignancies. The clinical course is severe, and sequelae are frequent.

Antimetabotropic glutamate receptor 2 (mGluR2)-associated encephalitis was recently described in association with cancer.7 AntimGluR2 bind to the hippocampus and cerebellar granular cell layer with robust immunoreactivity of axons and dendrites from cells immediately below the Purkinje layer extending into the molecular layer.8 Episodes of ataxia, followed after a couple of years by permanent ataxia without other clinical manifestations have been described in 1 case.8

Anti-immunoglobulin-LON 5 (antiIgLON5)-associated disease has been characterized as a progressive disorder of insidious onset with 4 clinical syndromes: 1) a prominent sleep disorder (36.4%), 2) a bulbar syndrome (27.3%), 3) a progressive supranuclear palsy (PSP)-like presentation with gait instability and supranuclear gaze palsies, and 4) cognitive decline (13.1%). Gait instability associated with ataxia has been seen in small case series.9,10

Cerebellar ataxia has been part of the presentation of AntiGlyR-associated disease; in a series of 17 cases, 47% of individuals had notable cerebellar and parkinsonian signs on examination.12 (See Trending Autoantibodies in Autoimmune Movement Disorders in this issue).

Paraneoplastic cerebellar degeneration (PCD) is seen in approximately 24% of paraneoplastic neurologic syndromes, typically affecting women more than men.13 There is usually an acute or subacute onset, with vertigo, dizziness, vomiting, and nausea, which evolves rapidly (weeks to months) to gait ataxia, truncal and limb ataxia, dysarthria, and nystagmus. Other signs and symptoms may be present, including dysphagia, brisk reflexes, hearing loss, extrapyramidal signs, peripheral neuropathy, and cognitive impairment.14 Usually, severe disability occurs early in the disease course, generally within 12 weeks when PCD reaches its peak and then stabilizes.15-17

The clinical spectrum of antiHu paraneoplastic syndrome includes a sensory-predominant neuronopathy causing progressive loss of sensation and severe sensory ataxia owing to the lack of proprioceptive information. A clinical syndrome with encephalomyelitis, limbic encephalitis, and peripheral sensory neuropathy is associated with small cell lung cancer (SCLC) and Hu-antibodies.21 Isolated ataxia is uncommon. At high titer, antiHu conveys an approximately 87% risk of SCLC and other tumors.22

Cerebellar ataxias associated with antiTr/DNER include subacute and severe cerebellar ataxia, encephalopathy, and sensory neuropathy.23-25 Men are predominantly affected with a sex ratio of 3:1. AntiTr/DNER antibodies are almost exclusively found in patients with Hodgkin disease (89% of patients). Brain MRI is normal at onset, but cerebellar atrophy is frequent in later stages. Cerebrospinal fluid (CSF) analysis reveals pleocytosis in 60% of patients.23-25

Ataxia is frequent in individuals with antiCV2. Ocular syndromes are also especially frequent, including retinopathy, uveitis, and optic neuritis. Most affected individuals are men, and the most frequently associated tumor is SCLC. Malignant thymoma and uterine sarcoma were also reported in few cases.26

Most people with antiRi antibodies have a multisystem neurologic involvement with the cerebellum and brainstem most commonly affected. The typical progression is a cerebellar syndrome presenting with subacute gait ataxia followed in a second stage by signs and symptoms of brainstem involvement. Subsequently, there is involvement of the pyramidal system and basal ganglia. AntRi-associated disease occurs predominantly in women and is most commonly associated with breast cancer.27 Opsoclonus or other eye movement disorders might be seen in people with antiRi and ovarian cancer, breast cancer, or SCLC. Some may also develop laryngeal spasms.28

AntiSOX1 are antiglial nuclear antibodies associated with LEMS, limbic encephalitis, polyneuropathy, and PCD. These are strongly paraneoplastic and usually associated with SCLC, breast or thyroid cancer, Hodgkin lymphoma, and nonSCLC.34,35

Brain MRI is important to exclude neoplasms and other etiologies. Initial imaging may be normal, but atrophy may present later and is usually more prominent in the vermis. MRI spectroscopy of the vermis (measuring N-acetyl aspartate [NAA]to creatine [Cr] ratio) can be a very sensitive test of cerebellar dysfunction and a useful monitoring tool, particularly when considering immunosuppression.1

Testing for antineuronal antibodies should be done on both serum and CSF; for antiCSA, we use 2 different techniques: tissue-based assay (TBA) on rodent brain tissue with indirect immunohistochemistry or indirect immunofluorescence followed by cell-based assay (CBA). For onconeural antibodies we usually investigate with TBA followed by immunoblot.2,36,37 Most commercial kits offer paraneoplastic panels and autoimmune panels, and some specific antibodies should be ordered separately (eg, antimGluR1). Prognosis and presence of antineuronal antibodies are associated because CSA antibodies indicate likelihood of a better response to treatment and can also indicate an underlying neoplasm, depending on the results.2 Antibody testing is, however, negative in almost 40% of cases of PCD.38

Tumor investigation with whole body-CT should be performed in all suspected cases of immune-mediated cerebellar ataxia. If CT findings are negative, fluorodeoxyglucose positron emission tomography (FDG-PET) is indicated because it increases cancer detection by 20%.39 Mammograms followed by MRI are used for breast cancer screening. For the pelvic region and testes, ultrasound is the investigation of first choice followed by pelvic CT. It is important to note that ovarian teratomas are not seen in FDG-PET scans.2

Previous studies have shown an association between delayed treatment initiation and poor outcomes in autoimmune neurologic disorders. It is reasonable to initiate immunotherapy and tumor removal, if needed, as soon as an unambiguous diagnosis has been made.37,38

Most antiCSA-associated cerebellar ataxias respond to immunotherapy, although powerful immunosuppression for weeks or months may be needed in some cases. First-line therapies include intravenous (IV) methylprednisolone 1 g for 3 to 5 days and IV immunoglobulin (IVIG, 0.4 g/kg/day for 5 days) or plasmapheresis. We favor plasmapheresis in those with refractory seizures and severe dysautonomia, although there is no compelling evidence of superiority for any approach. If serious impairments remain after 10 to 14 days, we give rituximab (often 375 mg/m2 weekly for 4 weeks) or cyclophosphamide (750 mg/m2 IV monthly until improvement is noted), or both.39,40 Second-line treatments should be started within 2 to 3 weeks or sooner in those who are very ill.41

Treatment of paraneoplastic neurologic syndromes begins with therapies addressing the underlying malignancy. Depending on the cancer type, surgery, radiotherapy, or chemotherapies should be first considered in order to prevent metastasis and remove antigens that trigger immune-mediated processes.42

Treatment response in paraneoplastic cerebellar degeneration is low, response to immunotherapy is often disappointing, and the efficacy of immunosuppression for onconeural antibodies is not supported by higher-level evidence.43,44 Usually, steroids, plasmapheresis, IVIG or immunoadsorption are used. Plasmapheresis has not been shown effective, especially in syndromes not associated with antiCSA; nevertheless, it is sometimes used. In refractory cases we use cyclophosphamide and other immunosuppressants (eg, azathioprine, methotrexate, cyclosporin A, tacrolimus, or mycophenolate mofetil) as steroid-sparing agents.22,45,46

Cerebellar ataxia may be a clinical manifestation of AIE and is also associated with antibodies against synaptic and paraneoplastic antibodies. Clinical examination is of paramount importance, as other neurologic manifestations such as seizures, myoclonus, orofacial dyskinesia, abnormal ocular movements, and peripheral involvement may provide clues to the diagnosis. Patients with suspected immune-mediated cerebellar ataxia should be screened for antineuronal antibodies, including autoimmune and paraneoplastic panels. Testing might help in defining treatment and prognosis as well as underlying malignancy.