Mr. G, age 28 and previously healthy, presented to the emergency department with profound bilateral sensorineural hearing loss that began 1 week earlier. At presentation, he communicated by writing and explained he could not hear anything. His neurologic examination was notable for complete lack of auditory perception and Parinaud syndrome with upgaze palsy and convergence-retraction nystagmus. Mr. G’s otoscopic examination revealed no abnormalities in the external auditory canal or of the tympanic membrane.

Brain MRI (Figure 1) showed a mass in the pineal region measuring approximately 4 cm at the greatest dimension and causing marked compression on the dorsal midbrain and cerebral aqueduct resulting in obstructive hydrocephalus. 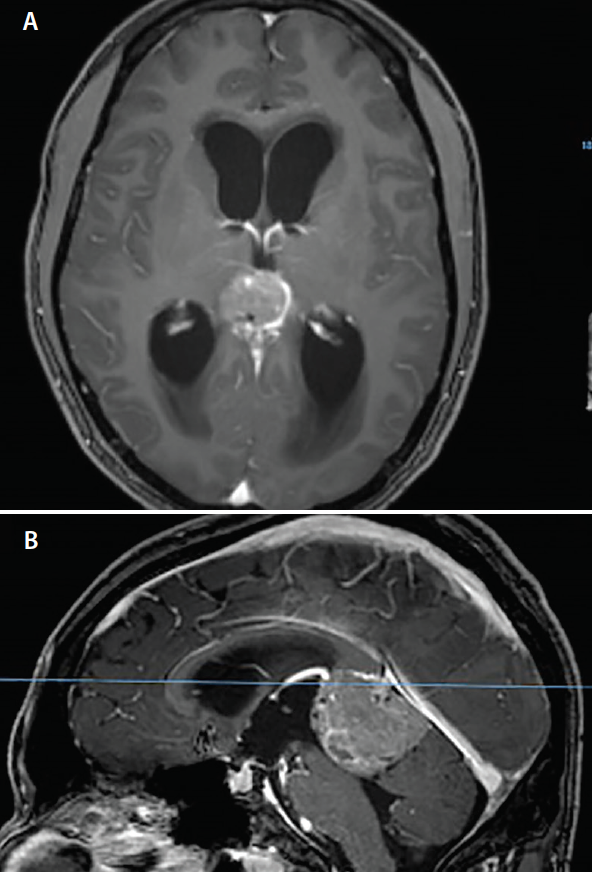 Mr. G had a right frontal burr hole placed and endoscopic third ventriculostomy (ETV) and minimally invasive biopsy of the pineal mass. After surgery, he had immediate improvement in hearing and 1 month later had complete resolution of auditory deficits. The biopsy revealed germinoma, and Mr. G was successfully treated with chemoradiation.

The relationship between hydrocephalus and SNHL remains a subject of active research. The hydrodynamic theory of hearing dysfunction posits that changes in CSF pressure can be transmitted directly to the perilymph via the cochlear aqueduct and indirectly to the endolymph via the endolymphatic sac.1 Changes in ICP could lead to relative endolymphatic or perilymphatic hydrops, resulting in hearing loss (Figure 2). This theory is supported by reports of hydrocephalus-associated SNHL as a complication of overshunting6-8 and as a symptom that resolved after shunt placement.2,3 It is possible that in Mr. G, increased ICP caused perilymphatic hydrops that was resolved after ETV normalized ICP. 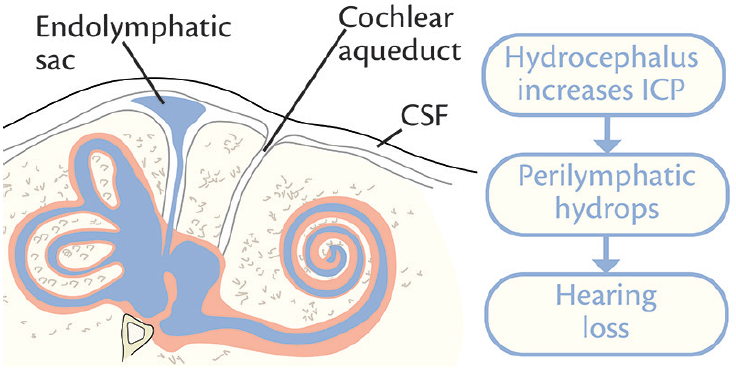 A previous report described a case of SNHL associated with hydrocephalus in which ETV was performed and improved a number of symptoms, but not SNHL.9 The difference in outcome in that case vs Mr. G’s hearing loss may be related to the duration of hearing loss. Whereas Mr. G was treated soon after acute hearing loss onset, the individual in the other published case had SNHL for more than 2 decades before ETV. There is evidence that early treatment of hydrocephalus, as in Mr. G’s case, can lead to greater recovery of audiologic functioning.3 Although Mr. G did not have formal audiometric testing because the findings of a mass requiring urgent intervention, profound and immediate improvement in hearing based on clinical examination was documented after treatment.

Aside from hydrocephalus, it is also possible that dorsal midbrain compression played a role in Mr. G’s hearing loss. In particular, compression of the inferior colliculus can be associated with hearing disturbance.10-14 The immediate postoperative return of audiologic function suggests that hydrocephalus may have played a dominant role in Mr. G’s hearing loss. The resolution of dorsal midbrain mass effect after chemoradiation may also, in part, have facilitated the full return of hearing function that was seen at the time of last follow-up.