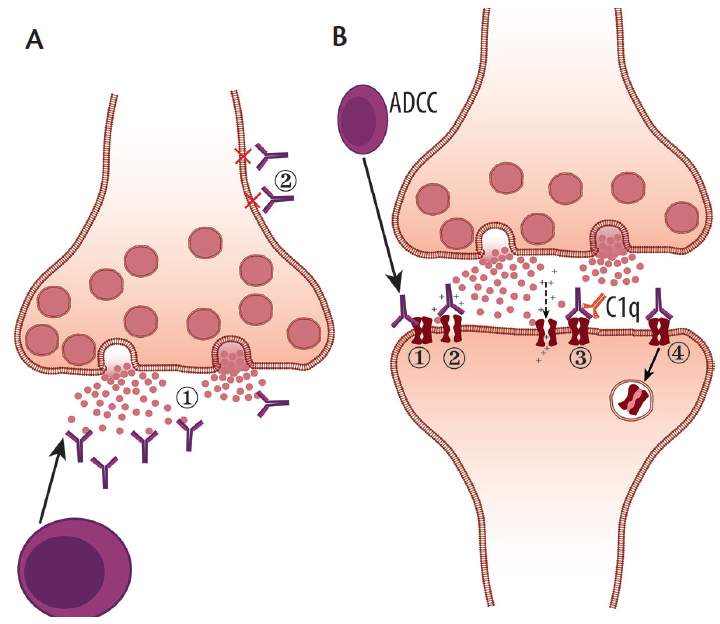 Figure 1. Pathophysiology of antibody mediated autoimmune diseases. A depicts intracellular-directed antibodies, which are most likely T-cell mediated (1) or may reach their targets when vesicles fuse and synaptic contents are then released. Intracellular antibodies generally are unable to reach their intracellular targets (2). However, neuronal surface antibodies (B) are pathogenic in a variety of mechanisms: 1) through antibody-dependent cellular cytotoxicity (ADCC); 2) directly binding to receptors and interfering with function; 3) antibody binding then triggers the complement cascade (C1q); or 4) antibody binding results in receptor internalization, which in turn interferes with function.

Movement disorders are most often caused by dysfunction of motor circuits involving the basal ganglia and cerebellum (Figure 2).3 The basal ganglia are a group of interconnected subcortical nuclei. Different areas of the basal ganglia receive afferent inputs or send efferent signals. The striatum (caudate and putamen) is the main input center, receiving afferents from the cortex, brainstem, and thalamus as well as the substantia nigra pars compacta (SNc), a part of the basal ganglia. The subthalamic nucleus (STN) also receives cortical input. Efferents in the striatum and STN send cortical input to the globus pallidus interna (GPi) and substantia nigra pars reticularis (SNr), which project efferently to the thalamus and brainstem and back to the cortex in the cortico-striato-thalamic loop. Communication within the basal ganglia occurs via direct and indirect pathways that exert opposing effects. The direct pathway is monosynaptic and provides GABAergic input from the striatum to the output nuclei (GPi and SNr). The indirect pathway is polysynaptic and sends input from the striatum to the GPi/SNr via the globus pallidus pars externa (GPe) or via the GPe through the STN.3 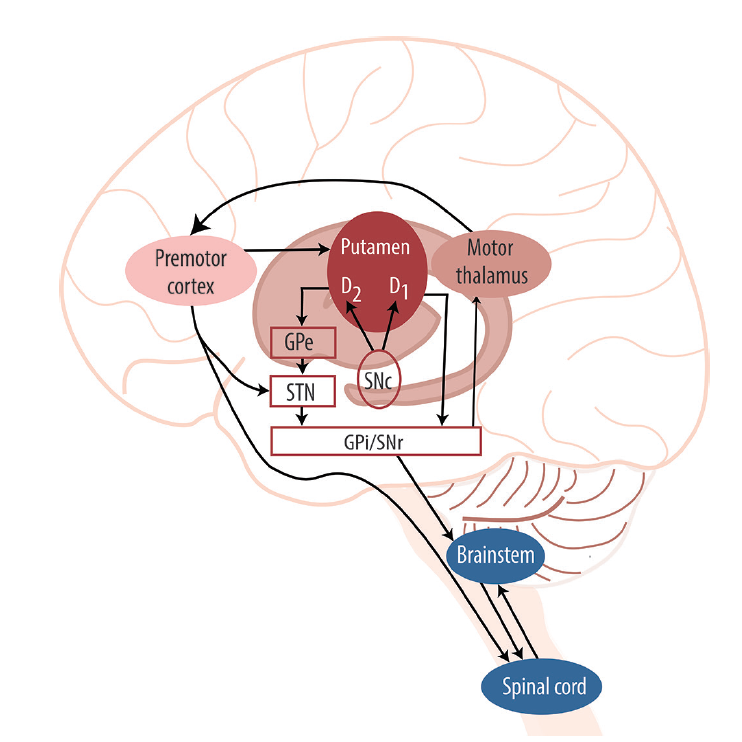 The cerebellum acts to control movement via the dentato-rubro-olivary loop and the cortico-cerebellar circuit.2 In general, the cerebellum exerts tonic excitatory input to the cortex. Cerebellar dysfunction mostly is manifested as ataxia, although intention tremor and dystonia (rare) can also occur.

The clinical evaluation includes a detailed history, physical examination, and ancillary testing. A detailed history is critical, including collateral information from school teachers and other caregivers because sometimes symptom onset, especially when gradually progressive or situationally dependent, occurred when the child was away from their primary caregivers. Factors that provoke or lessen symptoms and family history are important to ascertain. Physical and neurologic examination provide additional information, including determining the type of movement disorder present.

Tics or dystonia alone are less likely to be autoimmune; prevalence of tics in children is common and often comorbid with obsessive-compulsive disorder (OCD) or attention-deficit/hyperactivity disorder (ADHD).4 Dystonia can have multiple etiologies including cerebral palsy or genetic diseases.5 If a new-onset movement disorder (within the past 3 months) is accompanied by other neurologic symptoms (eg, new-onset seizures, cognitive decline with prior normal development, speech changes, autonomic instability, or psychiatric symptoms), autoimmune causes should be considered. If there is a history of developmental delay or regression with illness, however, other diagnoses including genetic and metabolic disorders (eg, mitochondrial and inborn errors of metabolism) should be considered. Autoimmune causes are reported in up to 42% of children with acute movement disorders.6 A negative family history does not remove the possibility of a genetic or metabolic disorder, because de novo mutations or autosomal recessive diseases can also cause movement disorders.

Suggested ancillary testing is outlined in Table 1. Positive findings supportive of a diagnosis of autoimmune movement disorders can include cerebrospinal fluid (CSF) pleocytosis, elevated IgG index, or positive oligoclonal bands along with MRI evidence of inflammation. Antibody testing is also helpful, but interpretation of positive results should be made cautiously depending on the antibody. Imaging features are variable and range from normal to T2 lesions and enhancement (Table 2). 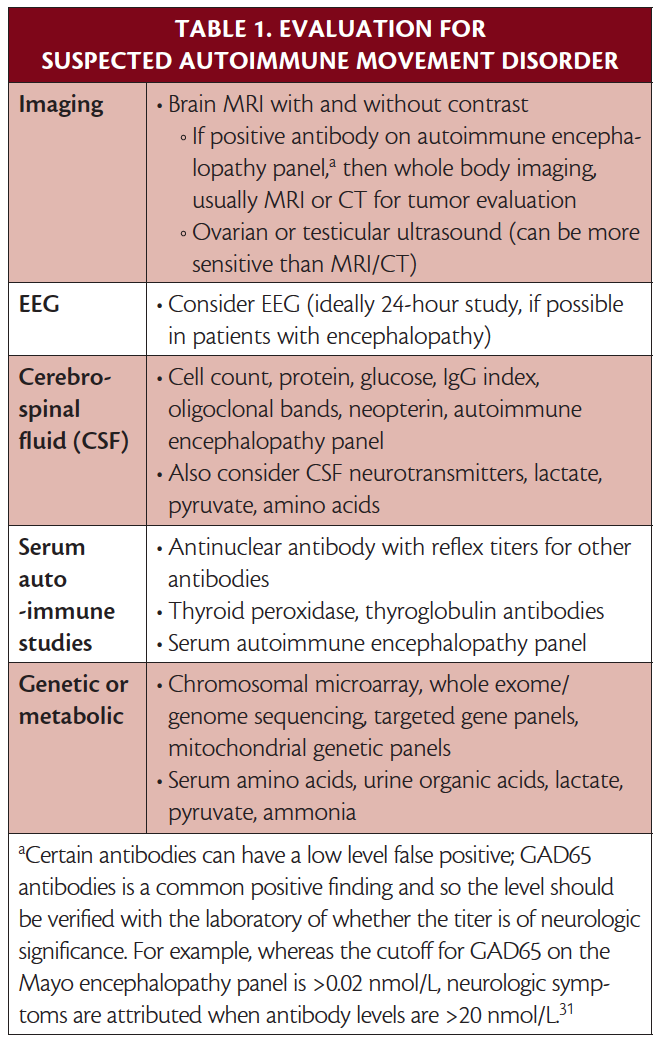 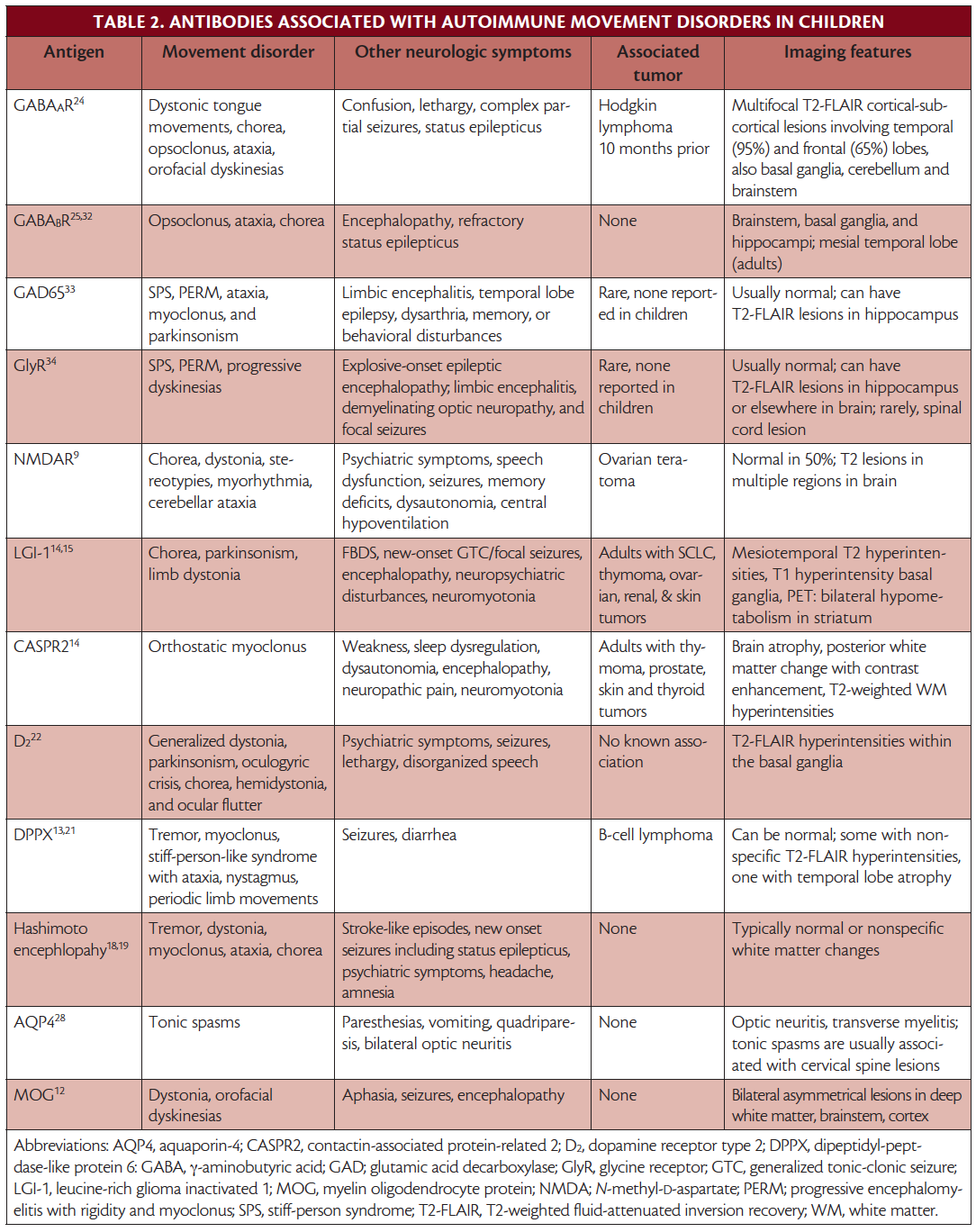 Treatment includes disease-modifying immunotherapy and symptomatic treatment. Steroids and intravenous immunoglobulin (IVIG) are first-line immunotherapy and plasmapheresis is also considered, especially in severe or refractory cases. Determining whether any identified antibody has an extracellular vs intracellular target can guide the choice of second-line agents, which include rituximab, cyclophosphamide, or mycophenolate mofetil.7 Neuropsychologic testing can also identify underlying cognitive issues. Treatment duration varies and generally our practice has been to give 2 years of immunotherapy for children who recover. Relapses can occur and some individuals may require longer treatment immunotherapy or have a poor response to immunotherapy, especially when the identified antibodies have intracellular targets.

Children can also develop autoantibodies to voltage-gated potassium channel-associated proteins, including leucine-rich glioma inactivated 1 (LGI-1) and contactin-associated protein-related 2 (Caspr2), which both cause movement disorders.13 Clinical syndromes primarily include encephalitis, new-onset seizures, and neuropsychiatric symptoms but also a peripheral component (eg, Morvan syndrome, which is more common with antiCaspr2). Autonomic symptoms, including hypertension, sweating, and weight loss can also occur. Chorea, parkinsonism, myoclonus, and limb dystonia occur in both but are more common with antiLGI-1.14 Neuromuscular symptoms are common with both antiLGI-1 and antiCaspr-2 and can include neuromyotonia, cramps, and generalized weakness. Multiple seizure types have been identified including faciobrachial dystonic seizures (FBDS), focal tonic or clonic seizures, and generalized tonic-clonic seizures. Primarily seen in LGI-1, FBDS can be easily mistaken for a movement disorder and is poorly responsive to antiseizure medications (ASMs) but improves with immunosuppressants. Serum testing for antiLGI-1 and antiCaspr2 is highly sensitive but greater sensitivity is reached by testing both serum and CSF.15 Tumors have not been reported with antiLGI-1 and antiCaspr2 in children, although antibody-negative limbic encephalitis has been associated with Hodgkin lymphoma.16 Imaging findings can be highly variable and nonspecific (Table 2).

Hashimoto encephalopathy (HE), also known as steroid-responsive encephalopathy associated with autoimmune thyroiditis, is characterized by neurologic and psychiatric symptoms with increased levels of antithyroid antibodies (eg, antithyroid peroxidase [antiTPO] or antithyroid globulin).17 In 10% of people with antiTPO antibodies, however, there are no neurologic symptoms; other autoimmune causes should thus also be considered.13 Children with HE can experience cognitive and language decline, seizures including new-onset refractory status epilepticus,18 insomnia, and psychiatric symptoms (eg, depression, psychosis, anxiety, hallucinations and mania).18 Movement disorders include tremors, dystonia, ataxia, and hyperkinetic behaviors, including tics and myoclonus.19 Nonspecific abnormalities may be seen on MRI but are more typically normal. Findings on EEG are typically abnormal.19 Although a majority of cases have been steroid responsive, 25% require additional immunotherapy including IVIG, rituximab, and mycophenolate mofetil.20

The presentation of antidipeptidyl-peptidase-like protein 6 (DPPX) antibody-associated encephalitis includes tremor, myoclonus, ataxia, cerebellar ocular movement abnormalities, periodic limb movements of sleep, and seizures.13 Stiff-person syndrome (SPS) and progressive encephalomyelitis with rigidity and myoclonus (PERM) can occur with antiDPPX-associated disease and antibodies to DPPX have been associated with B-cell lymphoma.21 Diagnosis can be difficult because there is insidious onset, and symptoms can be preceded by diarrhea or unintentional weight loss. No abnormal imaging findings have been reported in children with DPPX-antibody–associated encephalitis.13

Antibodies to D2 are seen in basal ganglia encephalitis and less commonly in Sydenham chorea and Tourette syndrome.2 AntiD2 can result in hypokinetic and hyperkinetic movement disorders.13 Individuals with antiD2-associated movement disorders most commonly had generalized dystonia and parkinsonism (ie, bradykinesia and akinesia). Chorea, tremor, and oculogyric crisis were also seen. Other symptoms included lethargy, sleep disturbances, seizures, and psychiatric symptoms. Hyperintense T2 MRI lesions were seen in the basal ganglia in 50% of cases, and EEG findings were either normal or demonstrated encephalopathy. Most cases had a monophasic course with accelerated recovery after intravenous steroids and IVIG, but nearly half of individuals were left with motor abnormalities, cognitive impairments, and psychiatric diagnoses.22,23

Both SPS and PERM have been associated with antibodies to glutamic acid decarboxylase (GAD) and glycine receptors (GlyR).13 AntiGlyR antibodies are also associated with explosive-onset epileptic encephalopathy (without rigidity and myoclonus), limbic encephalitis, demyelinating optic neuropathies and focal seizures with progressive dyskinesia.13 AntiGAD antibodies are also associated with ataxia, myoclonus, and parkinsonism.2 Brain MRI and CSF studies are usually normal. Diazepam or baclofen is used for symptomatic treatment along with immunotherapy (see Stiff-Person Syndrome in this issue).13

Disease associated with antibodies to γ-aminobutyric acid type A receptor (GABAAR) usually has a presentation with seizures and multifocal cortical and subcortical T2 lesions on MRI.24 Children are more likely to develop a movement disorder with antiGABAAR-associated disease than adults. Of 11 children with known cases, 7 developed orofacial dyskinesias, dystonic postures, or generalized choreoathetosis. AntiGABAAR antibodies are also, rarely, associated with SPS.13 AntiGABABR encephalitis is rare in children; a single case has been reported in a boy age 3, who presented with encephalopathy, seizures, and a mixed movement disorder including opsoclonus, ataxia, and chorea.25

Movement disorders can occur in demyelinating diseases (eg, multiple sclerosis [MS] and neuromyelitis optica spectrum disorders [NMOSD]). Although it is rare, paroxysmal ataxia-dysarthria can occur in MS,26 including children in the authors’ experience. Brief recurrent stereotyped tonic spasms without loss of awareness occur, are often painful, can involve 1 or more limbs, and are triggered by sudden movement or stress. Tonic spasms can also occur in pediatric MS27 and, in the authors’ experience, in NMOSD.28 Oxcarbazepine is most effective for symptomatic management.

OMAS. Associated with antiglutamate dehydrogenase type 2 (GluD2), opsoclonus myoclonus ataxia syndrome (OMAS) is a syndrome characterized by opsoclonus, nonepileptic myoclonus, ataxia, behavioral and sleep disturbances, and, sometimes, cognitive decline.13 Neuroblastoma is detected in 50% of cases; OMAS occurs in 3% of children with neuroblastoma.13 Brain MRI in the acute phase is generally normal. Antibodies to surface-expressed GluD2 and antiHu have been associated with OMAS.13,29 In 75% of cases there is a chronic relapsing course and permanent neurologic sequelae, including cognitive and behavioral disorders.13

Poststreptococcal Movement Disorders. The most common cause for acute isolated chorea in children is Sydenham chorea (SC), which is poststreptococcal and considered immune-mediated, although no specific antibodies have been identified. Psychiatric symptoms can occur along with motor impersistence (eg, milkmaid sign, tongue darting, and pronator signs) and dysarthria.2

SLE- and APS-Associated Movement Disorders. Systemic lupus erythematosus (SLE) and antiphospholipid syndrome (APS) are complex autoimmune disorders that may present with several neurologic manifestations, including movement disorders.9 Chorea is the most common movement disorder in SLE and also occurs more commonly in people diagnosed with APL in childhood (before age 15 years).9 Parkinsonism is well described in SLE and dystonia is occasionally described in both conditions.13 Up to 92% of people with SLE-associated chorea are seropositive for antiphospholipid (aPL) antibodies.13 Other movement disorders in APL include hemidystonia, ataxia, and tics.9 Improvement has been reported with haloperidol, tetrabenazine, valproic acid, clonidine, corticosteroids, aspirin, and D2 antagonists (See Movement Disorders in Antiphospholipid Syndrome and Systemic Lupus Erythematosus in this issue). Plasmapheresis or IVIg has been used for refractory cases9; long-term immunosuppression with mycophenolate, cyclophosphamide, and rituximab has been used.6

Although it is difficult to make a diagnosis of an autoimmune disorder as the cause of neurologic symptoms without a positive laboratory test (Table 3), this is not unique to autoimmune disorders. For example, a negative finding on genetic testing does not rule out a genetic etiology because clinical genomic sequencing (genome or exome sequencing) has an average 33% yield even in targeted populations with presumed genetic etiologies. Yield of exome sequencing is 34.4% in dystonia, with a higher yield in complex dystonia or intellectual disabilities.5 Consideration of an antibody-negative autoimmune movement disorder follows guidelines of antibody-negative autoimmune encephalitis, which includes clinical and paraclinical evidence of neuroinflammation (ie, CSF pleocytosis or CSF-specific oligoclonal bands and MRI features of encephalitis).17,30 The majority of PANDAS/PANS patients would not meet the proposed criteria for pediatric autoimmune encephalitis. 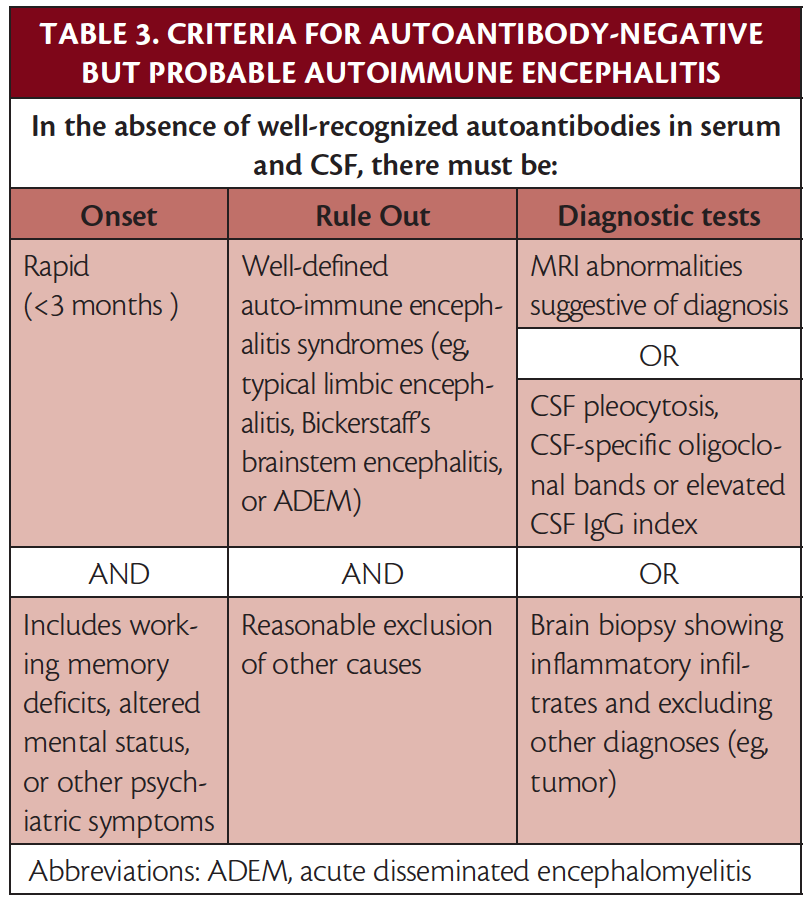