The immune-mediated encephalitis associated with antibodies against the N-methyl-d-aspartate receptor (NMDAR) causes neurologic and psychiatric symptoms, including memory deficits, seizures, frequent dyskinesia, autonomic dysfunction, decreased consciousness and hypoventilation.1 The estimated incidence is 1.5 per million per year, and the California Encephalitis Project study showed that antiNMDAR encephalitis is more common than viral encephalitis.2,3 Occurrence in childhood is more frequent (median age 21 years) and girls and women are affected more often than men (8:2 female:male).3 The presence of antiNMDAR antibody is pathognomonic and causes a constellation of symptoms according to the stage of disease.2,4 A movement disorder with unique features is one of the common manifestations of antiNMDAR encephalitis and can raise suspicion for this readily treatable disease.

The NMDAR is a major mediator of excitotoxic neurotransmission by glutamate and glycine and plays a crucial role in synaptic transmission, dendritic sprouting, gene regulation, and synaptic remodeling. Misregulation of these receptors by glutamate, however, leads to apoptotic (cell death) signaling. Such excitotoxic damage by glutamate at the NMDAR is implicated in neurodegenerative diseases (eg, Parkinson disease, Huntington disease, epilepsy, and dementia).5

AntiNMDAR antibodies target the NR2B heteromers on the extracellular regions of NMDAR, expressed in the hippocampus and forebrain.1 The antiNMDAR antibodies are thought to play a pathogenic role because titers decrease as neurologic symptoms improve. There is also a decrease NMDAR levels found in cultured cerebrospinal fluid (CSF) samples containing NMDAR antibody.4 Intoxication by drugs with antagonistic action to NMDAR (eg, phencyclidine and ketamine) resembles the neuropsychiatric symptoms of antiNMDAR encephalitis.6

In a prospective study of 51 participants with HSE, 27% developed autoimmune encephalitis, usually within 2 months of treatment for HSE. AntiNMDAR antibodies were the most commonly identified antibody (64% of cases).9 A systematic review of HSE-associated antiNMDAR encephalitis cases found the latency between HSE and antiNMDAR encephalitis is significantly lower in children vs adults (24 days vs 40.5 days).13

A group of symptoms develop and progress according to stages of disease in antiNMDAR encephalitis. Initially, there is a prodromal illness followed by psychiatric manifestations and prominent neurologic manifestations, including movement disorders, seizures, autonomic dysfunction, and impaired consciousness. Next, there is a long recovery stage (Figure) with persistent neurologic symptoms.2 Adults and children have different symptomatology; an observational study of 577 people with antiNMDAR encephalitis showed 65% of adults presented with behavior problems, whereas 50% of children under age 12 years presented with seizures or a movement disorder. Within the first 4 weeks of presentation, symptoms were similar across all ages, although movement disorders were still more common in children under age 12 years, and memory deficits and hypoventilation occurred more often in adults.10 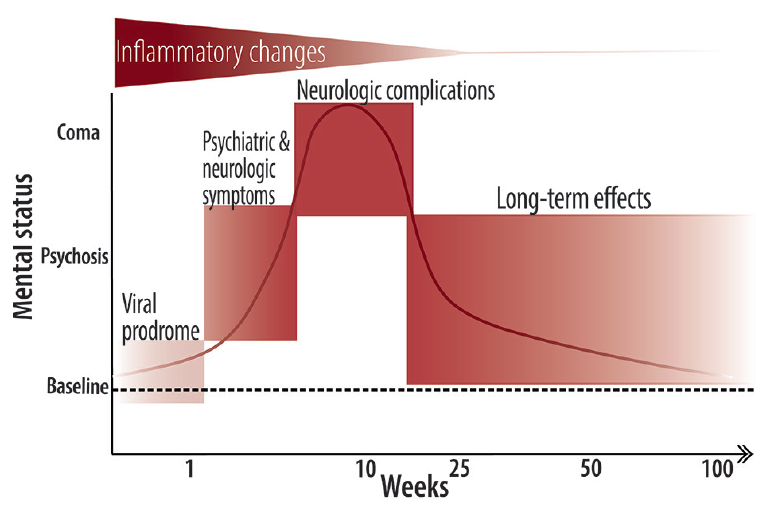 There is evidence that the duration and type of movement disorder associated with antiNMDAR encephalitis differs with age. In a retrospective analysis study of 28 individuals with antiNMDAR encephalitis, hyperkinetic movements (eg, choreoathetosis) were more common in children under age 10 years vs those age 10 years or more (14%). In contrast, hypokinetic movements (eg, catatonia and bradykinesia) were more common in those over age 10 years, whereas no person in this study under age 10 years had bradykinesia or ballismus. Although orofacial-lingual dyskinesia was equally present at all ages, it tended to last longer in those over age 10 years. Differences in type of movement disorder may relate to age-dependent differences in receptor distribution or sensitivity, dysfunction of different parts of the basal ganglia, or dopamine receptors.16

Stereotypies are often common in young children and range simple movements (eg, cycling of leg, thrashing movement of limb, repetitive flexion-extension of trunk, or head nodding) or complex (eg, raising and lowering of the arm, finger wiggling, learned movements of playing piano or harp, dance figures, or rolling-pills).17 Perseveration of a motor task (eg, moving hair behind the ear or scratching the nose) has been observed. Stereotypies may be difficult to differentiate from psychiatric symptoms or seizures, and prolonged clinical observation and videoEEG may help in defining symptoms clearly and guiding treatment appropriately.17

Oligosymptomatic presentation is a rare phenotype of antiNMDAR encephalitis, seen in 1% of cases and characterized by the presence of only 1 neurologic symptom, rather than the typical multiple neurologic and psychiatric symptoms. Because antiNMDAR can present with predominant movement disorder symptoms without major psychiatric or epileptic manifestations, antiNMDAR antibody testing should be considered in a new-onset, unexplained movement disorder in an appropriate clinical setting.18

Psychiatric symptoms are seen more commonly in adults than children (90% vs 42%).13 Although no specific psychiatric symptoms of antiNMDAR encephalitis have been identified, a cohort study of 111 cases showed psychiatric symptoms were present in 59% and approximately 40% had been admitted to a psychiatric institution. The most common psychiatric manifestation in this cohort was visual and auditory hallucinations (40%) followed by depression (23%), acute schizoaffective episode (23%), mania (8%), and eating disorder or addiction (6%). Antipsychotic intolerance occurred in 47% of these individuals, requiring admission to ICU due to rhabdomyolysis, high temperature, muscle rigidity, mutism, and coma—some of which are also seen with antiNMDAR encephalitis disease itself.20 In a meta-analysis that included 544 cases, agitation (59%) and psychosis (54%) were the most common psychiatric manifestations. Agitation was commonly seen in children, whereas psychosis was more common in adults.21

The clinical presentation and finding of antiNMDAR antibodies in serum or CSF is highly suggestive of the diagnosis. Further aids to diagnosis include brain MRI, CSF analysis, and EEG. In a large cohort of individuals with antiNMDAR encephalitis abnormal findings on EEG, CSF, or MRI were present in 90%, 79%, and 33% of cases respectively.10 In another series of 100 cases, 95 individuals had abnormal CSF findings, including lymphocytic pleocytosis, elevated protein concentration, and oligoclonal bands. Findings on EEG were abnormal and included generalized or frontotemporal slow activity and epileptic activity in 92 of the 92 persons who had EEG. Brain MRI in 55 cases using fluid-attenuated inversion recovery (FLAIR) sequence showed increased signal in various locations, including the medial temporal lobe, cerebral cortex, cerebellum, brainstem, and basal ganglia along with contrast enhancement in the cortex, meninges, and basal ganglia. Tumor screening showed the presence of teratoma in 58 of 98 individuals, 56 of whom were women. It is important to test CSF for antiNMDAR because the CSF antibody assay is more sensitive than serum.22

In 2016, a group of experts proposed diagnostic criteria for antiNMDAR encephalitis, which includes a constellation of clinical, MRI, laboratory, and CSF findings along with tumor screening (Table).23 The proposed criteria have high sensitivity (90%) and specificity (96%) and provide a tool for early diagnosis of antiNMDAR encephalitis within 2 weeks of first symptom onset.24 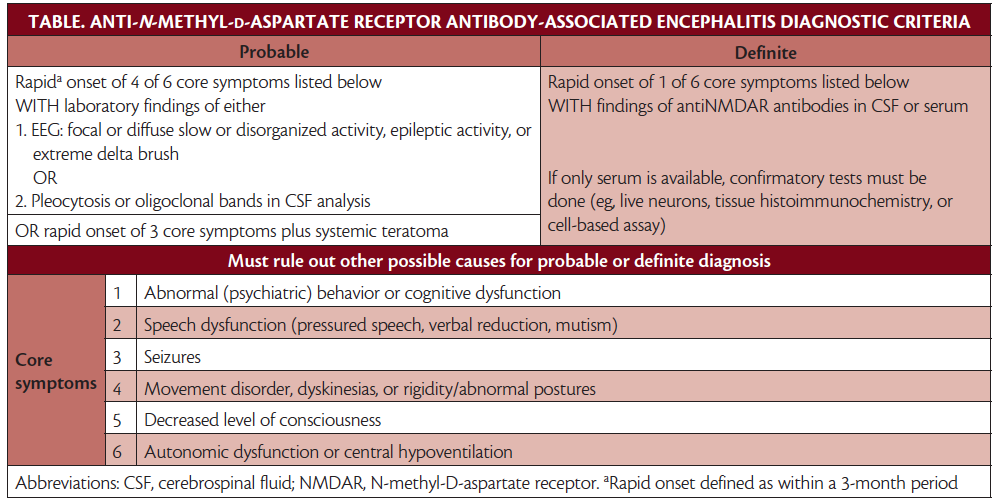 Immunotherapy and tumor removal (if applicable) are the mainstay of treatment. In a large cohort of 577 people with antiNMDAR encephalitis, 81% had good neurologic outcome at 24 months with first-line immunotherapy (ie, steroids, intravenous immunoglobulin [IVIG], or plasma exchange) and tumor removal if present. The risk of relapse is low (12% in this study) and most relapses were less severe than the initial presentation and often monosymptomatic. Risk of relapse is lower with the initiation of first- line immunotherapy during the acute phase of disease and further reduced by second-line immunotherapy (ie, rituximab, cyclophosphamide, or a combination of both) when used during a relapse. The factors associated with good outcome include not being admitted to the ICU, early treatment initiation, and low severity of disease in first 4 weeks of presentation.10 Abnormal movements typically respond well to immunotherapy, but tetrabenazine can be considered for uncontrolled hyperkinetic movements.25

AntiNMDAR encephalitis is a commonly recognized and well-described type of autoimmune encephalitis affecting mostly young girls and women. The syndrome is initiated by teratoma or history of previous HSE. Clinical presentation is complex and includes a prodromal illness, psychiatric manifestations, neurologic symptoms (ie, movement disorder, epilepsy, or coma), and dysautonomia. Movement disorders are a common presentation that can often be complex and difficult to describe and persist during sleep or a comatose state and be self-injurious. Hyperkinetic movements are more common in children, whereas hypokinetic movement and catatonia are more common in teenagers and adults. Early-onset movement disorders can help differentiate antiNMDAR encephalitis induced by HSE from a relapse of HSE.

Diagnosis is based on clinical presentation along with the use of ancillary tests especially CSF and serum assay for antiNMDAR antibodies. Early initiation of immunotherapy within 4 weeks of treatment and tumor removal (if applicable) significantly improve long term neurologic outcome. Admission to the ICU, a poor response to immunotherapy, abnormal brain MRI brain, and CSF pleocytosis indicate poor prognosis for neurologic recovery. Movement disorder symptoms improve with immunotherapy, although drugs (eg, tetrabenazine) can be used for refractory orofacial dyskinesia. Persons under age 50 with new-onset movement disorders with multiple abnormal movements should have testing for serum and CSF antiNMDAR antibodies because early diagnosis and treatment improves long-term neurologic outcomes.