Social determinants of health, as defined by the World Health Organization Commission on Social Determinants of Health, are the conditions in which people are born, grow up, go to school, work, live, worship, and age.1,2 The conditions for each of these aspects of daily life shape health in myriad ways.

Looking at those social determinants, we see that there are many inequalities embedded in the daily conditions of our lives, and these translate into inequalities in health.3-5 These inequalities (or, disparities) are considered largely unjust and avoidable, namely—inequitable. One of the key drivers of health inequities is socioeconomic status (SES), which is defined in terms of a person’s social class, along with the educational, income, and occupational opportunities that are accessible within that class. Equally important in the US context are health inequities based on race and ethnicity, because of the history of racism and discrimination that place people from groups defined by race or ethnicity at social disadvantage vis-à-vis whites and that are deeply rooted in the social structures (institutions) and culture (beliefs, attitudes, and practices). Racial and ethnic disparities are observed in the access to and quality of health care and in general health and in specific health conditions.6-10 Gender inequality is another important social determinant of health. Women are not treated equally to men in all kinds of ways in our society, and gender and sexual minorities, including nonbinary and transgender individuals, are especially vulnerable due to stigma and discrimination.11-13 Age, which is often treated as a purely biologic factor in health and disease, is also a social determinant of health because different age groups (and individuals throughout their life course) have differential power and are treated differently in our society. All of these social factors noted above and others (eg, neighborhood conditions and psychological resources, like social support) translate into inequalities in health that go over and beyond biologic differences in health and disease.

As we delve more deeply into the social determinants of health, there are subtleties to each factor that require additional consideration. For example, occupational position is linked with education and income levels and is part of SES, but different occupations and work conditions also expose individuals to different levels and types of hazards, not only toxic agents, but also how much control you have over your position and whether or not you are able to mitigate stressors. Research shows that the less control you have over your job, the more likely you are to experience psychologic distress, which may translate into mental health problems. Similarly, the physical environment in which people live is an important social determinant of health, again exposing an individual to a variety of different hazards—from violence to unsafe housing and polluted spaces. The physical environment and community conditions also determine walkability to improve physical activity and availability of resources such as health care services, transportation, healthy food, and more.

Social environments also differ in terms of the social capital embedded in place—how people who live somewhere are connected, trust and support each other, or have a community identity. Relationships and psychosocial support within a community are critically important for health, both at the individual and community levels. For example, some research shows that closely-knit communities tend to have lower rates of disease and better physical and mental health than communities where people are more socially isolated and distrustful toward others.14 These relationships and community resources are considered intermediary social determinants of health because they mediate (and sometimes moderate—buffer or amplify) the relationships between structural social determinants (eg, SES, race, gender, age) and health.15

Structural social determinants of health occur at the institutional level and can be influenced by policy changes within our institutions. Intermediate determinants occur at the individual level—how people experience society based on the psychosocial supports available to them—and can be influenced by structural, cultural, and psychosocial interventions (Figure).16 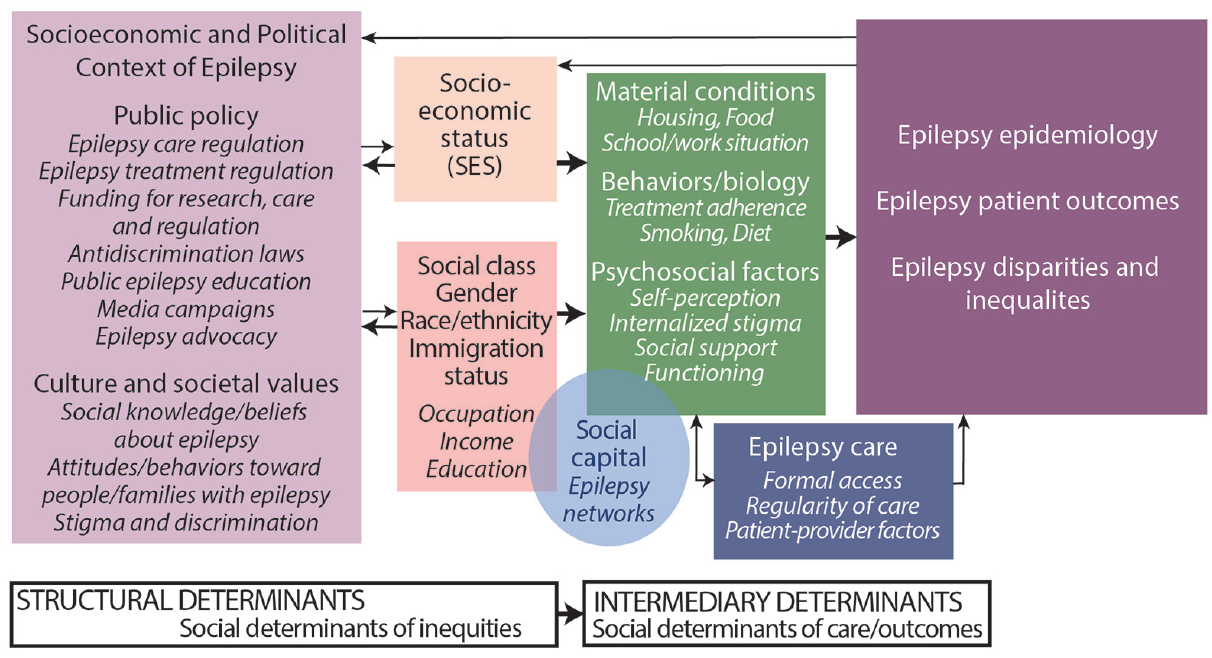 Figure. The social determinants of health framework applied to epilepsy.

Social Determinants of Health and Epilepsy

Understanding care for people with epilepsy within the framework of social determinants of health is relatively new and data are still limited.16-20 Disparities in access to medical and surgical treatment, levels of disability, and health literacy have been described.16 Socioeconomic deprivation increases the incidence and prevalence of epilepsy, and people with epilepsy have lower SES, less educational attainment, lower household incomes, and more difficulty finding employment.18 Although a study using a social determinants of health framework showed that prevalence of epilepsy did not correlate with poverty in the US, poverty did correlate with nonadherence to prescribed use of antiseizure medications (ASMs).19

In a hypothesis-driven study, my colleagues and I used data from the 2013, 2015, and 2017 NHISs to generate a sample of 1,655 people with epilepsy for retrospective analysis.16 Within this sample, although 52% were taking ASMs, only 40% saw an epilepsy specialist in the prior year; 37% had 1 or more seizures in the prior year. Those who did not have insurance were less likely to have seen a specialist (odds ratio [OR], 0.30; P<.001). Which region of the US a person resided in was the next strongest correlation with seeing an epilepsy specialist, with people living in the western (OR, 0.49; P<.01), midwestern (OR, 0.54; P<.01), and southern (OR, 0.60; P<.05) regions of the US being about half as likely to see a specialist compared with those living in the Northeast. However, there were no significant differences by race, ethnicity, or immigrant status in the use of specialists.

In this study, perhaps unsurprisingly, seeing an epilepsy specialist increased the likelihood of being treated with ASMs nine-to elevenfold. The number of seizures experienced in the previous year increased use of ASMs by 3 to 5.5 times compared with those with no seizures in the last year (P<.001 for all comparisons). Women were half as likely as men to use ASMs (OR, 0.59; P<.01). Black Americans and Hispanic/Latinx Americans were less likely than whites and nonHispanic/Latinx to use ASMs, although this did not reach statistical significance. Notably, people living in poverty were less likely to use ASM (OR, 0.61, P<.05). Interestingly, having public insurance appeared to increase the odds of ASM use compared with private insurance (OR, 1.86; P<.01), although this was not significant in models that excluded controls for seeing an epilepsy specialist.16

Considering that there are known inequities for Black Americans in the US health care system, it is perhaps surprising not to see differences in access to specialty care for epilepsy. This could reflect that the overall level of access to that care is low as discussed. However, there are differences in epilepsy care between Blacks and whites when it comes to accessing more advanced treatments for epilepsy that is refractory to medication, such as vagal nerve or deep brain stimulation or epilepsy surgery.17,18

When people with epilepsy are asked about their knowledge of such treatments, those from minoritized groups are less likely to be aware of advanced treatments or to have heard about them from their physicians.23 When minoritized individuals are aware of advanced treatments, they may have less confidence and trust regarding safety of the treatments because of the history of racism and mistreatment of minorities in medical research.24,25 These differences may explain why it is that access to advanced care occurs more quickly for whites than Blacks.

In our own research, we evaluated social determinants of health for people entering a trial for prescription grade cannabidiol, which was experimental at the time. Initially, only 4% of the participants came from minoritized groups and the majority of participants came from high SES. Over time, more people from minoritized and lower SES groups were participating.26,27 To us, this suggests that it takes more time and effort to bring new treatments to people from groups that have been discriminated against.

Root Causes and Some Potential Solutions

There is consensus that the roots of health disparities are historical and structural. Social determinants at that level can only be addressed at the level of community mobilization and political activity that leads to policy changes. At the individual level, clinicians may have opportunities to improve access to care and advanced treatments through the patient-provider relationship and advocacy, which can then become a positive intermediary social determinant—a source of psychosocial support, health education, and patient empowerment. It is important for clinicians to understand that SDH can account for as much as 80% of variation in health,28 making it essential to understand where the patient stands socially and how social conditions can shape a patient’s course of disease and outcomes, over and beyond biologic factors and medical intervention. It may require “going the extra mile” but can be especially beneficial to discuss or, when time is limited, have other team members discuss with patients what social or psychosocial resources they may need and how these can be accessed.

To improve the patient-provider relationship in their practice, clinicians need to be self-reflective, considering their own social determinants and implicit biases that these may have instilled.29 With that self-awareness, a clinician might, for example, be faster to offer advanced treatments to patients from minoritized groups than they would have before—letting go of assumptions that certain patients might not even be willing or able to consider those. We all have to do this because we all live with our own specific social identities every day, which affects how we see ourselves and other individuals. Medical education has been improving in this regard, with courses on physician’s place in society, patient-provider communication, community and population health, and more. There is also a greater emphasis on empathy and self-reflection than in the past.

Thinking specifically about social determinants of health in epilepsy, medical education and team-based care are also important potential solutions that warrant further study. Because there are not enough neurologists or epilepsy specialists in most areas to meet the needs of people with epilepsy, waits to see an epilepsy specialist can be long. We have to invest in training more neurologists and epilepsy specialists to address the demand for epilepsy care. Recruiting medical students into this specialty as well as creating more residency and fellowship programs are some potential approaches. Continuing professional education is also needed to target community providers to identify treatment-resistant epilepsies early and refer these patients promptly to specialized epilepsy care (eg, tertiary care epilepsy centers), where advanced diagnostic tools and state-of-the-art treatments (eg, surgery) allow to more quickly improve patient outcomes and move them toward seizure freedom. That also requires letting go of any assumptions about hierarchies in medicine and economic considerations to be truly collaborative for the good of the patient.

The effects of SDH in epilepsy are only just starting to be researched. More research on access to care is needed, and there is no data yet on how SDH affect diagnostic accuracy or time from first seizure to diagnosis. There is qualitative data suggesting that SDH affect time to receiving advanced treatments in the case of refractory epilepsy, but quantitative data is needed so that potential interventions, such as community provider education programs, can be developed and implemented.

Physicians can also address SDH and health disparities by participating in advocacy work with the American Neurological Association or American Epilepsy Society as well with organizations in their own communities, such as the Epilepsy Foundation and its regional chapters. At the individual level, clinicians can be self-reflective, especially in terms of their implicit biases, and empathetic to ensure they are able to develop and sustain trusting and effective patient-provider relations.

22. Cui W, Kobau R, Zack MM; US Centers for Disease Control and Prevention, Epilepsy Program. Among adults with epilepsy reporting recent seizures, one of four on antiseizure medication and three of four not on medication had not seen a neurologist/epilepsy specialist within the last year, the 2010 and 2013 US National Health Interview Surveys. Epilepsy Behav. 2016;61:78-79.