Mrs. D, age 56 with a past medical history of seropositive rheumatoid arthritis (RA), hyperlipidemia, obesity, and tobacco use, was evaluated by her primary care provider for dizziness. Her relevant family history included Parkinson disease in her father and RA in her sister. Mrs. D was taking methotrexate for RA, atorvastatin for hyperlipidemia, and duloxetine for chronic pain. Her dizziness had evolved over the past 2 weeks, and she described it as an intermittent room spinning sensation with occasional accompanying left ear pain. She reported that she had no hearing loss, visual changes, headaches, numbness/tingling, aphasia, weakness, or confusion. Treatment with meclizine and prednisone was started.

Despite treatment, Mrs. D’s dizziness continued and 1 week later, she presented to the emergency department with intensified dizziness. On examination she was oriented to person, place, and time with clear speech. Her pupils were equal, round, and reactive to light, and her extraocular movements were intact. Slight nystagmus was noted with lateral gaze to the right. No sensory, motor, or visual field deficits were noted.

Mrs. D’s brain CT and CT angiography findings were unremarkable, but her brain MRI showed acute and subacute infarcts involving the central and left aspect of the splenium of the corpus callosum, left periatrial white matter/thalamus, left basal ganglia, and anterior right cingulate sulcus. She had an initial stroke workup including electrocardiogram, 24-hour cardiac monitoring, and echocardiography, which were negative.

Mrs. D returned 3 days later after her family found her confused and incontinent in her home. She further complained of headaches, dizziness, and generalized weakness. Physical examination findings were the same as previously except for the absence of nystagmus and inability to recall her recent episode of confusion. Approximately 1 week later, she reported decreased hearing on the left and developed acute confusion and dysarthria. Mrs. D continued to be encephalopathic with increasing agitation and experienced new symptoms of diplopia and internuclear ophthalmoplegia as diagnostic testing continued. 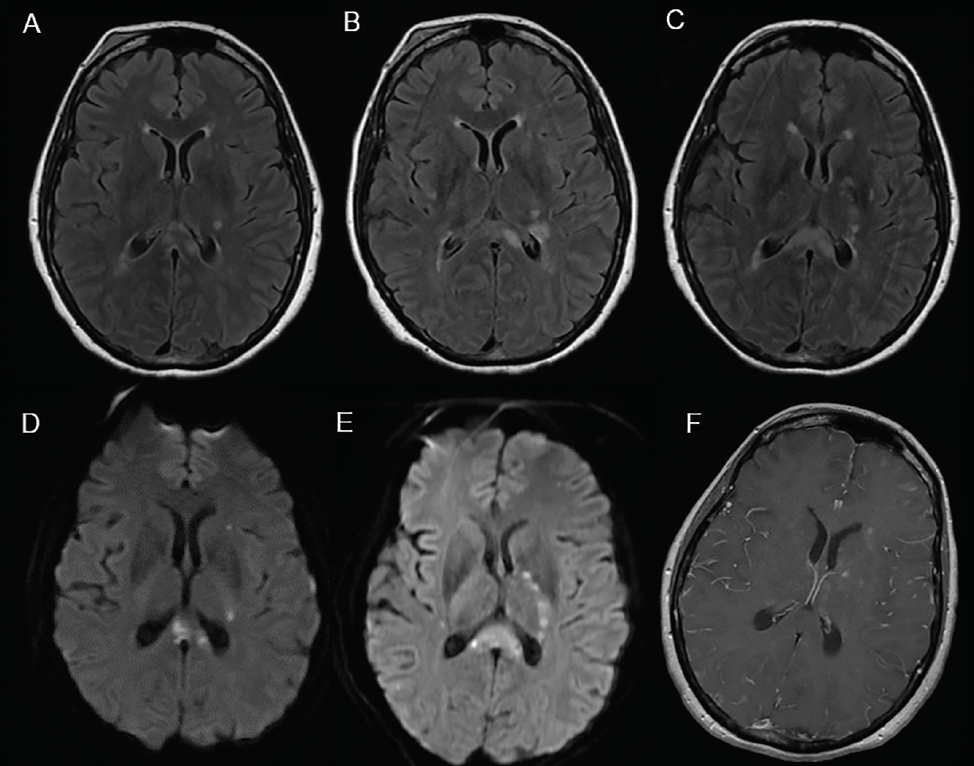 Blood and CSF analyses findings are shown in Table 1 and 2 and testing for coagulopathy was negative. Mrs. D had no seizure activity on EEG and cerebral angiography findings were inconsistent with CNS vasculitis. 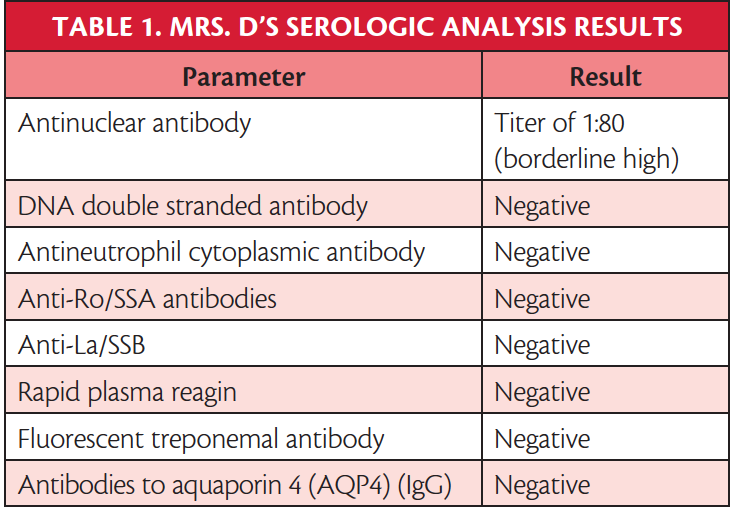 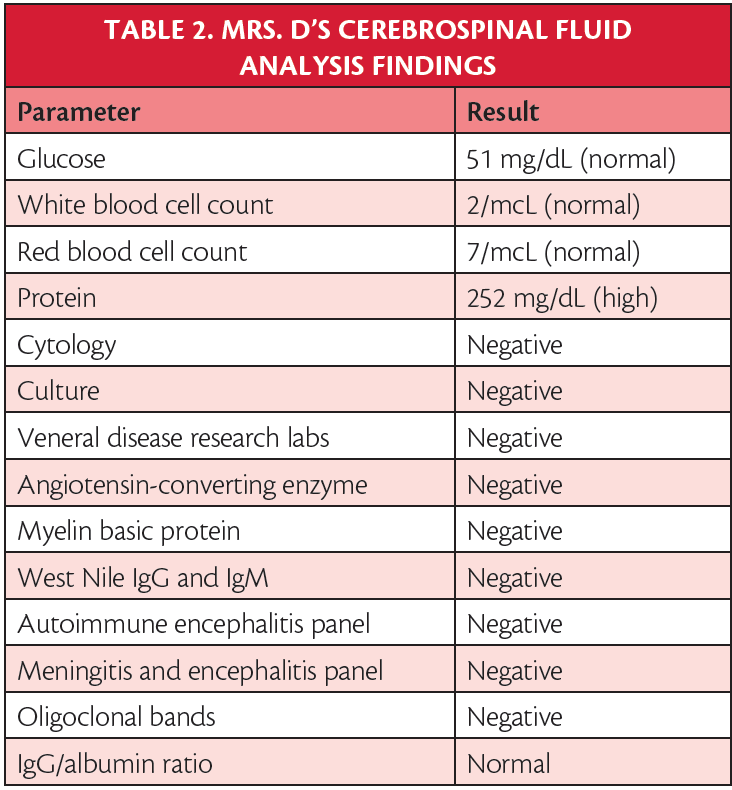 1. Considering the differential diagnosis for multiple sclerosis (MS), what imaging finding of Mrs. D’s would be atypical?

a. Lesions in the splenium of the corpus callosum

2. Combined with previous clinical symptoms of encephalopathy and hearing loss, for which diagnosis might the additional visual symptoms raise suspicion?

B. The triad of encephalopathy, sensorineural hearing loss, and visual distortion should prompt consideration of Susac syndrome, in which autoimmunemediated occlusion of vessels in the brain, retina, and inner ear is thought to be responsible for this triad of symptoms. Very few people, however, present with all components of the triad initially.2,3 Characteristic neuroimaging findings are the triad of white matter lesions, (with preferential involvement of the central corpus callosum), deep gray matter lesions, and leptomeningeal enhancement, as seen on Mrs. D’s MRI.1

Although formal audiologic testing was not possible before treatment, clinical evidence of vestibulocochlear involvement and imaging evidence of brain and retinal involvement were typical for Susac syndrome. Later outpatient audiometry confirmed bilateral sensorineural hearing loss across all frequencies, more severe in the left ear.

Mrs. D was treated with intravenous immunoglobulin (IVIG) and intravenous methylprednisolone 1 g/day for 5 days. On the third day, of this treatment course, treatment with mycophenolate mofetil was initiated, however neuroimaging continued to show new diffusion-restricted lesions. Mycophenolate mofetil was stopped after 4 days and intravenous cyclophosphamide 80 mg/m2 initiated. Because testing before initiation of immunosuppressive treatment showed Mrs. D had chronic hepatitis B, tenofovir 25 mg/ day was added to prevent reactivation of the virus by immunosuppression. After cyclophosphamide treatment, Mrs. D improved and was transferred to an acute rehabilitation facility with plans for monthly cyclophosphamide infusion and prednisone taper. She continued to receive her regular subcutaneous injections of methotrexate 25 mg/0.4 mL weekly for rheumatoid arthritis throughout her treatment, in addition to oral aspirin 325 mg and subcutaneous injections of enoxaparin 40 mg/day.

Susac syndrome, although not completely understood, is thought to be an autoimmune endotheliopathy that results in inflammation-related occlusion of the microvessels in the brain, retina, and inner ear. The variability in initial presentation of Susac syndrome makes prompt establishment of the diagnosis challenging. The clinical triad of encephalopathy, low-frequency hearing loss in at least 1 ear, and branched retinal artery occlusion (BRAO) in at least 1 eye is considered diagnostic; however, only 13% of reported cases presented with this full picture initially. Of the 304 globally reported cases, initial manifestations have consisted of CNS symptoms in 67%, visual symptoms in 40%, and auditory symptoms in 37%. Headaches have been experienced in 80% of cases at initial presentation, and in 85% of cases, the full triad was seen at some point in the disease course. Acute or subacute encephalopathy manifests as impaired cognition and memory, confusion, emotional disturbance, behavioral disturbance, psychosis, or personality changes. Other CNS symptoms include ataxia, vertigo, dysarthria, motor or sensory deficits, and headache with migrainous features. Women ag 21 to 35 are most commonly affected.2

Considering the many conditions that may have clinically similar presentations, MRI, retinal fluorescein angiography (FA), and audiometry are imperative to establishing the diagnosis. Retinal FA should be completed even in the absence of visual symptoms, as BRAO has been present in nearly all reported cases of Susac syndrome, and arterial wall hyperfluorescence (AWH) in normal-appearing retinal arterioles is considered pathognomonic. Gass plaques—small yellow plaques in retinal artery walls—are another common ophthalmologic finding, particularly in the acute phase of disease.4 Mrs. D had BRAO on FA, but no AWH or Gass plaques.

Some diagnostic criteria consider the triad of white matter lesions, deep grey matter lesions, and leptomeningeal enhancement on MRI diagnostic for Susac syndrome and also permit the diagnosis of Susac syndrome in the absence of the full neuroimaging or clinical triad if there is evidence of central callosal lesions on MRI or AWH on FA remote from BRAO.4 Other proposed criteria for a definite diagnosis require clinical findings of brain, retinal, and vestibulocochlear involvement in combination with pertinent neuroimaging, ophthalmologic, and inner ear examination findings.5

Corpus callosum infarcts are rare and should cause consideration of noncardioembolic etiologies. The particular involvement of the genu, corpus, and splenium of the corpus callosum on T2-weighted images is a key indicator for Susac syndrome and can help in differentiating between potential misdiagnoses (eg, MS or acute disseminating encephalomyelitis [ADEM]). In Susac syndrome, multifocal hyperintensities appear as small, round “snowball” lesions that primarily involve the central portion of the corpus callosum and spare the periphery. Lesions of MS and ADEM are more commonly oval in shape and located at the undersurface and septal interface of the corpus callosum.1

The prognosis of Susac syndrome has been described as following 3 different courses: monocyclic, polycyclic, or chronic continuous. The monocyclic course, which is the most common, has an active period lasting less than 2 years, whereas the polycyclic course is characterized by relapses extending beyond 2 years. Most cases presenting with encephalopathy within the first 2 years follow the self-limited monocyclic course.6

The best treatment option for Susac syndrome is not presently known. Anecdotal reports have recommended IVIG and corticosteroids as initial therapy; the absence of IVIG within the first 6 months is correlated with increased relapses. Other commonly used treatments include immunosuppressive therapies such as mycophenolate mofetil, rituximab, and cyclophosphamide. Patients should be followed closely, and removal of immunosuppressive drugs may be indicated once a person is determined to be in remission.4