The neurologist has a critical role in screening, diagnosis, and treatment.

Adding to the burden of depression and the difficulty accessing mental health care, some antiseizure medications (ASMs) may have increased risk of psychiatric side-effects on both mood and cognition, particularly during titration of these drugs. It is important to note, however, that the increased prevalence of depression remains after controlling for use of ASMs.10 Additionally, some ASMs have positive effects on mood and may be better choices for people with both depression and epilepsy (See Treatment).11

The stigma, stress, and other psychosocial aspects of epilepsy can lead to social isolation, withdrawal, and other depressive symptoms, which can explain some of the effects on quality of life.12 However, the prevalence of depression in epilepsy is higher than that found in other similarly stigmatizing conditions, suggesting there may be shared mechanisms for epilepsy and depression. This is further supported with data that people with depression are more likely to develop epilepsy, suggesting a bidirectional mechanism for the 2 conditions.13

In animal and human studies, 3 potential sources for a shared mechanism of depression and epilepsy have been suggested.14,15 First, structural changes in depression are also seen in some cases of temporal lobe epilepsy (TLE). The increased prevalence of depression in people with TLE, however, is independent of those changes. Second, serotonin dysfunction is a successful treatment target for depression and the serotoninergic system is widely accepted as playing a role in depression. Serotonin dysfunction is also seen in some forms of epilepsy, and is known to affect other neurotransmitters, including glutamate, GABA, and dopamine. Third, is physiologic stress with subsequent cortisol release via the hypothalamic-pituitary-adrenal axis, known to play a role in depression and catamenial epilepsy. This is supported by the creation of animal models of epilepsy, kindling, by cortisol injections. Finally, all 3 of these potential shared mechanisms may be involved, with a complex interaction and balance between them (Figure) determining whether only epilepsy or depression or both are present in a given individual. Understanding shared mechanisms may eventually lead to treatments that are optimized for individuals with epilepsy and depression, especially for those whose seizures are refractory to currently available treatments whose polypharmacy can add to depression. 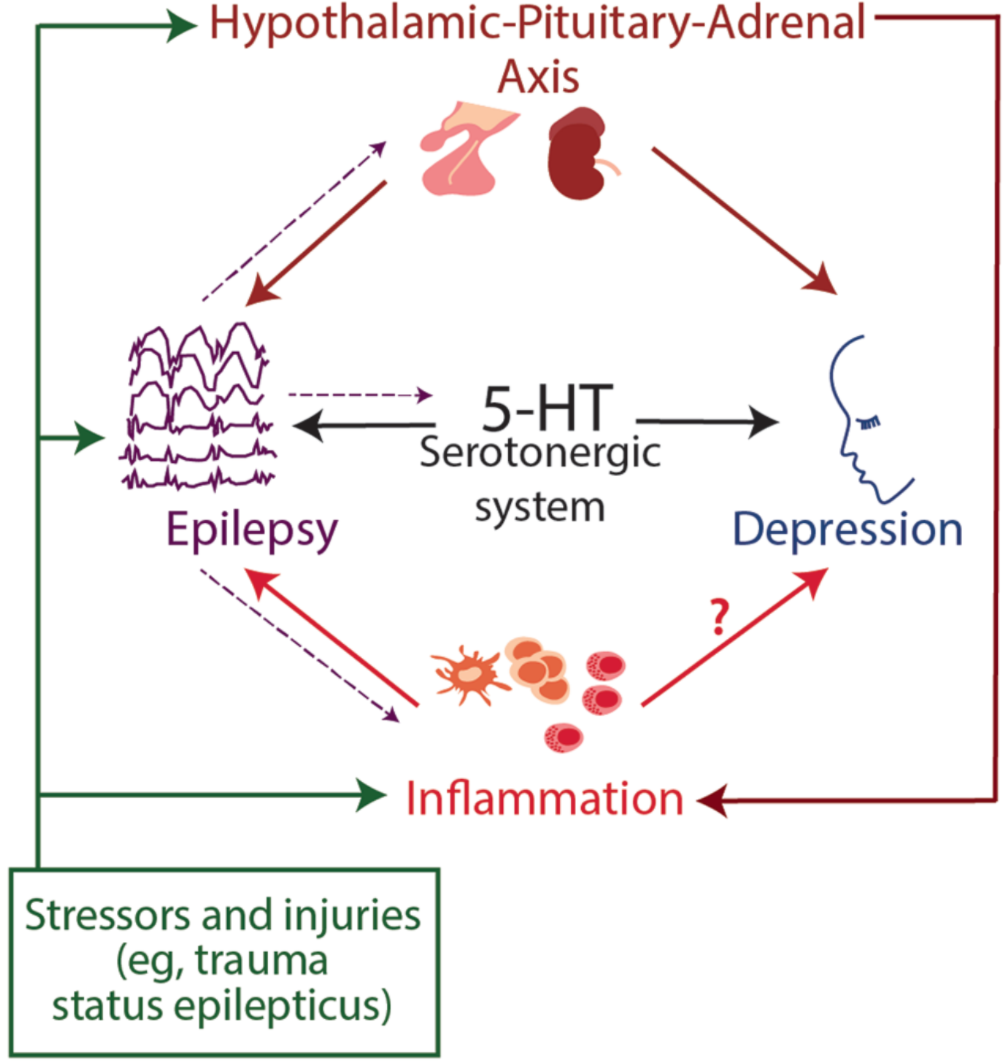 As we continue to work toward treatments that may address shared mechanisms, it is critical that neurologists caring for people with epilepsy identify and address comorbid depression. The Neurologic Disorder Depression Inventory-Epilepsy (NDDIE) is validated for assessing the presence of depression and suicidality in people with epilepsy.16,17 The NDDIE is a 6-question rating scale (Table) that can be answered by the patient with pen and paper and then be scored by the clinician or be administered and scored during the appointment. Typically, it takes 1 to 5 minutes to complete. Alternatively, patients can be assessed only for suicidality using question 4 of the NDDIE, which takes less than 1 minute. A score of 14 or more on the NDDIE indicates the presence of depression. Answering question 4, “In the last 2 weeks I’ve felt I’d be better off dead,” with rarely or often (score of 3 or more) indicates the presence of suicidality and should be addressed emergently.16-18 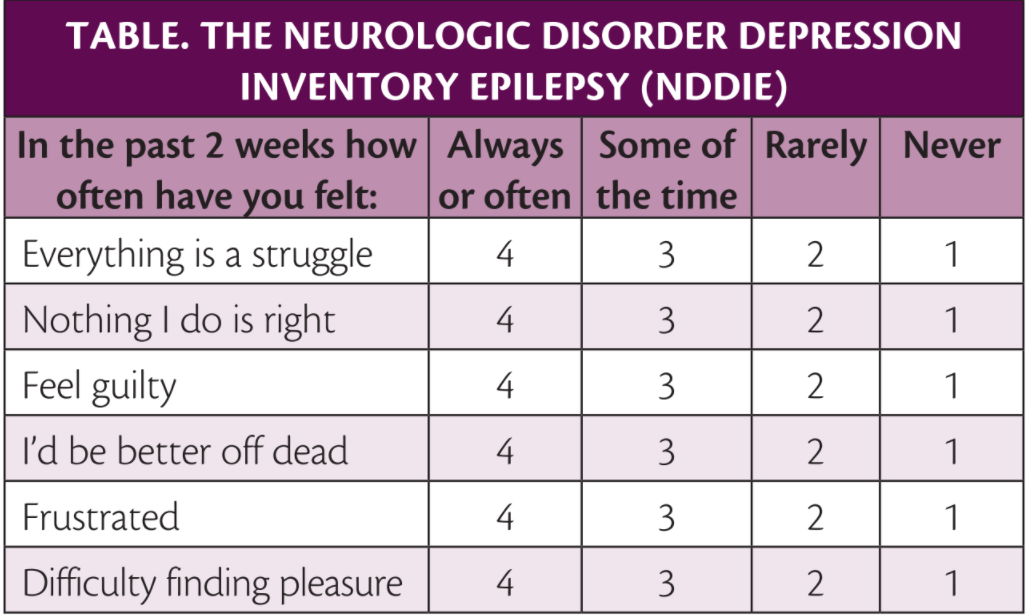 Although the best practice after a positive screening evaluation is to collaborate with a psychiatrist or neuropsychologist for further assessment and treatment, as noted, this is not always possible because of poor access to mental health care. Thus, the neurologist should become comfortable identifying the most likely source of symptoms and addressing those appropriately.

The NDDIE screens for the presence of depressive symptoms and suicidal thinking. It does not identify whether depressive symptoms are comorbid depression, part of an ictal or peri-ictal phenomenon, a side effect of ASMs, changes to psychosocial issues, or a combination of these factors. Depression in people with epilepsy may have features that well match the Diagnostic and Statistical Manual of Mental Disorders (DSM) or International Classification of Disease (ICD). However, several patterns of depressive symptoms unique to epilepsy have also been described.19-22

Depressive symptoms caused by ASMs should be considered if there has been a recent change in treatment or if there are barriers to adhering to treatment. Depression is also a well-known complication of epilepsy surgery that occurs in up to 30% of people treated with this modality. Just as risks for adverse events of ASMs are higher when starting the treatment, so too complications of epilepsy surgery are more frequent in the first 3 months after surgery.

Management of perictal and ictal depressive symptoms is primarily directed at improving seizure control, either with a change or addition of ASMs, consideration of neurostimulation therapies (which have efficacy for both depression and epilepsy23), and epilepsy surgery as appropriate.15,24 Any change in treatment should be carefully titrated with regular monitoring for any worsening of depressive symptoms, particularly the presence of suicidality.

Comorbid depression can be treated safely by nonpsychiatrist physicians, including neurologists,24-26 when psychiatric evaluation and treatment is not available or while patients are waiting to see a psychiatrist. If delusional thinking, auditory hallucinations, risk factors for bipolar disorder or a comorbid addiction disorder is identified, expedited referrals to psychiatry are warranted.

Obtaining information from caregivers, family members, and other social supports in a person’s life can be helpful for identifying features of depression and monitoring progress. These supports can also be helpful in promoting adherence to treatment and their involvement in and of itself can be therapeutic at times. Engaging family, friends, and other psychosocial supports is an essential part of care for depressive symptoms.24 Engaging social workers and other available communities supports whenever possible may also be beneficial.

Although all antidepressants include the potential for seizures in the possible adverse events, this is an historical a priori statement; evidence from clinical trials shows there is no increased risk of seizures with therapeutic doses of antidepressants compared with placebo.29 There are limited data for use of antidepressants in epilepsy; typically, the side effect profile and potential interactions are considered and selective serotonin or selective norepinephrine reuptake inhibitors (SSRIs or SNRIs) are preferred. Of the SSRIs, citalopram and escitalopram have the lowest potential for interactions with ASMs followed by sertraline (mild inhibitor), or fluoxetine or paroxetine (moderate inhibitors). The SNRIs are considered to have low potential for interactions with ASMs.

As with ASMs, therapy with SSRIs and SNRIs must be carefully titrated and individualized. Start low and go slow applies to use of antidepressants. Assessment within the first 3 weeks of treatment and then at monthly to bimonthly intervals with use of validated depression scales, such as the NDDIE is warranted.

There is a bidirectional relationship between depression and epilepsy with mechanisms that, as yet, are not fully understood. A role for the hypothalamic-pituitary-adrenal axis has been suggested as have the role of disrupted neural networks for both conditions. Regardless of the etiologic and pathophysiologic mechanisms, treatment of depression in epilepsy is associated with improved outcomes.27-30 Considering current challenges of accessing mental health care, neurologists treating people with epilepsy should screen for comorbid depression and be prepared to manage depression in persons with epilepsy as needed.

24. Munger Clary HM, Salpekar JA. Should adult neurologists play a role in the management of the most common psychiatric comorbidities? Practical considerations. Epilepsy Behav. 2019;98(Pt B):309-313.