Mr. C, age 48, developed fevers, headache, and a poor appetite 2 weeks before presenting to an outside hospital with hallucinations. On exam, he exhibited lethargy, confusion, agitation, and short-term memory loss.

Mr. C’s clinical course during a 4-week hospital stay was complicated by development of urinary retention and syndrome of inappropriate antidiuretic hormone secretion (SIADH). At approximately 2 weeks he had developed leukopenia and lymphocytopenia.

SARS-CoV-2 testing was not performed at this time. Repeat CSF analysis showed increased lymphocytic pleocytosis with WBC 171/mcL [99% lymphocytes], protein 112 mg/dL, and glucose 61 mg/dL. Results were negative for CSF antibodies to NMDAR antibody and cultures and cytology remained negative. Chest, abdominal, and pelvic CT with contrast were negative for malignancy.

Because both encephalopathy and urinary retention spontaneously improved, Mr. C did not receive treatment and was ultimately felt to have meningoencephalitis of unknown etiology and discharged.

Mr. C developed recurrence of urinary retention, constipation, and new ascending paresthesias in the bilateral lower extremities approximately 2 weeks after his initial discharge and returned to the outside hospital (8 weeks after initial symptoms). SARS-CoV-2 nasopharyngeal PCR was positive at presentation, and serum IgM test was positive 5 days later, although Mr. C had no respiratory symptoms.

Spinal MRI revealed T2 signal abnormality throughout the cervical (C3-C7) and thoracic (T10) spinal cord with patchy enhancement consistent with transverse myelitis (Figure 1). Creatine kinase (CK) was mildly elevated at 262 IU/L (normal range: 22-232 IU/L). Analysis of CSF was not repeated because of Mr. C’s COVID-19 positive status. He was treated with intravenous methylprednisolone 1000 mg daily for 5 days and had 5 sessions of therapeutic plasma exchange. After completing treatment, his bilateral lower extremity weakness and paresthesias improved and he was transferred to rehabilitation with residual right lower extremity weakness, approximately 13 weeks after his initial symptoms. 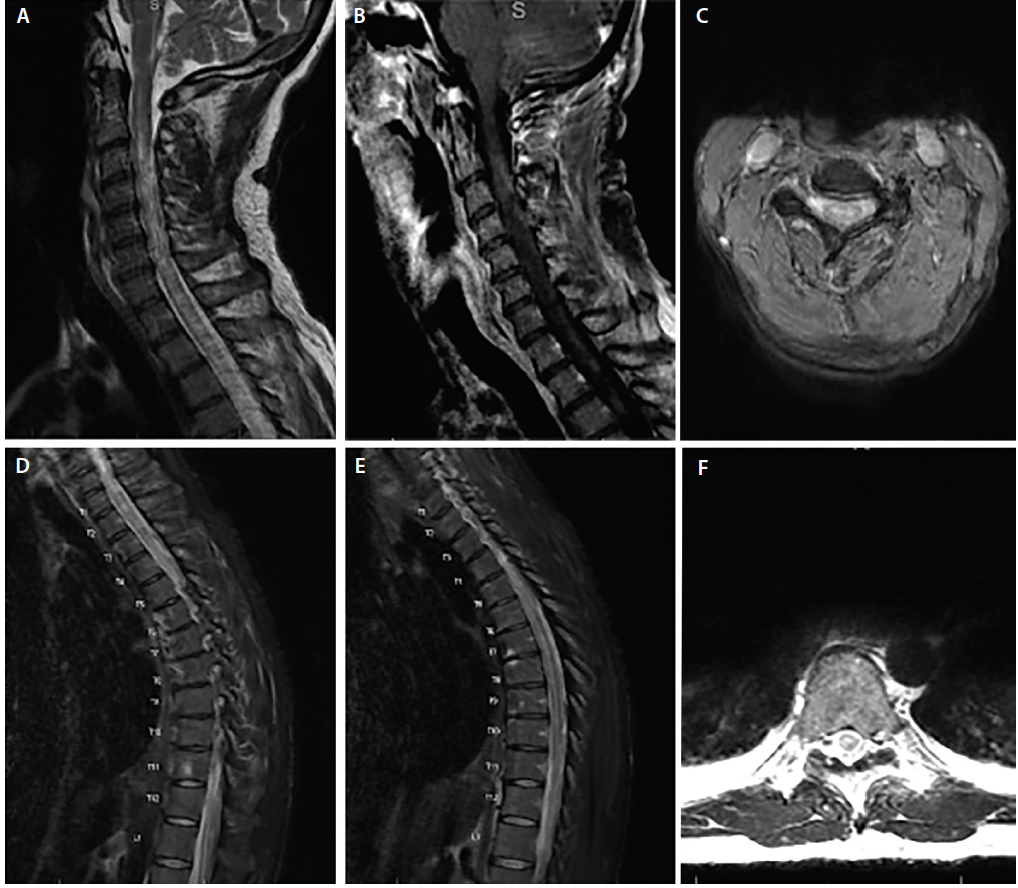 Mr. C was treated with intravenous methylprednisolone 1,000 mg for 5 days and then transitioned to an oral prednisone taper while undergoing 5 sessions of therapeutic plasma exchange. He was treated with intravenous rituximab 1,000 mg just prior to discharge to an acute rehabilitation facility and received a second infusion of rituximab 1,000 mg as an outpatient 2 weeks later. At the time of his second rituximab infusion, approximately 21 weeks after his initial symptoms, Mr. C had improved urinary retention and left lower extremity strength but reported persistent right lower extremity weakness with frequent and painful muscle spasms.

The number of known neurologic manifestations of SARS-CoV-2 infection have been rapidly accumulating in the literature. Various mechanisms have been postulated including virus-induced hyperinflammatory and hypercoagulable states, direct virus infection of the central nervous system (CNS), and postinfectious or immune mediated processes. SARS-CoV-2 has been shown to cause numerous neurologic sequelae, including meningoencephalitis, ischemic or hemorrhagic stroke, and acute disseminated encephalomyelitis (ADEM).1,2 Following respiratory symptoms, acute transverse myelitis has also been reported.3-7> Neuromyelitis optica (NMO) is a rare inflammatory demyelinating disease of the CNS, predominantly affecting the optic nerves and spinal cord.8 The pathogenic mechanism of NMO has been attributed to specific autoantibodies to AQP4; however, the etiology or primary immunizing event remains poorly understood. Some studies have suggested a triggering role for infectious agents.9

We report a case of NMO occurring in a person who initially presented with acute meningoencephalitis of unknown etiology and was found to be SARS-CoV-2 antibody positive shortly thereafter. To the best of our knowledge, this is the first report in which SARS-CoV-2 infection preceded a clinical attack of NMO.

Viral infections usually precede NMO in 15% to 35% of cases, but their linkage with antibodies to AQP4 remains unclear. Possible mechanisms to explain the association of autoimmunity with viral infection are bystander activation, in which microbes damage AQP4-rich tissue leading to activation of AQP4-specific T and B cells, or molecular mimicry, in which the activation of B cells produces antibodies that recognize both microbial epitopes and self-epitopes (ie, AQP4).10

Outside of the CNS, AQP4 is expressed in numerous cell types including fast twitch skeletal muscle fibers, the basolateral membrane of epithelial cells in the stomach and intestines, epithelial airway cells, and the principal and collecting duct cells in the kidney.11 Peripheral organ dysfunction has become increasingly recognized in NMO. Specifically, complement activating antiAQP4 also targets sarcolemma AQP4 channels in people with NMO.12 HyperCKemia has been seen in individual cases of NMO and quantitative serum CK levels have been found to be significantly higher during vs in between NMO relapses.13 In this context, Mr. C’s CK levels above 2000 IU/L was indicative of active NMO. Viral infections affecting peripheral tissue, such as AQP4-rich muscle, may induce myositis causing bystander activation of AQP4 T and B cells, the latter of which produce antiAQP4. Peripherally, muscle tissue may also be affected by these antibodies leading to hyperCKemia and myopathy in NMO.

In the CNS, AQP4 clusters in perivascular astrocyte foot processes. Elimination of AQP4 in mouse models suggests a role in ependymal resorption of CSF as these animals have accelerated cerebral ventricle expansion and elevated intracranial pressure (ICP).14,15

Astrocyte damage mediated by antiAQP4 occurs via the complement pathway and agents targeting this pathway decrease inflammation, astrocytic injury, and rates of relapse in NMO.16 Eculizumab, a humanized monoclonal IgG which binds to complement protein C5 preventing terminal complement activation, was recently approved for the treatment of NMO.

Interleukin-6 (IL-6) receptor levels have been shown to be increased at the time of an NMO relapse, and the plasmablast population also increases during this phase. Therefore, in refractory NMO, monthly infusions of tocilizumab, an IL-6 receptor-blocking antibody, should be considered to potentially decrease antiAQP4 production and reduce the numbers of circulating plasmablasts.16,17 As this article goes to press, another anti-IL-6 receptor-blocking antibody, satralizumab has also been approved for the treatment of NMO.18

We hypothesize Mr. C’s acute meningoencephalitis was caused by primary SARS-CoV-2 infection considering the detection of SARS-CoV-2 antibodies and positive nasopharyngeal swab test on subsequent hospitalization. It is plausible this triggered an initial acute attack of NMO and subsequent relapse. This is the first case report of NMO potentially incited by SARS-CoV-2 infection. While causality remains difficult to prove, the temporal relationship between SARS-CoV-2 infection and NMO attack in this case seems compelling for parainfectious phenomenon. Further reports are needed to confirm this association.

TYC and DM report no disclosures