Mr. M, age 30, presented to a US hospital with severe headaches and abdominal pain with no clearly identifiable cause. He was discharged with a diagnosis of suspected kidney stones. He returned twice more to the same emergency room with similar symptoms and was discharged home after both visits. After 10 days of progressive symptoms, he developed paresthesias, saddle anesthesia, and urinary/fecal retention. He returned to the same hospital and was subsequently transferred emergently to a hospital with neurologic specialty capability.

Mr. M, from the central African country Chad, had been in the US for the prior 6 months and had no known medical history. He denied any tobacco, alcohol, or recreational drug use. He reported having lived in the capital city of Chad for his entire life and denied drinking, swimming or bathing in untreated freshwater, or any other unusual exposures. He denied any medical family history. On arrival after his emergent transfer, his neurologic examination revealed near-complete sensory loss of the right lower extremity, perianal area, and genitalia with a spinal cord sensory level at L1/T12. Neurologic examination also demonstrated hyporeflexia of the right lower extremity and loss of the cremasteric reflex bilaterally with reduced rectal tone. 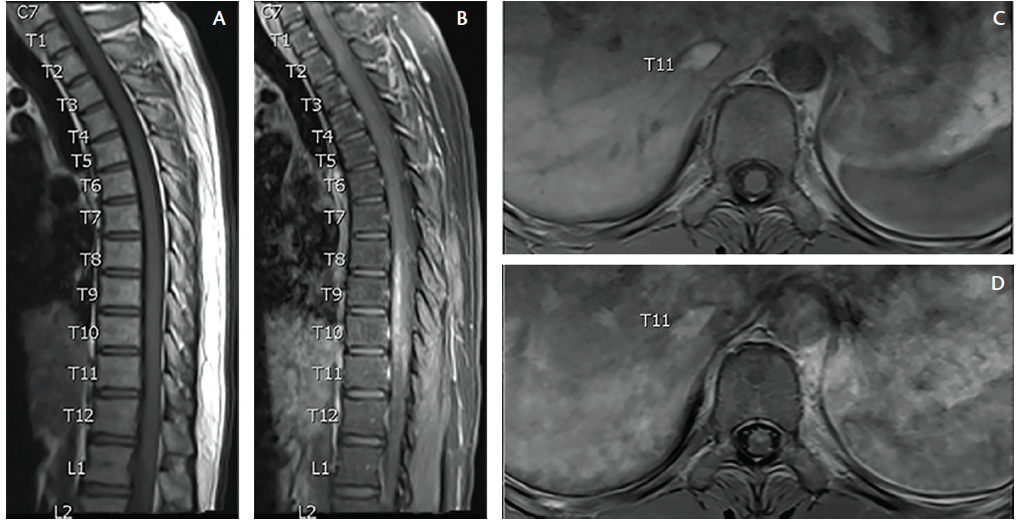 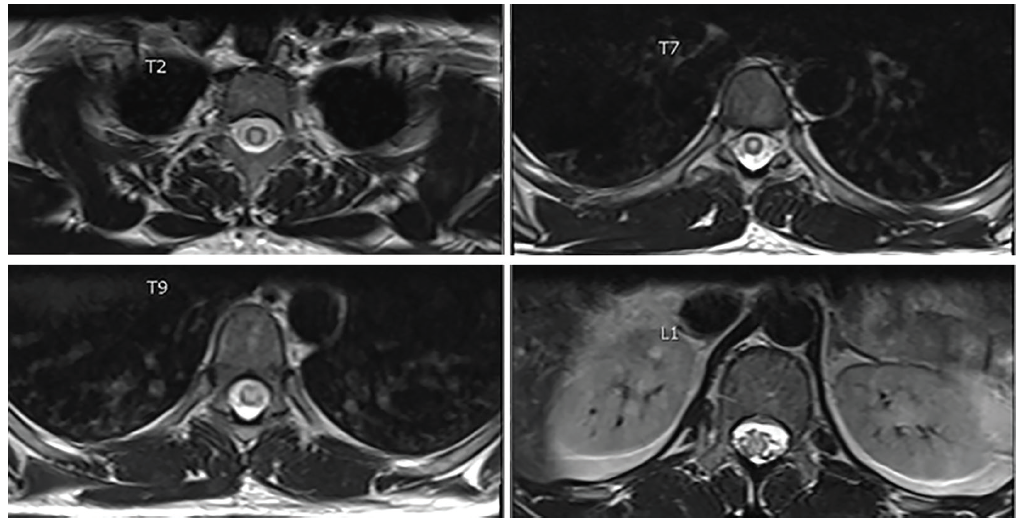 A lumbar puncture was subsequently performed and cerebrospinal fluid (CSF) analysis findings were notable for elevated protein (130 mg/dL) and increased nucleated cells (65/mcL in tube 2 and 70/mcL in tube 4) with pathology review demonstrating mature-appearing lymphocytes and increased eosinophils. Importantly, the CSF RBC count was normal, cytology revealed no malignant cells, and a comprehensive infectious evaluation was negative. All relevant lab results and reference values are presented in the Table.

Based on the peripheral and CSF eosinophilia and Mr. M’s country of origin, both general serum schistosomiasis IgG and species-specific antibody tests were ordered. Urine was tested for ova and parasites on multiple occasions and findings were negative.

Mr. M was admitted to the hospital, and on the third day of his stay, while awaiting further testing, methylprednisolone 1 g/day was started empirically and continued for 5 days with no improvement in neurologic symptoms. Although a parasitic infection was on the differential diagnosis, antiparasitic treatment was not initiated because of Mr. M’s denial of swimming or wading in any freshwater at any time in his life, his lifelong residence in an urban setting, and the appropriately broad differential diagnosis for transverse myelitis in the setting of mild eosinophilia. Consultations with experts in parasitic infections of the central nervous system (CNS) also expressed concern for potential adverse effects of praziquantel in the setting of alternate CNS parasitic infections (eg, angiostrongyliasis), which contributed to the decision not to give empiric antiparasitic treatment. Mr. M was discharged from the hospital after 7 days.

At his initial 1-week follow-up visit, Mr. M’s sensory symptoms and gait were improving, but he was still unable to obtain an erection or urinate independently, requiring intermittent catheterization. The prednisone taper was continued, and subsequent species-specific serum antibody immunoblotting from the Centers for Disease Control (CDC) confirmed the presence of IgG for Schistosoma mansoni. Findings of an enzyme-linked immunoassay (ELISA) for Schistosoma ELISA were also positive (100, reference value<10). At his 1-month follow-up, Mr. M was able to urinate, defecate, and obtain an erection independently. His reflexes and gait had normalized, and his sensory symptoms had nearly resolved with minimal residual numbness of the right plantar foot. Serial repeat serum testing showed sustained resolution of peripheral eosinophilia.

Schistosoma infection is acquired when a person comes into contact with infected fresh water and the parasite penetrates the skin. Freshwater snails serve as the intermediate host for the parasite and release thousands of infective schistosomal larvae into freshwater. Larvae, termed cercaria, penetrate human skin with proteolytic enzymes and mechanical activity and invade the lymphatic system. The organisms enter the systemic circulatory system and migrate to the lungs where they mature. Mature Schistosoma then reenter the bloodstream via the hepatic portal system.1,8 In spinal infections, the adult Schistosoma lay eggs in the hepatic portal system that travel through the valveless paravertebral veins of Batson (Batson’s plexus) to reach the lower spinal cord. More rarely, adult worms migrate to the CNS.3 Eggs can then spread throughout the CNS via normal CSF circulation.

Neuroschistosomiasis can involve the brain, spinal cord, or both. Sites of involvement vary significantly among species. Cerebral involvement is more common with Schistosoma japonicum, and spinal complications are more common with Schistosoma mansoni and Schistosoma haematobium. Cerebral schistosomiasis can cause seizures, diffuse encephalopathy, cerebral vasculitis and stroke-like symptoms, or a cerebellar syndrome.9 Rarely, granulomatous inflammation can cause obstructive hydrocephalus.6,7 Spinal schistosomiasis typically presents as acute myelopathy with transverse myelitis or as cauda equina syndrome with symptoms of flaccid paraparesis, urinary retention, and variable paresthesias. Often, back or flank pain precedes neurologic symptoms.2

Lack of timely recognition and treatment of neuroschistosomiasis is an increasingly recognized cause of neurologic morbidity and mortality in the developing world.8

Making the diagnosis can be difficult because diagnostic modalities are limited. The standard for testing remains direct visualization of Schistosoma eggs from stool or urine samples. However, visual diagnosis is challenging, and diagnostic yield is dependent on the timing of an individual’s presentation, timing of sample collection, and the experience of the microbiology lab. Schistosoma eggs do not appear in the urine until at least 2 months after the initial infection, and eggs are shed at different times in the stool or urine depending on the species.10 For Schistosoma mansoni, a Kato-Katz thick stool smear is 85% sensitive and 100% specific.10 Our hospital, however, did not have this testing modality available because the prevalence of schistosomiasis is very low in the US.

Serologic tests for schistosomiasis include the Falcon assay screening test (FAST) ELISA, fluorescent microscopy immunoassay (FMI), and immunoblot (IB) testing. The FAST ELISA and FMI both use microsomal fractions of adult Schistosoma mansoni as an antigen and are therefore highly specific and sensitive for Schistosoma mansoni but are less sensitive for other Schistosoma spp.11,12 The IB uses species-specific adult worm microsomes and is used mainly when there is a concern for Schistosoma haematobium or Schistosoma japonicum.12 The FMI is commercially available and used initially for this case with an elevated but indeterminate result. Because a high clinical suspicion for Schistosoma infection remained, samples were sent to the CDC for further confirmatory testing. The CDC performed the FAST ELISA test and IB, both of which were positive for Schistosoma mansoni only. To definitively make a diagnosis of CNS schistosomiasis, a brain or spinal cord biopsy is required and hematoxylin and eosin staining will show a Schistosoma granuloma with ova and a refractile shell surrounded by fibroblasts, eosinophils, and macrophages.13 We did not pursue surgical confirmation because of Mr. M’s rapid improvement with praziquantel and the high morbidity associated with the procedure.

Although established treatment regimens exist for more common manifestations of systemic schistosomal infection (eg, swimmer’s itch and Katayama fever), there are no consensus guidelines or randomized controlled trials for the treatment of neuroschistosomiasis. Regimens have been established based on anecdotal evidence and expert opinion that combine antiparasitics, corticosteroids, and surgery with minimally metabolized seizure medications when needed.1,7,8 Praziquantel is the antiparasitic of choice for schistosomiasis because of a reported cure rate of 70% to 90% for parasitic infections.7 Dosing regimens vary from 40 to 60 mg/kg/day given in divided doses and treatment duration varies widely from 1 to 14 days. After review of several case reports published in the literature,6,14-17 few of which listed the dose and duration of therapy used, we chose a moderately aggressive regimen of 5 days of praziquantel at 50 mg / kg based on a case with good neurologic recovery.6 This case highlights the importance of publishing the duration and dose of praziquantel used as well as clinical outcome achieved, because there is a paucity of information in the published literature.

In addition to praziquantel, steroids are typically administered. The role of steroids in CNS schistosomiasis is multifactorial. In animal models, steroids have been shown to decrease the size of granulomas. Steroids also decrease the inflammatory reaction that results from the death of the adult worms and can worsen neurologic symptoms.14 Steroid dosing and duration varies widely. For our case, we chose 7 days of IV methylprednisolone 15 mg/kg followed by a 4-week prednisone taper, again based on reported regimens outlined in other case reports. Surgery is typically reserved for people with neuroschistosomiasis who have severe neurologic symptoms and evidence of CSF flow obstruction.1

Neuroschistosomiasis is a rare but serious cause of treatable neurologic disability. Although typically it is seen only in endemic areas, more cases are being reported in the developed world, presumably due to increased global travel and emigration from endemic areas. Among the most important features of this case was the remarkable functional recovery by the patient with minimal-to-no residual disability. This is rarely reported in the scant available literature, with only 2 known cases of similar recovery,3,4 and most cases resulting in at least some degree of permanent paraparesis and bowel or bladder dysfunction. Although neuroschistosomiasis is exceedingly rare in the US (and outside endemic areas in general), Schistosoma infection should always be considered in patients with the proper exposure history and associated neurologic symptoms. Prompt recognition and initiation of appropriate treatment are critical to improving clinical outcomes and minimizing permanent neurologic sequelae.

9. Chen MG. Progress in the assessment of morbidity due to Schistosoma haematobium infections: a review of the recent literature. Trop. Dis. Bull. 1989;48:2643-2648.