Autoimmune myasthenia gravis (MG) is an antibody-mediated disorder that impairs neuromuscular transmission. Despite existing symptomatic, immunomodulatory, and immunosuppressive therapies, significant unmet needs in MG treatment remain. Treatment could be more targeted, effective, and rapid in onset of benefit with fewer side effects and logistic challenges. Novel drugs may address these limitations. This article reviews practical aspects of using emerging therapies in MG and reviews drugs in the pipeline (Table). 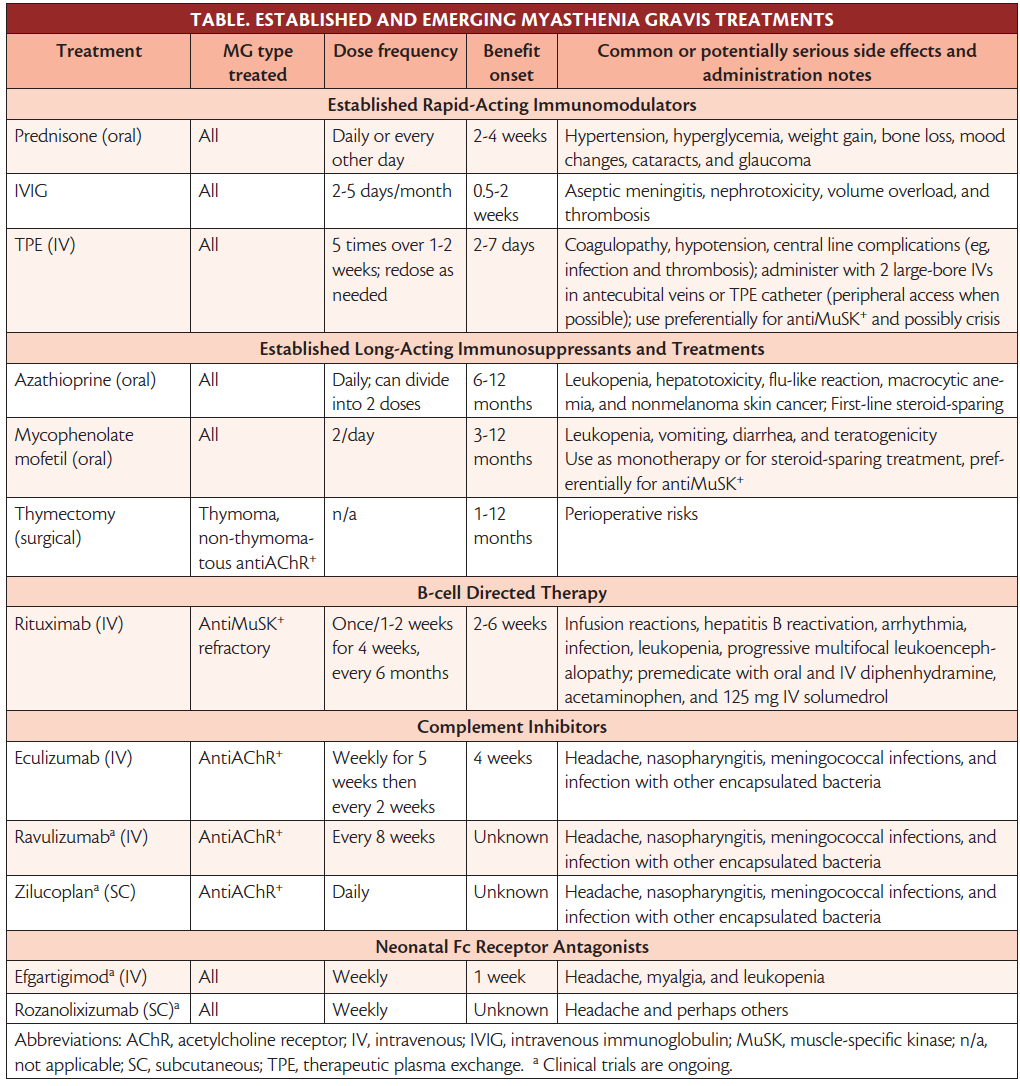 The pathophysiology of MG directly informs treatment strategies. Most people with generalized MG (gMG) produce antibodies against the postsynaptic acetylcholine receptor (AChR). AntiAChR antibodies are IgG1 and IgG3 subtypes and disrupt neuromuscular transmission by several mechanisms, including complement activation.1 In those who have MG without antiAChR, up to 40% have antibodies against muscle-specific kinase (MuSK), which mediates AChR clustering.2 AntiMuSK antibodies are IgG4 and do not activate complement. B cells, which differentiate into the plasma cells and plasmablasts that secrete pathogenic autoantibodies, are dysregulated in both antiAChR+ and antiMuSK+ subtypes.3

For AChR+ MG, the complement pathway is a new drug target. After antibodies bind to postsynaptic AChRs, the C1 complex can bind, triggering a cascade of enzymatic reactions that ultimately forms a membrane attack complex (MAC). The MAC causes focal simplification and lysis of the postsynaptic membrane. Eculizumab and other complement inhibitors block the cleavage of the C5 protein in this pathway, preventing MAC formation (Figure). 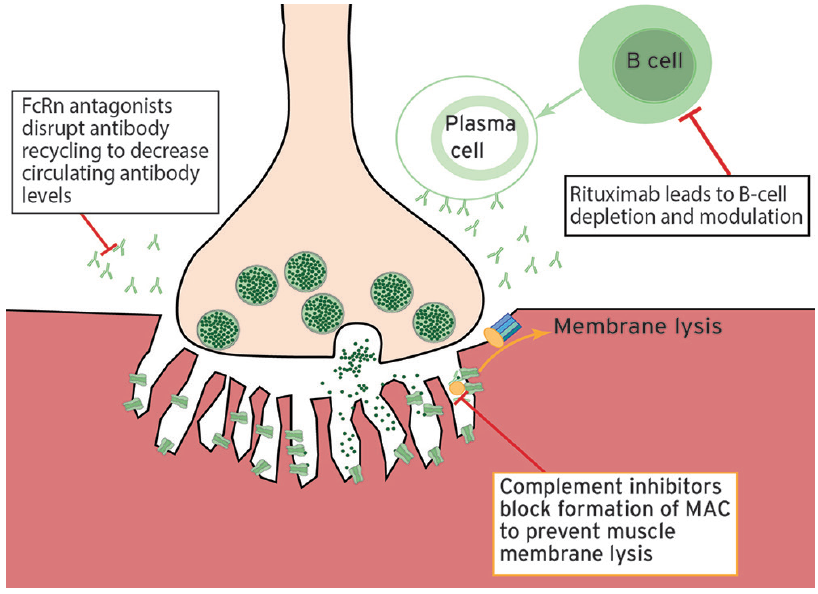 Figure. In myasthenia gravis, antibodies to the acetylcholine receptor (AChR) are bound by complement, which forms a membrane attack complex (MAC). The MAC causes an influx of fluid and celll-membrane lysis. Next-generation treatments act to reduce antibodies by B-cell depletion and modulation (rituximab) or via reduced antibody recycling by the neonatal Fc receptor (FcRn) or inhibit complement (eculizumab) to reduce MAC formation.

Eculizumab. Eculizumab is a humanized monoclonal antibody that was approved by the Food and Drug Administration (FDA) for treatment of antiAChR+ gMG in 2017 based on a clinical trial that evaluated eculizumab as maintenance therapy for refractory gMG.4 Our current practice is to consider eculizumab for people who mirror the clinical trial study population. These individuals generally have 1) moderate to severe generalized antiAChR+ MG and 2) inadequate benefit for unacceptable side effects from 2 disease-modifying therapies (ie, prednisone and an immunosuppressive therapy [IST]); or 3) require maintenance intravenous immunoglobulin (IVIG) or therapeutic plasma exchange (TPE). Because there is a rapid onset of benefit, we also sometimes use eculizumab as bridge therapy while awaiting the therapeutic effects of thymectomy or ISTs.

Eculizumab appears to be generally safe and well tolerated in MG. In the clinical trial and the open-label extension, the most common side effects were headache and nasopharyngitis.4,5 Because complement is essential in fighting Neisseria meningitidis and other encapsulated bacteria, eculizumab increases the risk of meningococcal infection, including meningitis. Vaccination reduces risk but is not a failsafe prophylactic. To our knowledge, only 1 person taking eculizumab for MG to date has developed meningococcal infection, which resolved with antibiotic treatment.5 Real-world safety data have not yet been published.

Meningococcal vaccination is necessary at least 2 weeks before starting eculizumab. If MG is life-threatening and no alternative exists, patients can receive drugs sooner, but require antibiotic prophylaxis. The Centers for Disease Control (CDC) provide recommendations for meningococcal vaccination.6 Both the quadrivalent MenACWY and MenB vaccines are given and can be coadministered. The MenACWY vaccine is given as 1 injection, with a booster every 5 years for the duration of complement inhibitor therapy. The MenB vaccine is a series of 2 or 3 doses depending on the brand used. Because the MenB brands are not interchangeable, it is important to complete the MenB vaccination series with the same vaccine brand. In our experience, reminders are needed to ensure the completion of follow-up MenB doses.

Patients starting eculizumab are often on other immunomodulatory treatments. For those receiving maintenance TPE, a supplemental eculizumab dose is required with each TPE session. Typically, IVIG is discontinued because of concerns about reduced eculizumab efficacy and increased risk of thrombosis and renal injury with the combined protein load. Long-term ISTs are continued, and the potential for weaning to the minimum number of therapies is considered.

Eculizumab dosing begins with an induction phase of 900 mg weekly for 4 weeks and 1,200 mg at week 5. This is followed by maintenance dosing of 1,200 mg every 2 weeks. We perform the induction series in an infusion center. If tolerated, maintenance therapy can be given at home if covered by insurance. There are no specific monitoring labs or premedications. Eculizumab is a 35-minute intravenous infusion and treated individuals are observed for 60 minutes after infusion.

The optimal duration of eculizumab treatment for MG is unknown. In people who do not benefit by 12 weeks, discontinuation is often reasonable, although later response is possible. For those who respond, there is no data to guide when or how to stop or taper eculizumab. In the phase 2 trial, participants who stopped therapy without a taper did not sustain the same magnitude of benefit.7 In those who receive eculizumab as a bridge therapy, it may be reasonable to stop or taper infusions after other ISTs take effect. Longer dosing intervals or lower doses of maintenance eculizumab have not been studied in MG to our knowledge.

Cost per individual and the MG population is a consideration in eculizumab use, especially for patients on maintenance therapy. Eculizumab is currently the most expensive treatment for MG, costing over $60,000 per month in the US. Whether reductions in multidrug regimens and MG-related hospitalizations will offset eculizumab costs has not been studied.

Other Complement Inhibitors. There are 2 other complement inhibitors in development, which may reduce the logistic burden of bimonthly eculizumab infusions. Ravulizumab is a longer acting intravenous complement inhibitor given every 8 weeks being studied in a phase 3 triala for MG. Zilucoplan is a subcutaneous formulation administered daily, currently being studied in a phase 3 trialb for antiAChR+ gMG after a recent phase 2 trial demonstrated safety and tolerability.8

Neonatal Fc receptor (FcRn) antagonists are another novel and promising class of drugs for MG. Normally IgG binds FcRn, which is expressed on endothelial cells and protects IgG from degradation. This protection recycles IgG to maintain circulating levels. Antagonists of FcRn prevent binding of IgG and thereby increase degradation (Figure). Depletion of IgG is the well-established therapeutic mechanism of TPE in MG.9 Because TPE is not widely available and is often limited by intravenous access issues, however, FcRn antagonists may provide a safer and more convenient alternative. All IgG subclasses are decreased by FcRn antagonists, suggesting these could have broad applications in antiAChR+, antiMuSK+, and seronegative MG, as well as other antibody-mediated diseases.

There are 4 FcRn antagonists in clinical trials for use in MG. Efgartigimod and nipocalimab (MOM-281) are intravenous formulations; rozanolixizumab and RVT-1401 are subcutaneous injections.c-f Efgartigimod and rozanolixizumab were safe and well tolerated in phase 2 studies, with secondary efficacy analyses showing improvements in validated MG scales as early as 1 week into treatment.10,11 Headache was a notable side effect of rozanolixizumab.11 If phase 3 trials demonstrate the safety and efficacy of FcRn antagonists, the rapid onset of these drugs could make them attractive options for rescue or bridge therapy. The resource intensity, potential costs, and unknown long-term safety of IgG depletion are all considerations for the potential use of FcRn antagonists as maintenance therapies.

Rituximab. Rituximab is a monoclonal antibody that binds to CD20 on circulating B cells, leading to cell death via multiple mechanisms (Figure). Rituximab-induced depletion of B cells leads to reduced autoantibody production and B-cell modulation. Although the FDA has not approved MG as an indication for rituximab use, efficacy for treatment of antiMuSK+ MG has been robustly demonstrated.12 Rituximab is also effective in some patients with antiAChR+ and seronegative MG.13

Rituximab is typically safe and well tolerated. Common side effects include headache, nausea, diarrhea, pruritus, and flushing; serious side effects can occur (Table). Infusions must be given with premedication and in treatment centers with medical personnel available, because severe and rarely fatal infusion reactions can occur, most often during the first infusion.

Before initiating treatment, we check hepatitis B (core antibody, surface antibody and antigen), hepatitis C, and tuberculosis serologies. People with history of hepatitis B infection should consult with a hepatologist or infectious disease specialist to discuss the safety of rituximab, risk of viral reactivation, and the use of antiviral therapy during treatment. Prior exposure to hepatitis C or tuberculosis is not a contraindication but should be evaluated. Given the risk of cytopenia, we check complete blood counts before initiation and at 6 months, before redosing. Rituximab can decrease the efficacy of vaccines so routine, but not live, vaccinations should be given at least 4 weeks before treatment, if possible.

Although each rituximab infusion is several hours long, the infrequent dosing schedule—4 to 8 times per year—is often appreciated. There are 2 dosing regimens. The first is an infusion of 375 mg/m2 weekly for 4 consecutive weeks (body surface area dosing). The second is 2 infusions of 1 g given 2 weeks apart (flat dosing). We typically use flat dosing unless it differs greatly from body surface area dosing. Premedications include acetaminophen, oral and intravenous diphenhydramine, and intravenous methylprednisolone 125 mg.

Depletion of B cells and the beneficial effect of rituximab typically lasts for 4 to 9 months in MG but may persist for a longer time.14 Redosing is done at 6-month or longer intervals based on clinical symptoms. Maintenance dosing can be lower than the initial 2-g load (ie, 1 g every 6-12 months). Because recovery of CD19/CD20+ cell counts does not correlate with relapse, we do not routinely measure B-cell subsets, although infrequently we use them to guide retreatment.13

Other B-Cell Targeted Therapies. Therapies with different mechanisms of B-cell targeting are in development for use in MG. Iscalimab is a monoclonal antibody that binds to CD40 (expressed on B-cells) that prevents B-cell activation. A phase 2 trial of iscalimab in antiAChR+ and antiMuSK+ MG has completed, although results are not yet published.g The B-cell activating factor (BAFF) is another proposed drug target. Belimumab was the first BAFF-inhibitor studied in MG but was not found to have benefit relative to placebo in a phase 2 trial.15 Plasma-cell depleting drugs currently used in multiple myeloma are also being considered for use in MG.

Complement inhibitors, FcRn receptor antagonists, and B-cell directed therapies are the next generation of treatments for MG. These drugs will address some unmet needs in MG treatment but do not replace existing corticosteroid, immunomodulatory, and immunosuppressive therapies at this time. Newer therapies are often added to steroids and ISTs, which can be subsequently weaned. Systems of MG care will need to evolve concurrently to make these novel treatments available to patients and to monitor real-world comparative efficacy, safety, and costs. With a growing list of new therapeutic options, biomarker development for tailoring and monitoring therapy will be crucial in optimizing patient care with potentially more targeted therapies.

b. Safety, tolerability, and efficacy of zilucoplan in subjects with generalized myasthenia gravis (RAISE) (NCT04115293)

d A study to evaluate the safety, tolerability, efficacy, pharmacokinetics and pharmacodynamics of M281 administered to adults with generalized myasthenia gravis (NCT03772587)