Some cardiac workup is a necessary part of headache evaluation to assess for secondary headache and potential risks of available headache treatments.

Cardiovascular disease is an important consideration in people with migraine. The connection between migraine (with or without aura) and cardiovascular disease, including stroke, has been established.1 There is increasing evidence that migraine may be a risk factor for myocardial infarction (MI). Migraine is considered a predictor of cardiovascular disease in the QRISK3 algorithm.2,3 As a result, health care providers who treat headache exercise caution when prescribing triptans to individuals with a history of stroke and heart attack as well as those with uncontrolled hypertension and diabetes. Less is known about headache as a manifestation of a cardiovascular event. Cardiac cephalalgia (CC) is a rare secondary headache disorder, occurring with myocardial ischemia and relieved with nitroglycerin. The Table provides the definition and diagnostic criteria from the International Classification of Headache Disorders-3 (ICHD3).4 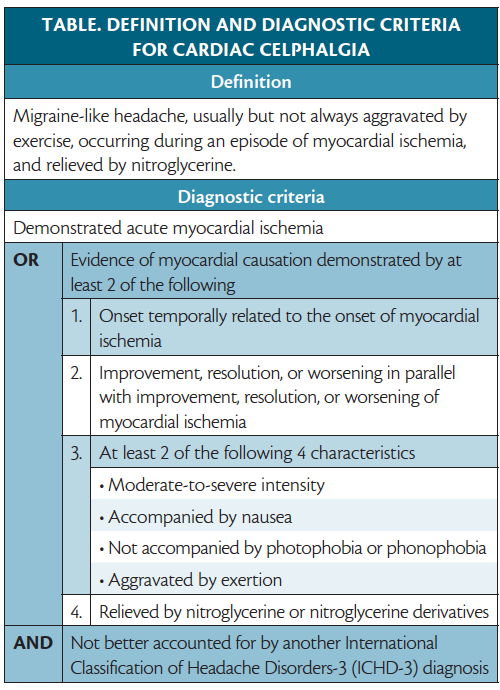 Headache with chest pain unrelated to cardiovascular disease has also been reported in a case study.9 In this case, a woman, age 22, with a history of migraine with and without aura presented with chest pain and left arm tingling. The chest pain could last for longer than 1 hour and was unrelated to exertion or stress. Extensive cardiac and neurologic workup were unrevealing, and it was thought that her chest pain was thoracalgia—a manifestation of migraine—because of the temporal association with left arm tingling. She had full resolution of chest pain with topiramate.

Headache features of CC are variable and may or may not be accompanied by chest pain. The pain of CC may occur in any part of the head and the onset may be acute, subacute, or intermittent.5 Pain can last from minutes to hours and most commonly is described as severe and occurring with exertion. A misdiagnosis of migraine is frequent because migraine and CC have shared features. Because migraine and CC are treated in distinctly different ways, it is imperative to differentiate between them. The goal of this review is to increase awareness of the need to include CC in the differential diagnosis of migraine and review treatment options for the condition.

Although it is common to exercise caution when treating headache in individuals with a history of cardiovascular events, evaluating for underlying cardiac disease in those presenting with headache is less frequent. See the Red Flag List for Cardiac Cephalgia for the warning signs. First described as a separate entity in 1997, CC is a treatable form of exertional headache.10 In the first report, 2 individuals were described who both had a history of exertional headache starting after 5 to 15 minutes of aerobic exercise over a period of several months. Both reported pain severity of 10 on a scale of 1 to 10 and described the pain as a bifrontal squeezing pressure and sharp/shooting pain that resolved over minutes to an hour after exercise. One individual reported nausea but no other migrainous features such as photophobia, phonophobia, vomiting, or aura. Both had a history of tobacco use and 1 had hypertension. No other vascular risk factors were reported, although both were found to have coronary artery disease (CAD), which was treated. After treatment of CAD, both had resolution of their exertional headaches. In another case report a man, age 64, with a history of migraine with and without aura presented with a new severe nonexertional headaches without chest pain that had been occurring over a 6-month period. An electrocardiogram (ECG) performed during an attack, confirmed ST elevation in the inferior leads, which was not seen in the absence of headache. Coronary angiography confirmed a right coronary artery (RCA) stenosis. After stenting of the RCA and medical optimization with aspirin, clopidogrel, statin, and blood pressure medications, the headaches resolved.11 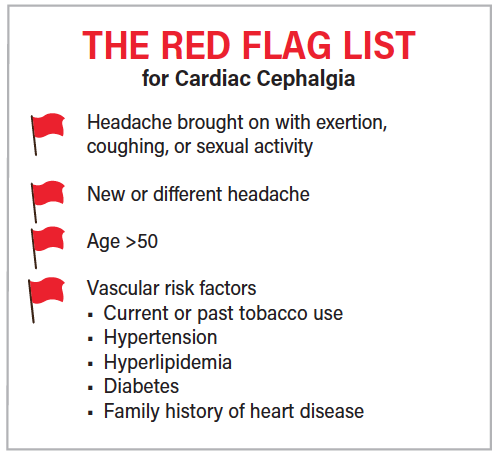 Before diagnosing CC, secondary causes of headache must be considered. Usually, CC presents with a headache that worsens with exercise and improves with rest or nitroglycerin. Not all cases of CC occur on exertion, however, and with chest pain, neurologists should review each individual’s vascular risk factors and consider the diagnosis when necessary. Although CC is rare, the presence of any items on the Red Flag List for Cardiac Cephalgia should prompt a neurovascular workup that includes brain MRI and imaging of brain arteries, ECG, a nitroglycerin trial, and a possible cardiology consultation. Lumbar puncture and analysis of the cerebrospinal fluid (CSF) may also be considered to rule out conditions, such as subarachnoid hemorrhage (SAH) or meningitis/encephalitis. Continuous cardiac monitoring, an exercise tolerance test, a dobutamine stress echo, and a nuclear stress test may be considered with a cardiologist to look for changes during a headache attack.11 The diagnosis is confirmed if the recommended treatment of an underlying cardiac condition results in headache resolution.

Often, CC is misdiagnosed as migraine. Case reports have shown that people can carry an underlying diagnosis of CC for many years and then have an acute MI.12 It is also essential to differentiate CC from migraine because certain migraine preventive and abortive medications should be avoided in these cases. Triptans should be avoided in people with MI, stroke, uncontrolled hyper-tension and uncontrolled diabetes. Tricyclic antidepressants, selective serotonin reuptake inhibitors (SSRIs) and selective serotonin-norepinephrine reuptake inhibitors (SNRIs) can increase blood pressure and should be used with caution. Nitroglycerin causes vasodilation and in turn, worsens migraine and should be avoided in this population. Team-based care that includes neurology and cardiology can ensure prompt diagnostic testing and confirmation. A detailed history and physical and appropriate diagnostic studies are imperative in diagnosing CC because treatment can reduce morbidity and mortality.

CC is a rare secondary headache disorder that occurs with MI. By its definition, the headache resolves with appropriate medical, interventional, or surgical therapy for CAD. Most commonly, the headaches are severe, are triggered by exertion, coughing, or sexual activity and can be associated with nausea. Early diagnosis of CC can prevent a potentially fatal MI. Studies have shown that patients with migraine, especially women, have an increased risk of cardiovascular events including nonfatal MI, coronary revascularization procedures or stroke.13 Headache specialists and neurologists may need to regularly include some cardiac workup as a part of headache evaluations either to risk-stratify for safe migraine abortive and preventive treatments or to correctly diagnose a patient with a secondary headache disorder such as CC rather than a primary headache disorder.

DEK reports no disclosures related to this article