It is well known that stroke is among the most common causes of disability in adults. Less well recognized, however, is how common psychiatric disorders are after stroke.

According to the American Heart Association and American Stroke Association, poststroke depression affects approximately one-third of people after they have a stroke,1 with a peak incidence 3 to 6 months after stroke. A significant proportion of individuals with poststroke depression are undiagnosed or inadequately treated. Unfortunately, unrecognized psychiatric disorders are associated with a variety of poor outcomes, including but not limited to higher rates of mortality, long-term disability, hospital readmissions, and use of outpatient services.

The presumed pathophysiology of poststroke psychiatric disorders is complex, likely involving both biologic and environmental factors.1 Risk factors may include stroke severity (eg, whether there are impairments to activities of daily living, cognitive impairment, or social functioning, which can all be affected by aphasia when present. Other risk factors are genetics, previous history of depression and/or anxiety, and certain medications. In contrast, age and sex do not appear to be risk factors, nor is lesion location. Differences in study techniques regarding these factors limit generalizability to the population as a whole, and more research is needed.1

Regardless of risk factors, some guidelines, such as the Canadian Stroke Best Practice Recommendations2 recommend that all persons who had a stroke be screened for depressive symptoms. The reasoning for this recommendation is the high prevalence of depression poststroke, a need for screening to detect depression, and strong evidence for the benefits of treating poststroke depression. Screening should be done with a validated tool and may take place at various stages throughout the continuum of stroke care, particularly at transition points (eg, transfer from an inpatient acute setting to a rehabilitation setting, before return to the community, and at follow-up appointments). The single question “Do you often feel sad or depressed?”, derived from the Personal Health Questionnaire (PHQ)-2, has a sensitivity of 86% and specificity of 78% for depression.3 When a person answers this question positively, further evaluation with the PHQ-9 should be done. For those with cognitive and/or communication impairments, other screening tools (eg, the Visual Analogue Mood Scale or Aphasia Depression Rating Scale) may be considered.

There is no definitive evidence to guide the specific choice of therapy for people with poststroke depression.1,4 Selective serotonin reuptake inhibitors (SSRIs) are commonly used as first-line treatment based on data extrapolated from the general population. Because SSRIs increase the risk of bleeding, however, they are contraindicated after a hemorrhagic stroke. If effective, SSRIs should be continued for 6 to 12 months. Potential side effects of SSRIs may include cardiovascular effects bleeding, interactions with other medications, falls, hyponatremia, and gastrointestinal disturbances, among others (Table). 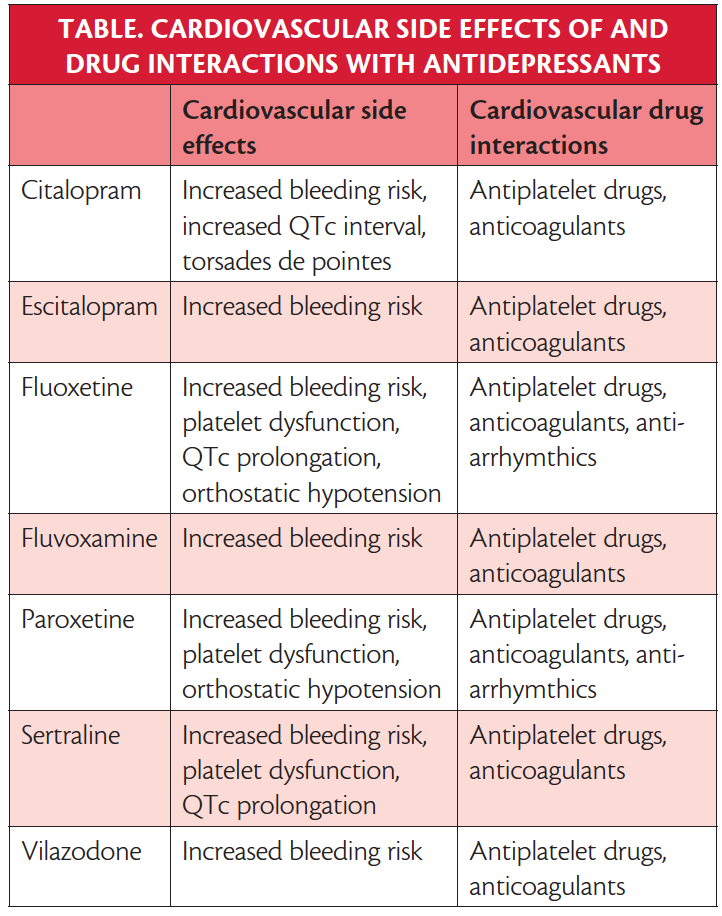 Cognitive behavioral therapy (CBT) may or may not be useful for poststroke depression. Often used as a supplementary treatment to reduce feelings of helplessness, CBT targets thoughts and behaviors to improve mood. With CBT, practice focuses on increasing pleasurable activities, reducing negative thoughts, and improving assertiveness and problem-solving skills. Drawbacks include higher costs and the necessity of increased time and staff expertise. There are CBT programs specifically designed for poststroke depression (ie, the CALM trial in the United Kingdom8 or the Brainstorm program in Australia.9 For the communication-impaired, guided CBT self-help workbooks, therapists with education in art or music therapy, and mindfulness may be helpful. As adjustment issues emerge, CBT may become more effective.

A variety of other mood disorders can also occur more commonly after stroke.

Poststroke anxiety affects approximately 20% of patients following stroke. Risk factors include comorbid poststroke depression and younger age. The HADS is a common screening tool. The SSRIs are first-line treatment, with data largely generalized from that used for generalized anxiety disorder. Psychotherapy also sometimes used. Weighing the benefit-to-risk ratio is important as there is no clear evidence-based data solely from the stroke population.

Posttraumatic stress disorder (PTSD) is also thought to affect 20% of people after stroke, and is associated with an increased risk for medication nonadherence.13 The American Psychiatric Association’s Diagnostic and Statistical Manual of Mental Disorders, 5th edition (DSM-5) defines PTSD as a “trauma and stressor-related disorder,” comprised of 4 core areas: intrusive thoughts, avoidance of triggering stimuli, negative alterations in mood and cognition, and hyperarousal.14 There have not yet been any controlled trials examining the efficacy of pharmacologic or psychotherapeutic interventions for poststroke PTSD.

Poststroke anger proneness has been shown to affect up to 33% of people after stroke, both acutely and in the later periods following a stroke.15 Individuals can become irritable, impulsive, and hostile after stroke. They may show more aggressive behaviors including hurting others, or negative verbal behavior such as cursing or screaming, all of which can continue for years. A Cochrane review found weak evidence, based on a few small randomized controlled trials, that beta-blockers can improve aggression after acquired brain injury, but very large doses were used that are likely to produce significant adverse effects.15 For other classes of medication, randomized controlled trials have not been published, but there is reasonable anecdotal evidence (eg, case series reports) that antipsychotics, mood stabilizers, and antidepressants may also be effective.15

Poststroke emotionalism can involve easily provoked outbursts of laughter or tearfulness inappropriate to a situation with difficulty showing appropriate emotions at other times. Risk factors may include cognitive deficits and anterior lesions.16 Dextromethorphan/quinidine is approved by the Food and Drug Administration (FDA) for management of emotionalism. Tricyclic antidepressants (TCAs) and SSRIs may also be helpful as treatment, although this use is not in the FDA-approved indications.

In conclusion, poststroke mood disorders are common, disabling, underrecognized, and undertreated. Patients with these disorders are at higher risk for suboptimal recovery, recurrent vascular events, poor quality of life and mortality. More evidence-based research is required regarding optimal management. Future studies should examine pathophysiology, including relative contributions of biologic vs psychosocial factors. Large, multicenter, international randomized controlled trials should be conducted to identify safe and effective treatments for these disorders, and assess risks and benefits of routine screening to determine optimal timing, frequency, setting, and methods for diagnosis.

Adults Under Age 45 Are Not Aware of Common Stroke Symptoms