Hyperammonemia is a neurologic emergency that can cause cerebral edema, intracranial pressure crises, and seizures.

Mr. L, age 63, who is of Ashkenazi Jewish decent with a history of hypertension presented with 2 days of increasing confusion. He was evaluated at an outside hospital emergency department and discharged after a basic metabolic panel, complete blood count (CBC), troponin test, ECG, and head CT were unrevealing. After discharge, Mr. L became progressively more confused, unable to complete simple tasks, and developed decreased appetite, ataxia, and fatigue. On arrival to our hospital, he had blood pressure of 166/88 mm Hg, heart rate 120 bpm, a temperature of 37.7 Cº, and was saturating, 95% on room air. Mr. L was awake, with a poor attention span and confusion to place and time. He was perseverating with a flapping hand tremor. No focal weakness was identified.

Laboratory findings from a basic metabolic panel and CBC were again unremarkable; however, Mr. L’s ammonia level was elevated at 414 mcg/dL. Salicylate and acetaminophen levels were undetectable, and a urine drug screen was negative. Liver-function tests and hepatitis serologies were unremarkable. Infectious work up including urinalysis was negative.

Lactulose treatment was initiated for hyperammonemia, and Mr. L was admitted to the medicine floor. He had progressive decline of his mental status over the next 24 hours, requiring intubation for airway protection. He developed eye deviation with rhythmic blinking and facial twitching concerning for seizure activity that resolved after treatment with levetiracetam and propofol.

Noncontrast head CT and CTA of the head and neck were unremarkable on the day of admission. Head CT was repeated after seizure activity developed and showed sulcal effacement and loss of grey white differentiation, concerning for cerebral edema. A brain MRI showed diffusion restriction in the insular, cingulate, frontal, temporal, and parietal cortices (Figure 1). Mr. L’s EEG was notable for diffuse slowing while being treated with propofol; no epileptiform discharges were seen.

Figure 1. Axial diffusion-weighted MRI sequences with diffuse bilateral diffusion restriction of the cortex, including the insular and cingulate cortices.

The most common cause of hyperammonemia is liver failure. However, in the absence of liver failure, nonhepatic causes of hyperammonemia were evaluated. Hyperammonemia is caused by either increased production or decreased elimination of ammonia via the liver. The differential diagnosis for nonhepatic hyperammonemia with increased nitrogen turnover includes infection with urease producing bacteria (eg, Proteus spp, Providencia spp, or Klebsiella spp), increased dietary protein load, steroids, and increased catabolism from trauma or surgery. Conditions that decrease ammonia elimination include portosystemic shunting, drugs (eg, valproate), and late-onset inborn errors of metabolism. A complete history and review of systems with Mr. L’s spouse revealed an abnormally high intake of Pacific razor clams at the family’s cabin 1 day before symptom onset. There was no history of recent surgery, infection, or prescription drug use associated with hyperammonemia. There was high clinical suspicion for high protein intake unmasking a late-onset urea cycle disorder. Additional errors of metabolism such as organic acidemias, fatty acid oxidation defects, and amino acid transport defects were considered less likely because of the absence of acidosis and ketosis.1 Plasma amino acid and urine organic acid levels were ordered.

Mr. L’s serial ammonia levels continued to rise, peaking at 949 mcg/dL, which necessitated treatment with ammonia scavengers sodium phenylacetate/sodium benzoate, hemodialysis, and supplementation with urea cycle intermediates L-arginine and L-carnitine. Ammonia levels rapidly decreased (Figure 2). Initially, Mr. L had a nil by mouth (NPO) status; however, to prevent starvation and worsening catabolism, a lipid-rich protein-free diet was started. Protein (0.5 g/kg/day) was gradually reintroduced to his diet. A cerebral pressure monitor was placed because of concern for a intracranial pressure (ICP) crisis and coma. Medical management of ICP was initiated with sedation, seizure prophylaxis, hyperosmolar therapy, and mild hypothermia to 36 Cº for 24 hours. Mr. L’s initial ICP was 16 mm Hg, and he had 2 episodes of ICP crisis (ICP >25 mm Hg for >2 minutes), necessitating midazolam infusion in addition to the ongoing propofol infusion. The ICP crisis resolved with resolution of hyperammonemia. Extubation occurred on the sixth day of Mr. L’s hospital stay, and he began to follow commands on day 8. He had residual severe cognitive slowing with dysarthria. Aggressive physical, occupational, and speech therapy improved his physical strength and verbal communication. He was discharged to rehabilitation on day 19 with orders for a low protein diet, oral sodium benzoate and levocarnitine. 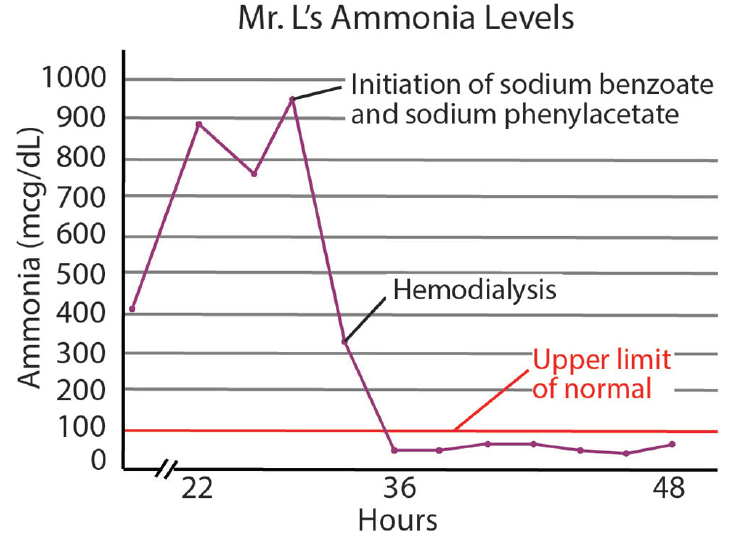 A year after admission, Mr. L remains on low dose sodium benzoate, levocarnitine, and arginine supplementation. He continues adhering to a low protein diet of 1 g/kg/day, has recovered to independent living, and gone back to work. He notes some occasional word finding difficulties and mild cognitive impairment. Outpatient genetic testing was positive for ornithine transcarbamylase deficiency (OTCD).

Ornithine transcarbamylase deficiency (OTCD) is the most common urea cycle disorder with an incidence of 1:42,000 persons.2 It is characterized by the complete or partial inability to breakdown ammonia in the liver. As an X-linked disorder, OTCD largely affects males, however heterozygotic women may manifest symptoms because of X-inactivation (lyonization).3 Although the disorder normally presents during the newborn period, late-onset presentations can be unmasked by increased nitrogen turnover in the setting of impaired enzyme activity. Late-onset presentations often go unrecognized because of their rarity and protean manifestations. The majority of cases are fatal.4,5

The clinical presentation depends on the degree of enzyme impairment. Often adults become autoselected vegetarians, noting undesirable side effects with meat products.4 In this case, Mr. L ate meat regularly and had no prior episodes of encephalopathy associated with protein intake. Symptoms of hyperammonemia range from headache, nausea, vomiting, fatigue and confusion, to seizure activity.5 Physical exam findings include encephalopathy, asterixis, ataxia, and in severe cases, coma.

Plasma amino acids and urine organic acids can help differentiate between causes of urea cycle disorders. The classic laboratory findings in OTCD include low plasma citrulline and increased urine orotic acid. Unfortunately, in Mr. L’s case, labs were drawn after hemodialysis and initiation of treatment, making the results nondiagnostic. Genetic analysis of his ornithine transcarbamylase gene was notable for a missense mutation in exon 5, c.477T>G, isoleucine-to-methionine substitution on codon 159.

This is the second presentation of this mutation, previously reported in an Ashkenazi Jewish man, age 47.6 Familial testing revealed the same mutation for Mr. L’s brother and 2 grandsons. Over 340 mutations of the ornithine transcarbamylase gene have been found with wide phenotypic heterogeneity that is likely caused by combination of genetic and environmental factors. Individuals with partial enzyme deficiency usually have single-base mutations.6 Based on clinical history, genetic testing, and literature review it was concluded that Mr. L’s large consumption of high-protein Pacific razor clams led to his hyperammonemic crisis, which unmasked his urea cycle disorder.

Imaging is characterized by extensive cortical involvement including a predilection for the insular and cingulate cortex.10,11 Cortical changes are potentially reversible, but can result in varying degrees of atrophy of the insular and cingulate cortex.5 The degree and duration of hyperammonemia may be reflected in the severity of imaging findings.

This case highlights the need for a high level of clinical suspicion and expanded work up for hyperammonemia in the absence of liver disease. Many cases of late onset OTCD are fatal due to delayed treatment. Treatment is focused on elimination of excess ammonia, replacing intermediates of the urea cycle, managing cerebral edema, and dietary protein restriction. Prompt recognition and aggressive treatment portend a good outcome.

AM reports no disclosures.

Phase 3 Trial of Ganaxalone for Refractory Status Epilepticus Being Initiated