Transthyretin familial amyloid polyneuropathy (TTR-FAP) is an autosomal dominant genetic disorder caused by transthyretin (TTR) gene mutations that can lead to detrimental involvement of the peripheral and autonomic nervous systems and the cardiovascular system. Manifestations of TTR-FAP are caused by extracellular deposition of misfolded proteins, which aggregate into amyloid fibrils, resulting in cytotoxicity and tissue damage.1 More than 120 pathogenic TTR mutations that have been reported worldwide.2 There is a known spectrum of genotypic-phenotypic correlations that defines the most prominent clinical manifestations.

Familial amyloid polyneuropathies (FAPs) include hereditary transthyretin amyloidosis (hTTR), apolipoprotein A1-related FAP and gelsolin-related FAP. This review focuses on TTR-FAP or hereditary ATTR (hATTR). The genotype-phenotype spectrum of hATTR has been well-described via genetic testing advances and can help predict clinical manifestations, which vary with penetrance.

Globally, the most common TTR gene mutation is Val30Met with a frequency of 1:538 in Portugal and 1:100,000 to 1:1,000,000 in the US,3 which typically presents with early onset neurologic symptoms and is classified as early- or late-onset. The early-onset form often occurs in endemic regions, including Portugal and Japan, with high penetrance and onset before age 50. Clinical symptoms include paresthesias, burning pain, dysesthesias, and dysautonomia including impotence, diarrhea, or constipation.4 In addition to carpal tunnel syndrome (CTS), an axonal sensorimotor neuropathy is often seen on electrodiagnostic testing. Cardiac conduction defects may occur, requiring a pacemaker. Late-onset Val30Met disease, often found in nonendemic areas and Sweden, is associated with onset after age 60 and low penetrance. Individuals with late-onset disease often have no family history of amyloidosis. Late-onset disease is associated with loss of sensation, mild autonomic dysfunction, and male predominance. Cardiomyopathy occurs commonly in late-onset disease.2

Some TTR mutations primarily affect the heart (eg, Ser50Ile, Thr60Ala, Ile68Leu, and Leu111Met). Congestive heart failure, arrhythmias, and conduction blocks occur, and a pacemaker or implantable cardioverter-defibrillator may be needed.

Apolipoprotein A1-related FAP is rare, typically presents in the fourth or fifth decade, and mainly affects the kidneys, liver, and gastrointestinal (GI) tract. However, patients with the GLy26Arg mutation can develop a length-dependent sensorimotor polyneuropathy similar to hATTR.7

Gelsolin-related FAP is also rare and endemic to Finland. Symptoms can manifest in the third or fourth decade of life, typically with a triad of features including cranial and sensory peripheral neuropathy, corneal lattice dystrophy, and cutis laxa, manifesting as inelastic connective tissue that appears as loose skin and skin folds.7 The most commonly affected cranial nerve is the facial nerve. A length-dependent sensory neuropathy may also occur, typically in the fourth or fifth decade.3

Multiple organ systems are affected by TTR-FAP, including cardiac, renal, GI, hepatic, ophthalmologic, and peripheral nervous systems. With respect to neurologic manifestations, axonal sensorimotor polyneuropathy is most common. Sensory symptoms begin symmetrically in the lower extremities and progress to the upper extremities within 4 to 5 years.8 As the condition progresses, there is motor involvement with distal weakness of lower and upper extremities. Difficulty walking begins within a few years of onset. Focal mononeuropathy may occur, typically affecting the median nerve at the wrist with symptoms of CTS. Autonomic neuropathy symptoms may include orthostatic hypotension, gastroparesis, urinary retention, sweating abnormalities, and, rarely, sexual dysfunction. Central nervous symptoms are uncommon except in familial leptomeningeal amyloidosis but may include progressive dementia, ataxia, seizures, or stroke-like episodes. Lumbar spinal stenosis has been associated with amyloidosis caused by the amyloid fibril accumulation in the ligamentum flavum that narrows the central spinal canal.

Cardiac involvement (ie, cardiomyopathy and electric conduction disorders) is the most common nonneurologic manifestation of TTR-FAP. Renal involvement typically involves nephrotic range proteinuria leading to edema and mild azotemia. The GI symptoms can manifest with otherwise unexplained diarrhea, constipation, early satiety, nausea, and vomiting. Hepatomegaly may occur. Ocular manifestations include vitreous opacifications and glaucoma. Proteinuria can develop within 3 to 5 years of neurologic symptom onset. The proteinuria may develop into nephropathy within 2 years.9

People with TTR-FAP often have a length-dependent sensorimotor axonal polyneuropathy with loss of unmyelinated and small myelinated nerve fibers and also CTS. There may be significant axonal loss leading to secondary features of demyelination (eg, slowing of conduction velocities and prolongation of distal latencies), which has been known to be misdiagnosed as chronic inflammatory demyelinating polyneuropathy (CIDP).

High-resolution nerve ultrasound (HRUS) has been proposed for diagnosis of amyloid neuropathy and to guide biopsy site selection, but evidence to date is inconclusive. At this time, the role of HRUS is supportive, but not diagnostic. A small study found no specific pattern of multifocal nerve enlargements in individuals with TTR neuropathy or carriers of the disorder, although the number of abnormal nerves was associated with disease severity.10 A larger study of 33 participants showed nerve size was markedly larger in TTR neuropathy, most prominently at common sites of nerve compression and in proximal nerve segments.11 This pattern is similar to that of diabetic and vasculitic neuropathies, it has been postulated there may be an ischemic pathophysiology. However, based on recent data, magnetic resonance neurography (MRN) may prove a better imaging biomarker for FAP.12

Although HRUS is useful in the diagnosis of CTS, specific findings for amyloidosis-related CTS are lacking.13

Biopsy of Nonneurologic Tissue. Subcutaneous abdominal adipose tissue, gastrointestinal mucosa, or endomyocardial biopsy are used. However, a negative biopsy does not exclude the possibility of TTR-FAP because amyloid deposition can occur in a patchy manner. The likelihood of obtaining a positive test is increased if systemic clinical findings associated with amyloidosis are present compared with peripheral neuropathy alone.14 With Congo red staining and polarized light microscopy, a green birefringence is consistent with amyloid deposition. Further characterization of amyloidosis subtypes can be achieved with mass spectroscopy of the tissue sample.

Nerve Biopsy. The sural nerve is typically chosen for biopsy because it is a superficial sensory nerve. Amyloid fibril deposition can be seen with Congo red staining. Again, because of patchy deposition, a negative biopsy does not excluded amyloidosis diagnosis. Before pursuing a nerve biopsy, it is important to consider potential complications and if biopsy is truly needed to establish a diagnosis. Biopsy complications include poor wound healing, lost sensation in the distribution of the nerve, and possible formation of painful neuromas.

Genetic testing for TTR mutations makes it possible to obtain sequence analysis and identify known pathogenic mutations and novel variants. Genetic evaluation should be pursued to definitively establish the diagnosis and assist with prognostication based on the genotypic-phenotypic spectrum of disease manifestations. Differing genotypes have variable penetrance, which influences an individual’s prognosis.

Production of abnormal TTR occurs mostly in the liver. Tetramers of TTR form, but the expressed mutations cause dissolution into monomers that first misfold and then self-aggregrate to form oligomers. The oligomers also self-aggregate to form amyloid fibrils (Figure). Previously, the only available disease-modifying treatment was a liver transplant, which stops progression of autonomic and peripheral neuropathy but not the ocular and leptomeningeal amyloidosis because of continued TTR synthesis in the retinal and choroid plexi. In some individuals, wild-type TTR deposition also continues in the cardiac tissue after liver transplant.15,16 Further, liver transplantation involves invasive surgical intervention and long-term immune suppression so is not without significant risk.

Figure. Transthyretin (TTR) is synthesized in the liver where it almost immediately forms a tetramer. In familial amyloidopathies (FAPs), mutant tetramers dissolve to create monomers that then misfold and reaggregate first as oligomers and then as fibrils. Treatments targt reduction of TTR producion in the liver and stabilization of tetramers so that dissolution does not occur.

An alternative mechanism for treatment is to stabilize the native TTR tetramer so that fibrils are unable to form (Figure). There are 2 medications that slowed the rate of TTR-FAP progression in clinical trials, diflunisal and tafamidis (Table 1).17-19 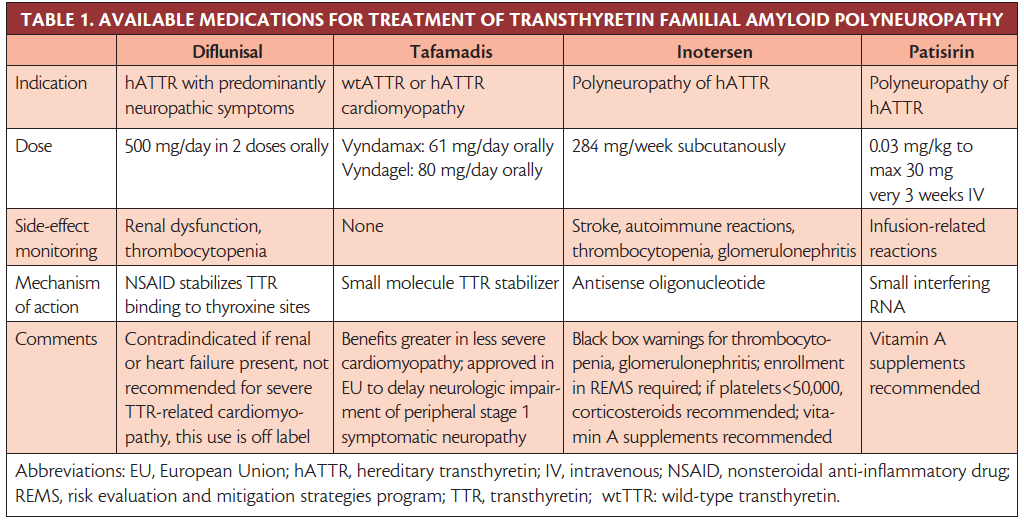 Diflunisal. An oral nonsteroidal anti-inflammatory drug (NSAID), diflunisal slowed neuropathy progression. In a 2-year phase 3 randomized double-blind placebo-controlled study, individuals treated with diflunisal had less deterioration on the Neuropathy Impairment Score (NIS+7) than those treated with placebo (8.7 vs 25 points; P<.001).18 An open-label extension showed sustained benefit with a mean treatment time of approximately 38 months.20 Potential side effects of diflunisal include renal dysfunction and thrombocytopenia, which necessitates laboratory monitoring during treatment.

Tafamidis. Oral tafamidis also stabilizes TTR tetramers. In a phase 2/3 randomized double-blind placebo-controlled trial the efficacy-evaluable participants had significant response to tafamidis,19 and a 12-month open-label extension demonstrated 30 months of tafamidis treatment preserved 55.9% of neurologic function. The phase 3 double-blind placebo-controlled study of tafamidis for patients with hATTR cardiomyopathy demonstrated reductions in all-cause mortality and cardiovascular-related hospitalizations as well as a delay in disease progression.21 Potential side effects include peripheral edema, but no routine monitoring is required.

Recent novel genetic treatments approved for the treatment of aTTR amyloid patisiran and inotersenhave both shown promise for reducing TTR protein production and others are in development. (Tables 1 and 2).

Inotersen. An antisense oligonucleotide (ASO), inotersen binds to the 3’ end of human TTR RNA causing downstream processing that degrades TTR mRNA to reduce circulating TTR levels. A phase 3 randomized double-blind placebo-controlled study demonstrated improvements on the modified NIS+7 and Norfolk Quality of Life-Diabetic Neuropathy (QOL-DN) scores with inotersen treatment that were independent of TTR mutation type, disease stage, or presence of cardiomyopathy at baseline. Thrombocytopenia and rarely glomerulonephritis were seen, necessitating close monitoring of anyone taking inotersen for early detection of these potential side effects. Prescribers must enroll in a risk evaluation mitigation strategy (REMS) program.23

Vutrisiran is being evaluated as a subcutaneously administered alternative to patisiran, and 160 participants with hATTR-related peripheral neuropathy from 68 clinical sites in 22 countries have been enrolled (Table 2). Individuals will be randomly assigned to receive vutrisiran or patisiran in the parallel assignment portion of the study, and then all participants will be treated with vutrisiran in the open-label extension study. Results from all participants will be compared to that seen in people treated with placebo during the clinical trials for patisiran. Primary results are expected in early 2021. In parallel phase 3 double-blind randomized placebo-controlled trial evaluating vutrisiran is being conducted with participants who have ATTR amyloidosis-related cardiomyopathy. 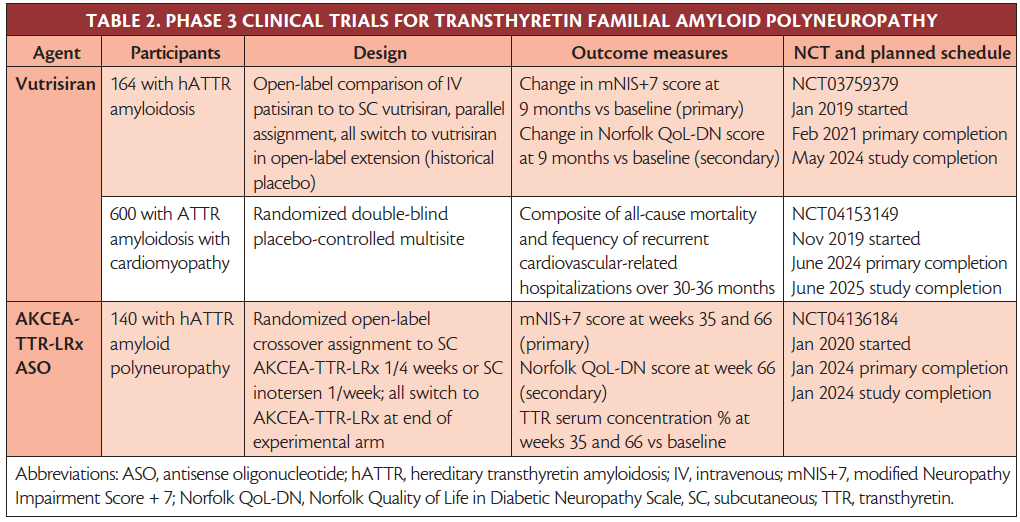 For individuals with TTR-FAP, recent advances in treatment options have provided a novel opportunity for improvement in their lives. Early detection can lead to earlier interventions with treatment that can now slow the progression of disease significantly. Continued investigation into novel approaches for treatment remains promising.

Sodium Phenylbutyrate-Tauroursodiol Extends Survival up to 6 Months in ALS