Who can take us seriously when we are so far from who we once were?; Everything she did and loved, everything she was, required language. -Lisa Genova, Still Alice.

What do Alice Howard, a fictional character from the novel Still Alice, author Iris Murdoch, scientist and artist Anne Adams, and composer Maurice Ravel have in common? They all had language impairments, including difficulty composing music, as a feature of their neurodegenerative condition.1-4 These individuals’ harrowing experiences emphasize the importance of language in conditions associated with dementia. A unifying hypothesis suggests Ravel’s mysterious neurologic illness may have influenced his composition, Bolero.5

Before discussing cognitive disorders in relation to language, it is important to restate the accepted definition of language from the American Speech-Language-Hearing Association: “a complex and dynamic system of symbols used for thought and communication that evolves within specific historical, social, and cultural contexts.”6 Language has broad emotional and psychosocial implications, requiring attention from cognitive neuroscientists and clinicians.

Modern concepts of language come from clinical and neuroimaging studies. Language domains frequently examined in clinical research include phonetics and phonology, lexicon, semantics, and pragmatics.7 The Western Aphasia Battery-R and adaptations of other neuropsychologic instruments are commonly used to assess language disorders in dementia.8 Functional MRI (fMRI) shows language involves activation of both superior temporal lobes, both inferior frontal regions, the left middle frontal cortex, the left anterior insula, and the supplementary cortex for comprehension and articulation. Suppression of unnecessary responses, in contrast, localizes to the anterior cingulate and bilateral head of the caudate nuclei.9 Molecular neuroimaging and MRI have also been used to investigate disorders of language functions.10

In this review, we highlight the complexities of language disorders in dementia, etiologic theories, and the emotional toll language dysfunction takes on both patients and caregivers.

Language dysfunction may be difficult to detect in early stages of Alzheimer disease (AD) because the most common presentation is amnestic syndrome.11 Mild trouble finding relevant words and forgetting names is usually present. With progression, there is more difficulty in naming objects, followed by comprehension problems. A gradual decline of semantic knowledge ensues, and eventually, all linguistic and other cognitive functions are lost.12,13 Recognizing language and speech disorders as prodromal symptoms in a subset of AD may help with earlier diagnosis and improved clinical management. Early onset AD (EOAD) that begins before age 65 years has at least 4 clinical subtypes with focal presentations.14,15 The logopenic aphasia subtype is usually associated with EOAD.16,17

Frontotemporal degeneration (FTD), a less common but important cause of dementia, has recognizable focal syndromes including the language disorders termed primary progressive aphasias (PPAs). A universally accepted framework for the classification of PPAs is needed for clinical and research purposes.17 The initial step for clinically diagnosing PPA is the presence of a prominent language difficulty without associated memory loss, visuospatial impairments, or signs of other medical and neurodegenerative disorders. The next step is classification of the PPA into subtypes with clinical criteria or findings on imaging or an available pathologic diagnosis. Observation of abnormalities in speech production, repetition, comprehension of single words and complex sentences, naming, reading, and semantic knowledge are helpful in further subdividing PPA into the logopenic, semantic variant PPA (svPPA), and the nonfluent/agrammatic (nfvPPA) variants (Table 1).

The nfvPPA and svPPA are frequently associated with FTD, and with nfvPPA, there is frequently difficulty with pronunciation with distortions of words (apraxia of speech [AOS]). Reading is relatively intact for short sentences. Memory is usually not impaired until later in the course of nfvPPA.17

Because of disruption in neural networks, speech and language disorders also occur in the complex neurologic conditions progressive supranuclear palsy (PSP) and corticobasal degeneration (CBD). These conditions, considered as atypical movement disorders, are also associated with a language disorder that resembles the nfvPPA variant. In PSP, AOS is also frequent. The language and speech problems of CBD are commonly an overlapping presentation of nfvPPA and AOS.18 On cognitive testing these disorders show findings of subcortical dementias with slowed information processing. The motor abnormalities of parkinsonism that define the PSP and CBD syndromes may arise later in the course of disease.19

Prion disorders are a group of inherited or acquired brain disorders that consist of dementia, sometimes of rapid onset, and are caused by abnormal proteins called prions. The prion disorders have various clinical presentations and a language problem is a common accompanying symptom of a more generalized “dysexecutive” syndrome.20 However, there are reports are in the literature that an early and isolated symptom of sporadic Creutzfeldt-Jakob Disease (CJD) may be a language impairment resembling nfvPPA.21

Imaging and Pathologic Correlations of Language Dysfunction and Dementia

Correlations between imaging studies and neuropathology are seen in the language disorders of dementia syndromes. Different imaging modalities show patterns of regional atrophy corresponding to the various language syndromes. Information gained from voxel-based MRI (VBM) and molecular imaging with positron emission tomography (PET) scan has led to a better understanding of the language disorders in the subtypes of AD and FTD and is a step towards developing biologic markers for diagnosis and management of complex neurologic disorders.22 On VBM, more neocortical involvement and less hippocampal atrophy is seen the logopenic variant of EOAD compared with findings in late-onset AD (LOAD), which begins after age 65 years. This regional vulnerability can be demonstrated in the left temporoparietal lobes with VBM and with the finding of hypometabolism on PET scan in the logopenic variant of AD.15 Molecular imaging can offer explanations of the neurocognitive syndromes and has been applied to the subtypes of AD. In these disorders, amyloid-β and tau PET scans show both amyloidosis and tau positive pathology. However, in a large study (n=1,343) the probable cause of neurocognitive symptoms of AD, including the logopenic aphasia subtype, was abnormal tau deposition in susceptible cortical regions.23 This finding correlates neuropathologically with a larger number of tangles in the temporoparietal junction than in the entorhinal cortex as seen in typical AD.24 Another important point to consider in the pathophysiology is that the initiating event may be caused by different strains of amyloid-β aggregates that lead to greater focal tau and neurofibrillary tangles in EOAD as compared to LOAD.25

The MRI findings on nfvPPA consist of gray matter atrophy and hypometabolism on fluorodeoxyglucose (FDG)-PET in the left prefrontal gyrus, insula, and temporal lobe.10,17 Mutations in the microtubule-associated protein tau (MAPT) gene on chromosome 17 lead to tau abnormalities whereas the progranulin gene leads to accumulations of TAR DNA-binding protein (TDP-43) and fused-in-sarcoma (FUS) protein.24 The pathology of FTD is heterogeneous but there are some consistent findings when language and speech difficulties are the presenting symptoms of these disorders. In FTD, TDP-43 deposition is seen in 50% of cases, which can be subdivided into 5 subtypes (A-E). In another 40% of FTD, tau deposition is seen, and this can be subdivided into 3- or 4-repeat microtubule-binding domains (3R and 4R). A third type of FTD, occurring in 10% of cases, has deposition of the FUS, Ewing sarcoma (EWS), and TATA binding factor 15 proteins (TAF15), which comprise the FET protein family. The svPPA is associated with TDP-43 type C, and the nfvPPA harbor mainly tau-positive inclusions (Table 2).26,27 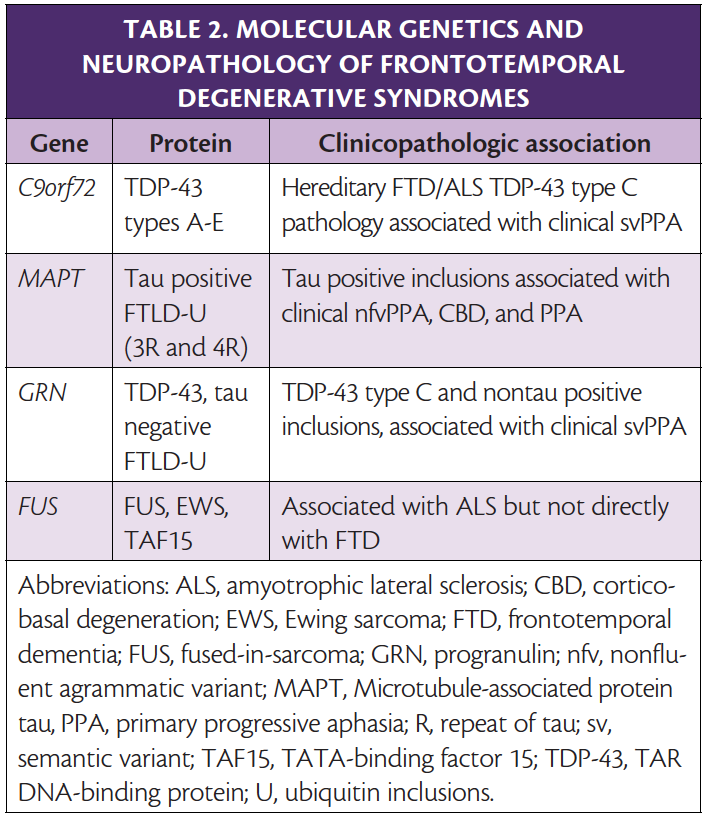 In CBD and PSP, there is atrophy of the motor speech regions, including the left supplementary motor area (SMA), whereas the more prominent white matter atrophy extending into the midbrain is present in PSP.24 Pathologic studies show heterogeneous abnormalities in PSP and CBD, although some studies have shown a relationship to tauopathies.28

It is important to remember how dementia and especially language dysfunctions affect personal lives. Everyone has a personal story to tell and it should be incorporated into a meaningful interaction with the affected person. The concept of person-centered care as detailed in the Alzheimer’s Association 2018 Dementia Care recommendations should be introduced early as physicians and caretakers prepare the patients for the final journey that has been aptly named, The Long Goodbye.

The future of dementia treatment lies in developing biomarkers for early diagnosis and recognition of phenotypes so that this knowledge can be used to test potential therapies on appropriate participants in clinical trials. Advances in molecular genetics in FTD syndromes and fluid and imaging biomarkers in AD are leading to a better understanding of pathophysiology of these disorders. The goal of treatment in the future should be directed towards early intervention so that the devastating consequences of dementia can be delayed or avoided altogether.

FH, DS, and SS-R report they have no disclosures

Alzheimer Disease Risk May Be Measurable in Adolescence and Early Adulthood