First described in 1979 by JO Susac,1 approximately 500 cases of SuS have since been reported, but incidence may be higher because of unreported or undiagnosed cases.2

Susac syndrome is an autoimmune disease of the small arterioles of the brain, retina, and inner ear that has been successfully treated with immunosuppressants, such as cyclophosphamide or steroids.3 Contrast enhancement of brain lesions and leptomeninges hints at an inflammatory process. Occlusions and hyperfluorescence of retinal arteries are signs of vasculitis. Cerebrospinal fluid (CSF) changes are typical for a sterile central nervous system (CNS) inflammation. Brain biopsies demonstrate microinfarcts with loss of neurons, axons, and myelin, and arterial vessel wall proliferation. CD8+-T–lymphocytic infiltrates and thickening of the basal membrane are seen.4-6 Similar changes have been described in muscle, gut and skin biopsies from people with SuS.7-9

A recent study elucidated SuS as a CD8+ T-cell–mediated endotheliopathy,10 in which circulating CD8+ T cells are clonally expanded and differentiate into activated granzyme B- and perforin-expressing cytotoxic CD8+ T cells. These cells accumulate in microvessels near endothelial cells, where they most likely cause injury. Elevated titers of antiendothelial cell antibodies were detected in 25% of people with SuS.11

Individuals with an encephalopathic course experience acute or subacute episodes of cognitive deficits, vigilance or mood changes, psychiatric symptoms (eg, psychosis or depression), fatigue, focal neurologic deficits, and, less frequently, seizures.2 Headaches often precede other symptoms by several months and are reported as being like tension-type or migraine headaches. Hearing loss can occur overnight, with a sudden loss of low, middle or all frequencies, and may be accompanied by an often roaring tinnitus.3,7 The BRAO can lead to scintillating or dark scotomata, or, because they are often located in the periphery of the retina, may be asymptomatic. In a systematic review, the classical clinical triad of symptoms was seen at disease onset in only 13% of cases.2

Because symptoms of the triad may appear successively with intervals up to several years, early diagnosis can be complicated. The mean number of relapses is 2.4, and the mean duration of active disease is 21 months, although some patients may have relapses for decades.12 The outcome depends on the residual symptoms after the episodes and may range from full recovery to severe disability. Cases of death have been described in individuals with SuS, but death is not caused by the disease but rather by treatment complications.13,14

Brain MRI is crucial for diagnosis of SuS. Characteristic round snowball lesions in the center of the corpus callosum, are typical for the acute phase of SuS and can be seen best in fluid-attenuated inversion recovery (FLAIR) sequences (Figure 1).18,19 Of note and in contrast, MS lesions are typically located at the undersurface of the corpus callosum rather than in the center. Lesions of the white matter are frequently found in the centrum semiovale and in periventricular or subcortical regions, as well as in the cerebellum or the brainstem.18 Gray matter is affected in 70% of cases, and leptomeningeal contrast enhancement (30%) or contrast-enhancing lesions (70%) can be found in the acute disease phase.18 Diffusion restrictions in the acute phase represent ischemic strokes.20 Diffusion tensor imaging (DTI) demonstrates structural damages of the fiber integrity in the prefrontal cortex and the genu of the corpus callosum.21 On 7 T MRI, lesions in people with SuS are different from lesions of MS in that there is no central vein sign and rarely a hypointense rim.22 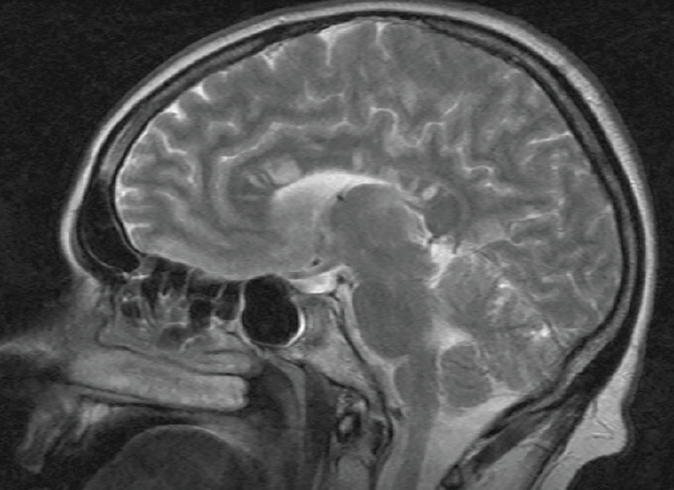 The CSF analysis findings in SuS also differ from those in MS, but resemble those seen in primary CNS vasculitis. In SuS, there are findings of mild lymphocytic pleocytosis, an elevation of the total protein up to 2 g/dL, and signs of a disruption of the blood CSF barrier are frequent and oligoclonal bands are not common.2,23,24 A recent study has shown that in contrast to MS no plasmacytoid cells occur in the CSF of SuS patients, whereas proportions of activated cytotoxic CD8 T cells are elevated.10

Fluorescein angiography is the standard for detecting BRAOs and arterial wall hyperfluorescence in the acute phase of SuS (Figure 2). The detection of yellow mostly transient retinal arterial wall plaques or Gass plaques is considered pathognomonic.25,26 Optical coherence tomography (OCT) is a noninvasive technique to visualize postischemic retinal defects in the postacute phase that helps to differentiate SuS from MS.27 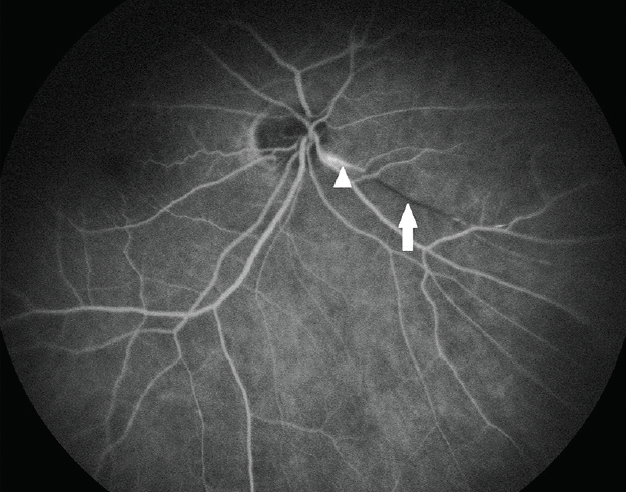 Because arteries feeding the apical cochlea are occluded,13 audiograms usually reflect nonspecific hearing loss, particularly in lower frequencies,5 that is often irreversible.23 Peripheral lesions of the vestibular organ can be detected by caloric testing of the vestibular organ, vestibular evoked myogenic potentials, or nystagmography.28

To facilitate SuS diagnosis, diagnostic criteria have been suggested based on the characteristic clinical and paraclinical signs and symptoms of the triad, which are encephalopathy, hearing loss, and visual disturbances caused by BRAOs. In individuals who fulfill all 3 criteria, a definite diagnosis can be established. In cases with only 2 organs involved, the diagnosis should be considered as probable. There is no difference in treatment for probable vs definite SuS.28

Because no randomized controlled trials of treatment of SuS have been done, there are no approved therapies. Treatment is empiric, consisting of immunotherapy combinations based on mostly retrospective case series and expert opinions. Some recommend an aggressive and early treatment and treat even mild courses with corticosteroids, IVIG, mycophenolate mofetil (MMF), and optionally, rituximab.29 Some> Others suggest corticosteroids and IVIG, adding rituximab and/or mycophenolate mofetil only in breakthrough disease, and cyclophosphamide, only if there is still disease activity after MMF and rituximab.30 Subcutaneous immunoglobulins have been successful and are well accepted by patients.31 In a retrospective case series, treatment with IVIG and plasma exchange was beneficial.24 Clinical stabilization has been reported after treatment with the tumor necrosis factor (TNF)-α inhibitors infliximab and adalimumab.6,32,33 Natalizumab resulted in a decrease of disease activity in 4 individuals.10 Antiplatelet therapy or anticoagulation effects are unknown, although we usually add an antiplatelet agent (eg, acetylsalicylic acid) owing to pathophysiologic considerations.34

In conclusion, SuS is a rare autoimmune disease with characteristic clinical and paraclinical features, which is important to differentiate from MS and other types of vasculitis. In clinical practice, for those with unclear encephalopathy, visual disturbances and sensorineural hearing loss, SuS has to be considered as a differential diagnosis, and cerebral MRI, fluorescein angiography, OCT, and audiogram should be performed.