It is imperative to promptly recognize and treat sensory neuronopathies because arrest of disease progression and reversal of deficits may be possible.

AntiHu-associated sensory neuronopathy is distinguished by sensory ataxia that is often painful. Concomitant neurologic manifestations (eg, limbic encephalitis, motor neuropathies, cerebellar dysfunction, and brainstem symptoms) are often present. Autonomic dysfunction is also common. Although small cell lung cancer is classically associated with antiHu paraneoplastic syndromes, many other malignancies have been reported including Hodgkin lymphoma, breast cancer, ovarian cancer, prostate cancer, sarcoma, and neuroendocrine tumors. The sensory neuronopathy is often the harbinger of the cancer, preceding the diagnosis of malignancy by up to 8 months. Amphiphysin antibodies are commonly linked to breast cancer and have recently been described in association with a diffuse sensory neurono-pathy.2 AntiCV2/collapsin response mediator protein 5 (CRMP- 5) antibodies have also rarely been reported in association with sensory neuronopathies.3

Autoantibodies to the intracellular domain of fibroblast growth factor receptor 3 (FGFR3) have been identified in some people with sensory neuronopathy and can often be the only marker of autoimmunity.4 These antibodies are unknown to be pathogenic or simply a biomarker of autoimmunity. The clinical characteristics of 65 Brazilians and Europeans with FGFR3 sensory neuronopathy have recently been described. Most of these individuals had a nonlength-dependent presentation, with asymmetry occurring in one-third of this cohort. The onset of the neuropathy tended to be either in the lower limbs or all limbs. The sensory neuronopathy was characterized as painful in approximately half the cohort with symptoms of dysautonomia occurring rarely. The neuronopathy tended to become prominent in the lower limbs and less severe in the upper limbs. In approximately half of these individuals, immunotherapy was attempted, but there was no evidence of improvement or even stabilization with treatment. Clinical worsening appeared to be associated with intravenous IgG immunoglobulin (IVIg) and corticosteroid treatments.

Immune-checkpoint inhibitors (ICIs) are efficacious for many solid tumors that trigger humoral and cell-mediated immune responses directed towards self-antigens. These ICIs have also been associated with autoimmune disorders of the central and peripheral nervous systems. Pembrolizumab was associated with antiHu- and antiCV2-mediated sensory neuronopathy in a person with Merkel cell carcinoma.5 Sensory neuronopathy without specific antibodies similarly developed in a person with melanoma treated with ipilimumab.6 A case of Sjögren’s-associated sensory neuronopathy triggered by pembrolizumab in the setting of melanoma was also reported.7

After an extensive but fruitless search for an underlying etiology, nearly half of sensory neuronopathy cases will be considered as idiopathic. Compared with other forms of the disease, there may be an indolent gradually progressive course. These disorders are felt likely to represent an autoimmune process and a trial of immunotherapy is warranted.1

The 3 natural forms of vitamin B6 are pyridoxal, pyridoxamine, and pyridoxine, the latter of which is the form typically used in commercially available supplements. Sensory neuronopathy has been reported in people taking toxic doses of pyridoxine for several months. The dose generally needs to exceed 2 g/day, although a single person was reported to develop a sensory neuronopathy with a dose as low as 200 mg/day.8,9 It is unclear how B6 toxicity results in damage to the DRG, although it is known that microtubule-neurofilament dissociation in the DRG is ultimately what leads to neuronal death.10 Discontinuing vitamin B6 should result in some improvement of symptoms, although in many cases, residual deficits remain.

The DRG contain cell bodies of sensory pseudounipolar neurons and have a fenestrated blood supply, resulting in a relatively leakier blood-nerve barrier and making these cells more susceptible to antibodies and toxins. The pathophysiology of sensory neuronopathies varies depending on the underlying etiology, and much remains to be learned about the exact pathomechanisms of these diseases. In paraneoplastic neuronopathies, the expression of neuronal proteins on cancer cells likely triggers the immune reaction. Onconeural antibodies then induce cell-mediated damage to neurons and axons. The antiHu antibodies are thought to be taken up by living neurons with downstream intracellular binding resulting in cell death. Sjögren’s-associated and paraneoplastic sensory neuronopathies appear to be CD8 cytotoxic T cell-mediated disorders.

The early ataxia that is a hallmark of sensory neuronopathies likely results from damage to proprioceptive afferent fibers from the proximal limbs and trunk. In severe cases, pseudoathetosis of the fingers and toes may be present. Individuals also report generalized or multifocal asymmetric sensory deficits and positive sensory symptoms (eg, burning, paresthesia, and electrical pain), suggesting involvement of small nerve fibers. In pure sensory neuronopathies, strength is spared, although individuals may have difficulty sustaining a constant muscle contraction. Deep tendon reflexes are often unobtainable. The Sensory Ataxia Rating Scale (SEARS), which uses examination findings, was recently developed to capture the severity of sensory neuronopathies.11 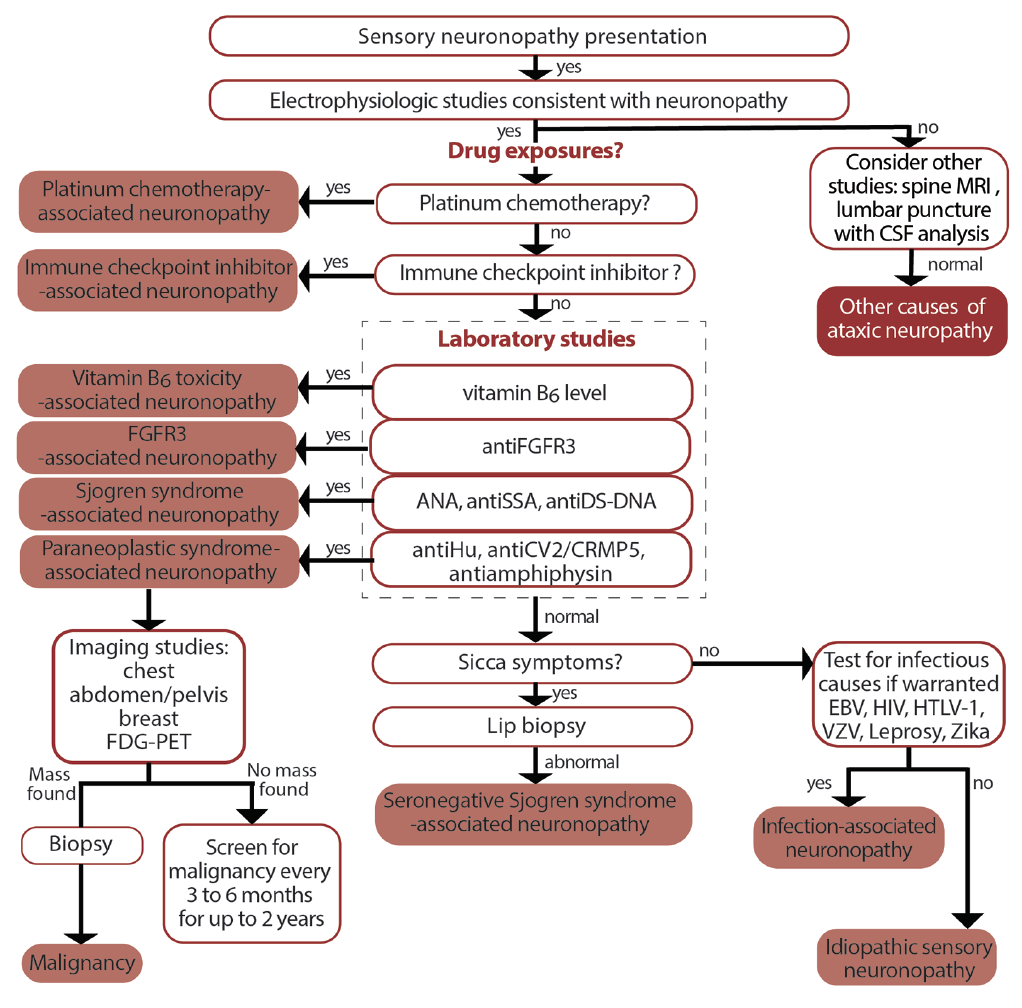 Many sensory neuronopathies are autoimmune and thus, in theory, amenable to treatment with immunotherapy. Unfortunately, given the rarity of these polyneuropathies, there is a lack of high-quality evidence to guide treatment. Therapeutic recommendations are based on uncontrolled studies and expert opinion. AntiHu-associated paraneoplastic sensory neuronopathy should be treated with high-dose corticosteroids and/or IVIg followed by cyclophosphamide if the cancer is not found.13 Other reported treatments include plasma exchange, rituximab, and sirolimus. Treatment of the underlying malignancy may stabilize or improve the associated paraneoplastic syndrome.14 Similarly, in Sjögren’s syndrome-associated sensory neuronopathy, no randomized-controlled trials exist. Various treatments including IVIg, plasma exchange, corticosteroids, azathioprine, rituximab and cyclophosphamide have been used. A treatment window has been suggested based on a study of serial nerve conduction studies in people with inflammatory sensory neuronopathy.15

Treatment should be initiated within 8 months of symptom onset for stabilization and within 2 months, if possible, potentially to reverse the deficits. In the few cases of ICI-associated sensory neuronopathy, corticosteroids have been used with some benefit. Treatment of toxic sensory neuronopathies consists of stopping the offending agent.

Regardless of the underlying etiology, symptomatic management of the associated neuropathic pain may be necessary. Typical medications used include gabapentin, pregabalin, amitriptyline, and duloxetine.

The sensory neuronopathies are unique heterogenous neuronopathies characterized by an early profound sensory ataxia and multifocal or generalized sensory deficits. The practicing neurologist should be aware of the acquired causes of these neuropathies to allow prompt diagnostic evaluation and initiation of treatment. It is hoped that future identification of associated autoantibodies will further understanding of the underlying pathophysiology and result in the development of more focused and successful therapies.

KGG has received speaking and consulting honoraria from Alexion Pharmaceuticals