Ibudilast is a phosphodiesterase inhibitor that has shown some benefit for progressive multiple sclerosis in a phase 2 trial.

Ibudilast (3-isobutyryl-2-isopropylpyrazolo[1,5-a]pyridine) is a small molecule drug that has been used in Japan and Korea for the treatment of bronchial asthma and cerebrovascular disorders (eg, poststroke dizziness).1 The mechanisms of action of ibudilast have been widely explored, and a role as a nonselective cyclic nucleotide phosphodiesterase inhibitor (PDEi) has been described.2 Ibudilast has been reported to act as a leukotriene D4 (LTD4) antagonist, anti-inflammatory, platelet-activating factor (PAF) antagonist, and a vasodilatory agent. Ibudilast is thought to have a neuroprotective effect in the central nervous system, presumably via suppression of glial cell activation.3-5

Ibudilast in an Animal Model of Multiple Sclerosis

In the experimental autoimmune encephalitis (EAE) rat model of multiple sclerosis (MS), placebo, 2 mg/kg ibudilast, or 10 mg/kg Ibudilast were administered for 16 days. There was a significant statistical difference in the mean clinical score between the rats that received 10 mg/kg of ibudilast vs placebo. In the histologic sections of the spinal cord, there was a significant reduction of inflammatory infiltration in the ibudilast-treated group. Ibudilast-treated rats also had a reduction in myelin basic protein (MBP)-specific T-cell proliferation in the inguinal lymph nodes. Ibudilast was also found to have inhibited macrophage and microglia activation.2

Clinical trials of PDEis and ibudilast suggest a potential role as a treatment for relapsing MS (Table).6-9 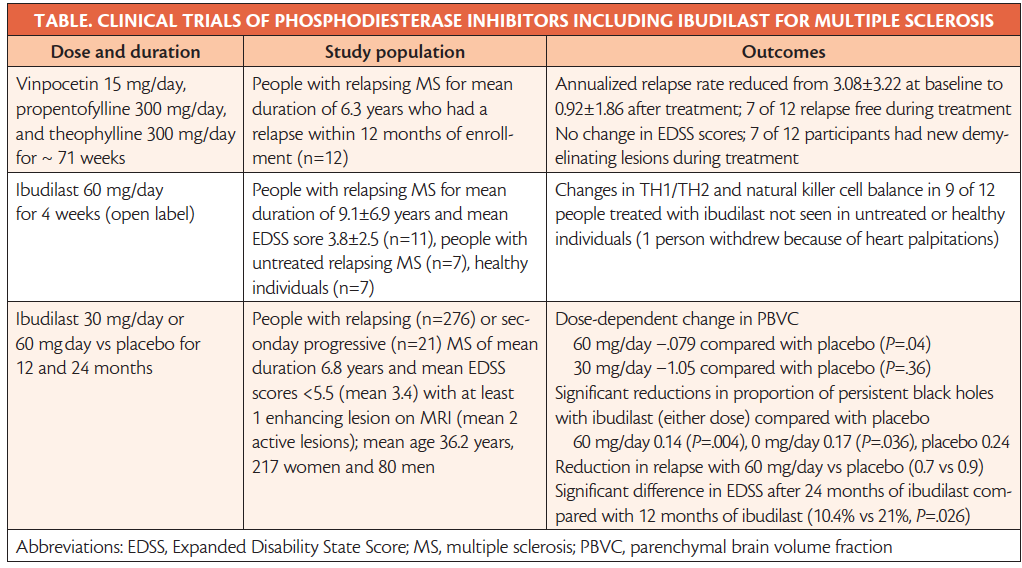 In the second trial, an open-label short-term study, ibudilast treatment changed the balance of Th1/ Th2 cells and natural killer cells in 9 of 11 participants, as measured by serum levels of tumor necrosis factor-α (TNF-α), interferon (IFN)-γ RNA, and IFN-γ/interleukin-4 mRNA ratios. No changes in these markers were seen in either the 7 individuals with untreated MS or in the 7 healthy people.7

In the third trial, a multicenter, double-blind phase 2 trial of ibudilast, there was a dose-related effect on percent brain volume change (PBVC)and a lower proportion of persistent black holes between month 2 and month 10 for those treated with ibudilast vs placebo. Clinically, there was a slight reduction in the annualized relapse rate (ARR) and a significant difference in lower EDSS scores for those who had ibudilast for 24 months compared with 12 months. The most common side effects with ibudilast were upper respiratory infections, headache, and nausea.8,9

Post-hoc analysis showed the treatment response compared with placebo occurred in participants with primary progressive MS (P=.005) and not in those with secondary progressive MS (P=.97).12 Similar results were observed after adjusting for differences in treatment groups (T2-lesion volume, RNFL, and longitudinal diffusivity). The significance of this apparent differential response is uncertain at this time. Additional investigation of ibudilast will be required to learn whether it will have a role in treating progressive MS.

ADG did not report any disclosures