Compared with whites, racial minorities with multiple sclerosis (MS) have distinct disease characteristics but historically low participation in clinical trials of disease-modifying therapies (DMTs).1-4 This may be due in part to where participating centers are located but may also be reflective of concerns that affect willingness to participate in clinical studies. Analysis of data from integrated health systems also challenge the notion that the incidence of MS is highest in white women. Data from Kaiser Permanente suggest that the risk for MS is higher in black women than in whites.1 When we were asked to provide a review of DMTs for people with MS of varied racial and ethnic backgrounds, we faced a relative paucity of studies with representative sample size to supplement our own experience. To nevertheless glean what we could from reported studies, we performed a systematic review of the literature evaluating efficacy of approved DMTs in blacks, Hispanics, and Asians published as of December 2019 and including measures of efficacy (Table 1). 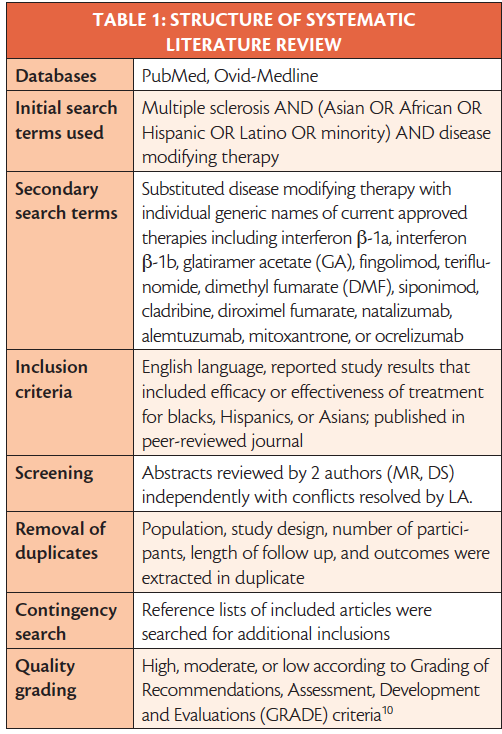 Of 275 search results, 32 articles met the inclusion criteria; only 4 were randomized controlled trials (RCTs). Methodology of other studies varied (4 open-label extensions, 9 subanalyses of RCTs, 3 prospective cohort studies, 1 cross-sectional study, and 11 retrospective cohort studies). The majority of studies (n=20) had a sample size of less than 100 and about one-third had fewer than 50 participants. There were 15 studies with a comparator (placebo or active comparators). In the multinational RCTs, minority participation was low, with participants ranging from 2.3% to 16.1% black, 14.4% to 63.1% Asian, and 7.0% to 7.5% Hispanics. Despite the call for inclusion of minorities in clinical trials (NIH Revitalization Act of 1992) minorities remain under-represented in studies for treatment of MS.4,5 Other than for the RCTs, quality ratings were low. Summaries and quality ratings are given in Tables 2-4.10 Relapse measures were reported in 78% of studies and imaging (44%) and disability (28%) measures were available in less than 50%. 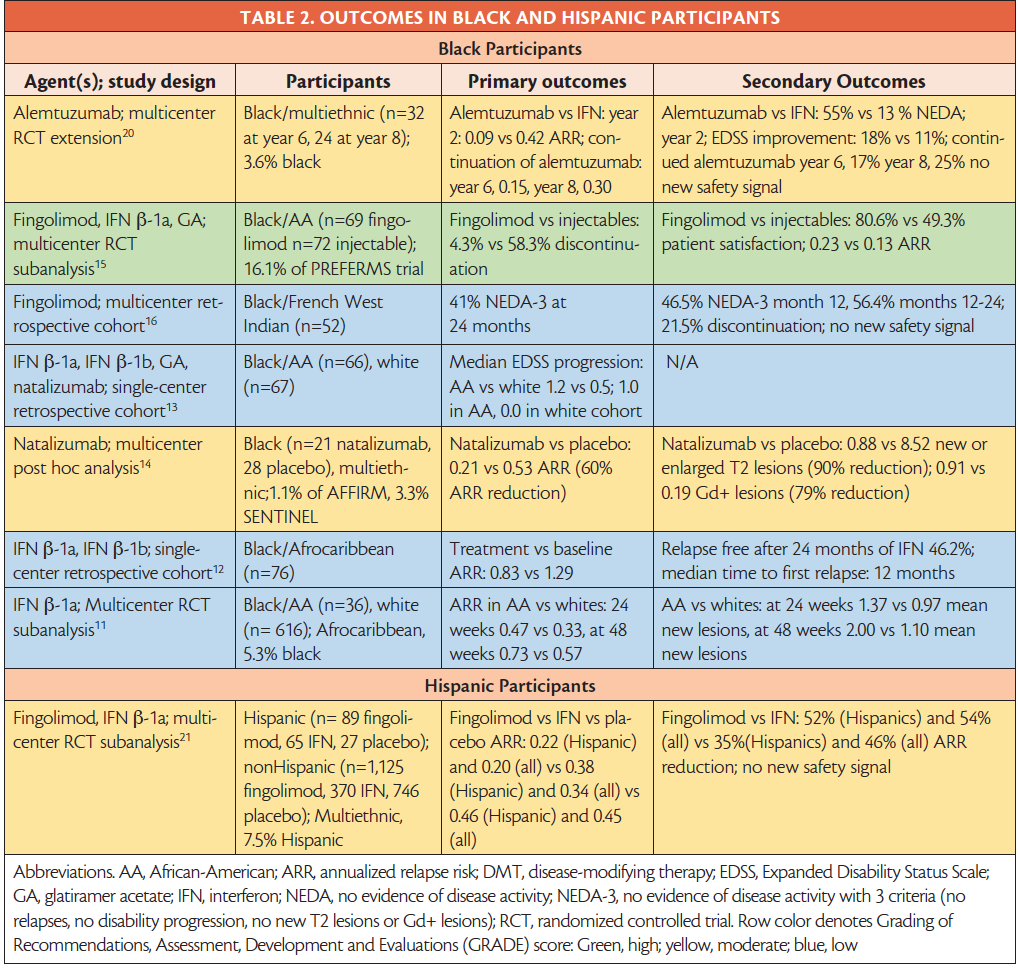 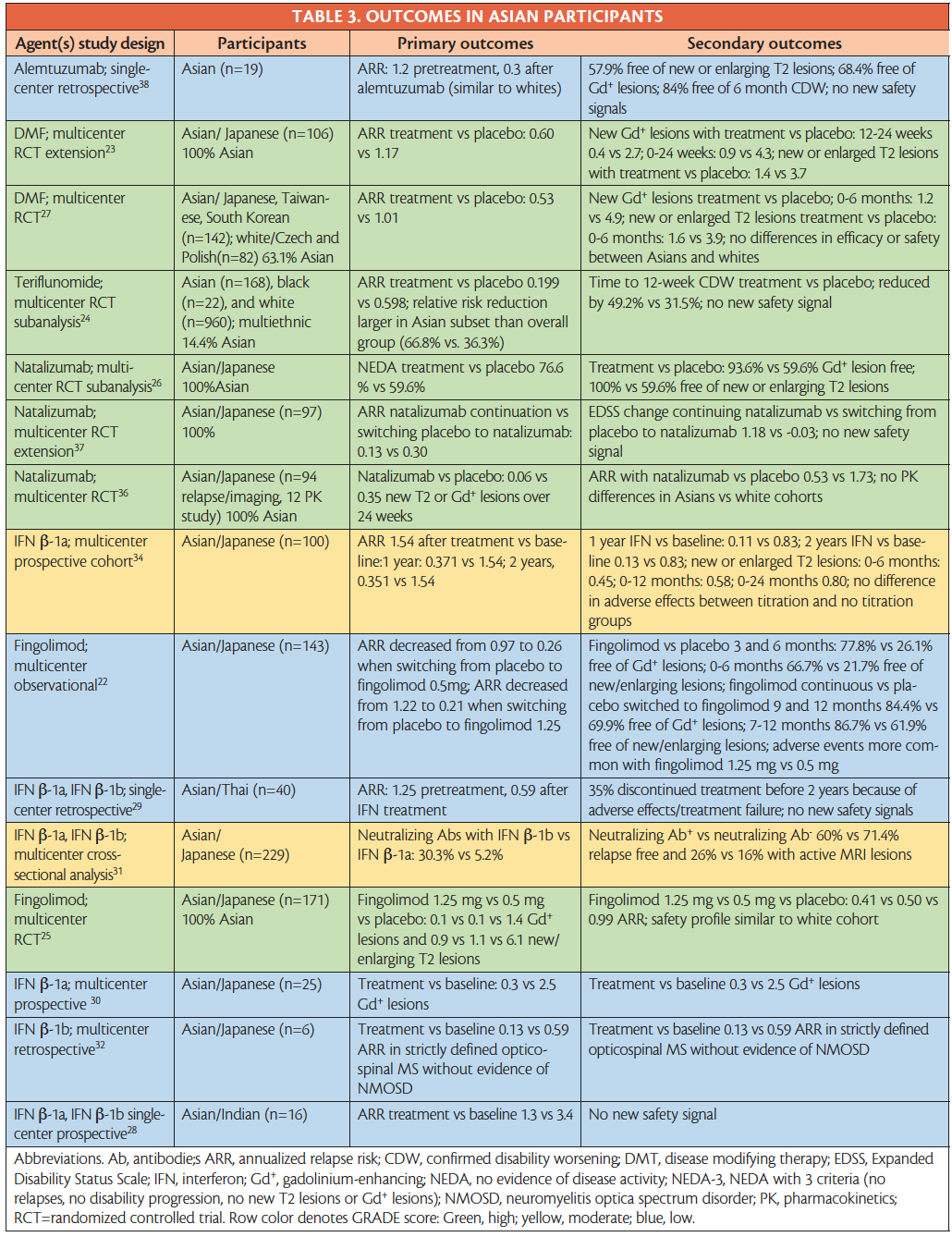 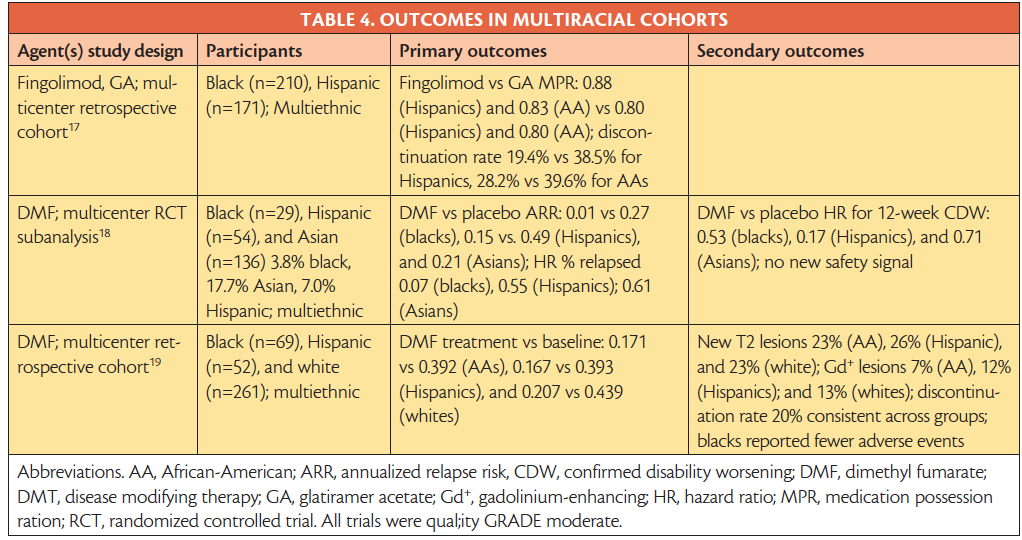 Several studies found interferons less effective in blacks compared with whites. In a post hoc analysis of a trial of intramuscular vs subcutaneous interferon β-1a, a greater proportion of African American (AA) participants had relapses compared with whites (mean 0.73 vs 0.57, P=.06).6 Additionally, an increase in T2 lesions on MRI in blacks compared with whites was seen (mean 2.00 vs 1.10, P=.04).6 A retrospective study of Afrocaribbeans, using a pre- and postanalysis of interferons, reported reduced ARR from 1.29 to 0.83 at 24 months with treatment, but the proportion of relapse-free participants at 48 weeks was lower than in the white cohort from the EVIDENCE trial (46% vs. 57%).7 In a retrospective study of interferons, GA, or natalizumab, AAs had a greater disability accrual at 1 year compared with whites (mean 1.2 vs 0.5) despite equal rates of high-efficacy DMT use (15%), suggesting poorer response to DMTs in AA participants.8

Higher-efficacy DMT trials support positive outcomes with use in blacks.9-15 The PREFERMS phase 4 trial evaluating medication adherence included 16% AAs. Higher retention rates (80.6% vs. 30.4 %) and patient satisfaction were reported for AAs taking fingolimod compared to those using interferons or GA (P<.0001).10 Lower ARRs were also reported compared with injectables (0.13 vs. 0.23), although this was not statistically significant.10 Fingolimod was also effective in a cohort from the French West Indies with approximately 41% meeting criteria for no evidence of disease activity (NEDA-3) including relapses, new lesions, or gadolinium enhancing (Gd+) lesions at 24 months.11 Additionally, the average ARR dropped from 1.00 at pretreatment to 0.19 at month 24 of therapy.11

There is evidence for infusion therapies use in blacks or AAs.9,15 For example, natalizumab therapy reduced ARR over 2 years in those who participated in the SENTINEL or AFFIRM phase 3 trials compared to placebo (0.80 vs 0.30, P=.01).9 New or enlarging lesions were reduced by 90% (P=.008) and Gd+ lesions were reduced by 79% (P=.02). These results were similar to the nonblack populations in the larger studies.9 Although statistically significant benefits on disability measures were not found, this was likely affected by low participation with only 2% of participants being black. In a subanalysis of the TOPAZ Study, an 8 year follow up of the phase 3 trials for alemtuzumab, 43 individuals (4%) were identified as black. In this subgroup, alemtuzumab reduced the ARR at year 2 compared with interferon β-1a (0.9 vs. 0.42, P=.037) and 91% of those taking alemtuzumab were relapse free.15 Persistent reductions in ARR were observed at 6 and 8 years (0.17 and 0.20) with 72% and 55% being free from disability worsening at 6 years and 8 years, respectively.15

Only 4 studies evaluated DMT efficacy or effectiveness in Hispanics. Within this limited data, Hispanic participation in large phase 3 clinical trials was low, with only 7% participation in studies for fingolimod or DMF.13,16 In the FREEDOMS I and II and TRANSFORMS fingolimod trials, the ARR was lowest in participants who received fingolimod compared with both interferon β-1a and placebo (0.22; [CI: 0.14-0.35] vs 0.34 [CI: 0.18-0.63] vs 0.46 [CI: 0.24–0.88], respectively) but these differences did not reach statistical significance.16 Hispanics were reported to have a preference for fingolimod with higher rates of persistence and lower rates of discontinuation compared with GA.12

Of those treated with DMF vs placebo in the DEFINE and CONFIRM phase 3 trials, there was a reduction in the ARR (0.15 vs .49) and disability progression (HR 0.17), although again this was not statistically significant.18 Additionally, a retrospective cohort measured ARR and new lesions pre- and posttreatment with DMF and reported improvements in both ARR (0.393 vs 0.167; P=.03) and a lower rate of participants with new lesions (26% vs 52%; P=.02).14

Several studies are designed for cohorts to have a majority of Asian participants (63%-100%). However, Asian participation in multinational pivotal phase 3 trials remains low at 14% to 17%.13,17-22

Interferons have been extensively studied in Asians.23-27 An RCT conducted in Japan showed higher efficacy for the higher dose of interferon β-1b compared with a lower dose (ARR 0.76 vs. 1.07, P=.047).28 A prospective pre- and posttreatment study also supports that interferon β-1a is effective over 2 years.29 However, despite good clinical outcomes, there was an increase in the mean number of new or newly enlarging T2 lesions throughout the study (0.45 to 0.80).29 Nevertheless, subsequent studies showed improvement in Gd+ lesions over 12 and 24 weeks using pre- and posttreatment analysis (P=.0012).25 Evaluating different phenotypes, a retrospective cohort of 6 subjects with opticospinal MS without evidence of NMOSD, mean ARR (0.59 to 0.13) and EDSS (4.1 to 3.1) were reduced compared to baseline after treatment with interferon.27 Other studies reported benefits of interferons in Indian, Thai, and Chinese participants.23,24,30 The rate of occurrence of neutralizing antibodies and resulting clinical implications were also no different than what was seen in studies in whites.26

Efficacy of teriflunomide was evaluated in a subanalysis of the phase 3 TOWER study with a population that was 14% Asian. Asians treated with teriflunomide had a 66.8% relative relapse reduction compared with placebo (P=.0015) and had a numerically lower risk of disability worsening compared with placebo (49.2%), although this was not statistically significant (P=.31).19 No statistical analysis of differences among population subgroups was made.

There is evidence to support the efficacy of DMF in Asian populations. The APEX study was a phase 3 RCT designed to evaluate the efficacy in Asians (n=142 from Japan, Taiwan, and South Korea) and included a European comparator group (n=82).22 New Gd+ lesions were reduced by 81% with DMF compared with placebo and ARR was reduced by 47% in all Asians.22 In the Japanese cohort, DMF treatment reduced new Gd+ lesions by 85% and ARR was reduced by 48%.22 No difference in outcomes was seen among Japanese, all Asian, or European cohorts.22 A subanalysis of the DEFINE and CONFIRM multinational phase 3 studies showed similar results.13 Asians comprised 17% of the cohort and experienced relapse reductions with DMF treatment compared with placebo (relapse ratio 0.64) and lower disability progression (20% vs 25%), but these did not reach statistical significance. No difference in disability progression was found across race or ethnic groups.13 An extension of the APEX trial showed a reduction of Gd+ lesions from 0.7 to 0.1 at week 48 in Japanese participants who switched to DMF treatment. In the group continuing DMF, the mean number of Gd+ lesions remained low (0.2 and 0.3 at 24 and 48 weeks).18 There were no differences reported between Asians and whites.22

Fingolimod has also been tested in Japanese individuals in a phase 2 RCT followed by an extension trial.17,20 Treatment with fingolimod increased the proportion of participants who were free of Gd+ lesions at 6 months compared with placebo (86% vs 40%, P<.001).20 In the extension trial, those who switched from placebo to fingolimod experienced reductions in the number of Gd+ lesions (1.3 vs. 0.1 for 0.5 mg of fingolimod).17 For the group continuing treatment, the number of Gd+ lesions remained low (0.1 and 0.0).20 Treatment with fingolimod reduced ARR from months 0 to 6 and 7 to 12 in both the continuing-treatment group (0.47 to 0.23) and the newly treated group (0.97 to 0.26).20 Natalizumab has also shown efficacy in Asian populations. Treatment with natalizumab reduced rates of new MRI lesions by 84% compared with placebo (P<.001) and reduced ARR 69% (0.53 vs. 1.73, P<.001).31 In a subanalysis, a greater proportion of patients treated with natalizumab vs placebo achieved NEDA-3 (76.6% vs 31.9%, P<0.001).21 In the extension study, participants who initially received natalizumab continued to have a lower relapse rate than those who received placebo and switched to natalizumab (0.13 vs. 0.30).32

A retrospective cohort study evaluated the effects of alemtuzumab on 19 Korean individuals. The posttreatment ARR was significantly reduced compared to pretreatment baselines (0.3 vs 1.2, P<0.001).33 At a mean follow up of 1.5 years, 84% of the participants were free from disease worsening, and 15% experienced disability improvement.33

Previous literature indicates that MS varies by race and ethnicity.1-3,34-37 Hispanics and blacks have been reported to have increased disability compared with whites2,35,37 and Asians were previously thought to have higher rates of opticospinal MS.3,38 The quality of the currently available information for efficacy of DMTs was highest for Asians because of studies designed for Asian cohorts. A call to increase minority clinical trial participation4 does not appear to have affected contemporary multinational pivotal RCTs. Within the pivotal trials that have had sub-analyses of race or ethnicity only 7% of participants were Hispanic, 1% to 16% were black, and 14% to 17% were Asian. Addressing this through study designs ensuring an adequate representation of nonwhites should be a priority. Outside of a few RCTs, the overall quality of evidence studying DMTs in minority populations is low with significant limitations in study design including post hoc analyses, retrospective designs, and low power. Nevertheless, there is valuable information supporting DMT efficacy and effectiveness in minorities with MS.

We found studies supporting the efficacy of interferons, fingolimod, teriflunomide, dimethyl fumarate, natalizumab, and alemtuzumab in Asian populations. Additionally, studies evaluating efficacy or effectiveness in Asians vs whites found no differences, suggesting that DMT choice does not need to differ in Asian patients.13,18,21,22,24,26,31,33 In blacks, we found evidence that injectable medications may be less efficacious and effective than in whites.6-8 There is evidence that higher-efficacy medications, including DMF, fingolimod, natalizumab, or alemtuzumab are efficacious and effective in blacks.9-15 It is reasonable to infer that black individuals with MS are at higher risk for disability with interferon or GA treatment than whites. These risks should be included in the risk-benefit discussions with patients and could support the decision to start higher-efficacy medications. Such differences may also require access to high-efficacy medications from diagnosis. There is significant variability between insurance plans concerning this, particularly Medicaid, and plans may have restrictive formularies. Within the limited studies evaluating Hispanics, there is evidence to support the efficacy of interferons, dimethyl fumarate, and fingolimod. There were no clear differences in efficacy found between Hispanics and other racial or ethnic groups.12-14 Without evidence that Hispanics respond to therapy differently than other populations, it is reasonable to use typical decision-making processes when choosing a DMT. It may be advisable to counsel patients on the increase in risk of disability when making these decisions.2,37

As outlined there are limitations to interpreting these studies. Many are low-quality evidence, and variation in methodology prevents cross-trial synthesis. Despite concerns about increased disability in Hispanics or AAs and potentially less response to DMTs in AAs, there are almost no a-priori comparisons of effectiveness across race or ethnic groups. Future RCT studies should strive to increase minority representation and planned analyses that incorporate race and ethnicity.

2. Avasarala J. Inadequacy of clinical trial designs and data to control for the confounding impact of race/ethnicity in response to treatment in multiple sclerosis. JAMA Neurol. 2014;71(8):943-944.