Many headache types can occur in the night, including some that may be exclusive to dream periods.

A cadre of primary and secondary headache disorders have a predilection for stalking the night, striking in the wee hours, adding in pain and misery what they subtract in restful slumber (Case Study Presentation). Although far less common than that ubiquitous grand dame of headache disorders, migraine, these headache types need to be recognized because some are easily treatable (and treatment options vary wildly depending on the type) and others, if not detected, may be ominous.

Margaret dreaded the night. In what she was constantly reminded by her children were her Golden Years, the retired and widowed school principal had developed what she knew was an entirely dysfunctional bedtime routine. Her hand busy worrying a set of beads, she’d pace the upstairs hallway in slippers, wearing out the shag rug—trying to tire herself out—willing the over-the-counter sleep aides she consumed in alarming quantities to finally kick in. When she could scarcely set 1 foot in front of the other, Margaret would make her way into bed. An eternal optimist after all these years, she would close her eyes and pray for her family, her friends, and for a painless repose.

Yet, as always, at 1:40 am—like clockwork these last 6 months—Margaret parted company with her dreams and gripped her head in pain. A deep dull ache sprang from behind her eyes and metastasized throughout her skull. She reached over to her nightstand, gulped some pills with water, and applied an ice pack to her aching head, all of which she readied each night as part of her dysfunctional bedtime routine. As she lay in the darkness and winced in misery, Margaret thought, “Golden Years indeed”.

Next to Margaret, on most nights, lay Martin, her significant other, who she met (online, at her daughter’s prompting) a decade after her husband Will had passed. A few years younger than his girlfriend, Martin still worked part time selling insurance, a job that on occasion took him out of state. On a Tuesday, around 2:30 am on an early spring day, Martin phoned Margaret. He knew, of course, that she’d be awake, most likely clutching an icepack to her head.

The pain that shook Martin like a rag doll from sleep, jolting him out of bed to pace his hotel room frantically 2 hours before calling Margaret, was like nothing he’d ever experienced. A shaft of blinding white-hot agony, emanating from his right eye and burrowing deep inside, crouched in some shadowy spot like a caged rabid animal. A panicky terror was spawned in subterranean brain regions Martin could not name. Although he was normally an old-school stoic type, Michael cried from the torment; curiously, only his right eye leaked.

Margaret was terrified. Through her own pain and sleeping-pill fog, she offered to drive immediately to the hospital. “No need to,” Michael replied, “They gave me something, a shot; my pain is gone. And the CAT scan was fine. I’m heading back to the hotel, maybe to get some more sleep. But the doc told me to see a neurologist right away. Maggie, I think we both need to go.”

If this small but important group of nocturnal headache maladies had its own grand dame, it would be hypnic headache, an exclusively nighttime headache with alarm-clock-like precision of arrival (Box 1).1,2 Onset of hypnic headache is commonly after age 50 (reported average age of onset is 62, with a range of 30-84), and it is more common in woman. Estimates in the US and Germany are that 0.1% of primary headaches are hypnic, and time to diagnosis is 1 to 35 years (mean 5 years) after onset, suggesting hypnic headache is not well-recognized in the medical community. The pain may be unilateral or bilateral, often lasting a few hours, with an intensity described as mild in 4%, moderate in 60%, and severe in 37% of cases. Autonomic features are rare. Polysomnography reveals that hypnic headache occurs frequently during rapid eye movement (REM) sleep, often the first REM cycle of the night, corresponding to the observation that the pain of hypnic headache usually wakes people from a dream. Multiple attacks occurring during multiple REM phases have been reported. Unfortunately, there has been little research on hypnic headache, and the exact physiology remains to be elucidated. 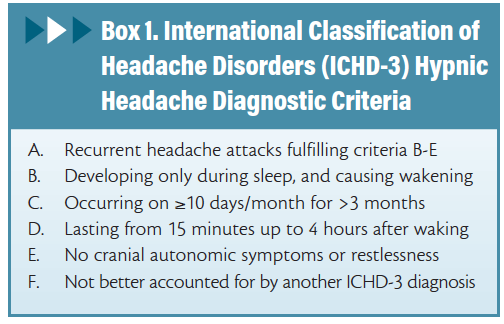 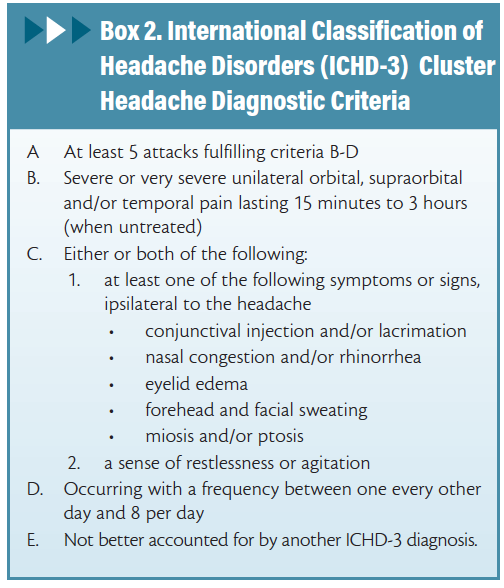 More common in men than women, cluster headache (CH) occurs in about 0.1% of the population and has circadian and seasonal rhythmicity (Box 2).2,3 Although cluster attacks may occur during the day, the majority awaken the individual about 1 to 3 hours after they fall asleep with severe unilateral orbital pain and autonomic features such as eye tearing and redness, lid droop, and nasal congestion—all on the side of the pain. People with CH have been shown to be poor sleepers even between cluster cycles and to have lower circulating melatonin levels and a desynchrony between melatonin and cortisol compared with those without CH. At least 3 separate systems are involved in CH, including the trigeminovascular system, the autonomic nervous system (via the sphenopalentine ganglion), and the hypothalamus. The suprachiasmatic nucleus (SCN), which functions as a circadian clock, lies within the hypothalamus. Recently, a significant association was found between CH and a single nucleotide polymorphism (SNP: rs12649507) in the circadian locomotor output cycles kaput (clock) gene, which is expressed in the SCN.4

Migraine. There is also a circadian pattern for many who have migraine.5 When a nocturnal migraine strikes, it is often at the end of sleep—unlike hypnic headache or CH, which both tend to occur earlier. Approximately half of migraines begin between 4:00 am and 9:00 am, waking the individual with a headache that is often of maximal intensity and centrally sensitized and, thus, refractory to oral triptans. Injectable triptans are first-line treatment for these migraine attacks.

Bruxism. With or without temporomandibular joint (TMJ) disorder, bruxism (teeth grinding) may occur during sleep and cause nighttime headaches. Pain is usually dull moderate intensity bilateral and centered about the temples, midface, and forehead. Treatment includes nonsteroidal anti-inflammatories (NSAIDs), muscle relaxants, and the use of nighttime mouth guards. If masseter hypertrophy is detected, onobotulinumtoxinA injections are often useful.

Cervicogenic Headache. Frequently worse at night, cervicogenic headache wakes the individual with neck pain radiating to the occiput and anteriorly to the forehead and is caused by mechanical neck position during sleep. A comfortable, supportive pillow is helpful.

Other Primary Headaches. Tension-type headache, hemicrania continua, and the trigeminal autonomic cephalalgias SUNCT and SUNA may also occur in the night. Idiopathic intracranial hypotension (pseudotumor cerebri) headache may be worse when lying down and can disrupt sleep. Less intuitively obvious, spontaneous intracranial hypotension may wake the affected individual in the wee hours of the morning (Linda Gray Leithe, MD, personal communication).

Fortunately, Margaret and Martin were able to see the same headache specialist neurologist, an amiable woman located in the city a few miles north of their home. She elicited a comprehensive headache and medical history from each of them and did a thorough physical and neurologic examination. Because their headaches were of new onset after age 50, MRI scans were ordered and were, thankfully, unremarkable.

The neurologist diagnosed Margaret with hypnic headache. She discussed treatment options based on available scientific literature. She told Margaret that medications that alter circadian rhythm such as lithium, melatonin, and caffeine are often helpful, and that indomethacin might help if those did not. Margaret chose caffeine, in the form of 4 ounces (a half cup) of black coffee, taken just before bed. Initially doubting her neurologist’s assertion that the caffeine would not keep her up, Margaret was pleasantly surprised when the night after her first dose, she slept like a baby and woke—headache free—to the sun dappling through her curtains with the music of birds fussing outside her window.

Martin had a rougher time. Correctly diagnosed with cluster headache (CH), he began an oral steroid taper and the calcium-channel blocker verapamil, but the former quickly upset his stomach and the latter precipitously slowed his already sluggish bowels. Sumatriptan injection caused severe chest and neck pain even at the lower 3 mg dose. Zolmitriptan nasal spray was better tolerated but took over 45 minutes to become effective.

Fortunately, his neurologist had other tricks up her sleeve. On his next visit she performed an occipital nerve block and started treating Martin with the newly approved CH agent galcanezumab, at 300 mg injected subcutaneously monthly during the cluster cycle. She prescribed high-flow oxygen via a nonrebreather face mask to use at attack onset.6 Martin found this regimen highly effective, so he alternated high-flow oxygen with the zolmitriptan nasal spray. Soon enough, his cluster attacks were way down and he had effective tools to knock them out. He just had to be quiet when pain woke him from sleep, so that Margaret, who no longer used sleep aids and took only her black coffee each night, slept the sleep of angels at his side.

Martin’s hopes were bolstered by the neurologist telling him that he would cycle out of his headache disorder soon enough, and like Margaret, sleep soundly at night. He was looking forward to this. When the sun came up following his first headache-free night, he would celebrate. Maybe take Maggie to the movies, or to one of their beloved antique car shows. When the headaches finally broke, he knew, the world would be waiting. The golden years, all theirs, stretched out before them like an endless vista on a country road.

There are many headaches that may occur at night, some of which can be intensely painful and intensely regular, preventing sleep and affecting quality of life significantly. Proper diagnostic workup is essential to determine which headache is causing bumps in the night.