Cladribine is an effective oral treatment for multiple sclerosis with potential for long-term remission.

The introduction of human Interferon β-1b for multiple sclerosis (MS) treatment introduced a new era of disease-modifying therapies (DMTs).1 Self-injectable therapies (ie, interferons and glatiramer acetate) dominated the treatment landscape for the next 2 decades, until the first oral DMT, fingolimod, was introduced in 2010. This was followed by the development of infusion (intravenous [IV]) DMTs, and there now are over 20 DMTs for MS. Most DMTs for MS were developed for relapsing MS (RMS); however, more treatments for the primary and secondary progressive forms of MS have emerged.2,3 Cladribine is a recent introduction, with indications for both RMS and active secondary progressive MS (aSPMS).4

Cladribine selectively depletes lymphocytes constituting the adaptive immune system, which has largely been implicated in the pathogenesis of MS. Cladribine-induced lymphopenia is dose dependent and can be regulated by appropriate dosing while minimizing the hazard to host defenses against infections and malignancies.

Discovery, Pharmacology, and Mechanism of Action

Adenine deaminase (ADA) deficiency was discovered in 1972 as an autosomal dominant disorder in 2 unrelated girls with severe combined immunodeficiency.5 The girls were relatively unaffected, except for profound lymphopenia. Their innate immune systems were intact. The cause of selective lymphopenia was identified to be an accumulation of deoxyadenosine in lymphocytes in the absence of ADA, causing apoptosis of lymphocytes. The unique susceptibility of only lymphocytes to the toxic effects of deoxyadenosine prompted investigations and synthesis of 2-chloro deoxyadenosine (2-CdA), which mimics the toxic effects of deoxyadenosine seen ADA deficiency.6 A synthetic purine analogue, 2-CdA, also known as cladribine or leustatin, is a prodrug that needs to be triphosphorylated into its active form by the cellular kinases deoxycytidine kinase (DCK). If other cells have the ability to dephosphorylate cladribine with the phosphatases 5’-nucleotidase (5’-NTase), toxic accumulation of cladribine occurs in lymphocytes and leaves the other cells unharmed. Minimal expression of 5’-NTase in lymphocytes, accounts for the unique susceptibility of the lymphocytes, which can robustly phosphorylate but only minimally dephosphorylate cladribine. Cladribine has been studied and approved for the treatment of lymphoid malignancies, including hairy cell leukemia (HCL)7 and autoimmune disorders, including MS.8

Cladribine enters all cells via the nucleotide transporter protein. The ability of a cell to phosphorylate and dephosphorylate cladribine determines whether a toxic effect occurs (Figure). The ratio of DCK to 5’-NTase determines if enough activated cladribine accumulates to induce apoptosis. Lymphocytes are uniquely vulnerable because there are significantly lower 5’-NTase levels compared with DCK.9 The CD3+ T cells remain suppressed longer than CD19+ B cells, and CD4+ cells are affected more than CD8+ cells. The NK cells decrease, but recover rapidly, demonstrating minimal effects of cladribine on cells of the innate immune system.8 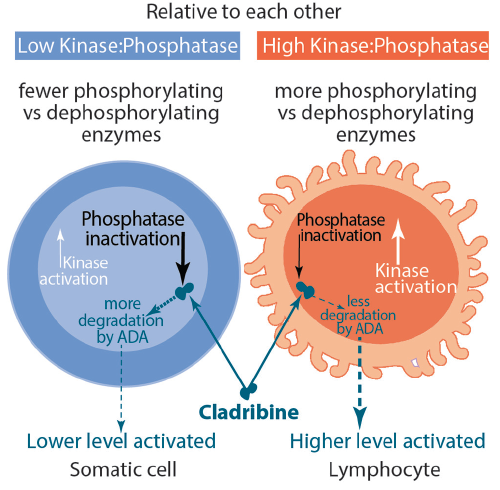 In 2003 an IV formulation of cladribine received Food and Drug Administration (FDA) approval for the treatment of HCL.6 Subsequently, an oral tablet formulation was developed, and in 2005 clinical trials of oral cladribine for treatment of RMS were initiated.

After 2 years of treatment, approximately 55% of people with MS who were treated with cladribine had no oligoclonal bands on analysis of cerebrospinal fluid (CSF).10 Approximately 25% of the plasma concentration of cladribine reaches the CSF.11 The ability of cladribine to cross the blood-brain barrier may have therapeutic effects on lymphocytes that have migrated to the central nervous system (CNS), although it is unknown if there is a direct effect on the reduction of meningeal lymphoid follicles after treatment with cladribine.

Cladribine was approved by the FDA in the US and globally for treatment of RMS and aSPMS.4 This approval was based on safety and efficacy information from clinical trials of IV and oral formulations of cladribine, including a pivotal phase 3 trial with an extension period, a clinical trial for treating clinically isolated syndrome (CIS) and a trial of cladribine as adjunctive treatment to interferons.

With the discovery of the oral formulation, suitable oral doses over a 2-year period were estimated. Based on the bioavailability of oral cladribine at 40% of the IV dose, doses of 3.5 mg/kg and 5.2 mg/kg as 2-year cumulative doses administered over 2 cycles each year for 2 years, were designed for a clinical trial that enrolled 1,326 participants with RMS who had at least 1 relapse in the prior year.12 The primary endpoint was annualized relapse rate (ARR) at 96 weeks with key secondary endpoints including freedom from relapses and time to 3-month confirmed disability progression (CDP). After the initial trial, it was evident that the 5.25 mg/kg dosing offered no advantages over the 3.5 mg/kg dose and so was not continued into the extension study. Treatment with oral cladribine 3.5 mg/kg significantly reduced disease activity versus placebo (0.14 vs 0.33, P<.001) for a relative 57.6% reduction of ARR. More participants treated with cladribine vs placebo were relapse-free at week 96 (80% vs 61%, P<.001 and 81% vs 63%, P<.05]). Additionally, time to first relapse was significantly longer for participants treated with cladribine vs placebo (hazard ratio [HR] 0.44, 95% CI, 0.34-0.58; P<.001).

In the pivotal phase 3 trial, treatment with cladribine tablets 3.5 mg/kg reduced the mean number of gadolinium-enhancing lesions on MRI by 86%. Reductions were also observed in the mean number of active T2-weighted lesions and combined unique lesions (new T2 and Gd+ lesions) when compared with placebo at 2 years. Overall, 60% of the participants treated with cladribine were free of disease activity on MRI lesion at 2 years vs 35.5% of those treated with placebo (odds ratio [OR] 5.52, 95% CI, 3.68-8.27; P=.0001). Empiric analysis revealed a reduction in brain atrophy rates with cladribine treatment vs placebo (0.77% vs 0.95%, P=.02) based on the percentage of brain volume change over 6 to 24 months.13 Notably, in the general study population brain atrophy rates correlated significantly with the cumulative probability of disease progression. In other words, those with the lowest brain atrophy rates showed the highest probability of no further disability progression at 2 years.

A post hoc analysis of data from a pivotal study assessed no evidence of disease activity (NEDA-3), defined as no relapse, no progression, and no new lesions on MRI. At 6 months, 1 year, and 2 years, the proportions of patients achieving NEDA were 67%, 54%, and 44%, respectively, in those treated with 3.5 mg/kg of cladribine, compared with 39%, 24%, and 16%, respectively, in those treated with placebo (P<.0001 at each time point).14 The proportions of participants who achieved NEDA were higher in subgroups with high disease activity (HDA).15 Exploratory post hoc analysis suggested NEDA status was durable in participants treated with cladribine 3.5 mg/kg.

A prospective clinical trial of cladribine for people with aSPMS has not been undertaken, although aSPMS is an accepted indication for use. This was based on a post hoc analysis, in which Expanded Disability Status Scale (EDSS) scores were used as surrogates for aSPMS. Analysis of a subgroup in a phase 3 pivotal trial who had a baseline EDSS score 3.5 or more showed significant reductions in relapses and disability; 48.6% of this subgroup treated with cladribine met criteria for NEDA compared with 17.3% of those given placebo (P<.0001).16

Although there was a successful clinical trial for CIS,17 cladribine generally is not recommended for this indication, because cladribine is “generally recommended for patients who have an inadequate response or are unable to tolerate an alternate therapy for MS” and not as first-line therapy.4

Cladribine treatment of MS is recommended for only 2 years. Safety or efficacy in year 3 and 4 is not established. However, in extension studies, it was clear that participants were stable without additional treatments in years 3 or 4, for 4 years or longer. Participants who were again randomly assigned to receive placebo after 2 years of cladribine treatment remained free of relapse or progression.18 This could suggest that autoreactive cells are eliminated during the 4 cycles of cladribine treatment over 2 years. This concept of immune reconstitution, namely, removal of autoreactivity and establishment of immune tolerance is novel, unlike current MS therapies, where life-long treatment is recommended.19

Herpes zoster was the most common serious infection seen and correlated with the degree of lymphopenia. Screening for tuberculosis is recommended before starting therapy because 3 cases occurred in endemic areas after cladribine treatment. There have been no cases of progressive multifocal leukoencephalopathy (PML) in people treated with IV or oral cladribine.4

Concern for malignancies delayed approval of cladribine in the US after the first submission to the FDA in 2010. There were 10 malignancies in the group treated with cladribine vs 1 skin cancer and 2 early cervical cancers in the group treated with placebo.12 Safety studies have since alleviated these concerns because it became evident that the malignancies seen in the treatment arm and the relative absence of malignancies seen in the placebo group were chance occurrences. In the US, but not Canada or Europe, there is a warning for malignancy in the package insert.4 Routine age-appropriate screening for malignancies are recommended prior to the use of cladribine. A propensity to autoimmunity was not observed in any of the trials.

The safety and efficacy of cladribine offer a new effective oral treatment for RMS and aSPMS with a potential for long-term remission after 2 years of treatment. How long that remission may be, will be determined on an individual basis during the follow-up period. Individuals must be followed at least annually for immune reconstitution, recurrence of the disease, and safety issues to establish long-term safety and efficacy data. Although cladribine is not recommended as first-line therapy, use earlier in MS may be associated with better outcomes including no further relapses, progression, or new MRI lesions. An additional question that will need to be answered in practice is that of retreatment of patients with disease outside the 4-year window following the first cycle of medication.