Studies are underway that will potentially improve management and outcomes to reduce mortality from intracerebral hemorrhage.

Epidemiology and Standards of Care

Stroke is the third leading cause of death worldwide. Of all strokes, approximately 87% are ischemic, 10% are from intracerebral hemorrhage (ICH), and 3% are attributable to subarachnoid hemorrhage (SAH).1 Globally, both the number of people experiencing ischemic and hemorrhagic stroke and the number of deaths from stroke increased significantly between 1990 and 2010.2 The incidence and mortality from hemorrhagic stroke—including ICH and subarachnoid hemorrhage—was reduced by 19% and 38%, respectively, in high-income countries. However, both increased in low- and middle-income countries over the same time period.2 According to the Global Burden of Disease study, deaths from stroke increased between 2007 and 2017.3 There are, however, conflicting data among studies with some showing an increased incidence, others a decreased incidence, and still others showing a stable incidence.4 The case fatality rate of ICH at 1 month and 1 year is 40% and 54%, respectively, although large retrospective studies in the US and the United Kingdom show decreased fatality from ICH over the past 17 years.5 It is hypothesized that decreased incidence and fatality of spontaneous ICH (ie, primary intracerebral hemorrhage in the absence of an underlying causal lesion) in some countries may be a result of better hypertension management. This is potentially countered, however, by increased use of antithrombotic therapy and increased hemorrhage related to amyloid angiopathy.4,5 Recent guidelines for managing care of individuals with spontaneous ICH from the European Stroke Organisation6 and the American Heart Association/American Stroke Association7 note that people with ICH should initially be monitored with care managed in neurologic intensive care units or dedicated stroke units that provide frequent monitoring of vital signs, cardiac monitoring, glucose monitoring, and neurologic assessments. Under certain clinical circumstances, intracranial pressure monitoring and cerebral perfusion pressure monitoring may be indicated. The specialized nursing care in these units allows for prevention of complications such as aspiration, venous thromboembolism, and respiratory failure.

For persons who present with ICH and an elevated International Normalized Ratio (INR), who have been taking vitamin K antagonists (VKA), it is recommended to withhold VKA and give therapy to replace the vitamin K-dependent factors and correct the INR. For those that have a severe coagulation factor deficiency or severe thrombocytopenia, factor replacement therapy or platelets should be given.7 Acute lowering of systolic blood pressure to 140 mm Hg should be initiated in those who present with elevated systolic blood pressure between 150 and 220 mm Hg if there are no contraindications to doing so.7

Intravenous alteplase is now considered standard of care for people with acute ischemic stroke who qualify for treatment and present within 3 hours of symptom onset and up to 4.5 hours in a select group.8 Mechanical thrombectomy with approved devices is recommended for anterior circulation large-vessel occlusion related ischemic stroke presenting within 6 hours after symptom onset.9 A meta-analysis of several trials10 supports benefit of mechanical thrombectomy within 7 hours of symptom onset. This window was extended to stroke presenting between 6 and 24 hours11 from time of onset in individuals fulfilling the inclusion criteria for the DEFUSE-3a and DAWNb clinical trials.12,13

With these recent advances in ischemic stroke, we were interested in the state of clinical trial research in ICH, particularly what is being developed for acute ICH treatment and what might potentially improve outcomes. We searched the publicly available data within ClinicalTrials.gov database, which contains information regarding privately and publicly funded clinical trials.14 We searched the term intracerebral hemorrhage and selected studies that were recruiting, not yet recruiting, and active but not recruiting. The data used for this review was obtained from a search of ClinicalTrials.gov database run on May 8, 2019. 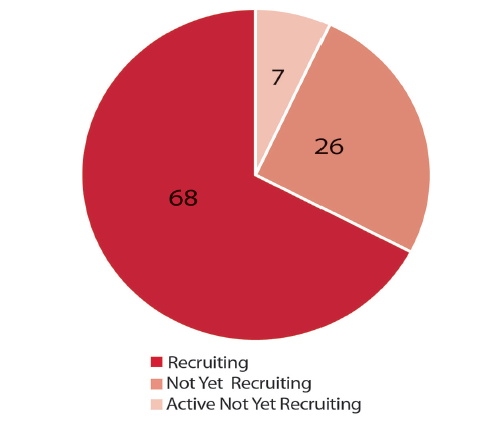 Although most studies had the phase of study blank or not applicable, of those that did list a study phase, an approximately equal number were early (phase 1 or phase 2) or late (phase 3 or phase 4) (Figure 2). Studies for which the phase was noted as not applicable were those for which the intervention was marked as device, procedure, or other category. 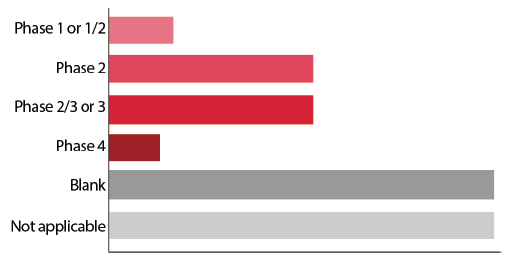 Figure 2. Phase of Trials in Progress for Intracranial Hemorrhage.

The type of intervention was noted in all but 9 trials (Figure 3), most of which were either drug or device trials. Other trials are observational or used a monitoring platform such as MRI, blood pressure, or neuropsychologic assessment. The categories of procedure and device have some overlap in that both include interventions (eg, intracerebral catheter placement, early hematoma evacuation with minimally invasive devices, and decompressive craniectomy). 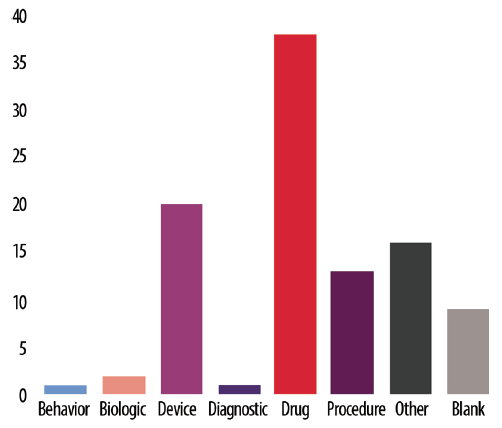 We were most interested in the acute treatment of ICH and so focused next on trials that enrolled participants in the acute stage of the event.

Pharmacotherapeutics. In the 38 studies where the intervention was categorized as a drug, 7 studies were for premature infants with intraventricular hemorrhage. Another 11 studies enrolled participants as early as 1 day after symptom onset to as long as 4 months after symptom onset. Several of these 11 trials focused on the use of antithrombotic agents in individuals who may have been taking those agents to treat atrial fibrillation or vaso-occlusive disease before experiencing ICH. The research question for these studies was the risk-benefit profile of the continued use of antithrombotic agents for prevention of further vascular events in people who had ICH while taking those drugs.

The remaining 20 trials in the drug intervention category planned to enroll or were enrolling adults for whom treatment would be started when the individual was in the acute phase of hemorrhage. In general, the protocols required participants to be enrolled within 24 hours of symptom onset, but more frequently the time window for enrollment was within 12 hours of symptom onset. Study drugs include medications to control or limit hypertension, hematoma expansion, or brain inflammation after ICH. Outcome assessments include functional outcome measures such as the modified Rankin Scale (mRS), the National Institute of Health Stroke Scale (NIHSS), Glasgow Coma Scale, Glasgow Outcome Scale, and the Montreal Cognitive Assessment (MoCA), as well as other quality-of-life measures. Assessment of the hematoma volume and edema were also being collected in a few of the studies.

Devices. In these trials, devices were being used either during the acute phase, within a few hours of symptom onset, or during rehabilitation. Of the 20 device trials, 4 were enrolling infants with intraventricular hemorrhages. A single device was being developed to differentiate hemorrhage from infarction during the acute phase, and another was a device for noninvasive monitoring to detect intracranial changes (eg, hematoma size, cerebral edema, or mass effect). Devices used during the acute phase of the event included a device for minimally invasive endoscopic aspiration of ICH, a device inducing remote ischemic conditioning, and devices for measuring blood pressure, preventing fever, and continuously monitoring glucose. Functional outcome measures included mRS, mobility scales, and quality-of-life scales. Other measures were dependent on the specific devices and physiologic parameters such as temperature and cardiovascular effects. Devices are also being developed for use during rehabilitation and include transcranial stimulation and its effect on language recovery.

Procedures. Most of the 13 studies listing procedure as the intervention enrolled patients in the acute period after ICH. The studies include minimally invasive intervention, 1 with stereotactic robot assistance, and 1 comparing neuroendoscopic hematoma removal to stereotactic hematoma aspiration.

Other. Of the 16 studies listing other in the intervention category, most were not interventional, but rather observational without intervention to follow the natural history of the disease and the standard of care. The outcome measures for these studies included mortality, neurologic, and neuropsychologic assessments. A single study evaluated cerebrovascular reactivity using MR techniques, and another evaluated intensive control of several variables including blood pressure, glucose, pyrexia, and reversal of anticoagulation in the functional recovery as measured by mRS, NIHSS, and quality-of-life measures.

Biologics. Studies categorized as having a biologic intervention were noted to have treatment as the primary study purpose; these are planning to enroll participants in the acute period (within 2 to 72 hours of ICH). Biologics being studied included intravenous injections of recombinant activated factor VII or mesenchymal stem cells. Outcome measures include incidences of treatment emergent adverse events and functional scales such as the NIHSS or the mRS, quality-of-life scale, and hematoma volume in the phase 3 study. Planned enrollment ranged from 12 people in a phase 1 study to 860 people in the phase 3 study.

There are an equal number of clinical trials for ICH in earlier phases as in later phases of development, and outcome measures are comprehensive and relevant to function and quality of life. Although interventions using a drug or a device are the most common category of treatment, the development of other procedures, biologics, and behavioral therapies are also being studied for the treatment of ICH. Collectively these studies address unique aspects of managing ICH, from risk-factor modification and neuroprotection to minimally invasive hematoma evacuation, control of hematoma inflammation, acute blood pressure monitoring, and rehabilitation. Hopefully, the results from these studies will add to the guidelines in managing ICH and lead to a decrease in the overall disease burden and mortality.

b Clinical mismatch in the triage of wake up and late presenting strokes undergoing neurointervention with Trevo (NCT02142283).

KBK and KO are both employees of Parexel International.