Imaging studies can differentiate Parkinson’s from other causes of parkinsonism.

Although Parkinson’s disease (PD) remains a clinical diagnosis, imaging studies are an important ancillary test for differential diagnosis of movement disorders. Imaging studies may be used to rule out structural and other causes of parkinsonian symptoms. Single-photon emission computed tomography (SPECT) scans using labeled tracers for dopamine transporters (DaTs) can also be used to confirm parkinsonism or differentiate PD from secondary causes of parkinsonian motor symptoms. Finally, imaging studies are being used in research to better understand the pathophysiology of PD and elucidate causative mechanisms that could be therapeutic targets in the future.

The core clinical signs of PD include resting tremor, bradykinesia, rigidity, and postural instability. Most patients also experience nonmotor symptoms such as cognitive and emotional changes (apathy, depression, cognitive deficits), dysautonomia, sleep disorders, and sensory disturbances. Many experience prodromal nonmotor symptoms such as anosmia, depression, constipation, and REM sleep behavior. Clinical subtypes of the disease have been identified, including tremor dominant and postural instability gait difficulty (PIGD). Atypical features (eg, rapidly progressive disease course, upper motor neuron signs, and poor or unsustained response to levodopa therapy) may be clues that there are other etiologies that can be differentiated with imaging studies.1 Structural brain imaging (eg, CT or MRI) is frequently ordered to investigate these cases. In addition, SPECT imaging with DaT may be useful to confirm central nervous system (CNS) dopamine signaling deficiency in select cases (Figure 1). On DaT scans, normal radiotracer uptake in the striatum (caudate nucleus and putamen) forms 2 crescent-shaped regions of activity, mirrored around the median plane. In contrast, in PD, there is asymmetrically decreased activity in the putamen, often with preserved uptake in the caudate nucleus.2,3 A DaT scan is FDA approved for differentiating essential tremor from PD, and is also frequently useful for differentiating drug-induced parkinsonism from PD. 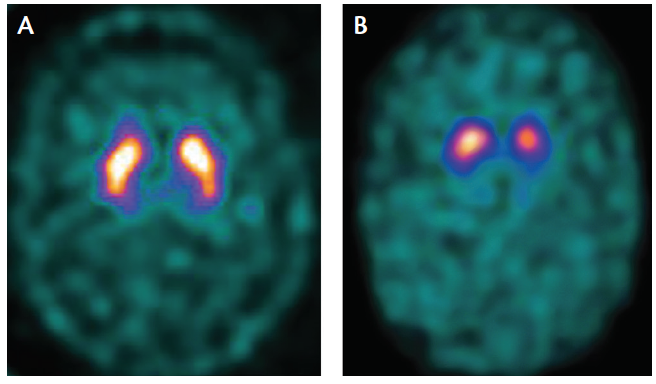 Figure 1. Dopamine Transporter (DaT) Scan Using Single-Photon Emission CT (SPECT). In a person without presynaptic dopamine transporter (DaT) loss, tracer activity appears uniform throughout the bilateral striatum (caudate nucleus and putamen), which has a “comma-shaped” appearance on axial images (A). In a person with Parkinson’s disease, activity is asymmetrically reduced in the putamen (posterior portion of the comma) with preserved but lower than normal uptake in the caudate nuclei (B).

Parkinsonian signs, especially relatively symmetric bradykinesia and gait impairment, can be caused by subcortical white matter disease and lacunar infarcts affecting the striatum and its connections.4 Imaging can verify the presence of cerebrovascular disease (CVD) to support this diagnosis but is not definitive because CVD is a frequent comorbid condition with PD.

Corticobasal degeneration (CBD) can mimic PD, but higher cortical dysfunctions (eg, apraxia, cortical sensory loss, myo-clonus, aphasia, and alien limb phenomenon) are present in the most typical form. Levodopa therapy is not effective for CBD. Asymmetric atrophy in the frontal and parietal lobes on structural brain MRI supports the diagnosis.

In multiple system atrophy, cognition is usually preserved, and a combination of parkinsonism, dysautonomia, and cerebellar ataxia are present. Brainstem changes and the “hot cross bun” sign on MRI support a diagnosis of the cerebellar variant of MSA (MSA-c, formerly olivopontocerebellar atrophy; Figure 2).5 A hyperintense rim along the outer edge of the putamen on T2-weighted images supports MSA-p (striatonigral degeneration).

Figure 2. MRI Signs of Parkinson’s Disease Mimics. Several neurodegenerative diseases can cause parkinsonian motor symptoms. Although these cannot be definitively diagnosed or differentiated from Parkinson’s disease (PD) with MRI, there are radiologic hallmarks that can be useful when combined with the clinical examination and other diagnostic tests. In normal pressure hydrocephalus, the ventricles are enlarged (A). In progressive supranuclear palsy (PSP), the “hummingbird sign” can be seen (B). In multiple system atrophy, the “hot cross bun” sign may be seen in the brainstem (C). Image B courtesy of Dr. Gustavo Aguiar. Radiopaedia.org. Image C courtesy of Dr. Aruna Pallewatte. Radiopaedia.org.

Parkinsonian symptoms of progressive supranuclear palsy (PSP) tend to be bilateral. Eye movement abnormalities are usually present, and tremor is usually absent. People with PSP present with early loss of postural reflexes, leading to frequent falls. On MRI, PSP diagnosis is supported by the “hummingbird sign” indicating midbrain atrophy (Figure 2). The midbrain to pons ratio can also be used to support the diagnosis of PSP.6,7

Although deep brain neoplasms are rare, tumors invading the basal ganglia can cause parkinsonian motor symptoms. The presence of neoplasms can be ruled out with contrast-enhanced brain MRI.8,9

Some neurotoxins and drugs can cause parkinsonian motor symptoms. In the case of pesticide or heavy metal exposure, brain MRI may show high signal in the globus pallidus.1

Normal pressure hydrocephalus (NPH) is a rare condition that can cause gait disturbances similar to those of PD, although the gait tends to be wide based with externally rotated feet. Clinically, incontinence and cognitive impairments are also present in NPH. On MRI imaging, NPH can be differentiated by enlarged ventricles (Figure 2), although brain atrophy can produce a similar-appearing “hydrocephalus ex vacuo.”1

Other positron emissission tomography (PET) and SPECT tracers that are being used in research studies target elements of dopamine biosynthesis and storage, serotonin and acetycholine receptors, and cerebral deposits of amyloid β and tau. Development of a tracer for α-synuclein, the pathologic hallmark of PD, would be a revolutionary advance for PD research but is technically difficult because of the low abundance and intracellular location of α-synuclein deposits in PD relative to amyloid in Alzheimer’s disease (AD).10

Using functional imaging sequences, abnormal resting blood flow and alterations in regional activation have been seen in response to a task that improves with levodopa treatment in people with PD. Structural sequences have been used to show white matter changes and lower cortical thickness in PD. Diffusion tensor imaging (DTI) measures water diffusion, which tends to move preferentially along nerve fiber tracts in the brain. With DTI, it is possible to create maps of axonal tracts termed the structural connectome. Changes in DTI signal have been described in prodromal stages of PD and AD that may be sensitive to early cellular alterations. For example, in rapid eye movement (REM) sleep behavior disorder, known to confer high risk for the future development of PD, changes in the brainstem white matter have been described.11 The nature of these changes seen on DTI is not disease-specific, although the location of changes may prove to be.

Conventional MRI is not yet diagnostic for PD but can be useful in differentiating PD from secondary causes of parkinsonian symptoms. The use of DaT scanning has proven to be of clinical value.12 As more data are collected and new imaging modalities are developed, the potential for clinical useful biomarkers for diagnosis of PD and tracking disease progression remains high.

School of Medicine and Public Health