Gene therapies can be safely delivered; the questions of when, where, and why to use them remains.

Just as an increasing number of genetic causes of central nervous system (CNS) diseases are being revealed, and genetic testing becomes more widely available, the potential for therapies targeting DNA or RNA is also growing. In addition to treating diseases caused by a mutation in a single gene, termed monogenic diseases, gene therapy can also address polygenic diseases caused by multiple genes and environmental factors. If aspects of the molecular pathophysiology are understood, specific proteins involved can be modulated with gene therapy. Over the last decade, multiple clinical trials have shown that these therapies can be safely implemented in people with Parkinson’s disease (PD). This article reviews how these therapies are intended to work, how they can be delivered, and which have shown promise of efficacy.

In general, gene therapy can be classified into 2 categories:

1. addition or replacement of a gene function, and

Adding a gene can be done by inserting a gene into a vector that will carry the gene into the nucleus of a cell of interest. Most often, the replacement gene is delivered by placing it into a viral vector, which is engineered to contain the intended gene and only a small amount of viral DNA necessary for packaging. This engineering renders the virus nonreplicative, since the viral genes necessary for virion production are absent. The advantage of viral vectors is efficient delivery of DNA. The disadvantage is that the size of the gene that can be carried by a viral vector is limited.1

When genes are too large to be carried by known viral vectors or when only temporary gene expression is desired, plasmids—a circular piece of DNA—can be delivered, but this process is less efficient and requires a mechanism to introduce the plasmid into the cell, such as membrane disruption or the use of liposomal microparticles.2

Deleting a gene function is a bit more complex because current tools (eg, CRISPR-Cas9) are inefficient and may result in unintended off-target effects. A more reliable technique is to reduce (knockdown) expression of the gene product, which can be achieved with RNA interference therapies that use a cell’s own machinery for regulating protein expression or with antisense oligonucleotides (ASO).3-8

The ASOS are short strands of DNA that bind to complementary RNA and can be used for gene knockdown or to manipulate gene expression by altering RNA splicing. For spinal muscular atrophy (SMA), the Food and Drug Administration (FDA)-approved ASO nusinersen is used to manipulate splicing of survival of motor neuron 2 (SMN2). Binding of nusinersen to SMN2 RNA results in the inclusion of exon 7 that renders the SMN2 protein much more stable. Enhanced SMN2 expression compensates for the missing or mutant SMN1 that causes SMA.4-6 (Replacement of SMN1 with a viral vector carrying the SMN1 gene is also FDA approved for treatment of children, age 2 years or less, with SMA).9 Other indications for ASOs are also being developed. Clinical trials for HD are using ASOs to knockdown production of the toxic huntingtin protein.10 Safety has been demonstrated, and further trials are planned.

From a clinical standpoint, intravenous delivery of gene therapy is the simplest and there are viral vectors that can pass from the bloodstream into the CNS.1 A subtype of the adeno-associated viral (AAV) vector is the most commonly used of these both because it does not generate an immune response and because it does not integrate its DNA into the genome, thereby eliminating the potential for creating insertional mutations. Furthermore, the unmodified virus is not pathogenic in humans. The disadvantages of intravenous delivery include that entry into the CNS is inefficient and can result in patchy areas of gene expression where it was intended; additionally, systemic expression, which may not be desirable, is a consequence of intravenous delivery.

Infusion directly into cerebrospinal fluid (CSF) via lumbar puncture (intrathecal) or infusion into the cisterna magna has the advantage of restricting delivery to the CNS, and expression occurs more consistently throughout the CNS. However, this is a more invasive procedure and can be difficult to perform in some individuals because of anatomic changes resulting from the disease being treated.4-6,11,12

More commonly used in clinical trials is direct injection into the brain,13-23 which is even more targeted, delivering gene therapy to specific structures within the CNS accurately and safely. Most trials have used frame-based stereotactic neurosurgery and preoperative imaging to deliver gene therapy. Most recently, the ClearPoint system is being used with MRI-compatible materials for stereotactic localization with intraoperative imaging so that injection into the targeted structures can be visualized directly if the therapy is labeled with contrast agent. This also allows visualization of how the material is distributed after injection so that rather than injecting a specific volume, a specific and well-defined area can be targeted.17

Most gene therapy trials in PD have used the AAV vector because it is nonimmunogenic, nonpathogenic (even as a wildtype virus), small, stable, and nonintegrating (ie, it doesn’t disrupt the native genome). The disadvantage is the limited carrying capacity of this vector. Consequently, in some trials, a lentivirus vector with larger nucleotide carrying capacity has been used instead. Lentivirus is also stable and nonimmunogenic; it does, however, integrate into the host genome, which carries the small risk of insertional mutation.

Enhancing Dopamine Synthesis. Because it is known that dopamine is deficient in PD and PD symptoms can be treated with dopamine replacement, proteins in the dopamine synthesis pathway have been an obvious target for gene therapy. Clinical trials have used gene therapy delivered to the striatum or putamen to increase levels of aromatic L-amino acid decarboxylase (AADC), the enzyme that converts L-DOPA to dopamine. Potentially, this could allow for lower doses of L-DOPA to be therapeutic. Decreasing L-DOPA doses may delay tolerance, reduce drug-induced side-effects, and limit troublesome “off” periods. Indeed, preliminary clinical trials have shown L-DOPA dose reductions and decreases in off time with enhancement of dopamine synthesis via gene therapy.13-17

Trophic Factors. Neurodegeneration in the substantia nigra pars compacta is a well-known pathologic feature of PD and in animal models, direct injection of glial-derived neurotrophic factor (GDNF) or the trophic factor neurturin has demonstrated efficacy in limiting neurodegeneration. However, no significant difference between treatment and control groups was observed in clinical trials of direct GDNF infusion. These negative results were possibly because of the limited amount of trophic factor delivered or the lack of growth factor persistence. Clinical trials are testing the possibility that gene therapy designed to deliver trophic factor genes that would result in the continuous production of trophic factors could be beneficial.

Neuromodulatory Gene Therapy. In this approach, the gene coding for glutamate decarboxylase (GAD), which converts glutamate (the major excitatory neurotransmitter) into GABA (the major inhibitory neurotransmitter) is delivered to the subthalamic nucleus (STN). This converts the STN from glutamatergic to GABAergic, correcting aberrancies in the basal ganglia circuit induced by dopamine depletion. It is thought to work analogously to deep brain stimulation (DBS) of the STN.

α-Synuclein. α-Synuclein is a hallmark of neurodegeneration in PD. There are preclinical α-synuclein knockout and knockdown studies underway, but this approach has not yet reached the clinical trial stage.

In 4 phase 1 or phase 1/2 clinical trials, the gene for AADC has been safely delivered to the striatum or putamen of human participants (Table).13-17 Although these studies had no control group, participants had decreased off time, decreased Unified Parkinson’s Disease Rating Scale (UPDRS) scores, and in 1 trial, a decrease in L-DOPA equivalent dose. There are 2 more phase 1/2 trials and 1 phase 2 trial for treatment with AADC gene therapy underway (Table).

In phase 1 and phase 2 trials that delivered gene therapy for increasing production of the trophic factor neurturin, the therapy was delivered safely.18-21 However, in the 2 of these trials that were powered for efficacy, there was no statistically significant difference between the control and treatment groups in the primary endpoint. There is 1 ongoing phase 1 trial of gene therapy to increase levels of GDNF (Table). 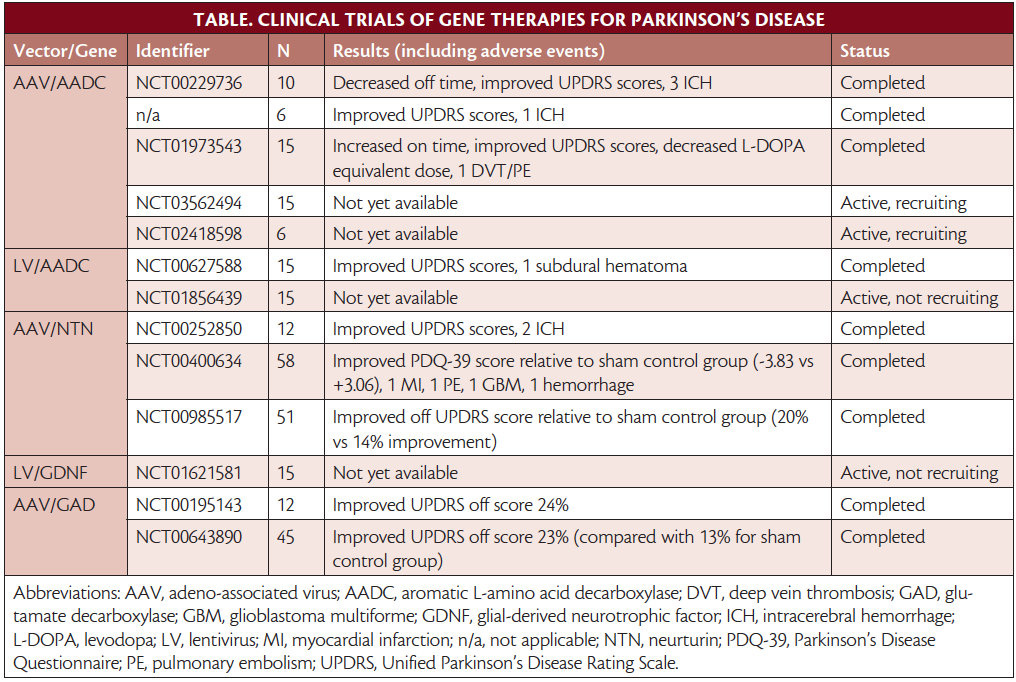 In the trials that delivered the gene encoding GAD to the STN to modulate basal ganglia activity, therapy was both safe and effective compared to sham treatment.22-23 However, the efficacy was not as robust as DBS,23 and the research was discontinued due to lack of funding.

Gene therapy is a burgeoning treatment for a number of neurologic disorders, and clinical trials have been conducted employing several gene therapy approaches for the treatment of PD. The majority have been open-label safety studies and results, therefore, must be interpreted with some caution. Taken together, the trials conducted to date provide evidence that gene therapy can be delivered safely. As current trials are completed and we learn more about delivery methods for gene therapy, there is great potential for these treatments to augment L-DOPA, possibly prevent neurodegeneration and/or eliminate the need for implantable neuromodulatory devices. Given the longevity of viral-based gene therapy approaches, these treatments will likely only require 1-time administration. The versatility of gene therapy promises to yield clinical advancements in the near future for PD and other disorders of the nervous system.