Ms. B, age 81, has diabetes mellitus and presented with new onset left facial droop that developed 2 days before presentation. She also had a holocephalic headache and noted leaning towards the right when sitting or ambulating. At presentation, her blood pressure was 198/89 mm Hg, and her blood glucose level was 543 mg/dL.

Findings of Ms. B’s noncontrast head CT were initially interpreted as showing an “acute right basal ganglia hemorrhagic infarction” (Figure 1A), and she was admitted to the neuroscience critical care unit for further monitoring. Her brain MRI findings revealed T1 hyperintensity of the right caudate, putamen, and globus pallidus, with gradient echo (GE) hypointensity of the bilateral caudate, putamen, and globus pallidus (Figure 1B and 1C). Ms. B’s imaging studies did not appear consistent with an acute hemorrhage and did not correlate with a prior history of strokes, current arterial or venous thrombosis, or a cranial neoplasm. Re-evaluation of these atypical images suggested a metabolic etiology.

Figure 1. Noncontrast CT head during the initial admission. Notable hyperdensity is revealed in the right head of the caudate, putamen, and globus pallidus (A). A T1-weighted MRI shows hyperintensity within the same structures, and gradient echo MRI shows bilateral involvement of associated structures (C).

Other notable ancillary data included hemoglobin A1C of 15.4%, β-hydroxybutyrate of 0.5 mmol/L, anion gap of 12, pH of 7.38, CO2 of 55 mm Hg, and bicarbonate of 32 mEq/L all consistent with a nonketotic hyperosmolar hyperglycem-ic metabolic state.

At this time, no adventitious movements were noted on examination nor upon interviewing Ms. B, her family or other medical staff. Over the course of her hospitalization, Ms. B’s facial droop resolved, her blood sugars normalized, and she was discharged to rehabilitation.

Approximately 1 month later, Ms. B was readmitted with acute onset uncontrollable movements of her right arm and leg, involuntary right shoulder shrugging, and involuntary head turning to the right. These movements could not be suppressed volitionally, were arrhythmic, low and high amplitude, and overall uncoordinated and distressing in nature. Semiology was consistent with hemiballismus-hemichorea. 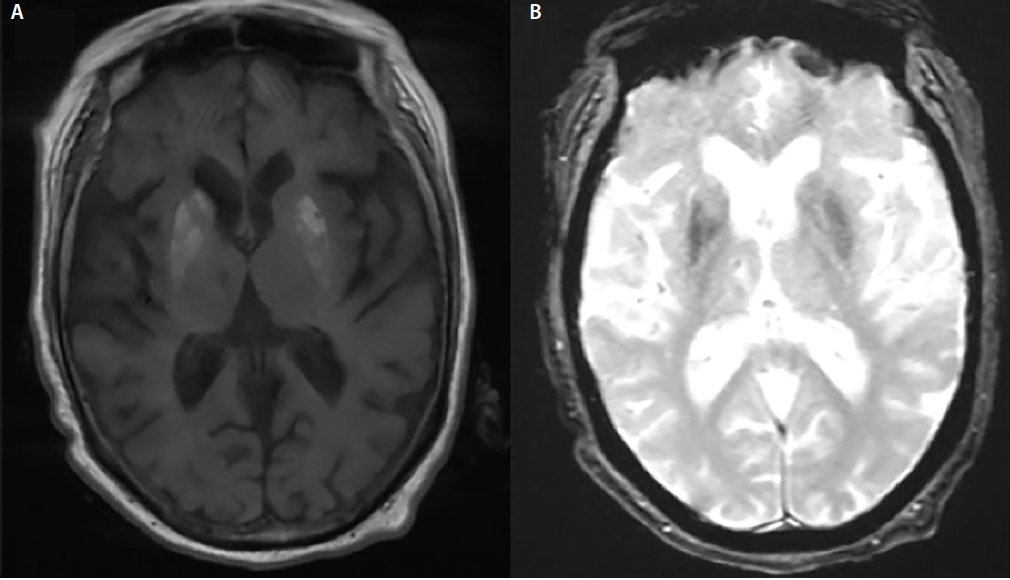 Although she insisted she had been adherent to her insulin treatment at home, Ms. B’s glucose level was 101 mg/dL.

Initially, our differential diagnosis for Ms. B’s acute chorea was broad. Her brain and vessel imaging findings were negative for vascular malformations, thromboses, neoplasms, and acute ischemic, or hemorrhagic, stroke. Ms. B was not taking any new medications and had not had any acute illnesses.

Rheumatologic conditions such as systemic lupus erythematosus (SLE) and antiphospholipid antibody syndrome (APS) were also considered. Ms. B’s examination, history, and laboratory values, however, lacked any skin manifestations, ulcerations, joint swelling, edema, prior thrombosis, photosensitivity, or cell-line abnormalities and her antinuclear antibody and rheumatoid factor findings were negative. She had no history of rheumatic fever as a child or young adult, making Sydenham’s chorea highly unlikely.

Given Ms. B’s age, neither chorea gravidarum nor pediatric autoimmune neuropsychiatric disorders associated with streptococcal infections (PANDAS) were a possibility.

Ms. B was later discharged to rehabilitation with uncontrollable right-sided movements still present. She was treated symptomatically with clonazepam, divalproex, haloperidol, valbenazine, and tight glucose control. A month after discharge from inpatient care to rehabilitation, the movements were still present but gradually decreasing in frequency with medical management.

Nonketotic hyperglycemia hemiballism-hemichorea (NK HB-HC) is a rare metabolic disturbance that can be seen among the elderly with poorly controlled diabetes mellitus. The disorder occurs after a hyperglycemic event. Individuals with NK HB-HC typically present with involuntary movements that have progressed gradually over days to weeks. The movements may be unilateral or bilateral depending on basal ganglia involvement and are associated with elevated blood glucose levels and a hyperosmolar hyperglycemic state. Typically, the involuntary movements begin a few days after or in conjunction with the insulting hyperglycemic event but have been reported to present up to 4 weeks later, even with adequate glucose control.1 Clinical features of NK HB-HC can persist after correction of hyperglycemia for up to 6 months.

Characteristic imaging findings include hyperintensity on T1-weighted MRI and hypointensity on GE/subtraction-weighted imaging (SWI) within the putamen most prominently, but also in other associated basal ganglia structures. Associated hyperdensities can be seen on noncontrast head CT, although more often than not these are associated with the acute hyperglycemia and not seen chronically in the months following the initial insult. People with NK HB-HC are frequently mistaken to have had a vascular injury such as an acute ischemic stroke or intracerebral hemorrhage given the acute clinical findings and peculiar imaging correlates.

The etiology of NK HB-HC has not been clearly defined. Suggested hypotheses include increased anaerobic metabolism due to intracellular acidosis, decreased cerebral blood flow due to hyperglycemia, increased extracellular glutamate accumulation with a decrease in available GABA, hyperglycemic cerebral edema, hyperviscosity within the basal ganglia, and microhemorrhages within the striatum.

Pathology reports have shown the presence of swollen reactive astrocytes and gliotic brain tissue within the putamen. Protein content within these reactive astrocytes may cause restricted diffusion and hyperintensity within the diffusion weighted MR series, as well as reactive vasodilation/microhemorrhages within the basal ganglia which can be seen on GE series. This combination of astrocytic swelling, extracellular protein accumulation, and cytotoxic edema may cause localized intravascular hyperviscosity and striatal microhemorrhages persist for months following damage. This could explain the delayed onset of HB-HC clinically with radiographic features proceeding.2

EF and JB report no disclosures.