Mr. I, age 31, has no significant past medical history and awoke with neck pain 2 hours before coming to the emergency department. He described his pain as sharp, rated 8 to 9 out of a possible 10 in intensity, and localizing to his neck and upper back without extremity radiation. During initial triage, some subtle weakness of the lower extremities was noted, but Mr. I remained ambulatory. While awaiting further assessment, he remarked that his legs became numb and his leg motor strength weaker.

Mr. I was sent for an emergent cervicothoracic MRI and findings showed a large dorsal epidural hematoma with severe spinal cord compression from C5 to T2 (Figure 1). His preoperative laboratory values including coagulation studies were unremarkable. Immediately after MRI, Mr. I was noted to have flaccid paralysis of his lower extremities, no rectal tone, and progressive upper extremity weakness with a sensory level at C5 (ASIA-A impairment, Table).

Figure 1. Axial (A) and sagittal (B) T2-weighted MRI shows a large compressive epidural hematoma (arrow) extending from C5 to T2. The spinal cord is notably displaced ventrally and severely flattened. 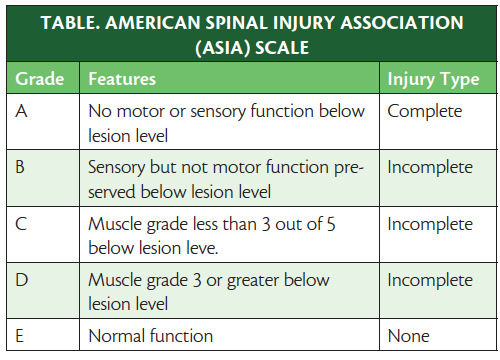 Mr. I was immediately taken for neurosurgical treatment. An arterial line was placed and mean arterial pressures were augmented to greater than 90 mm Hg to improve spinal cord perfusion. High-dose dexamethasone was started via intravenous infusion.

After initiating general anesthesia, cervicothoracic laminectomy was performed over the extent of the hematoma. A thick compressive acute epidural hematoma was found and completely evacuated. Heavy epidural bleeding from what appeared to be abnormal ectatic vasculature was also noted. The abnormal epidural vessels, which were the source of the epidural hematoma, were cauterized, completely resected, and sent to pathology for analysis. 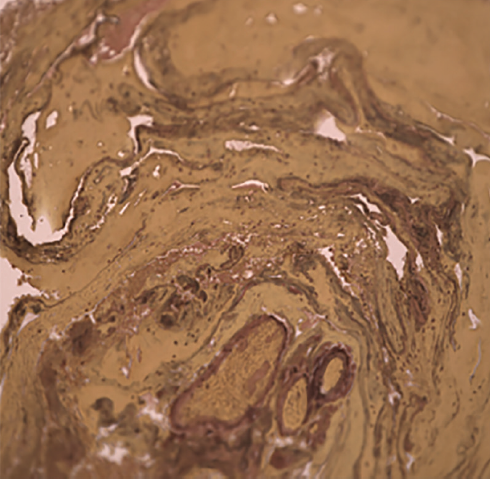 Mr. I was discharged home, fully ambulatory, on postoperative day 5. He subsequently was able to spontaneously void when his bladder catheter was removed several weeks later in the outpatient urology clinic.

Complete spinal cord injury (SCI) remains challenging to treat effectively, and recovery is limited in most cases.1,2 The incidence of SCI peaks in young adulthood and is higher among men. Trauma is the most common cause of nearly 13,000 cases reported in the US annually. This incidence rate is higher than in any other developed country.3 The degree of functional preservation below the level of the SCI is used to classify it as complete or incomplete (Table).

Although there are no definitive studies of the utility or outcomes of early decompressive surgery for individuals with ASIA-A acute spinal cord injury, it is clear that this approach has utility for some cases, as described.6 In the presence of extended paralysis (> 72 hrs), the benefit of surgical decompression is certainly more dubious. Some reports suggest that once functional paralysis has occurred, up to 50% of affected individuals remain bed or wheelchair bound after 3 months.7

As yet, there is no standardized management of acute complete spinal cord injury.8 Questions regarding optimal timing for spinal cord decompression surgery, utility of high-dose intravenous steroids, and the need for hemodynamic augmentation remain unanswered. As demonstrated by our case report, however, early decompressive surgery may be beneficial in some cases. Randomized trials and/or large registries are needed to generate more data to support clinical decision-making that is now largely based on anecdotal cases.