Epilepsy is one of the most common neurologic conditions affecting women. Care for women with epilepsy requires expertise not only in seizure treatment, but also an understanding of the unique challenges presented in the treatment of women with epilepsy. Epilepsy and antiseizure medications (ASMs) interact with aspects of health care specific to women, including sexual and reproductive health, menstrual cycle, contraception and family planning, teratogenesis, and pregnancy. Knowledge of these issues allows providers to identify and anticipate circumstances in which epilepsy and its treatment overlap with topics of importance to women.

The primary female reproductive hormones, estrogen and progesterone have proconvulsant and anticonvulsive effects, respectively.1 These properties are suspected to be involved in the clustering of seizures during various phases of the menstrual cycle, termed catamenial epilepsy and attributed to neuro-steroid effects of these hormones. Catamenial epilepsy is estimated to affect as many as a third of women with epilepsy.2,3

Several therapeutic efforts have been made to lessen catamenial seizures through nonhormonal and hormonal methods. Small studies investigating acetazolamide and clobazam reported improvement in catamenial seizure exacerbations.4-6 Menstrual cycle suppression with medroxyprogesterone acetate is associated with reduced seizure frequency, most likely because of hormone cycling inhibition.7 Using a similar rationale, uninterrupted combined hormone contraceptive (CHC)use and transient increases in daily ASM doses (25%-50% during the highest risk portion of the cycle) are suggested for catamenial seizure management.8 A double-blind trial assessing exogenous progesterone treatment did not affect catamenial seizure frequency. A subset of women in this trial who had a threefold or more seizure increase during the perimenstrual phase of their cycle, however, did have seizure reduction.9

More recently, clinical trials of a progesterone metabolite with neurosteroid effects, allopregnanolone, and its synthetic analog, ganaxolone, have suggested a unique strategy for treatment of women with epilepsy. This strategy includes neurosteroid replacement therapy for women whose seizures are exacerbated by falling progesterone with subsequent endogenous allopregnanolone levels during their menstrual cycle.10

Polycystic ovarian syndrome (PCOS) is associated with epilepsy treatment and can affect fertility. Studies note an association with valproate use,11-13 known to increase ovarian androgen synthesis.14 In a prospective clinical trial, women with epilepsy who initiated valproate treatment had higher serum testosterone levels, increased development of obesity, and irregular menses compared with women who initiated treatment with lamotrigine. In the same study, women who transitioned from valproate to lamotrigine had significant reductions in serum testosterone and body mass index (BMI).15

Epilepsy diagnosis and treatment do not appear to affect fertility. In the absence of an underlying fertility problem, such as PCOS, women with epilepsy do not appear to have differences in the likelihood of conceiving, time to conception, and live birth rate compared with women without epilepsy.16

Reduced sexual desire, problems with orgasm, vaginal dryness, dyspareunia, and overall dissatisfaction with sex life, occur at significantly higher rates in women with epilepsy vs those without epilepsy.17,18 Sexual dysfunction is independent of seizure frequency and enzyme-inducing ASM treatment.19 In contrast to other ASMs, lamotrigine is associated with improved sexual desire, pleasure, and orgasm.20

Safety of specific contraceptive methods for women with epilepsy is dependent primarily on the ASM regimen or other comorbidities, as outlined in the Centers for Disease Control Medical Eligibility Criteria for Contraceptive Use (Table 1).26 Steroid hormones are metabolized by the cytochrome P450 enzymes, and use of enzyme-inducing ASMs can decrease effectiveness of some systemic hormonal contraception, including pills, patches, or the vaginal ring. Although weak enzyme-inducing ASMs theoretically also decrease steroid hormones, the clinical effect in the context of hormonal contraception is unclear. In contrast, estrogen-containing methods can increase lamotrigine metabolism through glucuronidation. Despite these important drug interactions, several studies show that many women are not adequately counseled about possible drug interactions between ASMs and contraception. In one academic practice, only 26% of women with epilepsy who were taking a potentially teratogenic ASM had a documented contraceptive method. Of those, approximately half were using a contraceptive method with potential drug interactions with their ASM regimen.27 In another study, 35% of women with epilepsy received contraceptive counseling; those who were counseled about IUDs by their epileptologist were more likely to obtain an IUD, indicating the important role that neurologists play in contraceptive counseling.28 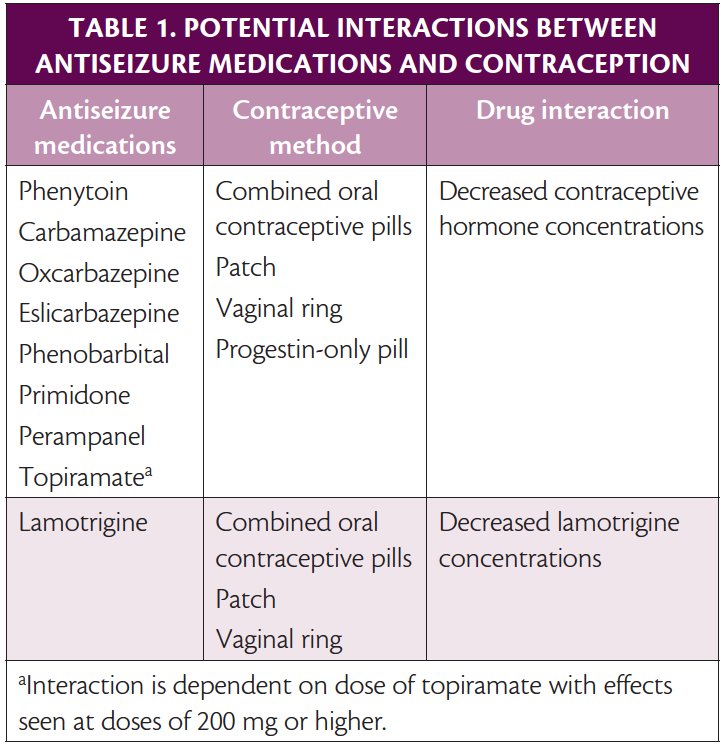 Major congenital malformations (MCMs) are associated with intrauterine ASM exposure (Figure). Neural tube defects occur within the first 3 to 4 weeks of gestation, before many women know they are pregnant.29 Proactive counseling about ASM risks during pregnancy is therefore vital for women with epilepsy with childbearing potential. These risks must be discussed before conception to allow for careful planning to minimize risks to both mother and fetus.

Increasing awareness of ASM-associated MCMs has influenced changes in ASM prescribing.39 Use of valproate is associated with a significantly higher rate of MCMs compared with other ASMs, and lamotrigine, levetiracetam, and oxcarbazepine have been associated with lower rates.40-42 Further studies have also identified valproate-associated cognitive teratogenesis including intellectual disabilities, autism spectrum disorder, and ADHD.36,43,44 The Food and Drug Administration (FDA) and European Medical Agency (EMA) have updated prescribing information, recommending against the use of valproate in women of reproductive potential unless other appropriate therapies have proven ineffective.45,46

Efforts to influence prescription patterns of ASMs to women with epilepsy appear to be reducing MCMs. Recent analysis of the International Registry of Antiepileptic Drugs and Pregnancy (EURAP) from 2000 to 2013 showed significantly fewer valproate and carbamazepine prescriptions and more lamotrigine and levetiracetam prescriptions. During the same period, a 27% reduction in MCMs was seen.47 Valproate prescriptions for nonepileptic conditions to women of reproductive age also appears to be decreasing, although challenges remain for access to ASMs with lower rates of teratogenesis by women with epilepsy in developing countries.48-50

Two-thirds of women with epilepsy remain seizure free during pregnancy, with better seizure control observed among those with generalized epilepsy syndromes and those who are seizure free for at least 9 months before pregnancy.31,51 Fewer than 16% of women experience worsening seizure frequency from first to second or third trimester, which is attributed to physiologic changes in serum ASM concentrations.51 Pregnancy-related changes (eg, increased volume of distribution and renal clearance, reduced serum albumin, and estrogen-induced hepatic induction and glucuronidation) affect ASM pharmacokinetics.52-54 Although certain ASMs, (eg, lamotrigine and levetiracetam) have reduced risk of teratogenesis, these ASMs can also undergo profound serum concentration reduction during pregnancy, the degree of which is variable among individuals.55 The increased metabolism can raise seizure risk, with highest risk increase associated with lamotrigine.51 Serum ASM concentration monitoring has been suggested as a management strategy, although it is yet to be determined whether monitoring improves seizure control.56,57

A tenfold increased risk of maternal mortality is reported in women with epilepsy, primarily attributed to sudden unexpected death in epilepsy (SUDEP) during pregnancy or postpartum.58 The majority of cases are associated with lamotrigine and may be directly related to pregnancy-induced serum concentration reduction. For women who have increased seizures during pregnancy, a higher frequency of bilateral tonic-clonic seizures is associated with cognitive teratogenesis.59 Deterioration in seizure control occurs in women with a 35% or greater reduction in serum ASM concentrations, suggesting that a more significant decline in ASM concentrations may warrant more frequent monitoring.55,60 As pregnancy-related changes resolve within weeks after delivery, ASM concentrations may change, making it essential to have a plan for tapering ASMs back to prepregnancy dose after delivery.55 Failure to do so can result in serious toxicity. These observations highlight not only the need for regular monitoring of serum ASM concentrations before conception, during pregnancy, and throughout the postpartum period, but also the importance of balancing maternal and fetal risks in ASM selection.

Breastfeeding confers multiple benefits on infants and their mothers. Infants who are breastfed receive protection from respiratory tract infections, otitis media, gastrointestinal infections, obesity, and diabetes. Women who report breastfeeding also experience a decreased risk of diabetes, hypertension, and breast and ovarian cancer. The American Academy of Pediatrics recommends exclusive breastfeeding for 6 months and continuation of breastfeeding for 1 year or longer with the addition of complementary foods.61 Despite these recommendations, data from the Centers for Disease Control Pregnancy Risk Assessment Monitoring System indicates that only 69.1% of women with epilepsy breastfeed their infants for any length of time compared with 84.6% of women without epilepsy.22

Several factors determine an infant’s exposure to an ASM in breast milk, including maternal plasma concentrations, timing of breastfeeding, amount of breast milk ingested, and the child’s ability to metabolize medications (Table 2).62,64 The Drugs and Lactation Database is a useful guide to the safety of a drug in breastfeeding dyads.65 The overall benefits of breastfeeding for mothers and infants may outweigh potential risks; individual discussions with patients about their breastfeeding goals in the context of their ASM regimen are important. 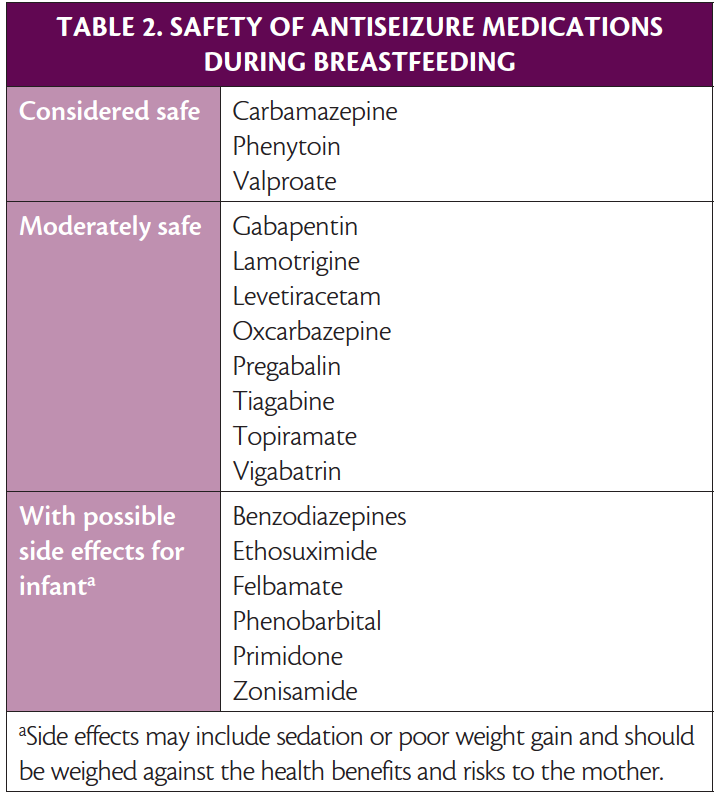 Menopause is associated with seizure worsening for 40% of women with epilepsy, although 27% report improvement, which may indicate hormonal influence on seizures.66 Women with catamenial epilepsy may have a higher rate of seizures during the perimenopause transition, followed by a reduction in seizures after menopause. Estrogen hormone replacement therapy is associated with increased seizure frequency and is not recommended for women with epilepsy.67,68

Menopausal women have an elevated risk for osteopenia and osteoporosis, which is likely further increased in women with epilepsy. Reduced bone density has been observed with both newer and older generation ASMs.69 Women of reproductive age may acquire additional increased risk of bone density loss with use of medroxyprogesterone acetate.70 Vitamin D supplementation may improve bone density in women with epilepsy and has been shown to improve markers of bone density loss (serum calcium, alkaline phosphatase, parathyroid hormone).71 The current recommendation is to take at least 1,200 mg/day of calcium, 800 IU/day of vitamin D, and monitor serum 25-hydroxyvitamin D.

1. Harden CL, Pennell PB.Neuroendocrine considerations in the treatment of men and women with epilepsy. Lancet Neurol. 2013;12(1):72-83.

MJC and JDK report no disclosures.

Department of Obstetrics and Gynecology