An illustrative case and discussion.

Patients diagnosed with a transient ischemic attack (TIA) or ischemic stroke undergo extensive testing to identify a cause for the purpose of optimal secondary stroke prevention. In individuals under age 50 without other risk factors, this work up includes screening for inherited and acquired hypercoagulable disorders (Case).

Ms. P, age 36, who has a known prothrombin 20210A gene (PTG) mutation treated with rivaroxaban, was transferred to the emergency department of a comprehensive stroke center, arriving at 16:54. At her initial presentation in the transferring hospital, she had sudden-onset dysarthria, left hemiplegia, left-sided numbness, left anosognosia, right gaze preference, left facial weakness, and decreased sensation to light touch on the left. Her National Institutes of Health Stroke Scale (NIHSS) score was 19. She has a medical history of hypertension, bipolar disorder, and deep vein thromboses (DVTs)/pulmonary emboli (PEs). Ms. P says she smokes half a pack per day but does not drink or use drugs and had never taken oral contraceptives or estrogen therapy.

Ms. P has a brother and several cousins with a history of DVTs, and her family members and hematologist reported that she had experienced multiple venous thromboemboli (VTE), specifically DVTs and PEs, the first having occurred 18 years ago when she was postpartum. Although she was treated with warfarin, she had numerous DVTs and PEs, and many times the dose of warfarin was subtherapeutic at the time of VTE. A few months before her current presentation, her hematologist switched her therapy to rivaroxaban because of her difficulty achieving a therapeutic state with warfarin, and she had been adherent to treatment.

Ms. P’s findings on initial noncontrast head CT and brain and neck CTA (Figure 1A and B) from the transferring hospital showed an acute large right middle cerebral artery (MCA) infarct and inferior cerebral artery (ICA) occlusion. Her last known normal status was at noon the day she presented.

At the comprehensive stroke center, however, her noncontrast brain CT showed complete right MCA infarction with edema and a new 2-mm leftward midline shift (Figure 1C). Her Alberta Stroke Program Early CT Score (ASPECTS) was 0, and she was considered a poor candidate for mechanical thrombectomy. During CT scanning, Ms. P developed nausea and vomiting but continued to protect her airway.

Over the next 24 hours, Ms. P became somnolent, and her leftward midline shift worsened to 8 mm; she was treated surgically with emergent decompressive hemicraniectomy. Transthoracic echocardiogram (TTE) with contrast showed a right atrial echodensity vs mass and was negative for intracardiac shunting. A CT of Ms. P’s heart showed 2 irregular hypodensities within the inferior aspect of the right atrium just above the inferior vena cava junction, measuring 19 mm2 and 11 mm2, suggesting right atrium intracavitary thrombi (Figure 2). Subacute subsegmental right lower lobe PE were also seen, suggesting chronic PE sequelae. Subtle flattening of the interventricular septum suggested right-sided heart strain. Cardiothoracic surgery was consulted and recommended medical management for Ms. P. A heparin infusion without a bolus was started (without bolus because of her large acute brain infarct and recent craniectomy). Ms. P’s postoperative course was uneventful, and she was eventually discharged to a skilled nursing facility with rehabilitation. 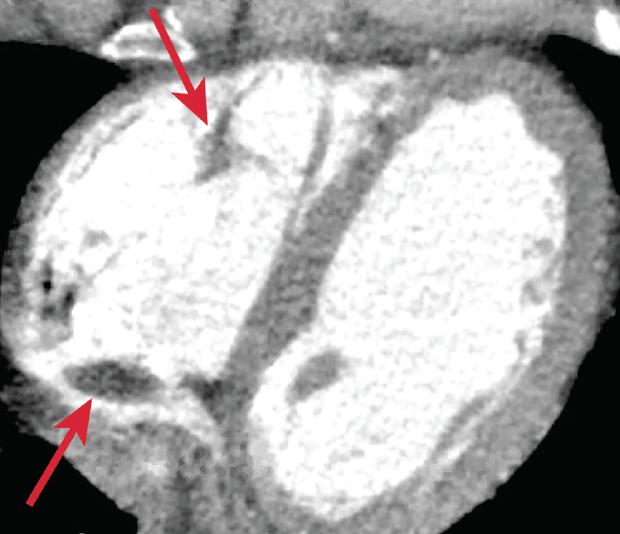 It is important to keep in mind that finding a coagulation disorder in a person with brain ischemia may be coincidental, not causal,1 especially if there is evidence for other possible causes of ischemia.2 It can also be difficult to test for hypercoagulation disorders in the acute setting.

There are other diagnostic tests to consider in this population. If there is clinical suspicion based on history and examination, or if infarcts appear embolic and span multiple vascular territories, and the individual has an intracardiac shunt, peripheral venous duplex ultrasound is recommended. If infarcts appear embolic in the setting of known or suspected valve disease, including endocarditis or hypercoagulability a transesophageal echocardiogram (TEE) should be considered because it offers a better view of posterior cardiac structures. Cardiac CT is noninvasive and can offer comparable diagnostic information as TEE, depending on the indication.

Factor V Leiden (FVL) mutations are the most common inherited hypercoagulable disorder, followed by prothrombin 20210A (PTG) mutation. Others include deficiencies in protein S, protein C, antithrombin, or methylenetetrahydrofolate reductase (MTHFR) mutations associated with hyperhomocysteinemia.3 Antiphospholipid syndrome (APS), an acquired systemic autoimmune disorder will be discussed briefly, but other acquired coagulation disorders and less common disorders such as elevated factor VIII and fibrinogen defects are outside the scope of this article.

Factor V Leiden Mutation. Mutation of FVL at an arginine cleavage site results in protein C that, when activated, does not break down the procoagulant Factor V, causing a hypercoagulable state. The FVL mutation is associated with VTE including cerebral venous sinus thrombosis (CVST).4,5 An association of FVL mutations with arterial thrombosis (eg, myocardial infarction or ischemic stroke) is proposed but controversial6 and likely small if present. Genetic testing for FVL mutations is highly accurate in the inpatient setting. Functional activated protein C (aPC) assays, which may rely on activated partial thromboplastin time (aPTT), however, can be affected by use of direct thrombin inhibitors, factor Xa inhibitors, coexisting lupus anticoagulant (LAC), or other anticoagulants.7

Prothrombin G20210A Mutation. A gain-of-function point mutation in the prothrombin gene causes elevated plasma levels of prothrombin, a precursor for thrombin, resulting in a hypercoagulable state. Although the PTG mutation is an established risk factor for VTE, including CVST,4 its link for arterial and intramural thrombotic disease is less clear,8 especially in the absence of a persistent foramen ovale (PFO). Meta-analyses of case control and/or cohort studies show an association between PTG mutation and increased ischemic stroke risk, especially in children9; however, other high-quality studies refute that association.10,11 Homozygous PTG mutations are less common, result in even higher PT levels, and carry a higher risk of VTE. The presence of both FVL and PTG mutations or use of oral contraceptives can increase VTE risk, including risk of CVST.5 Genetic testing for PTG mutations is performed with PCR or DNA microarray technology3 and is unaltered in the inpatient setting.

Protein C, Protein S, and Antithrombin Deficiencies. Once activated by thrombin, protein C proteolytically degrades procoagulant factors Va and VIIIa, using Protein S as a cofactor.3 Antithrombin inactivates activated thrombin and to a lesser extent, factors IXa, XIa, and XIIa. Thus, a deficiency in these proteins, hereditary or acquired, can result in a hypercoagulable state. Antithrombin, and to a lesser extent, protein C and S deficiencies have been associated with VTE; association with arterial phenomena such as ischemic stroke has not been extensively studied. Small case reports have suggested an association with stroke, but this was not shown in a larger case-control study and there are conflicting results in other prospective studies.1,12,13 Functional assays are used as screening tests, followed by immunologic/antigenic assays if results are abnormal.3 Functional assays, especially when clot based, can be falsely increased by anticoagulants or coexisting LAC or FVL mutations and falsely decreased by elevated factor VIII levels, acute phase reactants, thrombosis, surgery, and liver disease. Low protein S levels can falsely decrease aPC assay results.3 Antigenic assays lack specificity and can be affected by FVL mutation and LACs.3 Because of multiple interactions, inpatient testing is not recommended.

Methylenetetrahydrofolate Reductase Mutation Associated With Hyperhomocysteinemia. Homocysteine is an amino acid that is metabolized to methionine by MTHFR or to cystathionine. Metabolism of homocysteine requires vitamin B12, folate, and vitamin B6 as cofactors. Genetic polymorphisms of the enzymes in these metabolic pathways can cause hyperhomocysteinemia, which has been associated with stroke and cerebrovascular disease.14 Diagnosis of MTHFR hyperhomocysteinemia is made by genetic testing and not affected in the acute setting. It is important to note, however, that although clinical trials have shown safe and effective reduction of homocysteine levels with vitamin supplementation, reduction of stroke risk has not been seen.15

The most common acquired hemophilia, APS is a systemic autoimmune disorder characterized by VTE, arterial thrombosis including ischemic stroke, and/or specific pregnancy complications in the presence of antiphospholipid antibodies (aPL).3 Autoimmune diseases (eg, systemic lupus erythematosus) may cause APS, but it can also occur alone. Antibodies to aPL are directed against phospholipid protein complexes. Clinical and laboratory criteria must be met for APS diagnosis. Laboratory testing includes LAC, IgG, and IgM subclasses of anticardiolipin (aCL) and antiβ2-glycoprotein (GP) antibodies on 2 occasions at least 12 weeks apart. Data to demonstrate definite causality is conflicting, but overwhelming evidence suggests there is an association between aPL antibodies and ischemic stroke in young adults.15

Inpatient laboratory testing is not recommended because it can be confounded by a variety of clinical conditions including acute phase response, thrombosis, drug interactions, and infections.3 Anticoagulants may affect LAC but not aCL or GP antibody testing.

In the setting of thrombotic disorders, acute VTE including stroke due to CVST, should be managed according to guidelines using systemic anticoagulation for at least 3 to 6 months. Prophylactic therapy should be considered during periods of heightened coagulopathy risk (eg, pregnancy, postpartum, and postoperatively). Antiplatelet therapy or moderate-intensity anticoagulation is recommended for individuals with an inherited hypercoagulable disorder and ischemic stroke, but evidence to support this approach is limited to small studies with methodological shortcomings.2 Guidelines recommend antiplatelet therapy for people with aPL who do not meet criteria for APS and consideration of anticoagulant therapy for those with APS and stroke.15 In addition, the guidelines state anticoagulation may be reasonable for individuals with an inherited hypercoagulable disorder who have recurrent ischemic stroke of unexplained etiology. Current recommendations in adults with hyperhomocysteinemia associated with a genetic mutation are supplementation with folate, vitamins B6, and B12 because it is safe even if it may not reduce stroke risk.15

Hereditary hypercoagulable disorders are rare. Despite association of some conditions with ischemic arterial stroke, evidence for causality remains controversial. Screening for prothrombotic conditions is recommended in several current guidelines and is often part of the diagnostic workup for people experiencing ischemic stroke.2 The yield of testing for these disorders is limited in the inpatient setting and may only be useful in some people with acute stroke.

9. Sarecka-Hujar B, Kopyta I, Skrzypek M, Sordyl J. Association between the 20210G: a prothrombin gene polymorphism and arterial ischemic stroke in children and young adults-two meta-analyses of 3586 cases and 6440 control subjects in total. Pediatr Neurol. 2017;69:93-101.