Epilepsy remains challenging to treat with 30% to 35% of cases unresponsive to medical treatment, termed medically refractory epilepsy.1-3 Resective surgery remains an underused highly effective treatment for those who have a single focus for their seizures in noneloquent cortext.4 Neurostimulation is a less invasive treatment option for individuals who are not candidates for resective surgery. In this article, we provide a brief overview of available neuromodulation therapies, including vagal nerve stimulation (VNS), deep brain stimulation (DBS), and responsive neurostimulation (RNS).

In VNS, a cuff electrode is placed over the vagus nerve and is connected to a pulse generator device that is implanted subcutaneously (Figure). The generator is programmed by the physician with a programming wand attached to a computer. Although the same efficacy has been seen with stimulation of the right or left vagus nerve, because the right vagus nerve innervates the sinoatrial node and is considered more prone to cardiac adverse events, the left vagus nerve is preferred. Potential complications of implantation include infection (1.6%) and left vocal cord paralysis (< 1%). Use of VNS to treat epilepsy is approved by the Food and Drug Administration (FDA) for children, age 4 years and up, and adults. See the Table for comparison of VNS to DBS and RNS.5-16

The mechanism of action of VNS is considered multipronged. A direct effect of electric stimulation on brainstem nuclei via the nucleus tractus solitarius modulates thalamocortical activity to cause desynchronization of cerebral rhythms.17 Neurotransmitter assays from the cerebrospinal fluid (CSF) of individuals treated with VNS shows decreased aspartate levels and increased GABA levels, suggesting increased inhibitory transmission by GABA and decreased excitatory transmission by aspartate may also contributed to desynchronization.18 Some researchers have attributed neurostimulation effects to the norepinephrinergic locus coeruleus acting on the piriform cortex to explain the effects of VNS stimulation.19

Within 2 to 4 weeks of device implantation, VNS stimulation is started and is programmed as open loop (programmed periods of stimulation) or closed in addition to open loop. Closed-loop stimulation is available only on newer models and allows for the device to automatically respond with an increase in stimulation if a heart rate increase of 20% or more is detected. Individuals can also activate on demand stimulation with a handheld magnet device.

There are 2 components of VNS programming. The output current, or charge, is the electric stimulation that generates a compound action potential in the vagus nerve. The duty cycle is the amount of time stimulation is delivered in a 24-hour period. The battery life is 4 to 7 years, and the battery is replaced as it nears the end of service.

Side effects can include cough (45%), dyspnea (16%), hoarseness (66%), and pain (17%).5-8 Newer models are MRI compatible in the presence of specific guidelines, whereas older models have an MRI exclusion zone centered around vertebrae C7 through T8. The VNS device should be switched off before MRI to prevent adverse effects. The VNS device can be explanted completely if required, although a long term in situ device may be difficult to remove because of neurofibrosis, in which case the generator can be removed without removing the electrode from the nerve.

Long-term studies show that at 5 years postimplantation, 60% of people treated with VNS have at least a 50% reduction in seizures and 8.5% achieve freedom from seizures for at least 6 months. Improvements in quality of life have also been measured using the Quality of Life in Epilepsy 31-question survey (QOLIE #31).5-8

In DBS for epilepsy, 2 electrodes are placed in the thalamic anterior nucleus, using stereotactic guidance, and secured to the skull (Figure). A cable is tunneled to a subcutaneously implanted generator, and high frequency open loop stimulation is programmed to occur in a scheduled intermittent manner. Bilateral stimulation is required for anticonvulsant effect. In a sham-controlled study, seizure reduction from DBS was shown to be from neurostimulation rather than an insertional effect and reduced seizure frequency for individuals with intractable epilepsy who had not responded to prior VNS or epilepsy surgery (Table).12 Potential complications include implant site infection (12.7% or 30.9%), malpositioning of leads (8.2%), and paresthesia (23.6%). 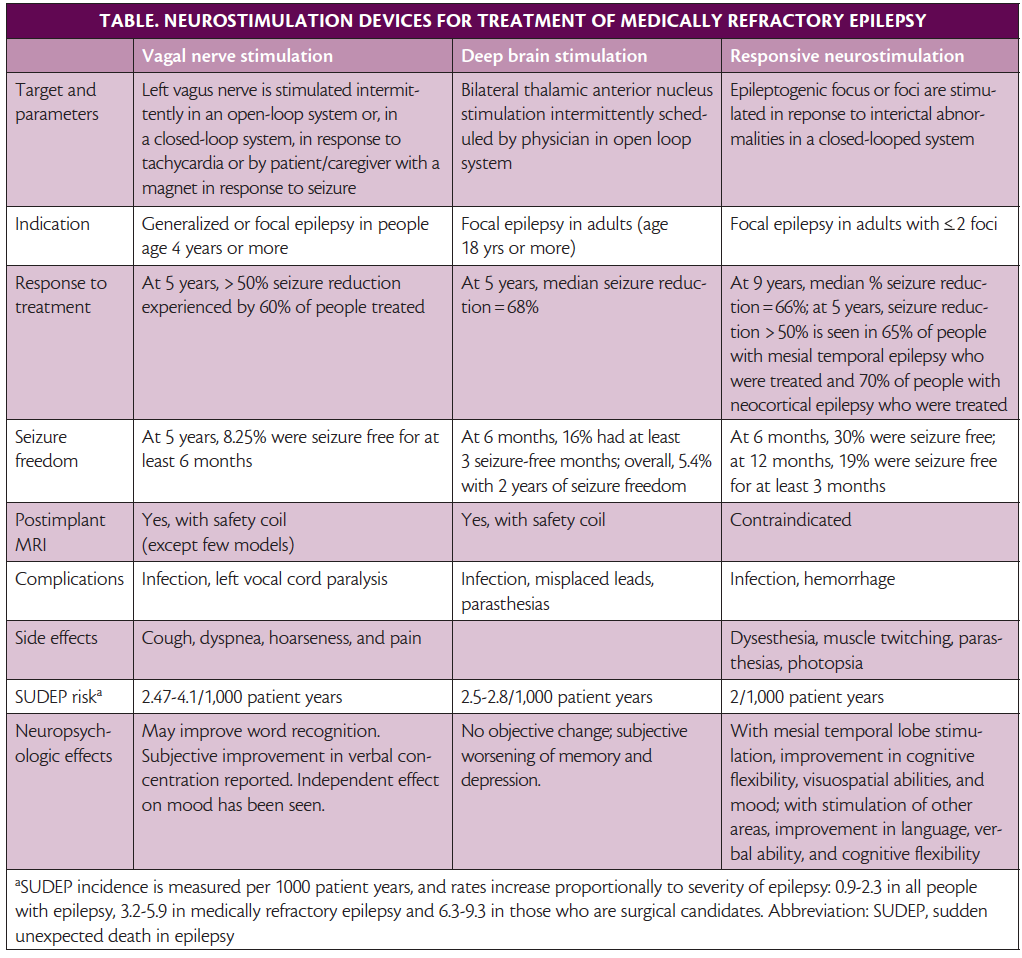 The mechanism of action of DBS can be delineated by anatomic connections, that is, the thalamic nucleus acts as a central relay station to the limbic system, which is closely connected to the hippocampus and extensive areas in neocortex. Lesions of the mammillothalamic tract have an anticonvulsant effects for seizures induced with pentyletetrazol (PTZ),20 and sectioning of mammillothalamic connections, high frequency stimulation, or injection of GABAergic drugs between mammillary bodies and anterior nucleus of thalamus in guinea pigs increased seizure threshold and led to inhibition of generalized seizures produced by PTZ.21,22

Several other locations for DBS to treat epilepsy have been tried, including the centromedian nucleus,23 caudate nucleus,24 subthalamic nucleus, and cerebellum.25 Overstimulation of white matter and direct amygdalohippocampal stimulation12 have also been tried. None of these sites or techniques have been studied in randomized controlled clinical trials to date, however.

In RNS, leads are placed in up to 2 suspected/identified epileptogenic foci, identification of which may require extensive presurgical evaluation. The 2 strip or depth electrodes are connected to a generator placed in the skull (Figure). Complications include infection and hemorrhage with 1.9% of people requiring explant because of infection, and 2.7% experiencing hemorrhage without long-term sequelae.

With RNS, detection of abnormal activity triggers delivery of defined current pulses to defined or all electrodes in a closed loop system. The electrical stimulation effects may be attributed to depolarization blockade, synaptic inhibition, and pathologic network modulation.

The generator is programmed with a wand connected to the computer. All individuals treated with RNS receive a laptop to upload their data in a regular fashion to an internet server accessible to their treating physicians, who select unique electroencephalography (ECOG) patterns as detection settings. These detection settings are initially refined based on ictal rhythms or patient-reported ictal periods to improve sensitivity and specificity. The neurostimulator has a limited memory and usually stores 4 to 8 ECOG epochs of 90 seconds each. Once the detection settings are programmed, stimulation in small increments is started when the preset patterns are detected.

In general, the stimulation is well tolerated except for occasional cases in which implantation was performed on eloquent cortex leading to dysesthesia, paresthesia, photopsia, and muscle twitching. Selecting the correct patient for RNS system is essential for successful outcomes of RNS.

Although RNS is FDA-approved only in adults, case reports of off-label use suggest it may be safe for those less than age 18 years.26 Programming requires time, effort, and adherence by patient and physician. At present, brain MRI is contraindicated with RNS, although it can be explanted if needed. The device also functions as chronic ambulatory ECOG monitor, which can provide insight into subclinical seizures, circadian rhythms, ultradian and behavioral patterns, and effects of adjunctive medications. Continuous ECOG monitoring can also contribute to lateralization of mesial temporal epilepsy paving a way for possible surgical treatment.27-30

After 9 years, median seizure reduction with RNS is 66%, and at 5 years, 65% of those with mesial temporal lobe stimulation and 70% of those with neocortical stimulation have a 50% or more decrease in seizures. At 6 months, 30% of individuals achieved seizure freedom and at 12 months, 19% achieved seizure freedom for at least 3 months. Side effects include dysesthesia, muscle twitching, parasthesias, and photopsia.

Other neurostimulation techniques for treatment of epilepsy are under investigation.

Trigeminal nerve stimulation with numerous indirect connections to various deep brain nuclei and thalamic and cortical network has been investigated as another site of neuromodulation that might control seizure activity, although statistically significant benefits were not observed.31

Neurostimulation provides an exciting new avenue for treatment of people with epilepsy who were previously not considered candidates for surgical resection and whose epilepsy remains refractory to medical management. Efficacy from various modes is not completely known as an effect may be short lived or long lasting. Although there are no direct comparison or head-to-head trials between the various techniques available, each technique has advantages and disadvantages. The decision to use a particular mode of neurostimulation should be made within a multidisciplinary team approach, and multiple techniques can be combined to achieve seizure control.

15. Dasheiff RM. Sudden unexpected death in epilepsy: a series from an epilepsy surgery program and speculation on the relationship to sudden cardiac death. J Clin Neurophysiol. 1991;8(2):216-222.

18. Ben-Menachem E, Hamberger A, Hedner T, et al. Effect of vagus nerve stimulation on amino acids and other metabolites in the CSF of the patient with partial seizures. Epilepsy Res. 1995;20(3):221-227.

VS, MR, and DE report no disclosures.