The etiology of seizure generation and development of epilepsy is complex and not fully understood. Although the vast majority of people with epilepsy do not have a family history of epilepsy, it is likely that genetics plays a key role in both processes. In this article, we focus on genetic architecture of epilepsy as it is currently understood and provide an update of relevant research and how genetics can aid diagnosis and treatment of epilepsy. Table 1 provides a glossary of genetic terms. 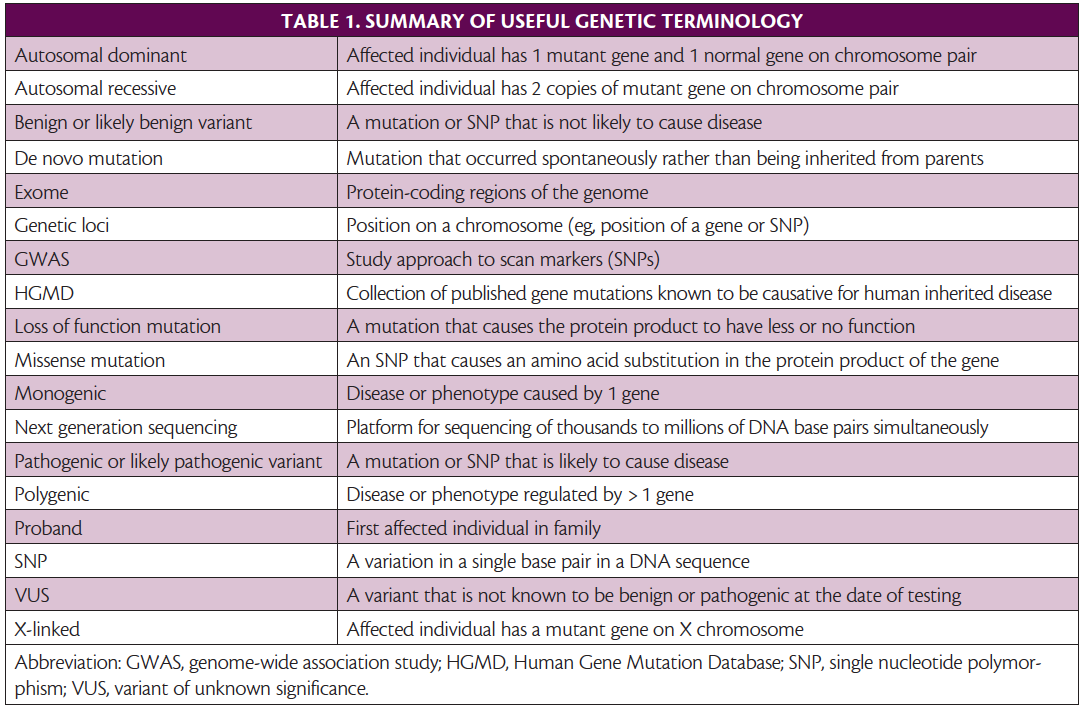 In the past 20 years, genetic studies have started to unravel the complex molecular pathways involved in the epilepsies. Until recently, however, most genetic studies have involved isolated multigenerational families with monogenic disease, or genome-wide association studies in which common single nucleotide polymorphisms (SNPs) were used to find loci associated with an epilepsy. Both types of studies show that most of the epilepsies are not explained by a single gene, but rather multiple genetic loci are involved in the disease etiology.1,2

The recent advances in DNA sequencing technologies (eg, next-generation sequencing [NGS]) have enabled individual sequencing on a large scale, including populations and healthy individuals. These techniques allow the detection of rare variants and de novo mutations. Because de novo mutations are not inherited from parents, sequencing the affected proband and the unaffected parents is a powerful tool to identify de novo mutations likely causing disease.3,4 A genetic diagnosis can provide accurate prognostic information and even enable targeted therapy, depending on genetic mutation found.5

International collaborations and technology developments have made genome-wide association studies in larger cohorts possible. These studies include over 15,000 people with epilepsy and have been used to identify risk variants that have small effect sizes alone but, in aggregate, affect an individual’s predisposition to epilepsy. Although these small-effect risk variants are not used in the clinical setting currently, the future holds the promise of modeling genetic risk score predication tools for epilepsy with these variants.

Only 1% to 2% of the epilepsies are monogenic.6,7 Typically, genes implicated in monogenic epilepsies have an autosomal dominant inheritance pattern, although more rarely, some have autosomal recessive or X-linked inheritance. Mutations causing monogenic epilepsies are often located in the protein coding sequence causing amino acid substitutions (ie, a missense variant) or protein truncation (ie, nonsense, frameshift, deletion, or splicing variant). The direct effect on the encoded protein makes these mutations easier to detect and correlate to a causal effect in the diagnostic setting. Other types of variants, in which a malfunction is usually more difficult to identify, are those that do not cause an amino acid substitution (ie, synonymous variants) or duplications, intronic variants, and variants located in the untranslated regions (UTR) of a gene (3’UTR and 5’UTR). Most monogenic epilepsies are related to genes that encode voltage-gated ion channels, including sodium, potassium, and chloride channels. The most commonly recognized epileptogenic gene is SCN1A, which encodes the voltage-gated sodium channel, Nav1.1a.8 Over 2,000 mutations in SCN1A linked to multiple epilepsies have been described and are known to cause 80% of Dravet’s syndrome, a devastating childhood epilepsy. Examples of genes related to epilepsy, including ion-channel and receptor genes shown to play a role in mainly monogenic epilepsy are listed in Table 2. 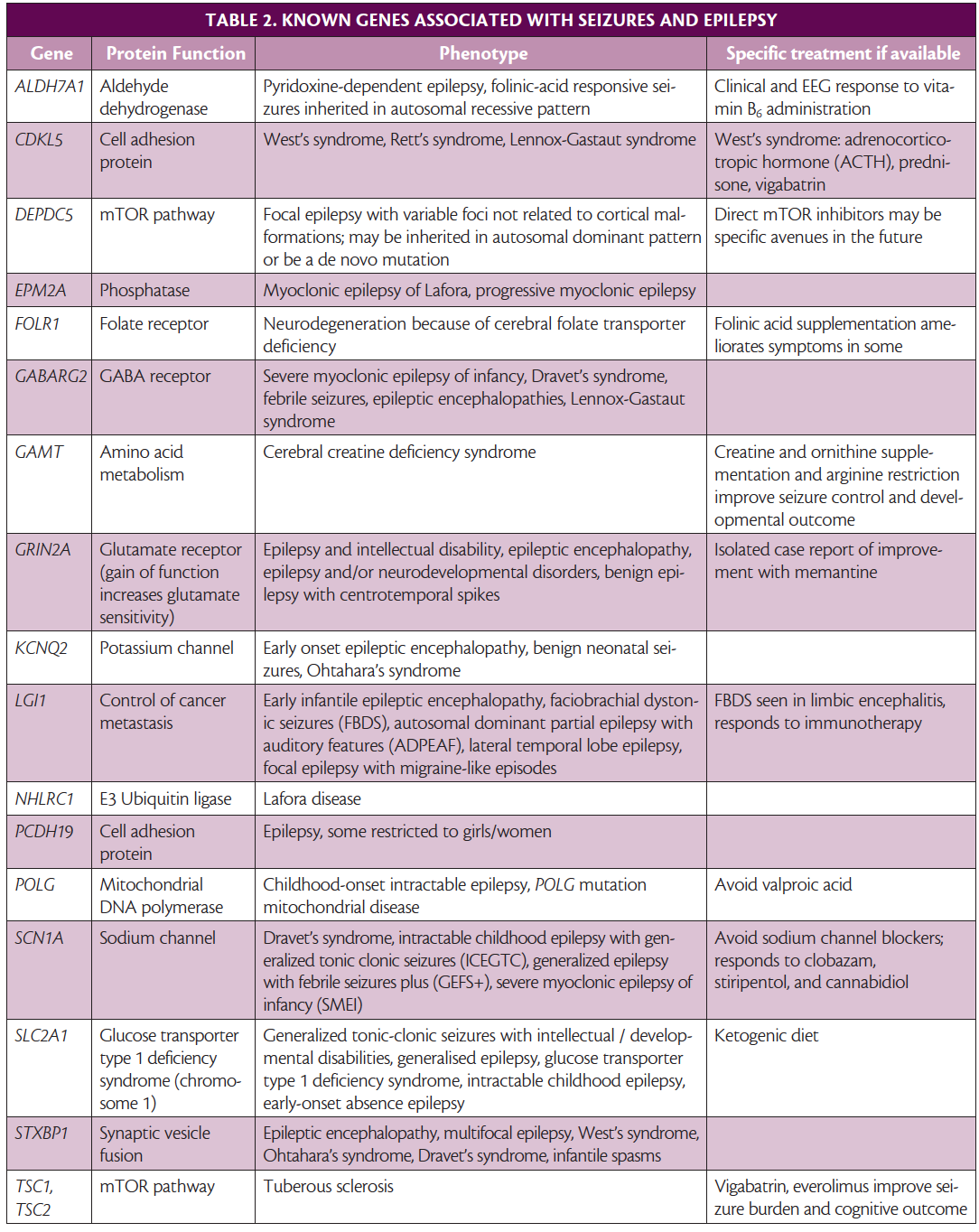 Although more than 750 genes have been reported as associated with epileptic conditions, including infantile spasms and epileptic encephalopathies,9 only a small percentage is likely to be causative for monogenic epilepsy. Some genes listed in the Human Gene Mutation Database (HGMD) as possibly associated with epilepsy do not have a well-established association with epilepsy yet or are associated with diseases in which seizure is not the main phenotype. Many epilepsy genes have incomplete penetrance, which means not every individual carrying the mutation will develop epilepsy. In addition, these genes have heterogeneous expression and phenotypes even within a family with the same genotype.10

Based on family studies, twin studies, and genome-wide association studies, over 30% of the inherited epilepsies can be explained by common variants.2 The mechanisms of how these contribute to epilepsies are not known, however, because these common variants are often outside the protein-coding regions. The most comprehensive genome-wide association study of epilepsies included 15,212 people with epilepsy and 28,677 people without epilepsy, in which 16 genome-wide significant loci were associated with epilepsy. Because of linkage disequilibrium, however, the associated locus is typically large and may include multiple genes. Using a variety of prioritization methods (eg, brain expression, previous reports as monogenic genes, or known regulatory functions), 21 potential epilepsy-related genes within those loci were identified. Similar genes and gene groups are implicated in both monogenic epilepsy and known common variants associated with epilepsy, suggesting shared genetic architecture.11

In a large global consortium of several epilepsy centers, over 9,000 people with and 9,000 people without epilepsy had whole exome sequencing (WES) studies that showed that individuals with epilepsy have an excess of rare variants in genes previously associated with epilepsy.12 It is not uncommon to identify several potentially disease-causing variants in a single individual. In this large WES study, a significant burden of rare variants was seen in genes not previously associated with epilepsies, even in individuals with monogenic epilepsy, suggesting overall polygenic contribution.12

A number of possible mutations and variants can contribute to epileptic encephalopathies, generalized and focal epilepsies, and other types of epilepsies. Genetic testing can sometimes provide individuals with an epileptic encephalopathy or idiopathic medically refractory epilepsy an actionable molecular diagnosis for their condition. For example, identifying a pathogenic SCN1A variant in a person with medically refractory epilepsy can stop presurgical investigations because of concern for an unfavorable outcome. A genetic diagnosis can also steer treating physicians to discontinue long-standing carbamazepine therapy that potentially aggravates epilepsies caused by SCN1A mutations.8,13

Even people with acquired epilepsy from tumors, infections, or trauma may benefit from testing, considering that not every person with tumor/trauma or infection develops epilepsy. Table 2 lists treatments available for known genetic mutations that cause epilepsy.

Many companies offer genetic testing, sometimes with significant discounts because many insurance companies may not reimburse the costs. It is important to choose a laboratory or company that is Clinical Laboratory Improvement Amendments (CLIA) certified (awarded through the Centers for Medicare & Medicaid Services [CMS]) and participates in accreditation and proficiency testing through the College of American Pathologists. Most companies describe what each individual panel tests. For example, there may be an “actionable epilepsy” panel that has a limited number of genes with specific treatments available (Table 2). A company may also offer a comprehensive or all-inclusive panel that includes hundreds of genes. Many companies offer a hotline that can be called for guidance regarding which panel might be more beneficial for a specific individual. Including a genetic counselor in the decision-making process can be helpful.14

Genetic variants are classified into 5 different categories —benign, likely benign, variant of unknown significance (VUS), likely pathogenic, and pathogenic—as specified by the American College of Medical Genetics (ACMG) guidelines.15 Categorizations are made based on variant type, whether it was previously reported in individuals with disease, segregation in the families, de novo occurrence, population prevalence of the variant, potential functional studies performed, predicted effect on protein, location in functional domains, and conservation across species.

Variants classified as benign or likely benign are unlikely to cause disease. These variants are commonly seen in the population, do not change any amino acid in the protein, or are in a repetitive region of the gene. The VUS are variants that do not fulfill criteria for likely benign/benign or likely pathogenic / pathogenic. The VUS may be so rare that there are no previous reports, or it may have been reported previously in affected individuals but did not fully segregate with disease in the family. A VUS may also be classified as such because functional studies are conflicting, or the variant is too common in the general population. Likely pathogenic or pathogenic variants are considered diagnostic and actionable, meaning that if there is a treatment or action to take, the molecular diagnosis supports doing so. It is noteworthy that VUS can potentially become diagnostic if it is detected as de novo, which makes the sequencing of unaffected parents along with a proband recommended.

Detection rates vary widely depending on the type of epilepsy, number of genes tested, and whether the unaffected family members were tested and have results that are helpful for refining classification of variants. Studies showing high detection rates are typically selected for monogenic cases, but an overall detection rate is approximately 20% to 40%.16 In one study, the clinical management changed in 39% of those who received a diagnosis, emphasizing the importance of understanding molecular mechanisms.5

Genetic testing has an increasingly important role in diagnosis and treatment of epilepsy. Approximately 1% to 2% of epilepsies are monogenic and the rest are polygenic, possibly caused by an excess of rare variants in epilepsy-associated genes. Only a small subset of identifiable genetic mutations leads to specific treatments, but in the future we hope to offer personalized treatment to all people with epilepsy. Because a genetic diagnosis has potential life-long effects on individuals and their families it is important to consider involving a genetic counselor early in the decision process for whether or not to obtain genetic testing as well as which test to pursue.

15. Richards S, Aziz N, Bale S, et al. Standards and guidelines for the interpretation of sequence variants: a joint consensus recommendation of the American College of Medical Genetics and Genomics and the Association for Molecular Pathology. Genet Med. 2015;17(5):405-424.

VS reports no disclosures.

EN is a full-time employee of Fulgent Genetics, a commercial genetic testing laboratory.

The New CPT Codes for Video-EEG