Memory complaints in people with epilepsy remain challenging to assess and difficult to treat.

The Challenge of Memory in Epilepsy

Individuals with epilepsy frequently complain of memory impairment. It is challenging to ascertain the degree and nature of memory complaints based only on self or family report, and many factors contribute to this challenge. People with intractable epilepsy are frequently in denial of the severity of their memory impairments and frequently are seen for neuropsychologic testing only at the urging of family and friends. Correlations between self-reported complaints and neuropsychologic test results are low. Frequently, people who report no or minimal memory problems perform poorly on certain neuropsychologic tests, whereas patients with multiple memory complaints might perform at, or above average levels recorded for typical people of the same age and education.

A number of studies indicate that some memory impairment can precede the diagnosis of epilepsy.2-5 A study assessed 155 people with a newly diagnosed and untreated seizure disorder without known neuropathology with a battery of neuropsychologic testing.5 After adjusting for age, sex, and education, people with newly diagnosed epilepsy had worse performance on a finger-tapping task with the dominant hand, poor motor speed on the Adult Memory and Information Processing Battery, poor word recall on the Rey Auditory Verbal Learning Test, and poor story recall. Performance did not significantly differ among those with partial vs generalized vs unclassified epilepsy. These results are consistent with prior studies2-4; however, in all studies, some individuals had experienced 1 or more generalized tonic-clonic seizures before neuropsychologic testing. Although, at the time of diagnosis, people with epilepsy have been shown to exhibit negative mood and anxiety,6 which could contribute to some of the memory deficits observed, 2 studies found no relationship between mood and neuropsychologic test results.5,6 Although patients with abnormal brain imaging findings were excluded in these studies, it is unclear if EEG findings were present prior to neuropsychologic testing.

People with epilepsy frequently have interictal discharges (IED) or epileptic sharp or spike and slow waves seen on EEG. These pathological discharges are frequently seen in-between seizures and occur in and around the seizure-onset zone. An IED is a large synchronous burst of neuronal activity thought to be preceded by a paroxysmal depolarization shift (PDS) related to α-amino-3-hydroxy-5-methyl-4-isoxazolepropionic acid receptor (AMPA)- and N-methyl-D-aspartate (NMDA) channel-mediated calcium conductance.7-9 A following hyperpolarization phase, or the after-going slow wave, is thought to be mediated by GABA.10 Although IEDs are classically considered asymptomatic, there is some evidence they are related to brief lapses in cognitive function.11-18 The term transient cognitive impairment (TCI) was created to explain the correlation with lapses of cognition during IED seen on EEG.19 Although earlier work correlated longer generalized 3-Hz spike and slow wave discharges to memory impairment, especially in children and young adults,19,20 IEDs can be shorter in duration and focal in origin and location. The impairments related to focal IEDs appear to be related to duration and location.11,12,21,22

Most work on the relationship between IEDs and memory processing has been performed with scalp EEG,19,23,24 which has spatial limitations when it comes to understanding how deeper brain structures initiating an IED interact with hippocampal memory processes. More recent work in people with intractable epilepsy using intracranial EEG (ie, implanted depth or subdural grid electrodes) has begun to show a clearer picture of the connection between hippocampal cognitive processes and IED impairments.11,12,22 The occurrence of IEDs recorded with intracranial electrodes correlates with impaired working memory performance and delayed free-recall tasks.12,22,25 When IEDs occurred outside a left-hemispheric seizure-onset zone, memory encoding and word retrieval was affected; in contrast, IEDs occurring inside the seizure-onset zone did not affect memory or word retrieval.11 A study of 10 patients who had intracranial implanted EEG showed that right-sided hippocampal discharges significantly reduced memory retrieval in a working memory task, but not memory encoding.22 Although these studies show correlations between IEDs and behavior, it remains unknown why IEDs are indicative of such impairments.

Invasive intracranial EEG recording has allowed significant insights into memory processing and sleep.26-28 Preliminary research from our own laboratory using intracranial EEG with implanted depth electrodes in people with intractable epilepsy suggests bilateral hippocampal IEDs can cause TCI by modulating single-neuron activity of putative inhibitory interneurons. Behaviorally, the occurrence of hippocampal IEDs was accompanied by a disruption in recognizing familiar images only if they occurred up to 2 seconds prior to stimulus onset. This is the first time the mechanism of TCI has been studied in humans at the single-neuron level. In conclusion, EEG abnormalities such as generalized spike and slow wave and focal IEDs can be responsible for causing impairment in cognitive processes. The type of impairment depends on the type (generalized vs focal), location (inside vs outside seizure-onset zone or neocortical vs hippocampal), and duration of the IED.

Much of our knowledge regarding memory impairments in intractable epilepsy comes from preoperative and postoperative neuropsychologic testing of people being considered for surgery to treat intractable mesial temporal lobe epilepsy. Deficits in visuospatial or verbal memory measured with traditional neuropsychologic testing can help localize dominant or nondominant hemisphere dysfunction.29,30 Hippocampal volume loss (observed on postoperative histopathologic analysis and preoperative functional imaging, or both) has been correlated with verbal memory loss seen in people with dominant hemispheric temporal lobe epilepsy.31,32 Unfortunately, postoperative memory decline is greatest in individuals with higher verbal memory scores on presurgical evaluation.33

The reliability of visual memory deficits as a distinct sign of nondominant hemispheric dysfunction is more complex.34 This is related to visuospatial memory processing in people with chronic mesial temporal lobe epilepsy and the global dysfunction associated with the disease. In some patients intracarotid amobarbital testing (also known as WADA testing) may be needed to confirm lateralization of language and memory and predict postoperative memory change in individuals undergoing mesial temporal lobe resection.35

One of the many questions frequently asked by people with chronic epilepsy is if their memory impairments will worsen as their epilepsy progresses (Box). Could the effects of interictal activity, seizures, and medications predispose a person to long-term memory impairment? Independent cross-sectional studies of global cognitive function in people with chronic mesial temporal lobe epilepsy show the answer is yes.36 The first study investigating the possibility of worsening cognitive decline in 78 people with unilateral mesial temporal lobe intractable epilepsy found a negative correlation with duration of epilepsy and a difference between scores on the Wechsler Adult Intelligence Scale-Revised (WAIS-R) and the estimated passive vocabulary intelligence test (Mehrfachwal-Wortschatz-Test Part B [MWT-B]) that could not be attributed to aging alone. Multiple regression analysis found that age, sex, education, and age at epilepsy onset did not contribute to the variance observed between the test scores. In a much larger study, the same group investigated the Full-Scale Intelligence Quotient (FS-IQ) in 209 people with intractable mesial temporal lobe epilepsy. The study examined multiple covariates including age, sex, mono- and polytherapy with ASM, duration of epilepsy, age of onset, medication levels, and level of education. Epilepsy duration was the only factor to reach statistical significance. Individuals who had epilepsy for more than 30 years performed worse on FS-IQ compared with those who had epilepsy for less than 30 years. For individuals with a higher level of education, FS-IQ scores remained stable for longer periods of epilepsy, compared with those who had less education. It has been suggested that the decline in cognitive functioning in people with more than 30 years of epilepsy might be related to ongoing hippocampal neuronal loss and loss of hippocampal volume.37-41 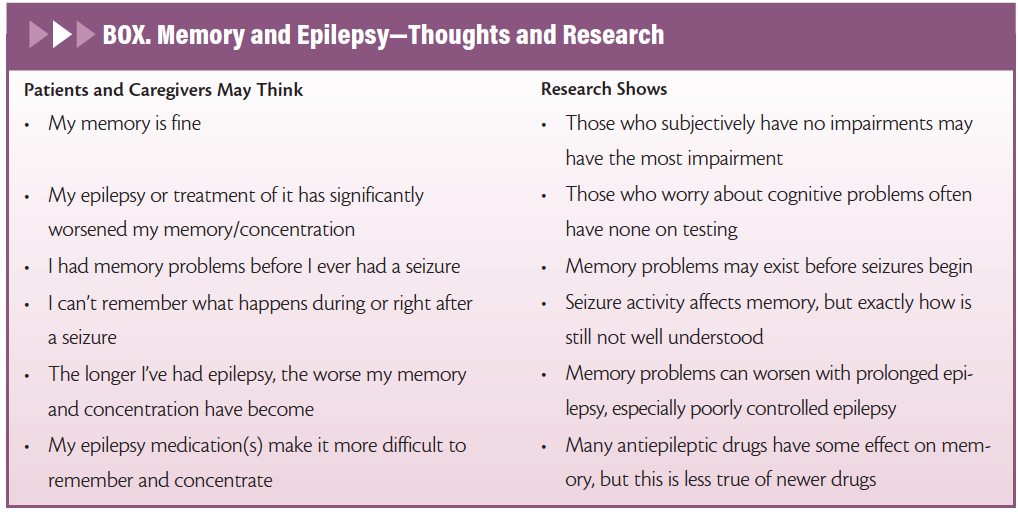 Antiseizure medications are commonly used to control seizures in patients with epilepsy and are effective for approximately 64% of people epilepsy. Often people with epilepsy skip doses, primarily because of side effects.42 Daytime drowsiness and dizziness are among the common complaints associated with ASM. These medications can also affect attention and concentration, which could indirectly affect memory processing.43 Patients on ASM monotherapy have been shown to perform worse compared with those taking no medication on attention, memory, language, motor speed, reading speed, subjective behavioral, and neurophysiologic tests.43-45

Although some newer ASMs have fewer cognitive adverse effects compared with the older ones,45 many people with medically refractory epilepsy are frequently on polytherapy, which can have a significant deleterious effect on attention, executive function, and memory.46

Memory-related complaints and deficits are a common contributor to poor quality of life in people with epilepsy, especially intractable temporal lobe epilepsy. This shouldn’t be surprising since the hippocampus and amygdala, which are involved in memory processes, are also central to epileptogenesis. In recent years significant progress has been made using functional brain imaging and intracranial EEG to understand the mechanism of seizure generation48,49 and memory processing in humans.50-52 Despite these advancements, as yet there are no therapies to improve memory in people with epilepsy; managing comorbid conditions such as mood disorders or switching to newer antiseizure medications may be helpful for some. Other fortunate individuals may find a surgical cure for chronic seizures to be an ideal remedy for
memory complaints.53

There is emerging evidence that treatment with brain stimulation may also help address memory concerns in people with chronic epilepsy. In a recent study of 10 people with epilepsy, transcranial direct current cathodal stimulation resulted in a 56.2% improvement in working memory and a decrease in seizure frequency when applied directly to the seizure onset zone. This study did not have a control group, however, so a placebo effect cannot be ruled out.54 Transmagnetic stimulation has had mixed results in enhancing memory in people with chronic epilepsy.55-57 Chronic intracranial stimulation using deep brain stimulation (DBS) of the thalamic anterior nucleus or responsive neurostimulation (RNS) of either bilateral hippocampi or to the ipsilateral to the seizure onset zone has shown promising results.58-62 It is unclear, however, if these improvements could be related to the improvements in mood or better seizure control. In contrast to chronic brain stimulation, which aims to improve memory over a long period of time, task-related acute stimulation aims to enhance task-specific memory.63,64 The latter provides an interesting therapeutic option for memory enhancement for those with epilepsy in which a person with epilepsy uses a magnet to provide closed-loop stimulation before a particular task to facilitate recall of the task at a later date.

Memory impairments are a common complaint for people with chronic intractable epilepsy. Medications, psychosocial comorbidities, IEDs, and the pathologic disturbances caused by seizures are believed to contribute to the impairments. Some of these cognitive problems can precede epilepsy diagnosis and worsen as the disease progresses. Recent studies on memory enhancement using extracranial and intracranial acute or chronic brain stimulation show promise. Until then, neurologists can help people with memory complaints by switching to medications with fewer side effects or treating comorbid mood disorders.

50. Rutishauser U, Mamelak AN, Schuman EM. Single-trial learning of novel stimuli by individual neurons of the human hippocampus-amygdala complex. Neuron. 2006;49(6):805-813.

51. Rutishauser U, Schuman EM, Mamelak AN. Activity of human hippocampal and amygdala neurons during retrieval of declarative memories. Proc Natl Acad Sci U S A. 2008;105(1):329-334.